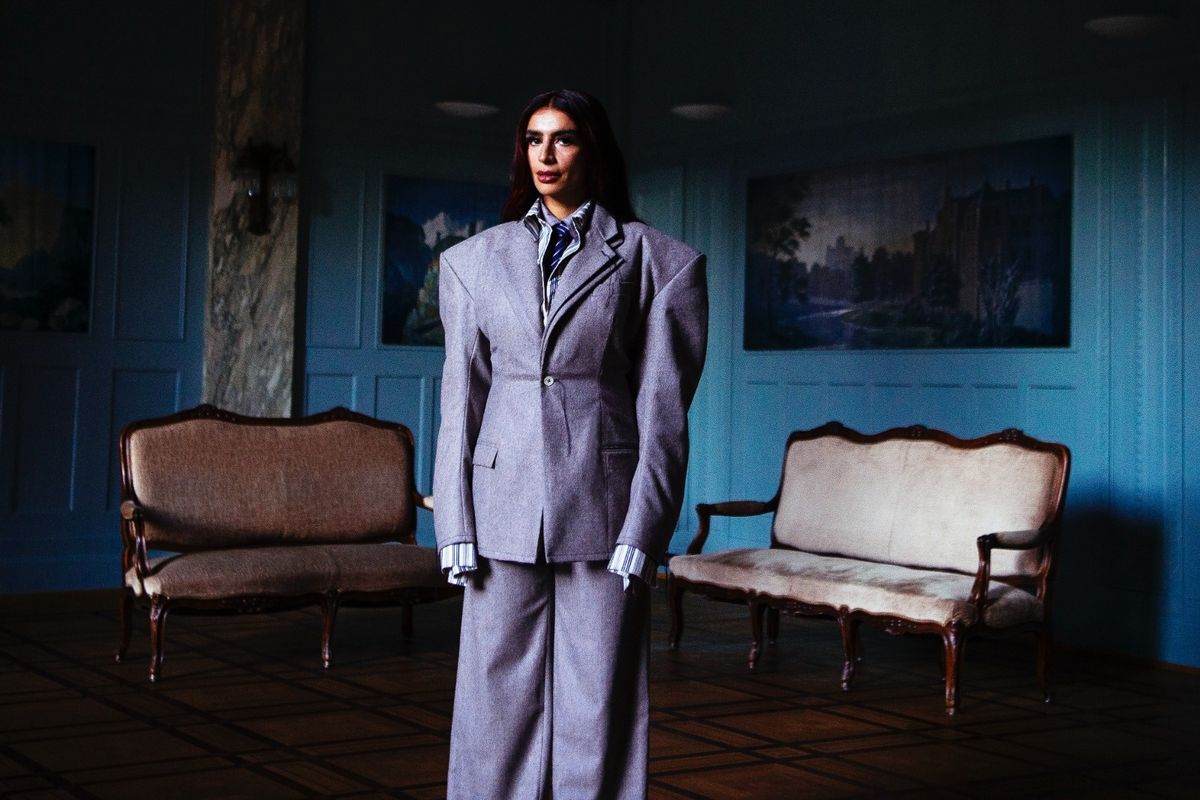 On "Habibi," the newest single from Sevdaliza, the Iranian-Dutch artist repeats with vocoded dread, "No one understands me," before questioning, "Is there anyone out there to get me out of my head?" This stunning, stark piano ballad appears on her sophomore album, Shabrang, and echoes an entire tracklist of existential meditation — one that sees Sevdaliza walk directly into darkness in order to reclaim her strength and redefine her identity. (The music video's shocking opening scene of her holding a gun to a dog's head is symbolic of Sevdaliza killing her inner demons.)

To celebrate Shabrang's late summer release, Sevdaliza performed a rare live show on August 31 at the historic Royal Theatre in The Hague in the Netherlands. The production was streamed globally, bringing to life all the project's complex layers — and costuming naturally helped to amplify her story. Styled by Imru Asha, one standout look was created custom with Amsterdam's Ninamounah in order to exaggerate the performer's rediscovered power. Of course, a tailored suit is the ultimate social symbol of authority, so what happens when you make all its defining features a little bit bigger?

"Sevdaliza was really putting focus on her vulnerability and the hardships she experienced in becoming 'Sevdaliza' on this album, so we wanted to emphasize the strength and power of her as an artist," says Ninamounah, comprised of Designer Ninamounah Langestraat and Brand Director Robin Burggraaf. They pulled inspiration from an oversized coat in their Fall 2020 collection, and built off its "rounded motor sleeve and straight, powerful fit" to construct a full grey suit with extreme shoulder pads and a boxy silhouette. For Ninamounah, this look portrayed Sevdaliza "as the strongest version of herself."

Related | These Penis and Vagina Bags Are Really Something

The fabrics used to create Sevdaliza's costume were all deadstock virgin wool, "otherwise destined for landfill or destruction," according to Ninamounah. She even wore the brand's classic square toe heel, made entirely of uncycled vintage leather, on stage. "It's really important to us to work with material that doesn't put an extra strain on the environment," Ninamounah says, underscoring an ethos of equality that impacts all their decision-making ("I do not believe in this line between humans and animals," Langestraat previously told PAPER).

Sevdaliza's black-and-white "Habibi" visual introduced the artist's directorial partnership with Russian filmmaker Anastasia Konovalova, sevda+ana. This type of independence and control over her craft is what drew Ninamounah to working with Sevdaliza, who even released Shabrang through her own label, Twisted Elegance. "We appreciate this even more as we're also an independent brand," Ninamounah says, adding that they share the same values. "We put emphasis on our artistry instead of on our sales."

They continue, saying they love Sevdaliza "because she's one of the most sincere artists of our time. Her artistry is so close to her heart. Everything she produces is a natural extension of her as a human being." There's certainly synergy between the brand, which always looks to make larger sociopolitical statements with its clothes, and Sevdaliza, whose music on this album is an enlightening lens into the human psyche. "My smile is a rifle," she posted on Instagram, wearing Ninamounah's suit with a machine gun-shaped microphone pointed directly at her head.