A model covered in cascading snakeskin opened Ninamounah's show at Amsterdam Fashion Week. The scaly, beige strips were all hand-sewn into a jumpsuit and shimmered like glitter in the light of Nieuwe Kerk, a 15th century church with dramatic mahogany pews and towering stained glass windows. Sounds of heavy breathing filled the space like an animal under pressure, before a soundtrack of eerie, swirling synths set the rising Dutch label's fifth collection in motion.

Last season, Designer Ninamounah Langestraat and Brand Director Robin Burggraaf pulled inspiration from the relationship between humans and their tamed animals — the way, for example, you must break a horse in order for it to obey your commands. This time, the duo continued their exploration of nature by zeroing in on metamorphosis — the complex ways we've all mutated throughout history, beginning with larva and developing further from there.

The looks spoke directly to these ideas, with hair that appeared shiny and wet, as if models had emerged from a slimy cocoon backstage. Nails, by Frédérique Olthuis, were crafted from solidified hot glue, and looked to be dripping down to the church floor. Some wore dried butterfly and dragonfly wings on their lashes, and others had sharp rose thorns lining their lids. Live snails were coddled like precious diamonds, and Ninamounah created actual purses in the shape of shells. Heels took the form of hooves, and square-toe boxes were separated like they'd undergone mitosis.

Ninamounah's silhouettes doubled down on the tailoring they've prioritized since launching, all constructed in shades of the earth (browns, beiges, blacks). Impeccably built suits with strong shoulders and straight legs were juxtaposed with swathes of fabric hung across the chest. Leather coats and sheer dresses balanced each other out, visualizing the shifts between vulnerability and protection throughout metamorphosis. One look — a navy blue tricot bodysuit with wing-like arms — swam on the runway like a creature pulled from the ocean floor. 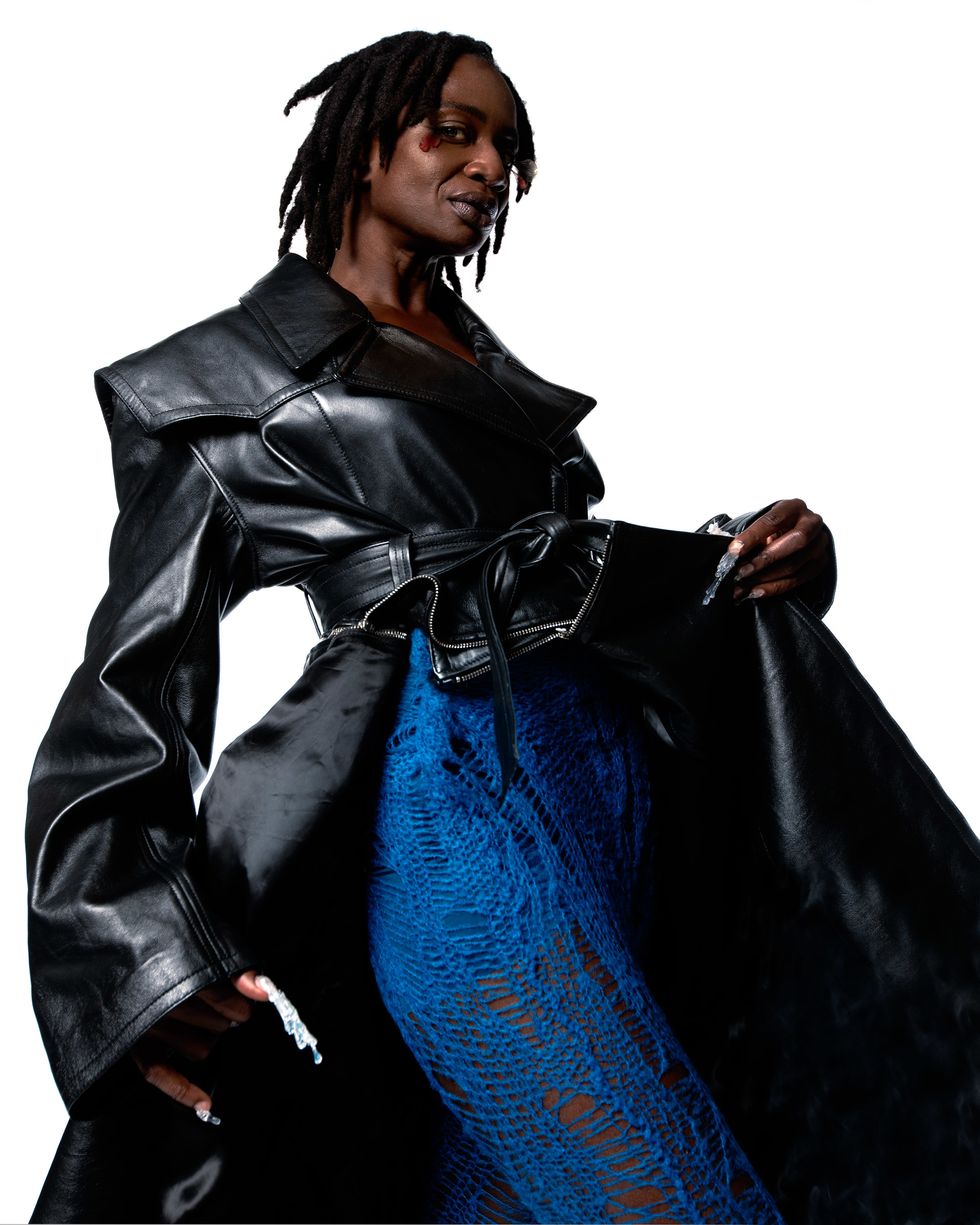 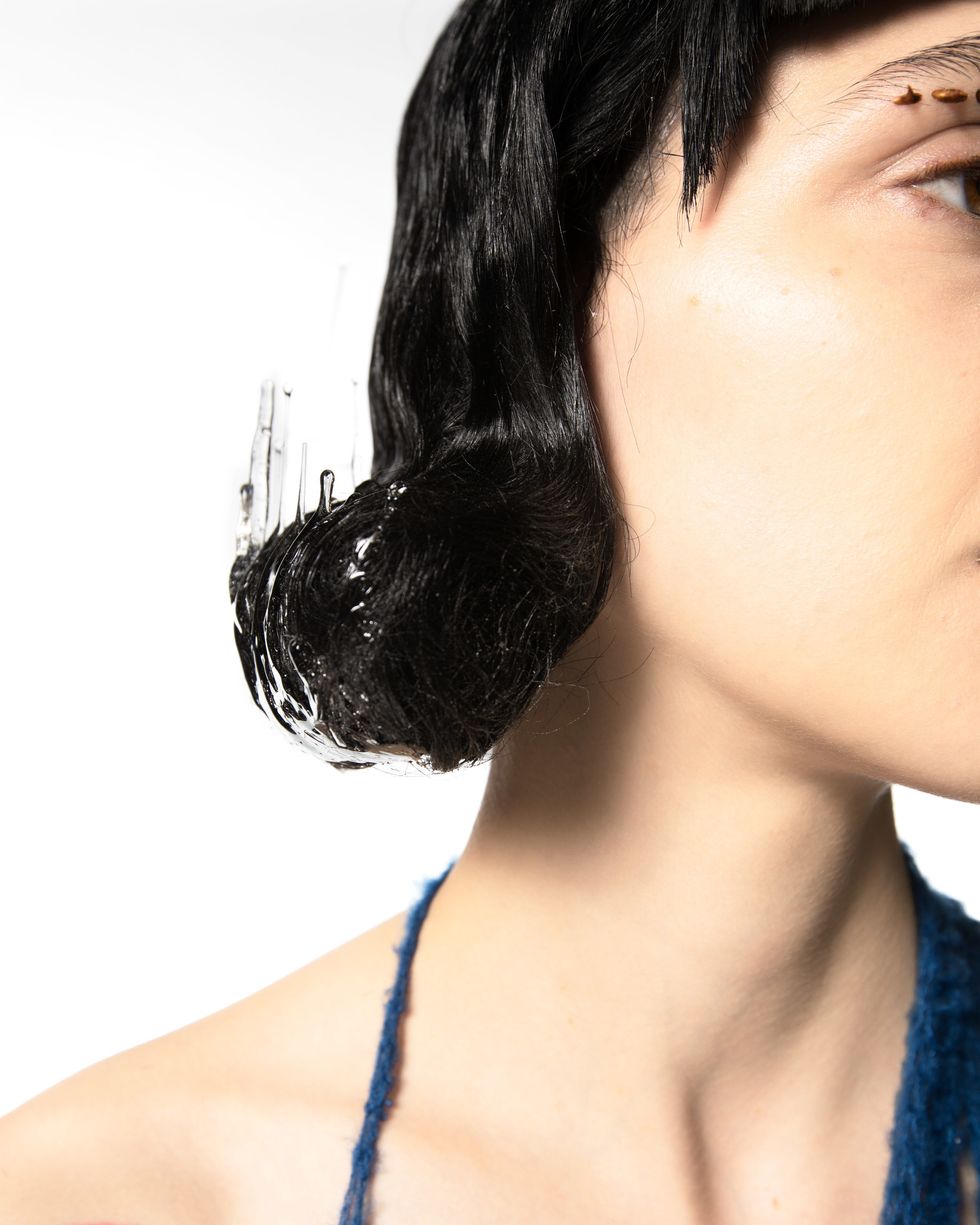 Your brand has always explored the relationship between animals and humans, blurring the line between the two. How do you think this collection continued that conversation?

Ninamounah Langestraat: I do not believe in this line between humans and animals, humans are animals. It's interesting, humans see themselves as fallen angels but in reality we are climbed up monkeys. This was also why the show venue was fascinating to me. Normally we work with hard clashes: opposites in material, shape, human and non human. This collection is a transmutation of all this — a rebirth.

Robin Burggraaf: In our previous work, we worked with extreme concepts: untamed beasts in restrictive tailored suits. Opposing energies, to confront people with their view on cultured nature. The first part of the Metamorphosis collection envisions our world in an in-between state — an intuitive state of subconsciousness, cells developing at their fastest. A state where everything is possible, when the embryo isn't fully formed yet and an organism is both past and future. This collection saw our vision of hybrid beings come to live, and gave an inside view of the cocoon. 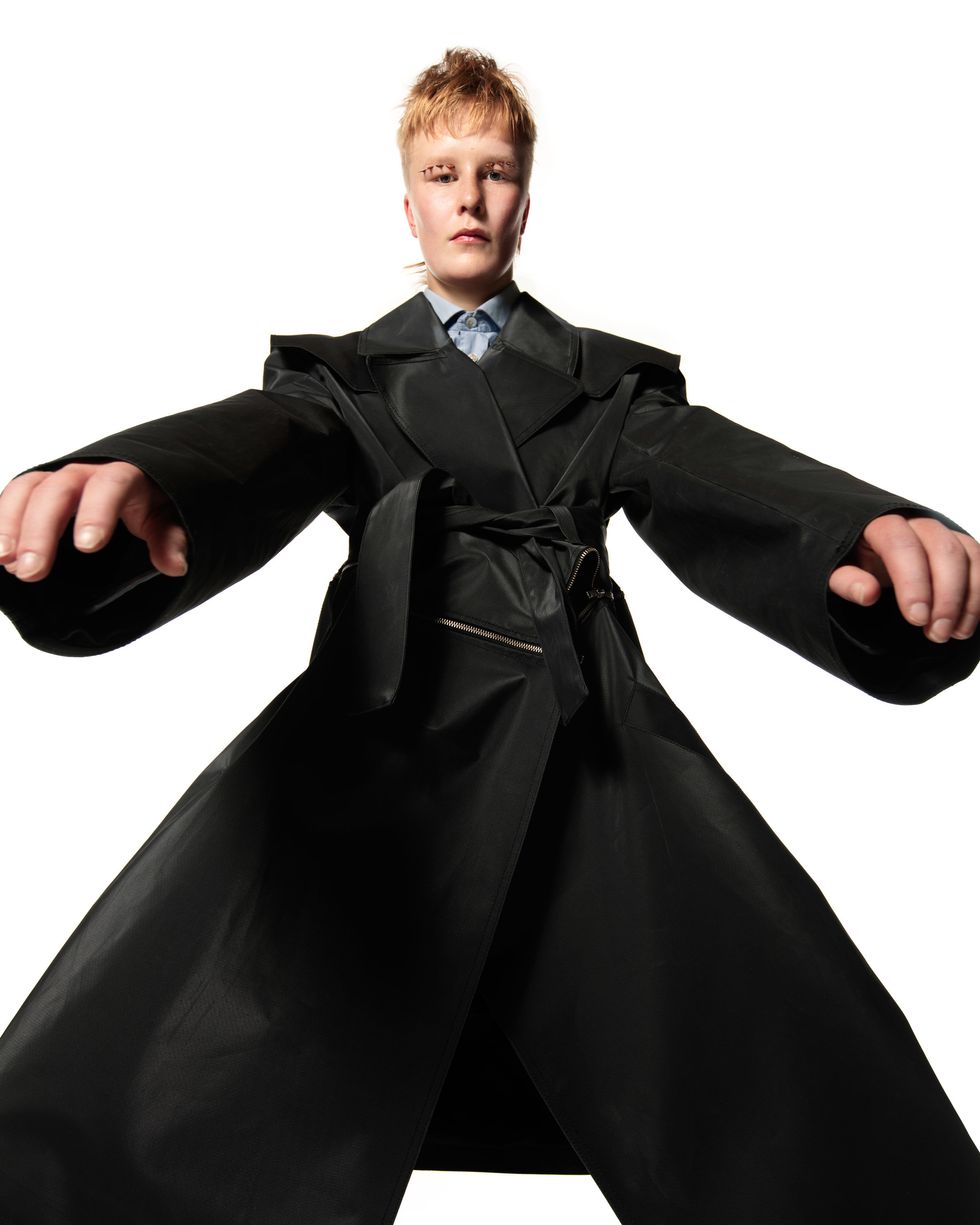 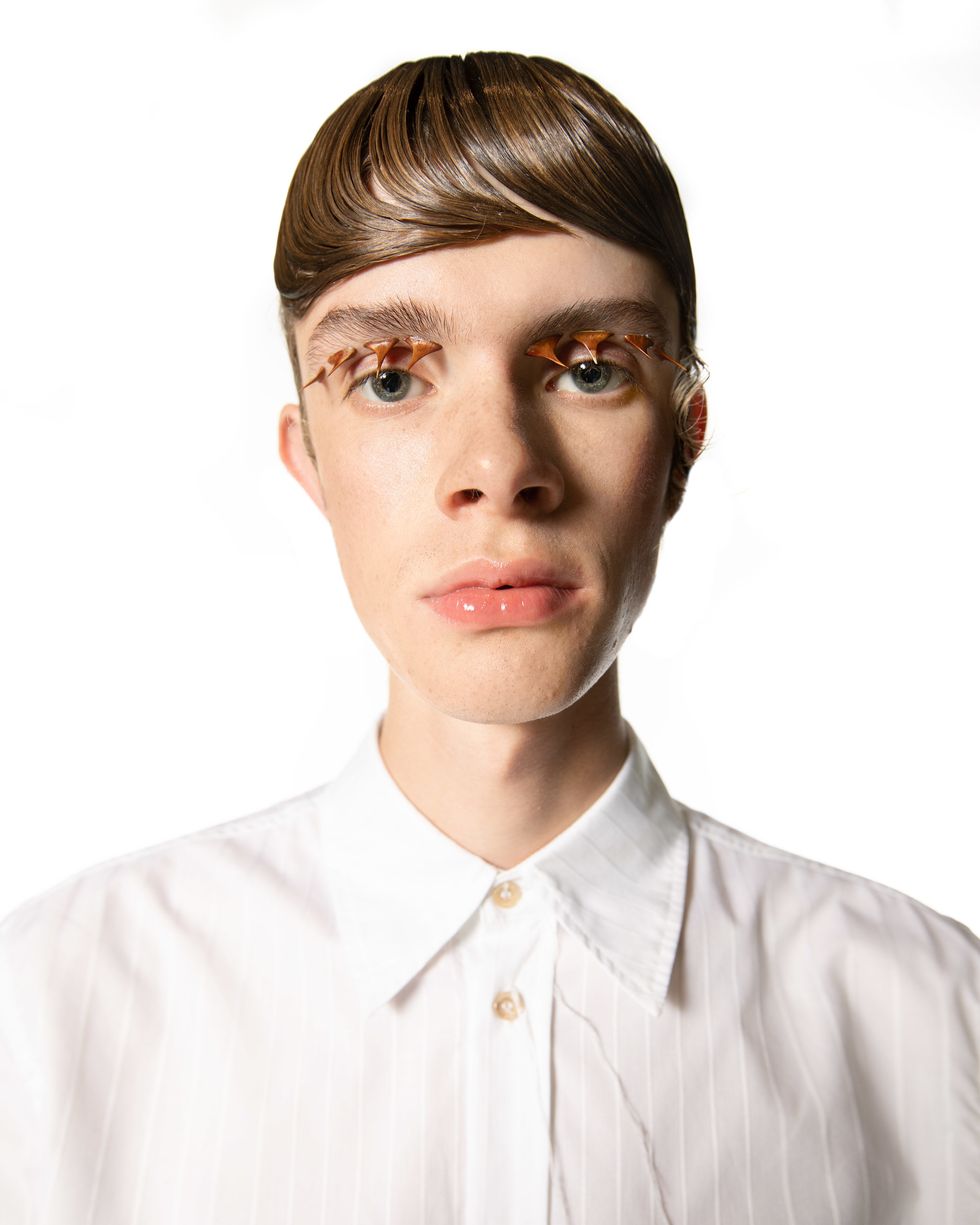 Last season saw you focus on western style and power dynamics, while this collection focused more on metamorphosis — creatures in the process of development. Why did this interest you?

NL: Evolution was about domination of nature. The highest rule of nature, the food chain. This collection is more focused on the balance within. My obsession with nature, where everything has a reason, a purpose. From the beginning to the end. This collection was a love letter to the hybrids, the trans animals. Like snails, for example. The sexy secrets of nature.

RB: Our work is always a progression of the season before. It ages with us, as we mature ourselves. Our work is often interpreted as gender-fluid or gender-neutral, but our message is that gender, age, skin-color or background is besides the point. We want to liberate people from shame, and to embrace themselves as complex, hybrid beings. The in-between state of metamorphosis is a beautiful greyzone where discrepancies in sex and past/future do not have to be solved, they're simply there and they are beautiful. The gender debate is also a trend, and trends are a byproduct of shame — being afraid to not fit in. We stand for a personal relationship, following your own development and life process. 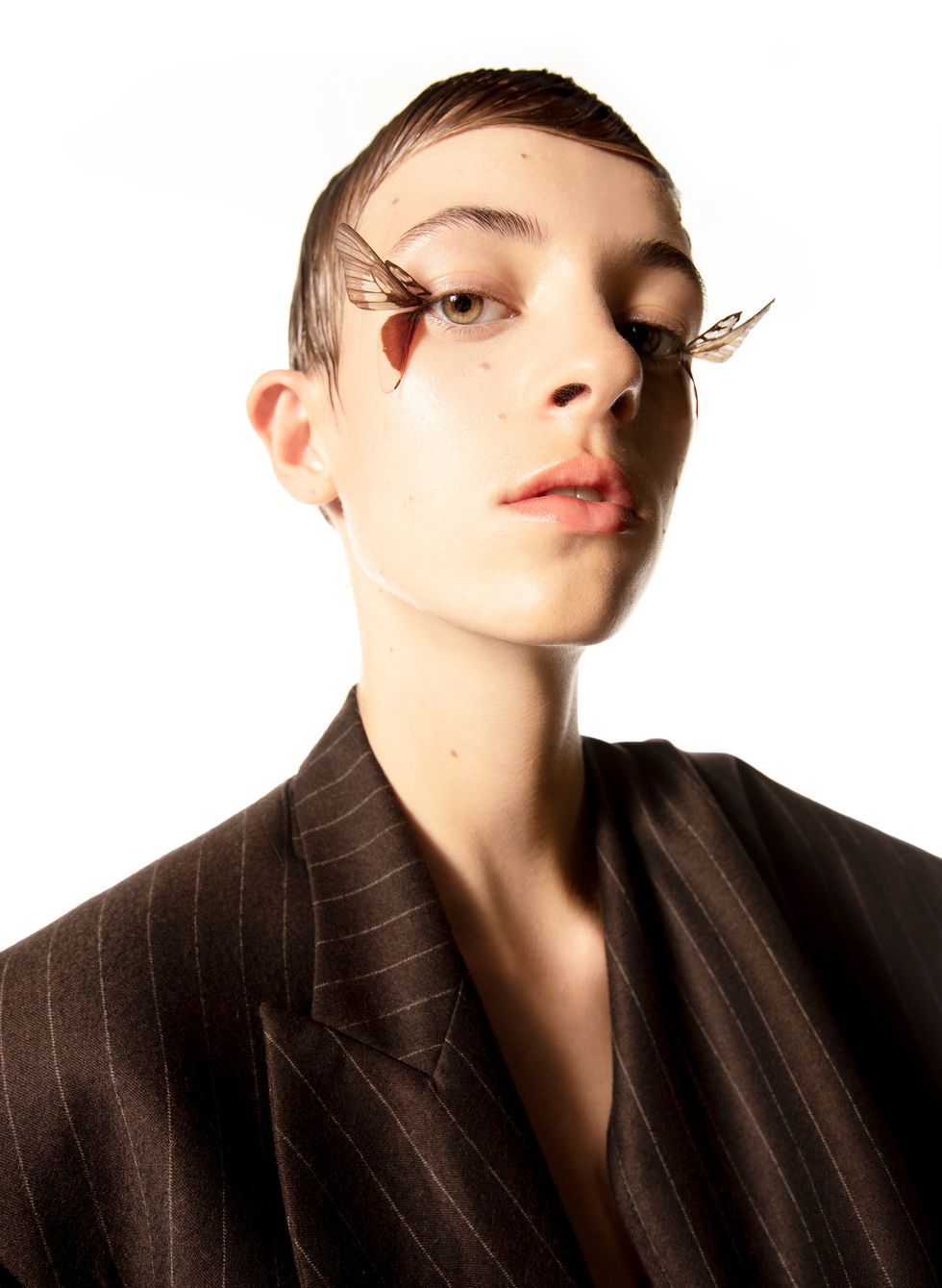 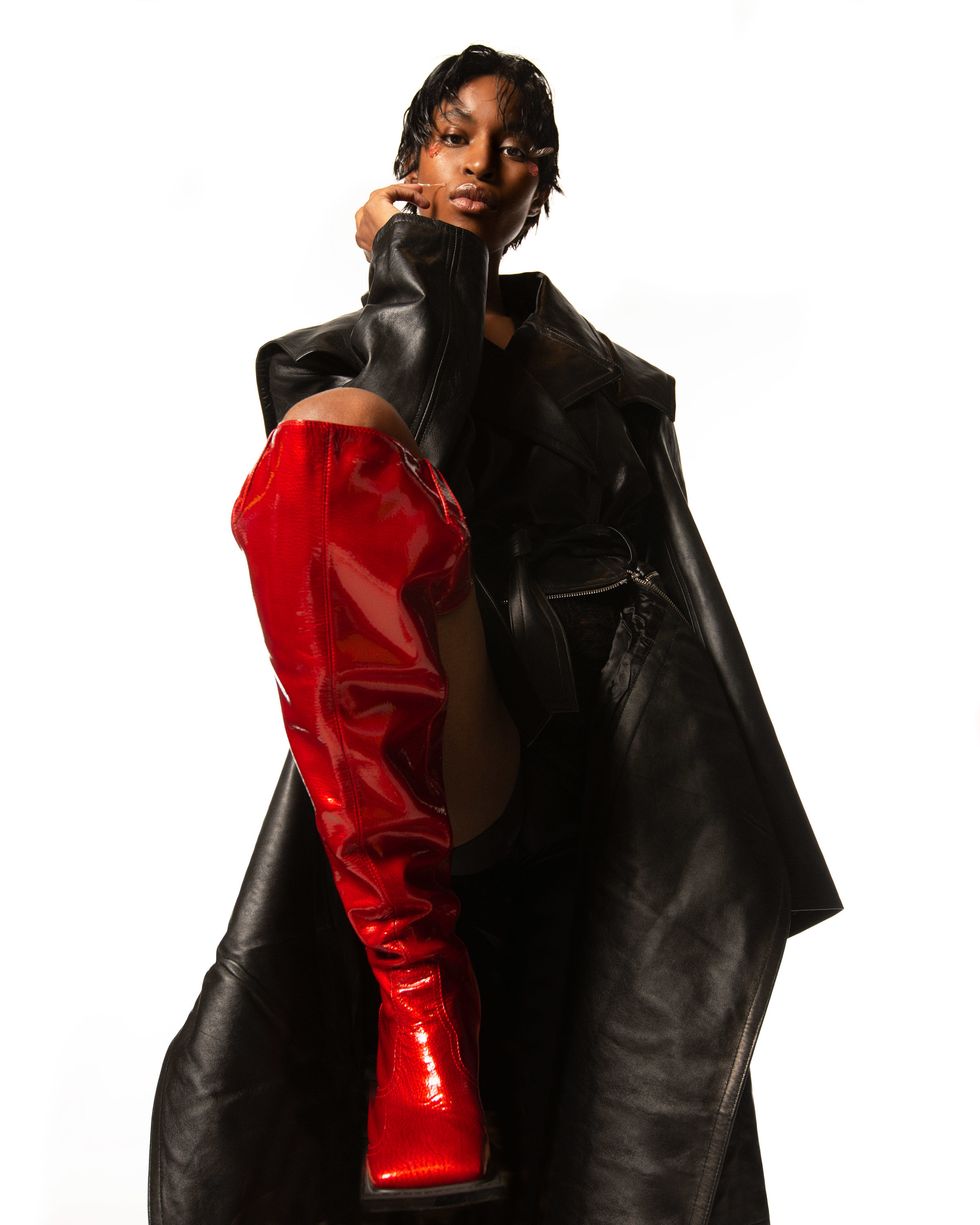 The snail was a recurring motif in this collection, from the small bags to the live snails. Why?

NL: I have a very deep emotional bond with 'pest' animals. Snails to me are already jewelry. The house that they have built. I deeply respect them. For the wedding suit with the veil, we used the white butterflies (koolwitje). They are beautiful and delicate, but as a caterpillar they are hideous and destructive. A pest in the garden. I love that. The opposites of metamorphosis, but the same animal.

RB: Slowness was also a recurring motive of the collection. The rapid speed of transformation, frozen in time. Snails are mostly known for two things: their tranquility and the regenerative quality of their slime — very much connected to our view on metamorphosis. 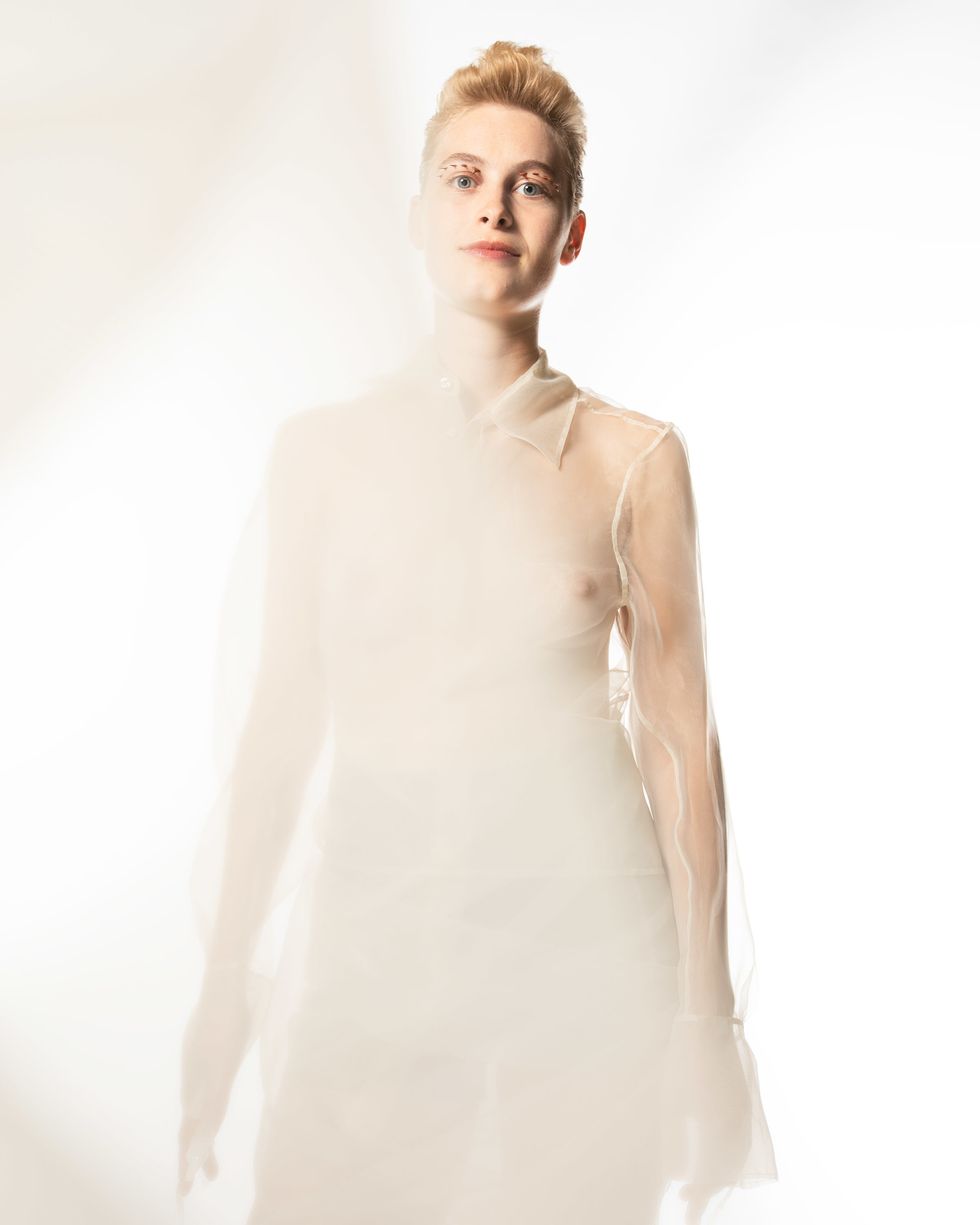 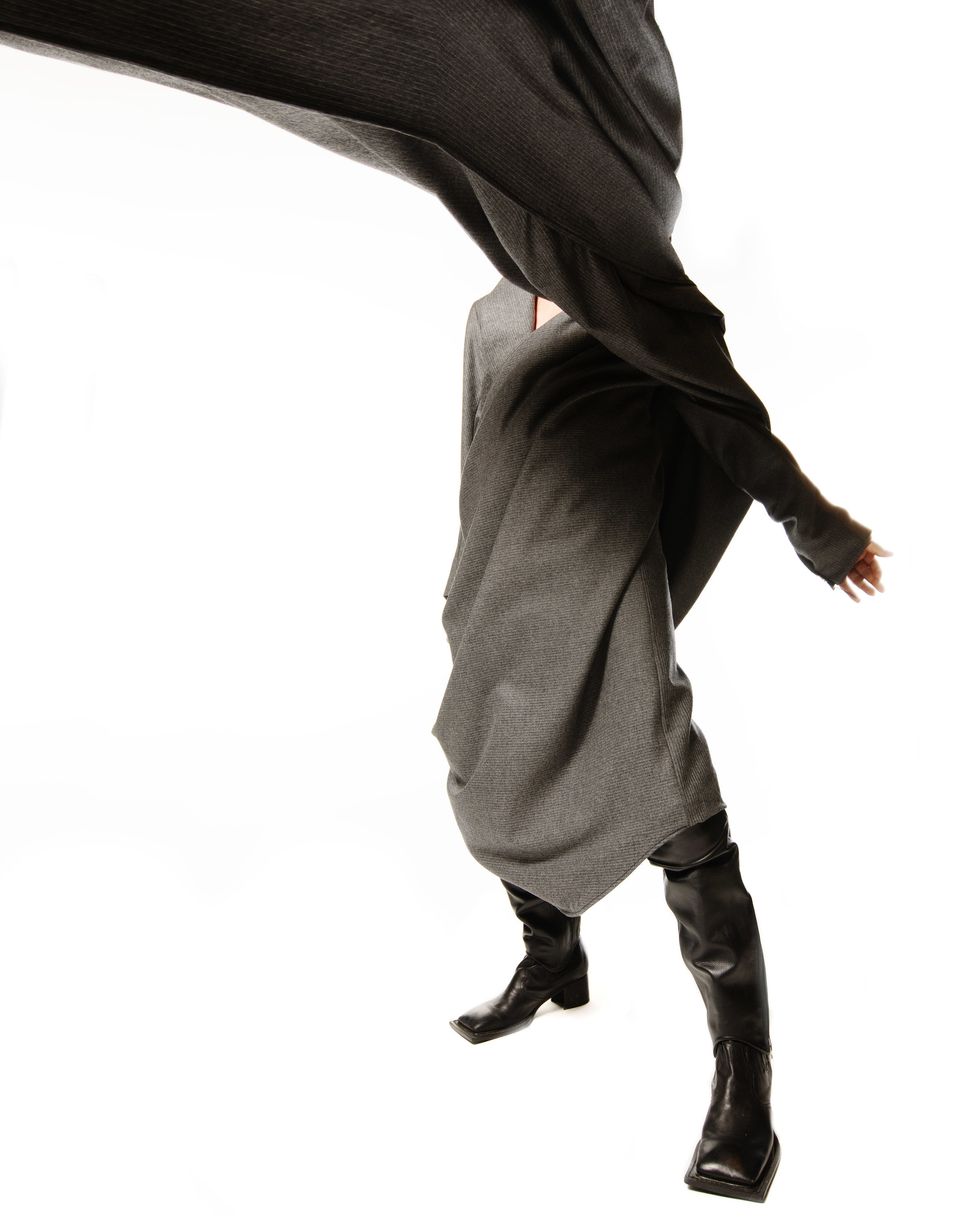 Are there certain looks or silhouettes that you felt were classic Ninamounah, and which looks felt like growth or development for the brand?

NL: My favorite look right now was the asymmetrical brown pinstripe suit. The left part of this suit is like a whirlwind around the body. A cocoon of protection. I have never draped as much as in this collection and I absolutely love it. It's very much like painting. One step to much and it's ruined. I love how poetic this is.

RB: There was an even harder focus on tailoring this collection. A bespoke suit is like a second skin — something to fit you perfectly and to grow with your body. It's something that you keep with you forever. This collection also incorporated the materiality of metamorphosis: the opening look was made from naturally shedded snake skin, becoming a new skin to another species. 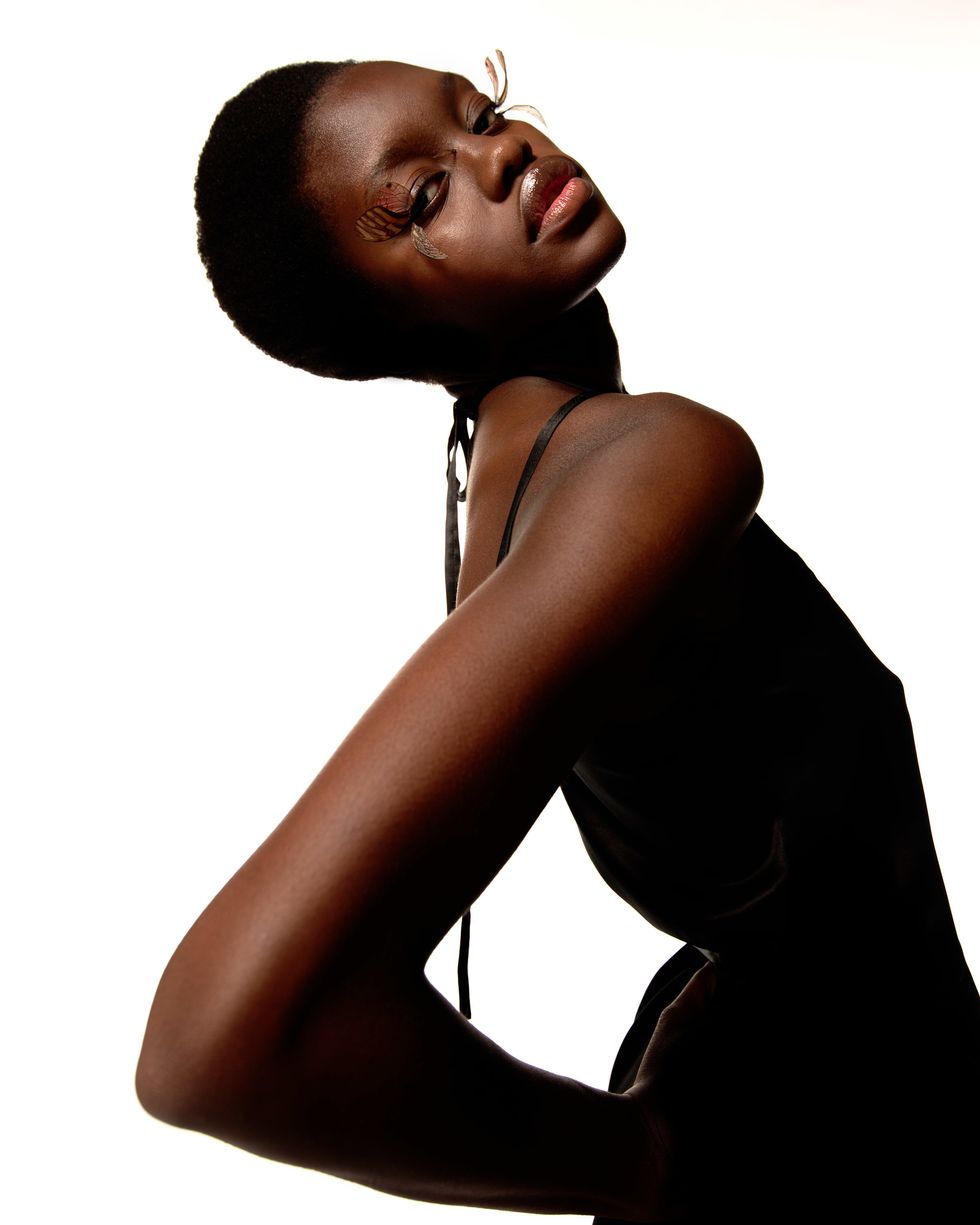 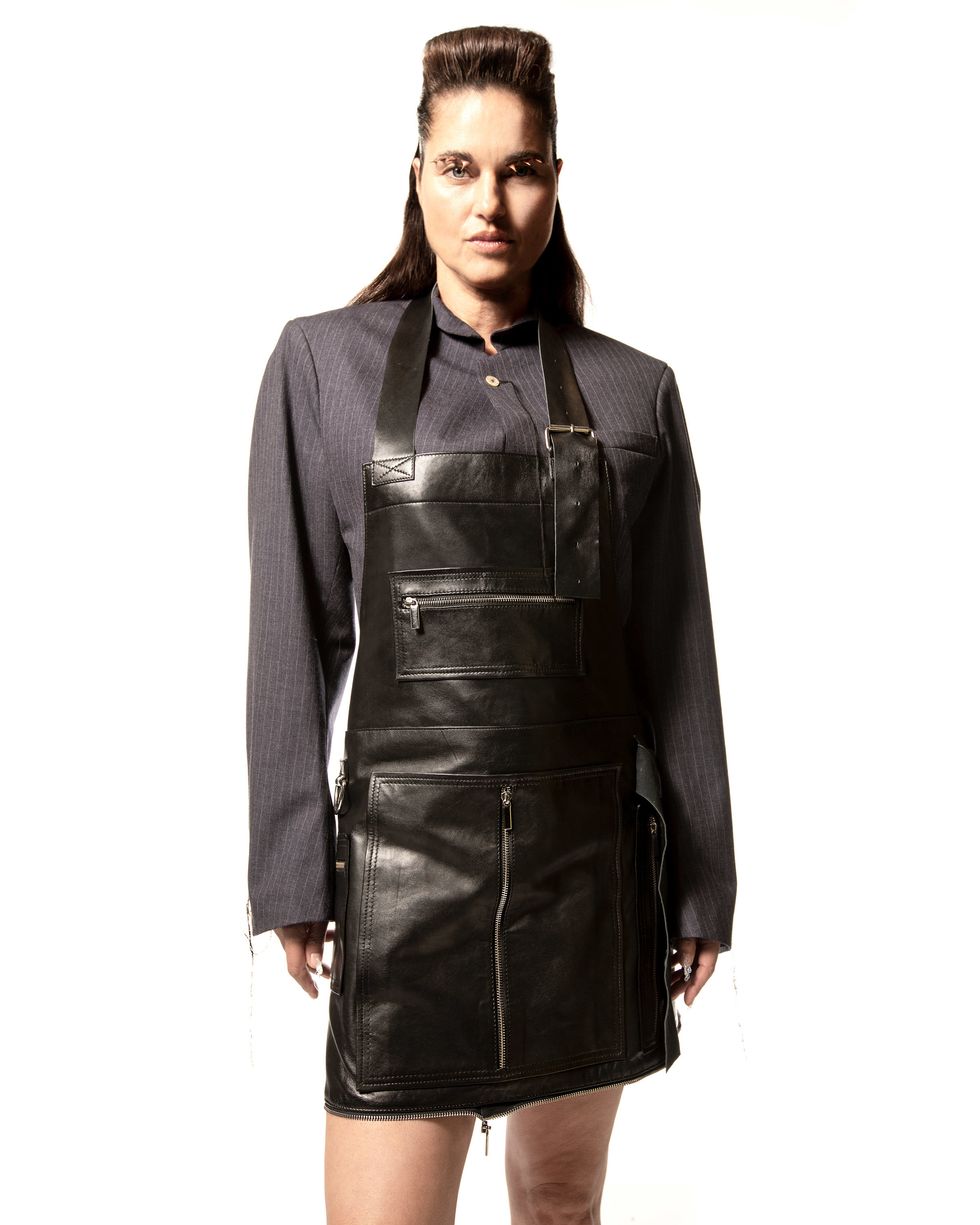 The production itself was intense and at times chaotic. The drumming at the end, the models circling anxiously. Was this all intentional? Why?

NL: It was needed in a church. We were looking for an opposite energy.

R: We wanted to capture a the feeling of metamorphosis itself. Cells moving rapidly. Mitosis in full force. An organism speeding towards an ambiguous destination. Models emerged from the dark as well as from the light, sometimes becoming invisible only to re-emerge from an unexpected corner again — ungraspable beings shimmering in the show space.

It was very important to engage with the venue as a monumental force of nature (and not like a place of religion per se). The organ trembling like a seismic shift, its ribcage enveloping the crowd. In the dark you really feel the weight of the natural materials, of the stone and the massive arches, all in perfect harmony together. But the moment the drums started playing this harmony becomes discord — its acoustics propelling sounds chaotically through the space into new tones. I find this very beautiful. 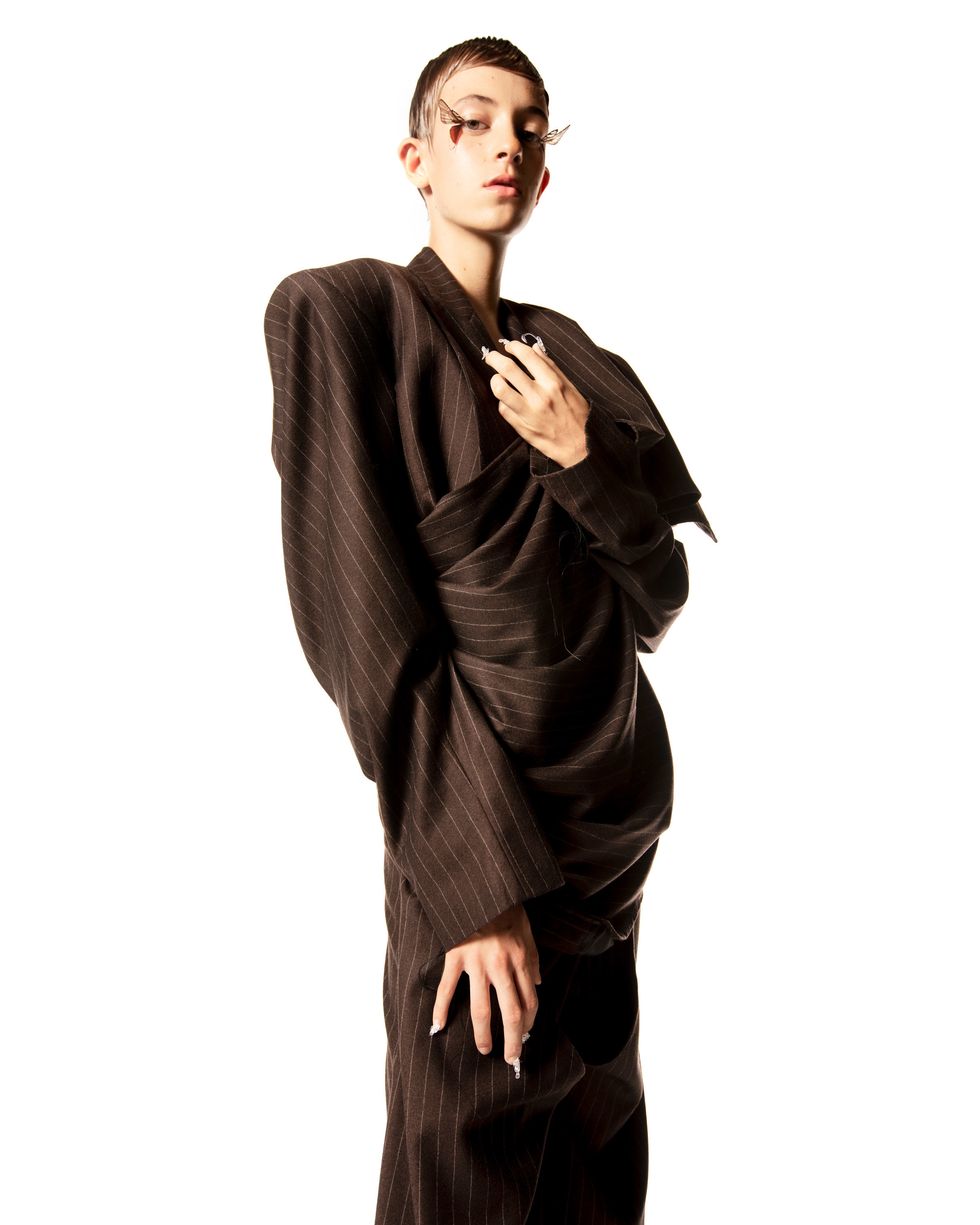 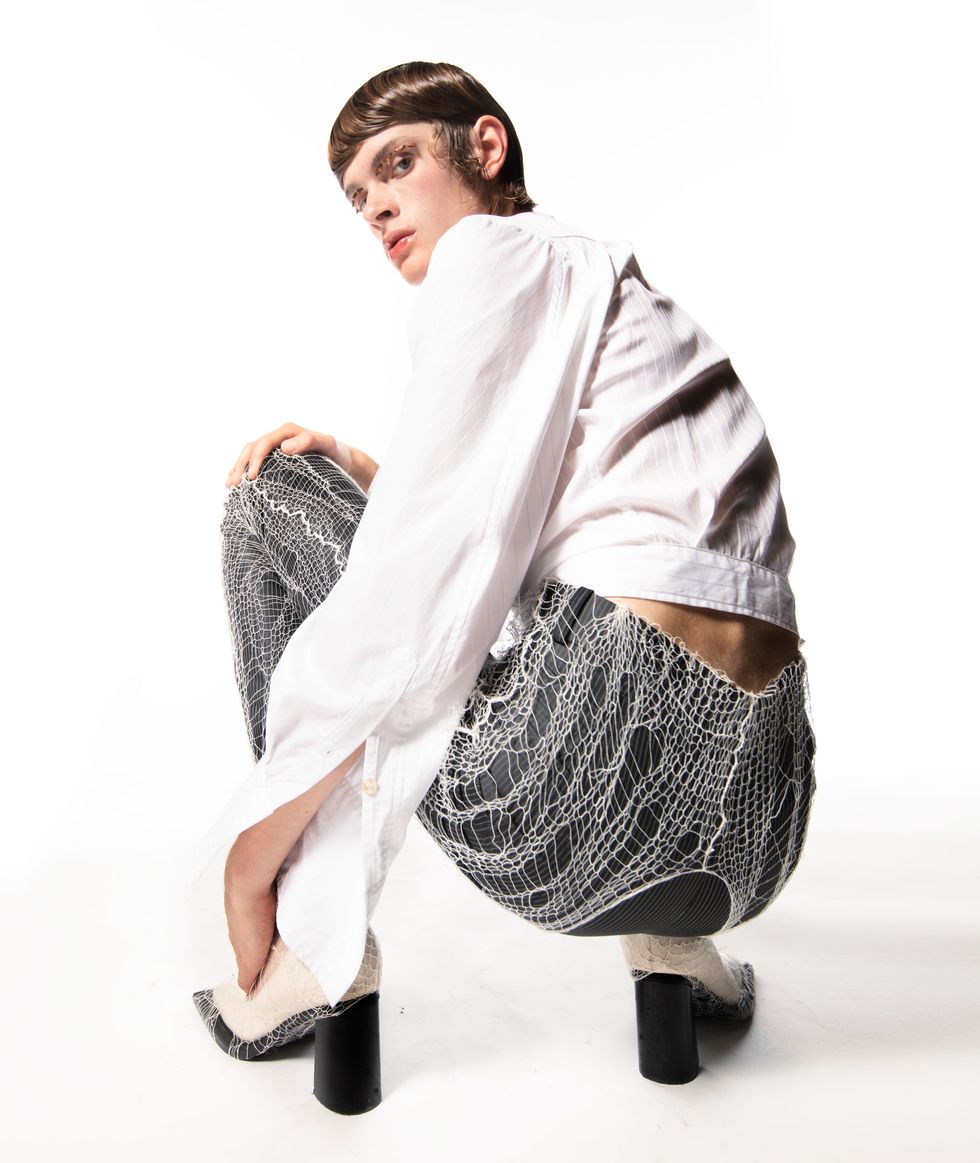 Your square toed shoes are becoming signature, and this season they were even bigger/more dramatic. Why this shape, and how do you think it complements the clothes?

NL: Never thought about complementing the clothes, to be honest. We wanted to create a shoe where your toes are free and to create a more hoof-like foot. The heels also leave a print of a hoof.

RB: We let these claws mutate for this show. Moving towards another stadia, like axolotls. Losing the tails and growing toes.

You cast these shows yourself, and always include a wide range of models. There are a lot more older models than in many other shows. Why is this important?

NL: These humans embody metamorphosis as we go to different phases of life. I find that so beautiful. These phases we wanted to recreate in the show. Different life energies.

RB: The attitude older people carry is very impressive. They know who they are and they're comfortable in their skin. They have nothing to prove. Serenity. It's very different to work with an older model than to work with a new face. Younger models are often still soft and moldable. Fashion should not tell people what to be, but rather complement what is already there. Working with older models is doing exactly that. They give life and energy to the garments, not the other way around.