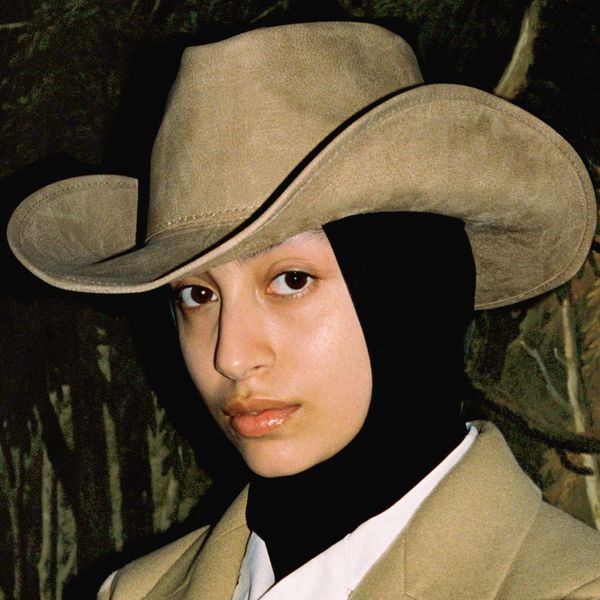 The Yeehaw Agenda, as it's been labeled on Twitter, is spreading with unstoppable force throughout pop culture. Cowboy aesthetics dominated Solange's When I Get Home album rollout, and they've transformed Cardi B into the ultimate glitter-bombed ranchero cowgirl; country music all-stars Maren Morris and Kacey Musgraves, who welcomed us all to the "Yee Yee Club, Bitch," are naturally cornering the look, while niche Instagrams such as @theyeehawagenda are chronicling rodeo-inspired style in the Black community.

It's the ultimate collision of Internet snowballing, celebrity obsession and cultural connect the dots, and classic Americana — specifically the type that dominates Trump's America — is strangely at the heart of it all.

So when there were glimpses of the viral trend at Amsterdam Fashion Week, a showcase of local talent in the Netherlands' capital, I asked designer Ninamounah if she'd been seeing all the Twitter threads, robust op-eds and hilarious memes surrounding Yeehaw. But that response to her fall 2019 show was much too surface (and perhaps testament to my unhealthy amounts of screen time). "It's more about taming and breaking the animal," she said of her collection, "and that's what cowboys represent in the Wild Wild West. They have such a close relationship with their horse, but they have to break it until they can have it between their legs."

Beautifully tailored pieces grounded the collection, from boxy double-breasted jackets to looser pinstripe suits with lace-up detailing on the sleeves. This, like with all of Ninamounah's thinking, was intentional. It represented "restriction," she said. "[In society] you have to be tamed, and that's like taming a wild horse — taming, or suppressing, the beast that we are. We are still animals, and we shouldn't forget that." The majority of models wore cowboy hats, one of which was so enormous it made Jacquemus' #HatGate controversy look silly. There were playful frog-shaped purses, bodysuits styled with leather chaps, acid-washed denim, sensual corseting, and pieces printed with the word "Evolution" in gold.

"[Cowboys] have such a close relationship with their horse, but they have to break it until they can have it between their legs."

Extending her ideas of dominance, Ninamounah recruited longtime friend and local artist Sam Andrea to paint the collection live "in visual symphony." Models filed into the space to create a family portrait, only shifting their poses — stiff, stone-faced, and dramatic — when the string bass occasionally plucked a low, droning note. Andrea continued painting throughout, outlining cowboy hats and filling in his figures with bold hues like lime and red, or "the most aggressive color on the spectrum," as noted in Ninamounah's press release. "We wanted to work with still life because when you paint [this way], you want to show how rich you are," the designer said. "That's another human thing to do — to show how much you have." By the end, Andrea had created a portrait that could suitably hang inside Huis Barlotti.

Evolve Around Me is Ninamounah's fourth collection (see one, two, three), and echoes a history of using fashion as a vehicle for commentary on humans' relationship with animals. Her exploration of societal power structures is inevitably laced with sex, and the many ways our sexuality fuels ideas of dominance across genders. From a structured black leather trench ("extremely masculine") to a commanding silk evening gown ("extremely feminine"), Ninamounah's fall 2019 show successfully "peeled off the layers of culture to release what lies underneath: our instincts," as promised by her website. Because ultimately, "we are all animals wearing a couture dress of culture."