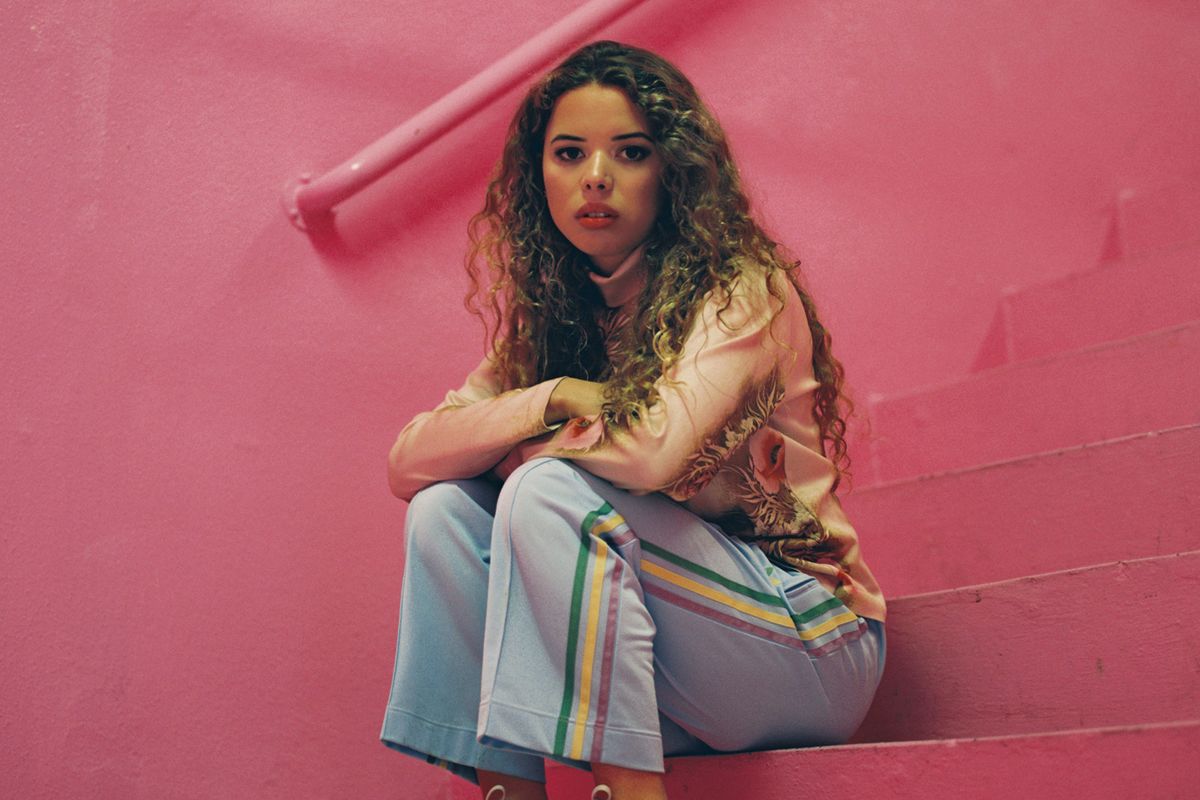 The first thing I notice about 22-year-old singer/songwriter Nilüfer Yanya when we meet in a SoHo thrift store is her quiet assuredness. She responds to my rambling questions with collected, pragmatic wisdom. While sifting through vintage dresses, we realize we both love the same colors: orange and pink. When I ask if there's any grand symbolism to these hues, she says no — these things change. Yanya's sure her favorite color will be different in a few months. When she performed at Mercury Lounge in November, her banter was just as straightforward. After describing a song or introducing her stage partner, Jazzi Bobbi, Yanya would say things like, "There isn't much more to say, really." and start her next song.

Her voice cut through the prickly anticipation that filled the room; the audience was eager to see the London native's first U.S. performance. The show came after the release of her 2017 Plant Feed EP and a subsequent single, "Baby Luv", which got a lot of well-deserved attention. Euphoric and grand despite its sparse instrumentals, the track was one of the best indie-pop songs of 2017. Besides making music, Yanya is also politically active. She and her sister started Artists in Transit, an organization that works with refugees in Athens, providing them with spaces to express themselves through art.

At one point, an employee of the thrift store we're shopping at comes up to us and points to a dress with thick, oversized shoulder pads. "This will make you look like you have huge shoulders — very strong." This is not advice typically given to women, who are more often told by society to look delicate and small. I wonder what it is about us specifically that makes this person feel comfortable giving us nontraditional beauty advice. But before I can say anything, Yanya simply responds, "Yes. Strong women". Throughout our conversation about her shifting perspectives on love, her interest in art and design, and her politics, this strong conviction and focus is undeniable.

I saw in another interview that you said if you weren't a musician you might be a designer.

Yeah, I love making things. I don't know how good I'd be. Making clothes and being a designer are two different things.

Do you find your interest in fashion influences your music — the way you design your album covers or your stage outfits or music videos?

No, but I guess it's coming from the same part of your brain. You kind of sound what you look like. What you make starts to sound like your music.

I'm curious about the design of the Plant Feed album cover. There's a contrast between plant feed as an object and flowers as the product they help create. Why did you choose to represent the plant feed rather than the flowers?

Plant feed came from the lyric in "The Florist." I was thinking about actual plant feed and how it would be cool to see the packaging turned into artwork. It was like a product — something you could buy in a shop. I was attracted to the artificial aspect of the plant feed because it resonates with all the artificial aspects of modern life. I like how 2D it is. Unlike flowers themselves which are real — they grow and wilt and die — plant feed doesn't acknowledge that. It only acknowledges the growth and life aspect. It doesn't think about death or endings. It's like how in modern life we rarely touch on these important topics in our day-to-day.

You've said that your music reflects your age, and that as you've grown older, you've realized that love doesn't always last forever. Do you feel that realization is a negative one or just a reality of getting older?

It's a bit of both I guess. I think that's how you feel when you're out of a relationship — nothing's meant to last forever. It makes you feel a bit better. When you start seeing someone again, or even when you're with your friends, and you don't want a relationship to end, that gets really scary and you start thinking, "Relationships do last" just like when you're young. Also, obviously you have to work hard to keep a relationship going, but if it's going to be sustained for a long time, you shouldn't have to work so hard.

I love pop music, and I feel like elements of your music have that infectiousness, but then also your lyrics are different from what typically plays on the radio. What do you think of pop music?

I really like the simplicity of being able to get a concept in 3 minutes. That's really interesting. Less is more with pop music. The best pop songs have the least going on in them. It's a structure you can play around with. [I like] the way patterns are formed and made with the music. Something is really appealing and satisfying about creating a shape or pattern with music that can be used and repeated in different ways.

In a few of your songs you repeat a phrase over and over like, "Why you leaving" in "The Florist" and "Call me sometime" and "Again" in "Baby Luv," What do you think this repetition does sonically and lyrically?

Repetition is great because it means more each time you repeat something, and once repeated over so many times, [the word or phrase] loses it original meaning and starts to mean something different altogether.

You made the "Baby Luv" music video with your sister. What was the process like?

We had all these ideas and then we decided to shoot it in Cornwall, and then once you get there, you work with what you have in your natural surroundings. You always forget about things like weather and how it's going to affect everything. It was really fun and also dangerous because we were climbing up all these rocks and stuff. We were nearly trapped on this beach because the light started going really quickly and we were in a desolated area. We had to run back over the rocks and I had no shoes on.

How did Artists in Transit come about?

My sister started it with me last October. We had heard so much about refugees trying to get to Europe and not being allowed in. It's strange that you know that they're there but you never see them or speak to them, so it's a way of communicating to them in a way that we know we can. W always did art when we were younger, so it's nice to be able to give someone that even just for a little bit. We want them to create what they want to create.

For a lot of us in the US, after Trump was elected, there was a period of national mourning — people started organizing more, but also the undercurrents of what led to Trump's election was always there. Marginalized people knew those realities intimately. Do you feel like there was a similar experience after Brexit?

I guess in the same way — I don't want to say it wakes people up, because so many people are already awake. They have to be because they don't have a choice. But it wakes everyone else up who before thought the country was fine, who thought, "We're so left wing, we're so understanding." It's like, "No you're not". I think in that sense it's good — they realize what they're actually faced with.