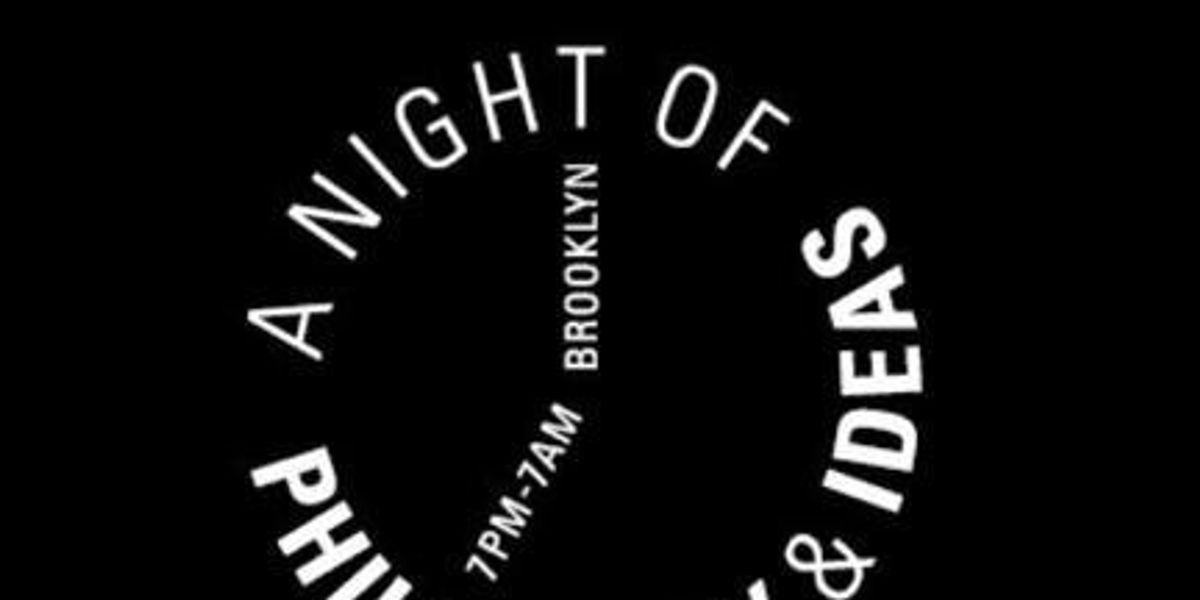 The line extended several blocks along Fifth Avenue, persisting until 5 am, the wait to get in approaching three hours. What could it be? If you answered the Night of Philosophy at the French Cultural Services you are preposterously correct. Yes, in this city of dreams there are people who'll go to extremes to enjoy a special night of readings, talks, DJs and performances presented and inspired by some of the world's most prominent philosophers from France and the United States.

And now it's back. Saturday will be another night of heady programming designed to titillate your cerebral cortex, this time in partnership with the Brooklyn Public Library as part of a more ambitious project undertaken by the French government called the Night of Ideas, which will be taking place in 40 cities around the world. "The idea is really to give people a time to think about the issues of today," says Benedicte de Montlaur, Cultural Counsel of the French Embassy. "The first time we were very surprised by our success. We had lines the whole night. It was very encouraging, a sign that people want to hear about philosophy and what philosophers have to say about all kinds of existential questions."

Wise to the ways of the world, the Night of Philosophy also caters to our baser instincts. "The idea is also an intellectual rave party," she says, "that lasts all night. It's an experience, a site specific night around ideas and performance."

It's thanks to László Jakab Orsós, the Brooklyn Public Library's new vice president of arts and culture, that the event landed in Brooklyn. One of those who squeezed into the French embassy for the previous "multi-functional overnight event," as he described it, Jakab "instantly saw it needs more space. A new location is also ideal," he notes. The Embassy's Fifth Avenue and 79th St. mansion being far off the beaten track, he offered to host it at the Brooklyn Library and they agreed.

"I thought a library would be the way, physically opening its doors to a large public overnight. It's a public space, space that people should feel safe to raise and form questions, and maybe get some answers."

Given the election of our anti-intellectual president who can barely read a briefing, let alone grapple with the nuances of philosophy, this seems like either a particularly good or particularly inappropriate time to be undertaking a project of this sort. "This is not why we are doing it," he says. "We started to plan this a good eight months before the election. But as I keep saying, we have to embrace reality and embrace current events, understand what we are doing in light of current events. Night of Philosophy became a different project since the election. The day after Trump won I immediately realized that what we do will have a different meaning because of the outcome of the election."

The role of the library as hub for critical thinking feels right to him. "To find places to gather and to do something that doesn't directly speak to issues is much needed. The idea of coming into a building late at night and listening to abstract ideas and just floating around in this building at 3 am has a certain value to it. The right to think in abstract ways. The right to slow down. Whatever that pain is. We need this project to be all-embracing. The underlying curatorial theme for this is slowness."

Opened all night for the first time, the Central Library at Grand Army Plaza in Brooklyn will host more than 50 philosophers, artists and thinkers beginning at 7 pm, Saturday, January 28. The evening will kick off with Achille Mbembe on Democracy and then break out into different rooms of the library for a marathon of talks and performances including the Trisha Brown Dance Company, National Sawdust-affiliated musicians, marathon readings of De Tocqueville's Democracy in America and Alain Badiou's Plato's Republic.

You can find Night of Philosophy's complete schedule HERE.