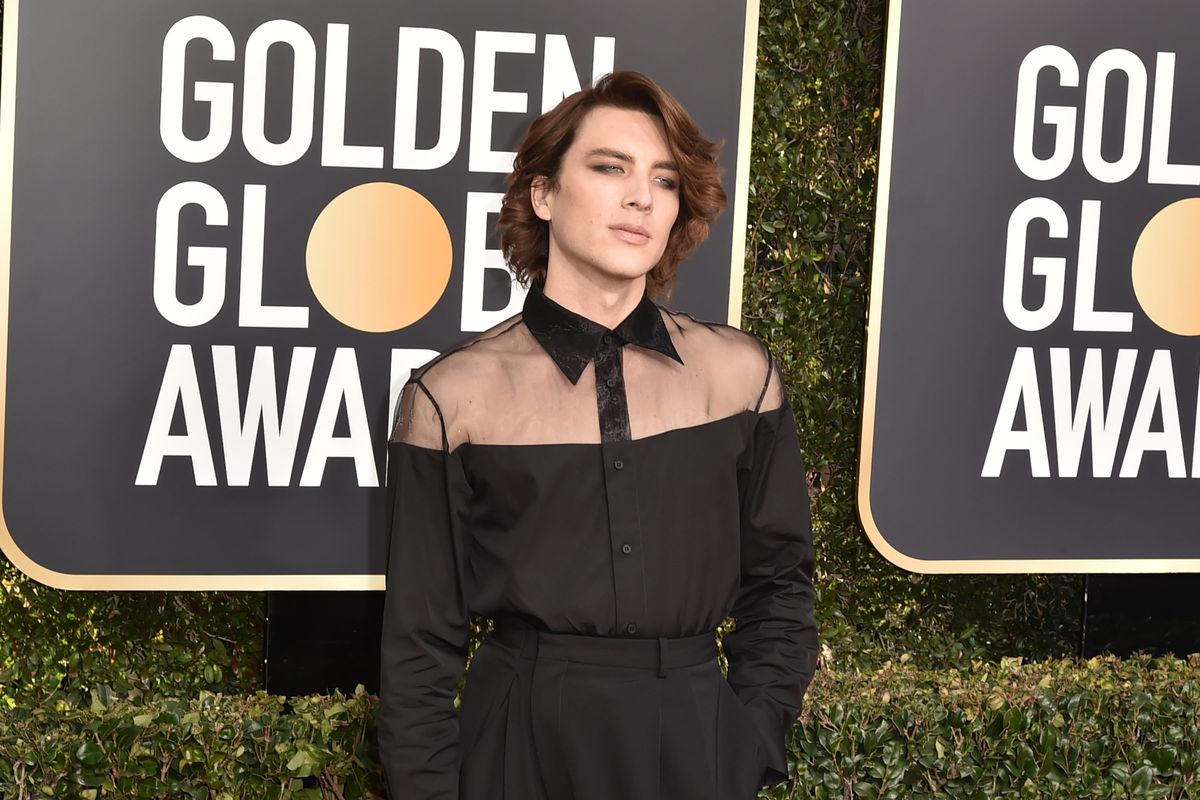 The Devil wears Margiela — at least according to actor Cody Fern, who transformed into an all-black, romantic goth for the 2019 Golden Globes red carpet. Stylist Nicola Formichetti, famous for his provocative work with Lady Gaga, is responsible for collaborating with Fern on the head-to-toe Maison Margiela outfit, complete with leather Tabi boots that shook the Internet to its core.

The 30-year-old Australian star attended the Beverly Hills award show alongside the cast of 2018's The Assassination of Gianni Versace, which included Penelope Cruz, Ricky Martin, and Darren Criss. In the series, he played David Madson, the lover of convicted American serial killer Andrew Cunanan, who notoriously murdered Versace outside his Miami home in 1997.

Fern is also famous for his roles in American Horror Story and House of Cards, rounding out his sinister Hollywood reputation with a red carpet look that leaned directly into the drama. His semi-sheer black shirt, billowing high-waisted trousers and heeled shoes were styled with a dark, smokey eye (Zaheer Sukhnandan) and sexy, tousled hair (Sussy Campos) that underlined several A-list actors' recent embracement of queer style.

PAPER called up Formichetti, who's been busy working on Lady Gaga's Vegas Residency Enigma, to talk about dressing Cody Fern and how he's feminizing traditional menswear.

How did you go about transforming Cody Fern's look?

It was really exciting for me to work with someone like Cody, because I've been a huge fan of his work. He always plays such unique characters: in American Horror Story he was the son of a devil, and in The Assassination of Gianni Versace, he's this crazy guy. So I was always following his work, and we got to meet together and just got on really well. He wanted to do something more interesting than a typical red carpet look, so I was definitely up for it. Because for me, working with [Lady] Gaga for a long time and always using the red carpet as a space to show who you really are and show people what you're really about — a space to experiment... I wanted to try out with Cody, where we could go. For me, it was very important to break and update the code of menswear — the typical men's red carpet look. I didn't want Cody to go in a typical tuxedo or suit, I wanted to show that the boys can have fun with makeup and fashion, too.

Was Cody on board with everything?

When I work with anybody, it's always about collaboration. I never ever push anyone to wear anything, I never do that. And so it was kind of a natural progression from what we talked about, and what he wanted to do as an actor — where he wants to go. We have so many incredible ideas that we want to do in the future. This is just the [teaser].

Why did you go with Maison Margiela?

We chose Margiela, because Maison Margiela is always pushing forward the androgyny. And I think it was a great match with Cody's sensibility.

Compared to when you first started in the fashion industry, do you think men are more comfortable now taking risks? There's a lot of talk around Ezra Miller, and the way he embraces femininity on the red carpet.

Compared to when I started, for sure — men are starting to have more fun and trying to push boundaries of what you can do on the red carpet. So I think it's a very exciting time, and I think it's great that there are other people like Ezra Miller, and even Timothée Chalamet, and the new generation of actors emerging... they're experimenting with their looks on the red carpet. They're all different, and still doing it in their own way. I think Cody is more about the romanticism; I don't see him as an avant-garde fashion person. He's almost like a storyteller. He has a lot of knowledge on old-school movies, and is a little bit gothic. It's sort of like he's telling a story with his look, it's really interesting.

"For me, it was very important to break and update the code of menswear [...] I wanted to show that the boys can have fun with makeup and fashion, too."

The Tabi shoes are so iconic. In the fashion industry, we all know the Margiela Tabi boots — it's an interpretation of traditional Japanese socks. But to see the Tabi boots on the red carpet on a boy... it's a moment, I think. And he wore it in such an elegant and beautiful [way] that I think it kind of shook the world. And this is what I love about fashion: that still today with what you wear, you can make people think and discuss — talk about the world we're living in, and it makes you think, wonder and question. I think discussion is all good, and someone like him who's representing the emerging generation of actors... it's exciting.

Why do you think celebrities are so comfortable coming to you to elevate their look?

Well, I push new fashion and things like that. But also I research a lot and I communicate a lot with the person, so it's never like, Okay here's this crazy outfit... go! It's never about that, it's always about elevating them and who they are. It's also not a crazy transformation, I love taking what they have and working with it or focusing it. Maybe people come to me because I don't force them into anything. But also, I tell the truth. I don't care about pleasing them. If you look boring, I'll tell you you look boring. I've always stayed away from Hollywood, but I think now we're in the time where a lot more people can voice their identity and I think it's important to speak up and show through style that you can do so many different things. It's actually an exciting time, so maybe I'll be doing more in Hollywood.

Are there any other celebrities you'd like to dress on the red carpet?

In the last few months I was like, I really want to work with Cody Fern, and then it happened [Laughs]. I want to tackle, I don't know who, but I think working with a very traditional masculine man could be interesting too. Not just the feminine side but also the masculine side or people like that, who're very masculine and traditional that want to try something new without being ridiculous. Or even women — I'd love to work with an older actress.