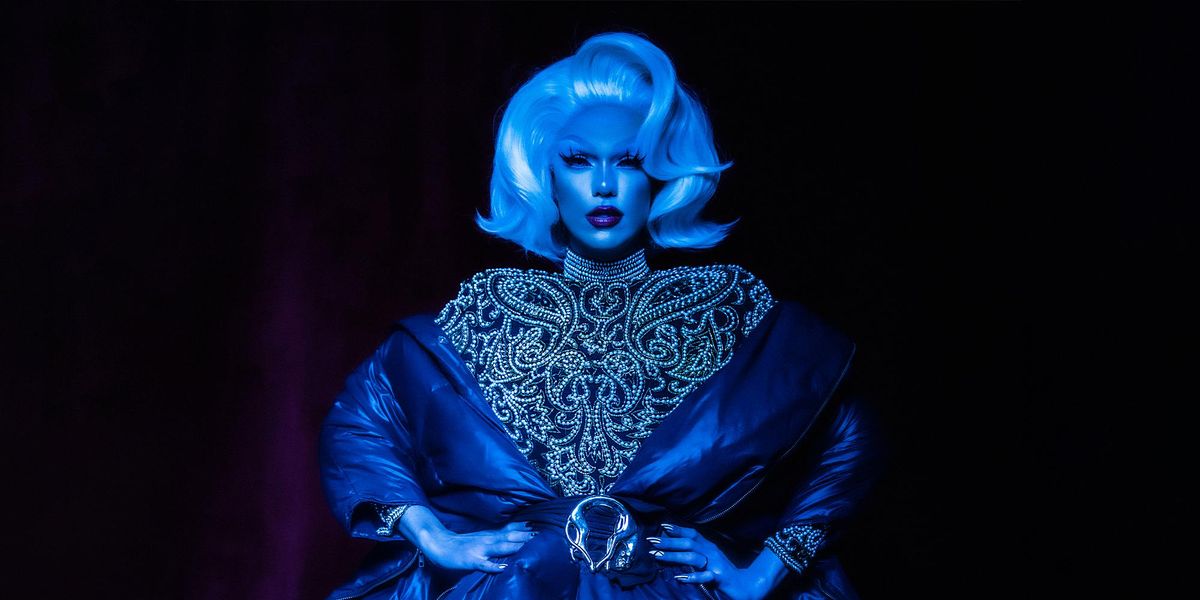 Welcome to the Nicky Dollhouse

She's not like the other dolls; she's a Nicky doll. Thee Nicky Doll, in fact. Nicky, real name Karl Sanchez, was first introduced to a global audience as part of the cast of RuPaul's Drag Race season 12, where she was introduced as "the fierce fashion queen."

In her Meet the Queens video she says that anime and runway are what excite her most. "I'm not just a label whore. I'm also a video game whore." And these days, she's a digital drag whore thanks (or no thanks, really) to the pandemic, which has forced the artform of drag to retreat from the clubs to the web and social media. "I think that one of the blessings of season 12 is that we never really experienced what we should have had in terms of life after the show," she says. "But we did have our followings grow significantly. So being able to release art like this but have a much bigger audience feels amazing by itself."

Related | Why Did It Take 'Vogue' So Long to Put Drag Queens on the Cover?

How have you kept yourself motivated during quarantine?

I recently moved from Union Square to the Upper West Side because I wanted a bigger space, and so I figured that building a new set-up and trying to come up with new content was the new way going into 2021 to survive the pandemic. I think having a new platform and discovering a tiny amount of fame through Drag Race is really something that you don't want to let go to waste, and so I think that when it started I thought, "I have to do this for the fans. They're discovering me on this TV show and they want to see what I'm all about, so I have to find a way to be resourceful and thrive no matter the circumstances." And after a few months I started to hit rock bottom in terms of motivation and ideas. But at the end of the day we're drag queens. We used to cross dress when it was dangerous to go outside. We used to take the subway with big sunglasses because we didn't want people to see our faces. So we know what it is to go through things.

Nearly a year into this, what's one way your drag has changed for the better as a result of spending so much time in solitude?

Well, let me tell you that she gained a little weight, that's for sure. She's not a sample size anymore. So I did change in that way [laughs]. And I think I'm more aware of how to be screen ready, I'm more aware of how to use makeup and lighting in a way that can translate really well on the screen. I think on top of that I developed so many skills that drag queens need to have. We're not only just performers now. We have to be producers and we have to know how to edit and how to translate an emotion using a different tool than just playing off the audience. I think I've become a more full, rounded out queen in this new digital era.

Where is the first place you want to travel to once quarantine has lifted?

When I started on Drag Race, I wanted to compete against the other girls, I wanted to compete with myself, but I also wanted to first and foremost meet the fans and have this experience of travelling around the world. My little nerdy, geeky gay boy would love to go to Japan. But there's a tour I'm supposed to do in the UK with Brooke Lynn Hytes, it's a musical that is inspired by Chicago, that I'm really looking forward to.

Do you hold any frustrations over the fact that season 13 of Drag Race is now in full swing, the fandom's attention has turned toward a new crop of queens, and your season was never given a proper tour to really go out and meet the fans in tandem with the height of your time on the show?

Well, before having season 13 we had All Stars 5 which came right after us. And if I have to be completely honest there's always a little bit of fear in situations like that. "Are we old news?" And it turns out you're not because we are all pretty individual in our own way. I don't feel upset or frustrated, mostly I feel sad for all of the girls that came after us because we were the first ones to experience it, and I know how traumatic it was but I was lucky enough to travel at least two or three times [pre-quarantine]. These girls now don't even get that. And I know so many of them, and the sisterhood kind of takes over and you're just happy to see your girls thrive rather than being bitter.

Is there any one girl you are rooting for on season 13?

I can't choose one but Kandy Muse is the girl that I started with in New York, so her. I love the message that Gottmik is sending to the world because he is, as he says, breaking the cis-tem. I love Olivia Luxe. And Symone is just incredible. I think Symone is giving me RuPaul junior which is really cool to watch because I've never seen a girl that reminded me of RuPaul himself.

Tell me your origin story of how you first started doing drag.

I was born in France, in Marseilles, but then I moved with my family to the Caribbean when I was seven years old. And then when I was thirteen I moved to Morocco. So growing up in Morroco being gay and being an immigrant was not always easy because I was always different. So when I came back to France in 2009 I was kind of like this broken, femme boy that was always targeted for being femme. And for Gay Pride that year I decided to face my fear, and since I had been so feminine and so... gay... why not just push the button all the way and be a girl? And I think that's when I started to explore gender, and the rest is herstory. When I saw the reaction of the people I started to realize that I could actually make money off of this and then Nicky Doll was born and she never stopped. In the beginning she was rough. Her name was Megan, by the way, because she thought she could be like Megan Fox. But I looked more like a brick than Megan Fox so I changed the name. But when I started to create Nicky Doll and started to get inspiration from the '90s and video games that's when I realized I had something more. Only took four or five years [laughs].

What would you say is the biggest lesson you learned from your time on Drag Race?

I definitely was going through it when it comes to being an immigrant and being in a new country and sometimes being over-motivated and wanting to be accepted so much can prevent you from being your authentic self. I think that after watching myself on the show I realized that I needed to breathe and chill, even if there's some awkwardness from not being from the same culture, just being yourself and teaching people the way that you think and the way that you talk works also. You don't have to fit in. You can stand out.

Bling Empire on Netflix. Obsessed. And I'm not a big reality TV person. I like competitions but reality TV is never really my thing, but I ended up watching the whole thing. I could not stop. The little feuds are so entertaining.

I love how rich they are.

Right? Anna Shay said, "Oh, I want to take you to my favorite restaurant. It's in Paris." And then they're in a fucking private jet to go to Paris. So good.

It would have to be Lady Gaga. I discovered her in 2009 when I was 18 and just coming back from France and she definitely helped shape my confidence.

Can I name a bad album?

Joanne was not it for me.

Ruslan Angelo. Such a hot boy. Beautiful smile, great butt, what else do you need?

Favorite LGBTQ+ person that more people should know about?

Tell me about your skincare routine, because as a drag queen you know your face quite well, but you also put your skin through it.

Taking care of my skin is really important because outside of doing drag I'm a freelance make-up artist and I work in the beauty and fashion industry, so I need to be a good role model for the models that I do make-up on. And so what I do is always use a serum before I use my moisturizer because the serum is what's going to bring minerals and moisture to your skin. The moisturizer is only going to lock that moisture into your skin. And when you remove your makeup just make sure to take your time. Never go to bed with any make-up still on your face. That is the number one rule. Clean and moisturized before going to bed.

Who is a celebrity that you think consistently has a good beat?

J.Lo is the glow queen. And I'm a big fan of Erika Jayne. I think she has a great mug all of the frickin' time.

When do you feel your most sexy?

I usually feel my most sexy when I wake up and I'm hungover and dehydrated and I wake up in the morning and think, "yes, you're snatched."

First and foremost try to understand why you want to do drag. What is exciting about drag? Is it the dress up? Or the performance aspect? Do you want to be an actress? Do you want to be a singer? I think once you realize which skills of yours you want to gather together to create your drag persona, it's important to know where you stand. Because if you think you're going to go into drag just to be a stunning runway model, well guess what? That's not enough. If you are a performer and you're a little overwhelmed because drag is expensive — and it is — I always say take your time. Invest in one fully realized look. Do your performance around town. Gather enough money over time to start investing in a second look and round out your portfolio of songs in the meantime.