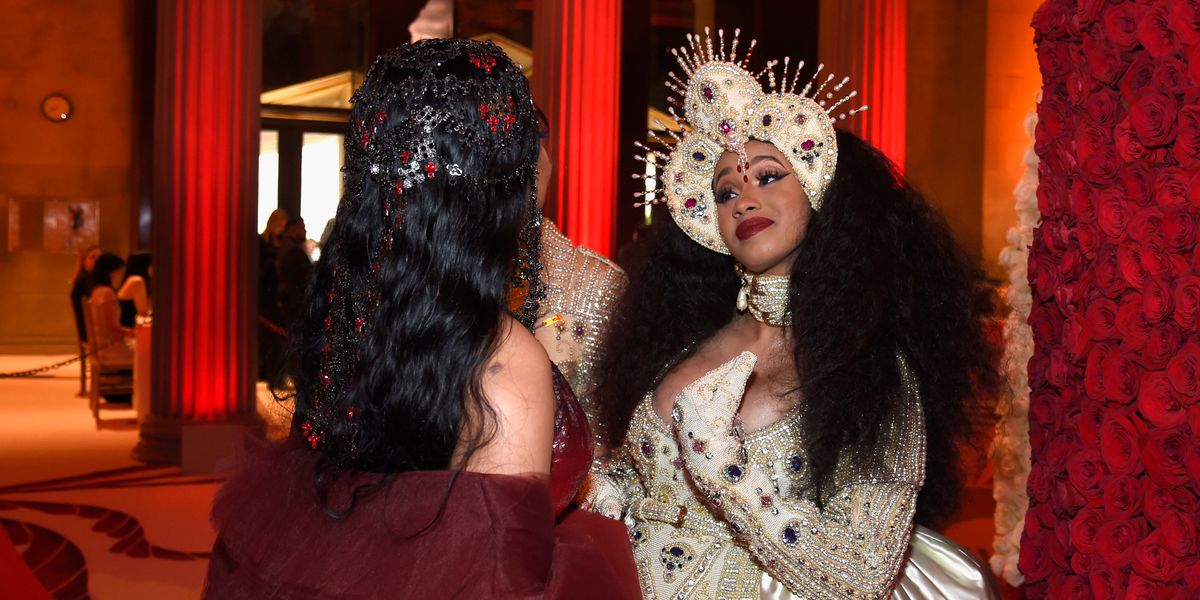 Nicki Minaj has broken her silence following a heated physical altercation with Cardi B on Friday night at the Harper's Bazaar ICONS party, in which Cardi B allegedly assaulted Minaj, throwing her shoe at the rapper. It's been confirmed Cardi B later left the party with her dress torn, and a visible bruise on her face.

On her Beats1 Queen Radio show, Minaj opened Monday's episode by telling audiences that she found the Fashion Week incident "mortifying" and "humiliating," followed by a hailstorm of insults and accusations against the younger rapper. She refuted Cardi B's claims that Minaj made comments mocking the younger rapper's daughter Kulture and her parenting, which Cardi B argues provoked her.

"The other night I was part of something so mortifying and so humiliating to go through in front of a bunch upper echelon... people who have their life together. The way they passed by looking at this disgusting commotion. I was mortified. I was in a Gaultier gown — off the motherfucking runway — and I could not believe how humiliated it all felt because we... made ourselves look—and Imma get back, but before I go, I wanna say that I would never discuss anyone's child. And it's so sad for someone to pin that on me because I'm the bad guy and they're gonna believe them... I would never talk about someone's child or parenting... It's so crazy to me that people always need to make Onika the bad guy. If you're right in whatever you're doing... just speak your truth.

I just want people to know that Onika Tanya Maraj has never, will never... speak ill on anyone's child. I am not a clown. That's clown shit. The other thing is to tell the world something just because you look fucking dumb. You knew that when that footage came out, you was about to look fucking dumb, so your publicist — also looking fucking dumb... they hurried up and put out a statement. I'm such a ill-ass bitch I didn't even feel the need to defend myself that night.

I just want everybody to marinate for two minutes... But we did hear this woman say that nothing's off limits... because she has built her career off of sympathy and payola."

As the episode escalated, Minaj accused Cardi B of ordering attacks on other women and using the term "roaches" to refer to dark-skinned black women. She also called Cardi B "a disgusting pig," and suggested she's suffering from postpartum depression.

"So very often I let a lot people do a lot of bullshit talking about me, and the world believes it. But people don't know what kind of disgusting pig this person is... Let's get up a 1-800 number for postpartum depression. The Lord gave you a blessing of a beautiful bundle of joy, and the only thing on your mind is to attack women?"

"Do you know what the fuck it is to sit in your fucking room for days and hours at a time writing raps?! You came into my fucking culture! I never had to fuck a DJ to play my songs!"

Also during the episode, Minaj shared her condolences for Mac Miller, dragged Kanye West and Lil Pump's "I Love It" collab, (once again) defended her work with 6ix9ine and awarded the (questionably titled) "Cocksucker of the Week" award to Mark Knight, an artist who drew a racist cartoon of Serena Williams for Melbourne's Herald Sun.

Prior to this weekend's incident, the two rappers had denounced rumors of beef.

Well, we know whose side Azealia Banks is on.

Listen to the Queen Radio on Beats 1. Hear excerpts now on TMZ.