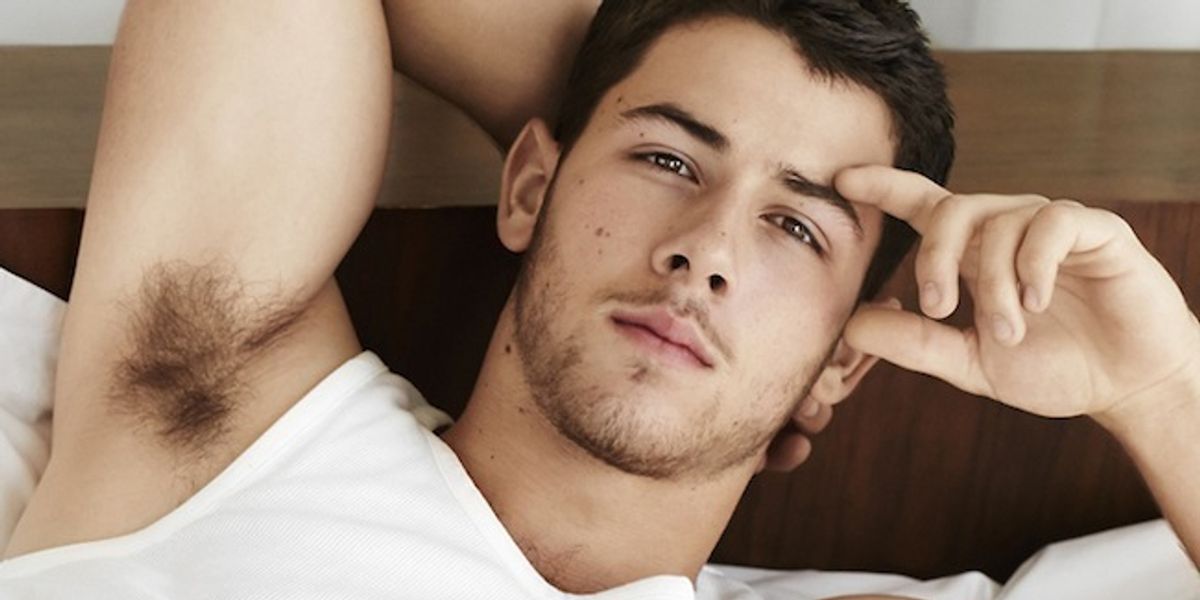 Just So You Know, Fanfic About Nick Jonas' Diabetes Exists

The Jonas Brothers were pretty much the first case of Internet fandom, having come into prominence during the initial boom of early social media in the late aughts, and despite having long-disbanded ravenous admiration for the trio remains discarded throughout the web in the form of fanfiction -- from Camp Rock nostalgia, to pregnancy.

They're abandoned cars, resting quietly on the side of the Internet highway.

But some are able to move past fandom, and sink into the deepest trench of...something.

Such is this case of fan-fiction about Nick Jonas' diabetes.

Yes, this is real.

Nick Jonas was diagnosed with diabetes in 2005, at the age of 13, and as his celebrity grew, he became vocal about his struggles with the condition -- specifically life-threatening circumstances -- and has used his platform to spread awareness.

Upon Googling info about Nick's illness, however, it's not that hard to come across a
a small but sizable pocket of JoBro fans who decided to weave Nick's ailment into some jaw-droppingly specific and unsettling vignettes that run the mill from garden variety chaste Florence Nightengale fantasies, to some POV Munchausen-y delirium.

One scenario depicting Nick's initial diagnosis (Chapter 3. "Diagnosis), from a fanfic collection entitled Living the Dream, is the most intensely detailed (and impeccably structured) of this specific topic.

It begins with the subject line: "The Jonas Brothers are in the prime with their best-selling tour yet. But Nick is experiencing some weird issues on the way. What's wrong with him? Can a girl help him get through it and face his biggest challenge yet to get through and live the dream? "

The chapter begins some sort of medical personnel named "Mrs. Juan," informing Nick of his condition.

"Nicholas Jonas, I'm very sorry but you have Type 1 Diabetes," Mrs. Juan said to me. I couldn't believe it. Diabetes? I didn't even KNOW what that was. So all I could ask her is "Am I going to die?"

Some of the content reads as if the fan has either had first hand experience with this ailment themselves, or was attempting to sound like they do, literally translating WebMD into the story with mentions of multiple IVs. Enter: Kevin and Joe with a teddy bear and a "basket of balloons."

Where are the parents, though?

"Where's Mom and Dad and Frankie?" Kevin said, "They're at Grandma Jonas', so they could learn a little more about...you know...and get some comfort."

After starting to cry, Nick is comforted by his brothers.

"Kevin sat at the side of my bed while Joe grabbed the other chair and sat on the other said. Kevin grabbed my non-IV hand and looked at me, saying, "Look Nick, I know it's really hard for you right now, but it WILL get better. This will NOT stop us, you hear? As long as you can manage, of course."

Things take a terrifying, Mullholland Drive turn in the next chapter, describing a dream Nick has.

"There were two monsters after me; one was a scary looking man that had a t-shirt that said "Diabetes," and the other was Death itself, clothed in a black cloak and everything.
"Come with me, Nick, and you'll live a painful life," the diabetic man said evilly.
"No, come with me Nicholas, and leave this cruel world. It would end all the pain," Death said to me coyly.

A coy reaper; nothing worse.

The story continues on (and on, and on), bringing in newfound love interest and fellow diabetic named "Liz" for Nick who, who after comforting Nick, is invited on tour with the band.

The full point of the fan-fiction is realized when Liz (presumably the alter ego of the writer) exclaims, "Seriously you're inviting me, of all people, to come on tour with you guys?" I ask my best friends Nick, Kevin, and Joe.

-Summary: Sacrafice. It's a mid-evil ceremony to gain power from the Gods. But when evil starts sacarficing for their own selfish reasons, the laws of nature can be change. Its been 200 years since their last victom's blood was shed. Now they need a new victom. One whos is pure of heart and full of spirt. They search long and hard for the one they must sacrafice and find the perfect person....Nick Jonas

-Summary: Nick Jonas is going to a boy scout camp but what happens when a twister hits and he is left to help his friends. Nick is not famious one shot based on a true story

This makes even the most violently unhinged, bloody declarations of love from One Directioners and Beliebers look positively...sane, and that's saying a lot.