N.Hoolywood: By Land and By Sea

Martin Marks
PAPERMAG
11 February 2012
Last night, in a sepulchral wood-paneled room at La Venue, Japanese designer Daisuke Obana presented his N.Hoolywood F/W 2012 collection. The show was set to the sound of haunting sea chanteys, a curious choice, which I had the opportunity to ask Mr. Obana about backstage. "They're old fishing songs," he said through a translator, "A mix of eight of them, which I found at a record shop in San Francisco."
Thoroughly steeped in a sense of nostalgia, the music choice was highly appropriate. Mr. Obana cited Ernest Hemingway as his point of reference this season, specifically, the novel Old Man and the Sea. "In Japanese, the book reads very differently," he explained. "It's still very moving to me." Through this lens of translation, any number of influences--old photographs of Leon Trotsky, the early film work of Leni Riefenstahl, the handsomeness of Swiss mountaineers--kept coming to mind. In working through these images, Mr. Obana's latest work seemed to be bounded by two elements:
By Land
With heavy ranch coats and wide-gaited slacks, there was an agrarian, proletariat aesthetic to the collection--and not just because most of the models were bearded or mustachioed, like various incarnations of Papa Hemingway himself. This proletariat appeal could especially seen in a charcoal gray half-coat, its neck buttoned and its waist cinched by a wide black belt. Khaki army parkas paired with gray slacks and brown rain boots almost seemed sepia-tinted, like Mr. Obana was colorizing an old black and white photo using his imagination alone.
By Sea
As the show went on, a checkered gray suit with three pockets and a 1920s Parisian look about it gave way to mariner stripes and navy pea coats, slouchy denim overalls, and a zig-zag of vintage blue, as seen on a blouson and shorts. We were now at sea. But a drab this journey was not. With beige high-neck cable sweater and mustard yellow fisherman's coats and rain slickers, Obana tinted his work with a hint of Tintin-like playfulness. No matter what the source of the collection, or the lens of translation, the clothes were extremely handsome, and as masculine as the fisherman on Mr. Obana's old record.
PLUS:
All of our New York Fashion Week coverage, in one spot! 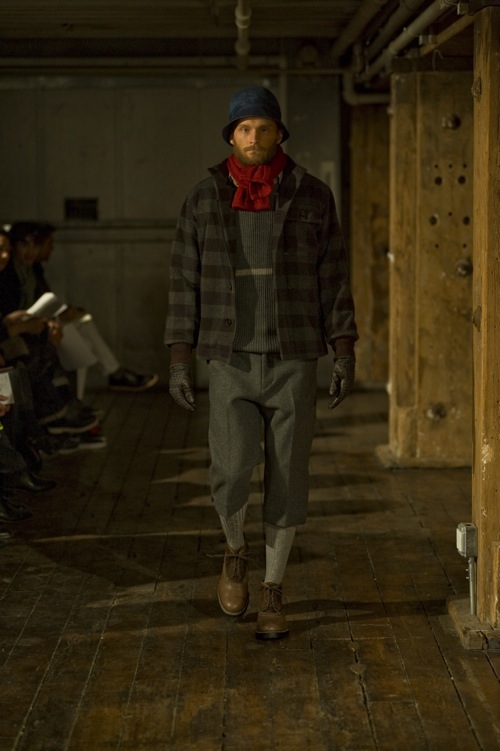 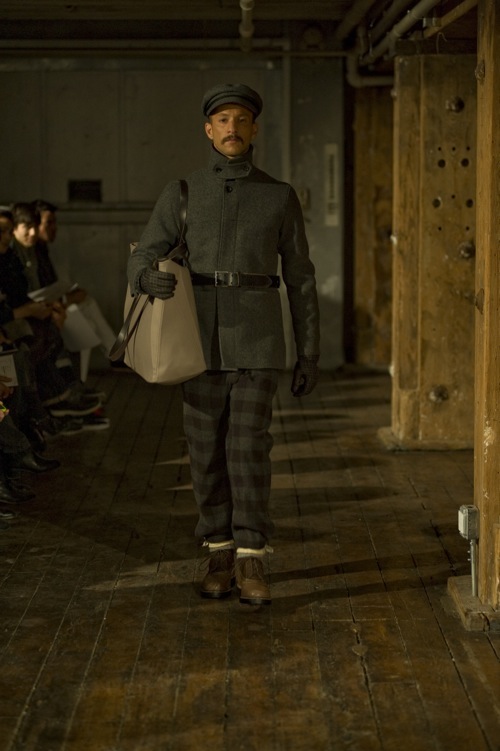 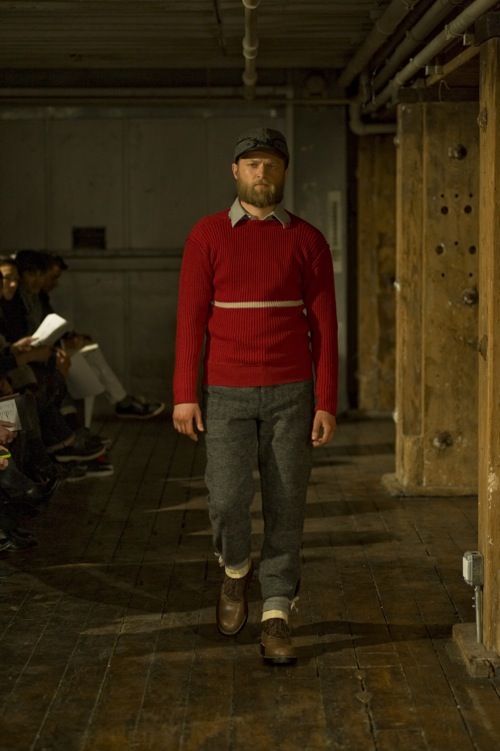 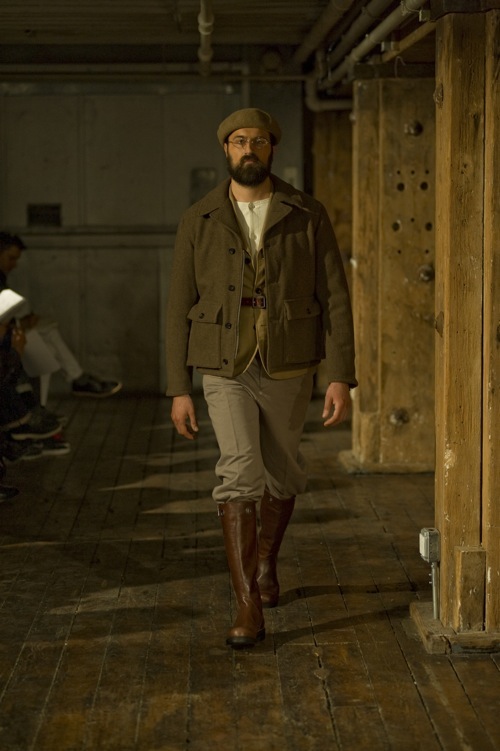 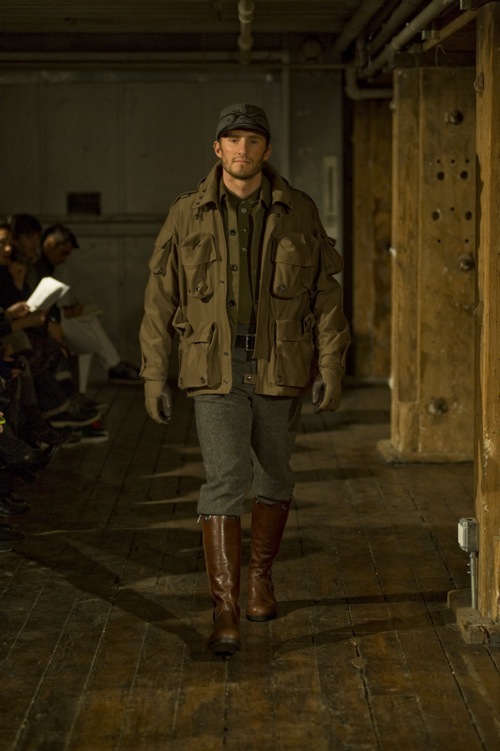 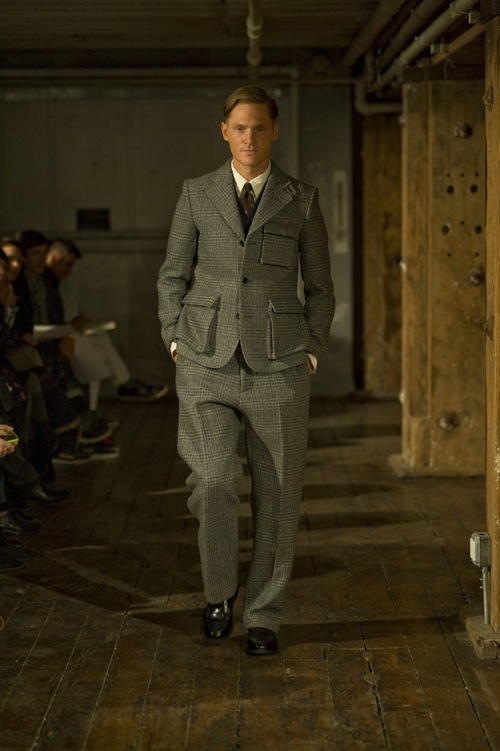 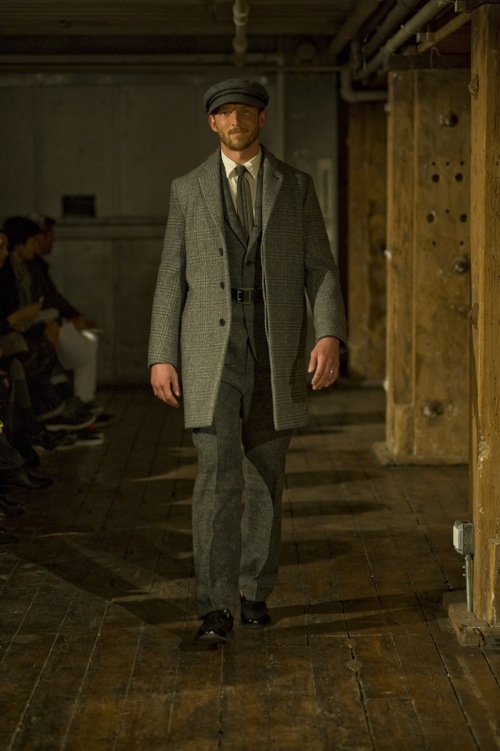 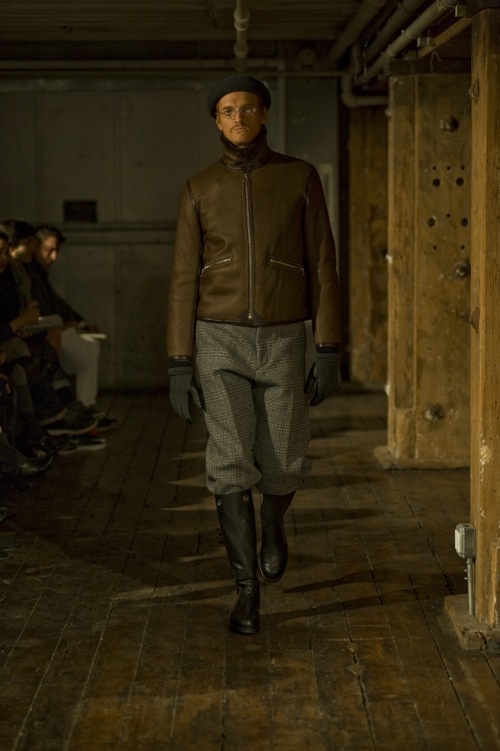 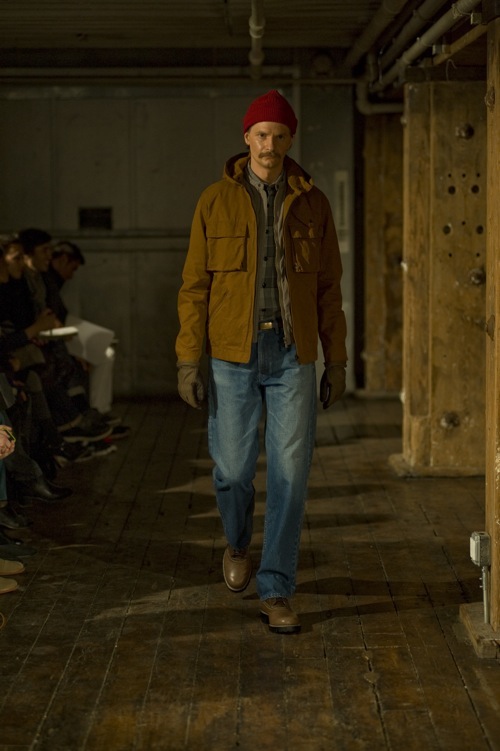 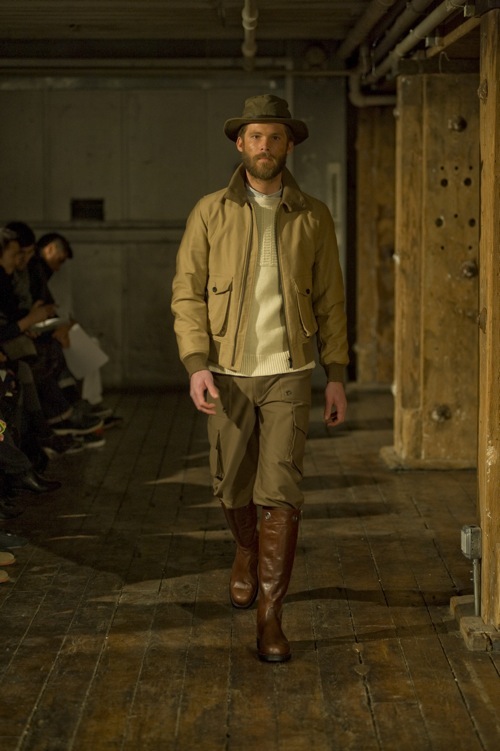 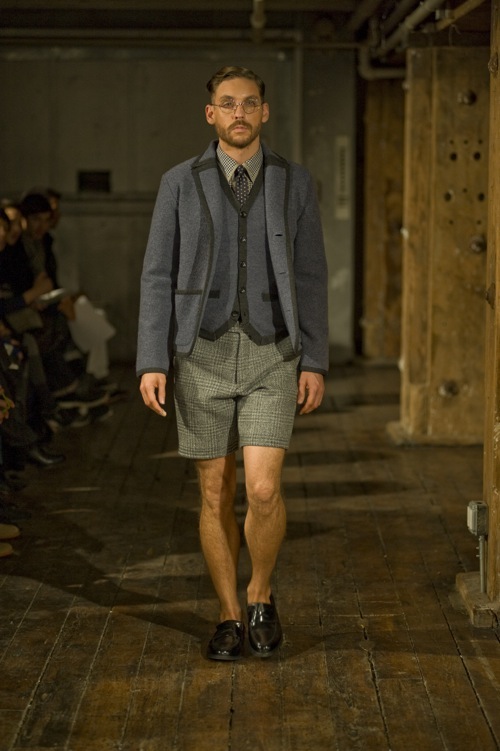 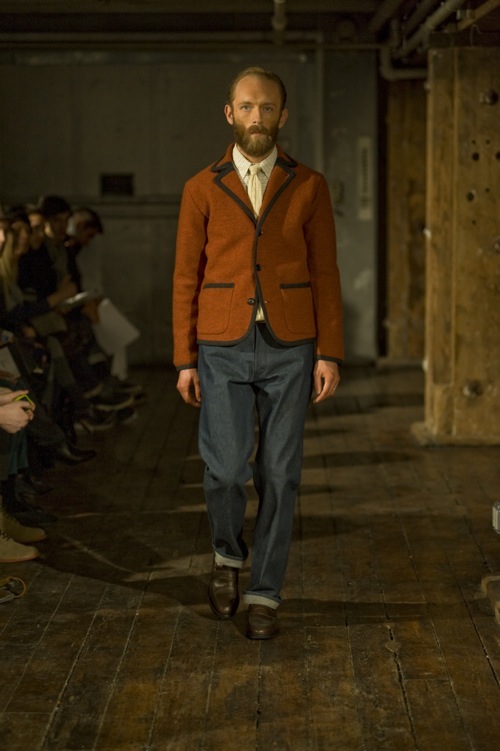 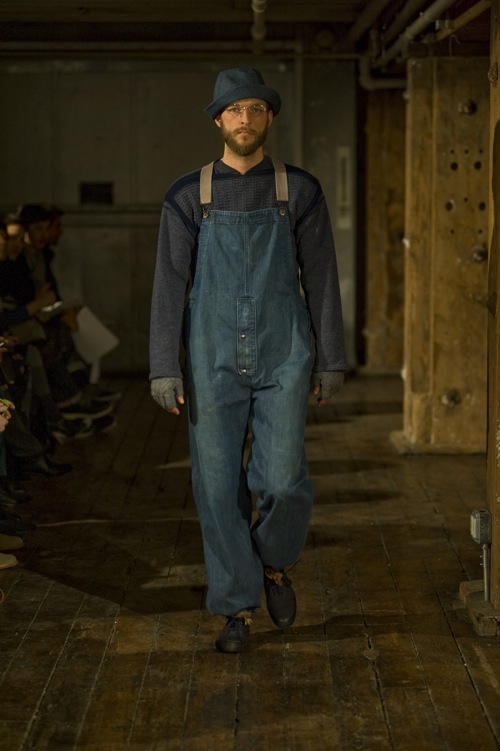 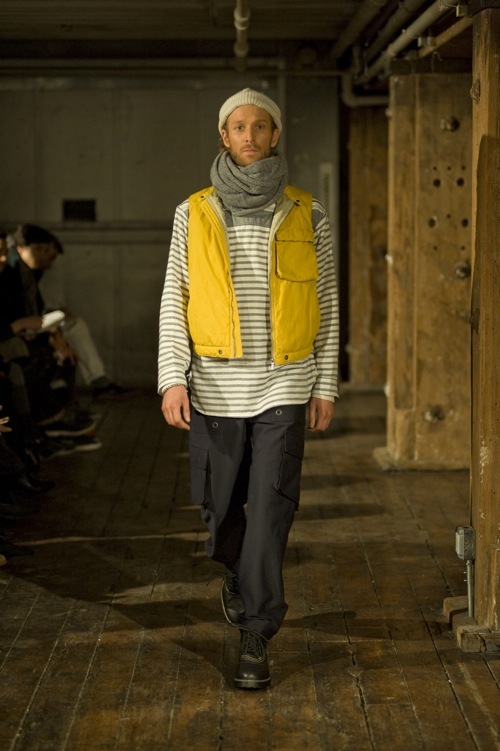 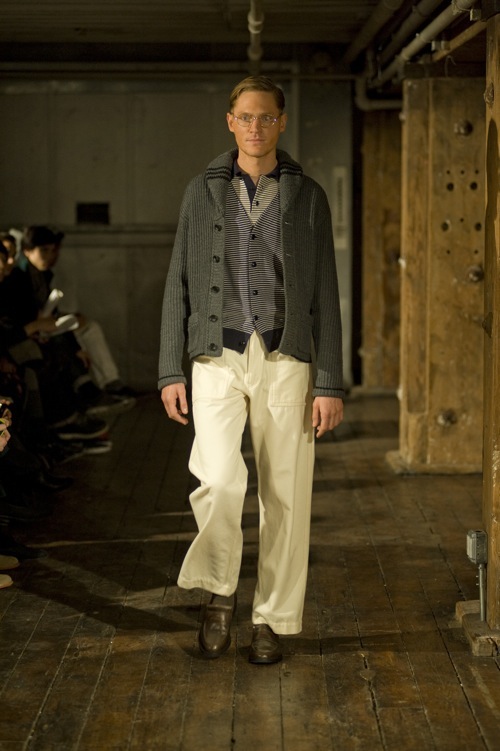 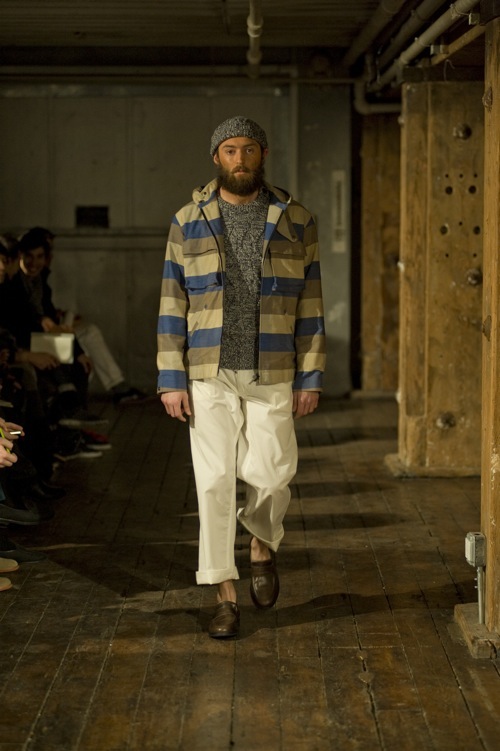 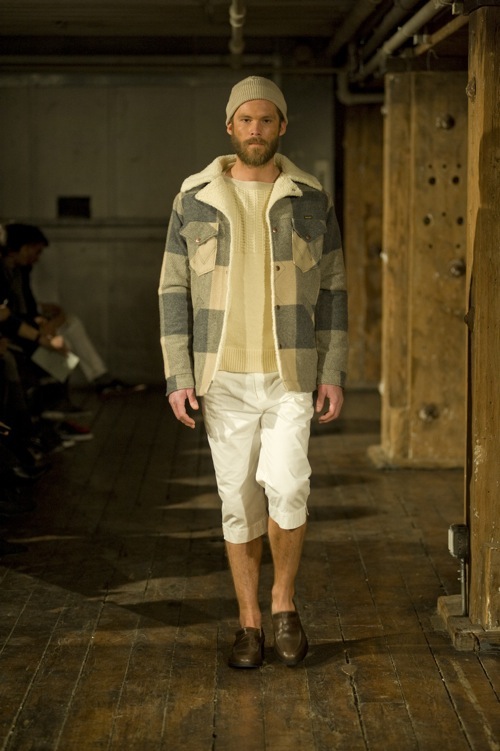 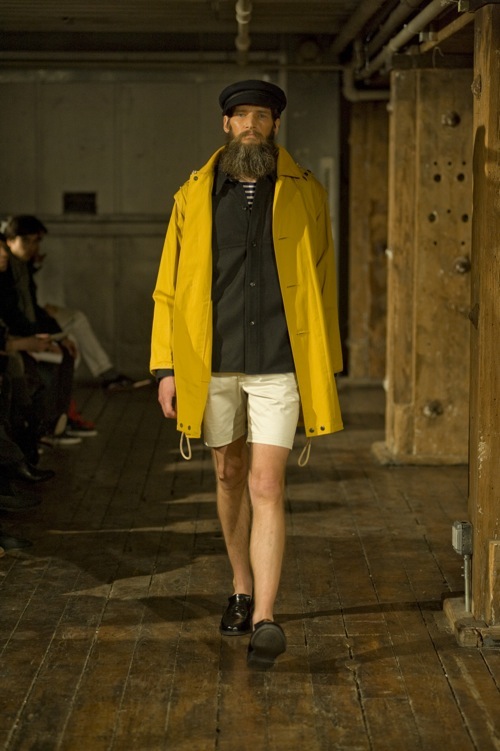 The Long Road to Anamanaguchi's '[USA]'