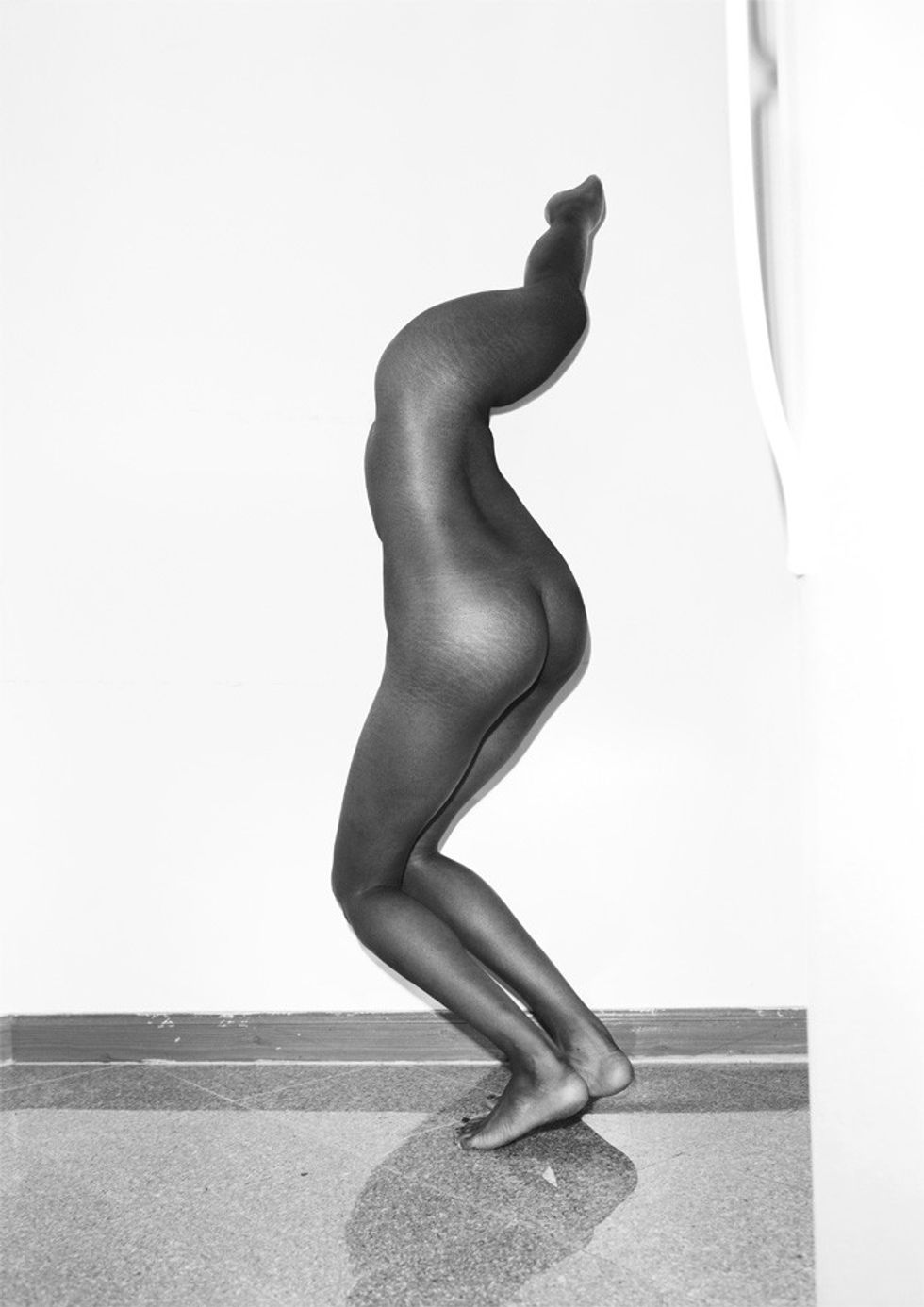 New Nudes: Six Young Photographers Who Are Putting a Fresh Spin On the Naked Body

An image from Synchrodogs' Reverie sleep series.
Working under the name of Synchrodogs, Ukrainian artists Tania Shcheglova and Roman Noven's work hits you like a lucid dream. Naked women meld into undulating fields and rocky terrains or emerge out of cacti and caves; the bodies become pale, sculptural entities in the midst of gorgeous landscapes, emanating light, swaddled in fabric, or painted in neon bright colors. Together, the photographers have published two books of their work, the eponymous Synchrodogs and Byzantine, and created original imagery for publications such as New York Magazine, Dazed & Confused, AnOther, and various editions of Vice. Within their pictures, the body becomes an otherworldly, sacred entity but one that is still grounded in the natural world. "Naked is sheer, naked is true, naked is faultless," Shcheglova tells us over email. And "art should not be obvious at all," she adds. "It is not about depicting something, it is about exploring ourselves."

Photos by Andi Galdi Vinko above and below

There's a similar sense of thoughtfulness and exploration in the work of the young Hungarian photographer Andi Galdi Vinko. The past year has been a big one for the London-based artist, with her work having been exhibited in group shows in Budapest, London, and NYC, and featured in Harper's, the New Yorker online and here on our site. Her photos, though almost documentarian in style, give cause for a double take, like a high-flash Vivian Meyer with a surrealist twist. Hair extensions and glitter explode out of unlikely orifices, a pair of gymnastic performers invert themselves into an eight-limbed monstrosity, and everyday scenes and objects intersect into the otherwordly, like a father with his naked son atop his shoulders creating the illusion of one extended butt crack down the length of his back (above). "I really like grotesque forms, compositions, and situations," she explains, "I think weird and surreal adds to reality." Through her work, Galdi Vinko has created her own comedic language, exposing the ridiculousness of her subjects, while also underscoring her love for them. "I have personally always been more attracted to things that make me feel strange or make me want to go back and understand it," she says.

Photo by Alva Bernadine from her "Round Mirrors" series
While Galdi Vinko's work lightheartedly liberates the nude form, London-based Alva Bernadine addresses the issues surrounding its objectification. The artist, who describes himself as a "one-man subculture," has exhibited work at Nue Galerie in Paris and published a book of erotic photography, Twisted. In his series "Round Mirrors," womens' naked bodies are reflected back to them through multiple, small mirrors, each body part recognizable but slightly distorted. Seeing this sexually-charged depiction of the body fractured into its smallest carnal components, it's easy to feel complicit in the male gaze, which may be the point. According to his website, the images force viewers "to fill in the missing bits of the body," to construct their own narrative from everything that is absent.

Dutch photographer Melanie Bonajo's images tease out similar issues of societal constraint, albeit with a much more direct and unflinching eye. Her work has been exhibited at places ranging from the De Appel Arts Center in Amsterdam to the Kohun National Museum of Contemporary Art in Seoul. Bonajo's series, "Furniture Bondage," treats the female form as little more than a building material in the creation of her domestic sculptures. In her photos, women are leashed to chairs, ladders, and cleaning supplies, and then manipulated into BDSM-esque positions with bags over their heads or blindfolded. The models become slaves to the household products meant to serve them. While her work may appear to be a blunt commentary on the emotional, cultural, and physical baggage we all carry with us through life, Bonajo insists it's "really about trust." It's about the models' trust in her, in themselves, and in this situation that they're surrendering to while also remaining vigilant, upholding their precariously balanced structures. As trapped as these women may seem, there is still a persistent feeling of imminent self-liberation. In the artist's words, "the female I like to represent is an assemblage of [the] human-animal-object-world rising up in response to human civilization."

Photo by Ren Hang
Where Bonajo's nudes are all about the underlying implications, Ren Hang's women are far more blatant and direct. The Chinese photographer, who has three international solo exhibitions this spring, including one that just closed at NYC's Capricious 88 gallery, creates images that present a fearless, overt sexuality with an underlying perversion (sort of like a Ryan McGinley picture on mushrooms). Women contort into geometric shapes, animals stand in for apparel, and bodies clash with nature to create a hallucinatory effect. Though Hang claims his pictures are inspired by "the boredom of life," there is an undeniable pleasure to his work. He makes his pictures "because sex is my favorite. I want sex bad when I see [a] nude human," he tell us. Though it might be that cut and dry for Hang, for the viewer his imagery is more fraught, obfuscating the line between body and object.

Of all six artists, Asger Carlsen makes work that exists most in a realm all its own. The Dutch-born New York-based photographer, whose had solo shows internationally and been profiled in publications such as the New Yorker, Interview, and New York Magazine, makes nudes that are more abstract sculpture than human body. Like nightmarish Francis Bacon paintings come to life, his naked figures become warped and distorted, mushed up like a ball of Play-Doh and thrown into abandoned rooms to collect dust. As grotesque as his bodies can be, there is still an element of the hyperreal in his work. "I'm not interested in deformity," he tells us in his Chinatown studio. "I'm interested in things that look really complicated...that don't necessarily reveal themselves." The photographer's focus lies in experimenting with form, shape and the technicalities of manipulation rather than catering to any individuals' hangups or revulsions. "There's an awkwardness in [my work]," he asserts, "not that I feel awkward, but there's a feeling that I never really belonged to anywhere or anything. [My work] helps me find a place to belong."