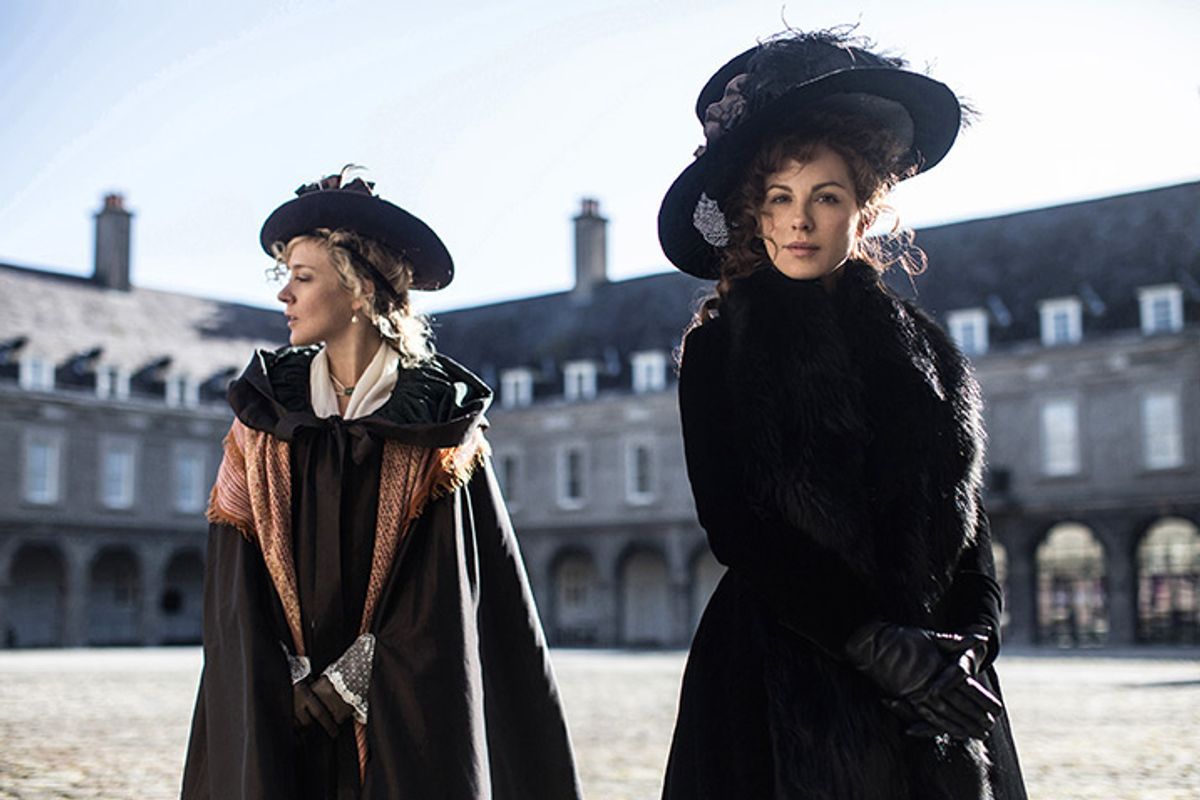 The 5 Movies to See In May

Jane Austen meets Mean Girls in Whit Stillman's wryly amusing adaptation of Austen's book Lady Susan. Set in the 1790s, Kate Beckinsale is the beautiful, wickedly flirtatious, widow Lady Susan Vernon, who, while impoverished herself, moves from relative to relative craftily plotting to marry off her sweet daughter Frederica (Morfydd Clark) and causing havoc with her own seductive charms. She has just moved in with another in-law and sets her own sights on the handsome Reginald DeCourcy (the excellent and handsome Xavier Samuel), much to his family's horror. Chloe Sevigny is quite delicious as her friend and partner in crime Alicia Johnson, whose husband (Stephen Frye) threatens to banish Alicia to Connecticut is she keeps hanging out with Lady Susan. The scene-stealer in the movie is Tom Bennett as the boobish but wealthy Sir James Martin, who is intent on wooing Frederica, much to the girl's horror. This may be period costume but there a witty, modernistic, spin on these schemers and dreamers.

A sensational documentary by Josh Kriegman and Elyse Steinberg about Anthony Weiner's run for Mayor of NY in 2013. Weiner was a scrappy firebrand of a politician who served as US representative but was forced to resign in 2011 over a humiliating sexting scandal. His decision to enter the scary political battlefield again, two years later, is supported by his wife Huma Abedin, a longtime aide to Hillary Clinton. But more embarrassing photos surface, yet again, and the campaign implodes. Why Weiner continued to forge ahead with his campaign or let a film crew follow around documenting all this is either incredibly brave or foolhardy, but it makes for a fascinating, often cringe-inducing, cinematic experience.

Many have tried to bring visionary author J. G. Ballard's 1979 novel to the screen, but leave it to wildly talented Ben Wheatley (Kill List) to give it a shot. Tom Hiddleston (always great) plays Robert Laing who moves into the ultra modern luxury building that is divided floor by floor much like the rungs of social class strata- the top floors only for the elite. Including the mysterious architect of the building- Anthony Royal (Jeremy irons), who resides on the top floor and befriends Laing. But eventually the residents descend into revolt, violence and anarchy. Let me be honest- -- the movie's a bit of a mess, but a fascinating one. When the chaos breaks out, the film's wheels just spin. But who the hell will ever make another movie out of Ballard's chilly, dark fantasy of modern urban life? The cast is terrific, and features Sienna Miller, Luke Evans, Elisabeth Moss and James Purefoy, and there are wonderfully fucked up, genuinely twisted moments. So see it anyway.

Casey (Elma Begovic), Jill (Annette Wozniak) and Kirsten (Denise Yuen) have traveled to Costa Rica for a bachelorette blowout to celebrate Casey's upcoming nuptials to Jared (Jordan Grey). But a hike to a remote lagoon and a refreshing dip results in "just a little bite" from something in the water. And after returning home Casey begins to physically change, and not in a glowing "bride" sort of way. Director Chad Archibald's icky chiller harkens back to similar body horror films by David Cronenberg with a viscous difference: The inside of her apartment begins to change also, into a slimy living cocoon for all these fish egg-like creatures expelled from Casey's body. I wouldn't want to be a Girl Scout selling cookies at her door. The movie's indeed flesh crawling fun.

Director Terence Davies (Distant Voices, Still Lives) brings his lyrical poetry to this sturdy adaptation of Lewis Grassic Gibbon's novel of a headstrong girl and the harsh realities of rural Scotland life in the early 1900s. Chris (Agyness Deyn) dreams of an education but the death of her brutal religious maniac of a father (Peter Mullan) lands her with the job of running her farm. She does find love with a sweet farmer's son Ewan (Kevin Guthrie) but he is goaded into joining up during World War I and comes back a terribly changed man. The cinematography by Michael McDonough is lush and gorgeous and Davies has great sympathy and tenderness for his lead protagonist and the unforgiving Scottish terrain.