Neuroscientist Daniel Levitin Explains Why Multitasking Is a Harmful Addiction 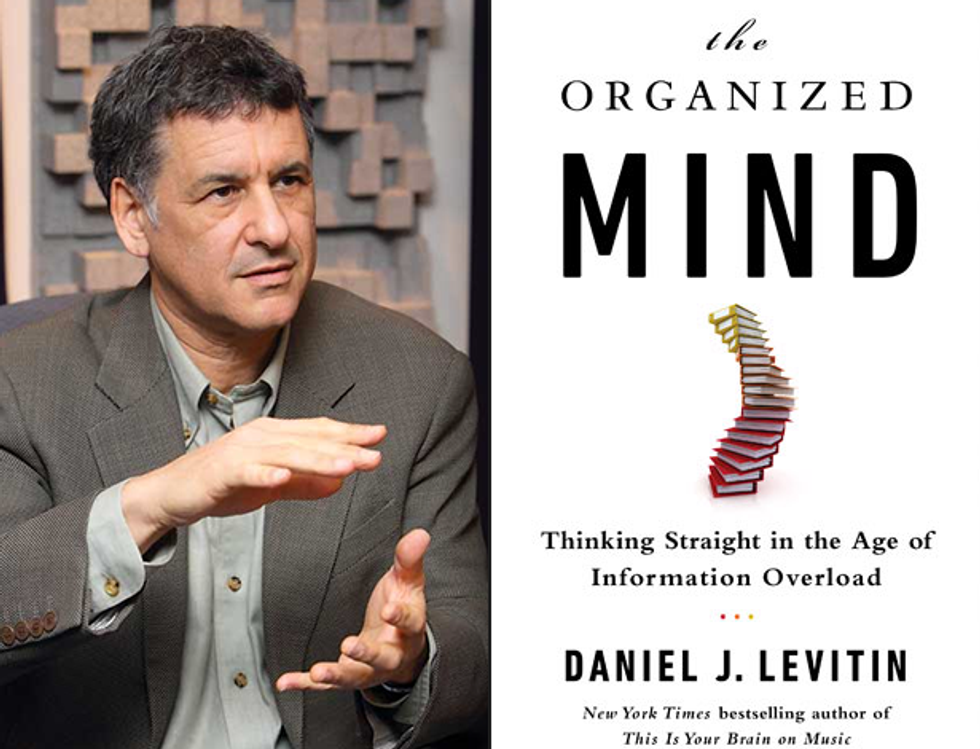 A scientist/musician/author/record producer is how Daniel Levitin thinks of himself. But more formally, he is also the James McGill Professor of Psychology and Behavioural Neuroscience at McGill University in Montreal, where he runs the Laboratory for Music Cognition, Perception and Expertise. After writing Your Brain on Music and The World in Six Songs, his new book, The Organized Mind: Thinking Strange in the Age of Information Overload, continues his efforts to translate neuroscience to a general audience, this time with practical advice on how to manage your time, emails, sleep, multitasking, all the evils of modern life brought on by TMI. Here, we talk to Levitin about his research including why we can't stop multitasking and whether music helps you study.

Let's talk about your research that says the brain wasn't designed to absorb as much information as we're absorbing today.

By some estimates, scientists have generated as much information in the last 25 years as in all of human history before that. Information overload is real. I think we have to impose a little bit of filtering on our own lives so that we don't get distracted by things that we don't want to be.

I'm interested in what you call offloading where you can manage all this information by not having to remember everything, by writing it down on index cards instead. I've been doing that and i think it really works. It frees me up but now I have this strange state of mind where I'm thinking, "Why aren't I worried about anything?"

You raise an interesting point in that you find yourself in this disoriented state where you're not worried about things and that feels unnatural or you find you have time on your hands and that feels unnatural. There's this addictive quality to the over-caffeinated, multi-tasking mode that many of us find ourselves in these days. There was a study that came out too late for me to put into the book that's relevant to this -- people came into a laboratory and they were given the choice to either just be alone with their own thoughts for a few minutes or receive a mild electric shock.

And everybody wanted the shock.

Men more than women, but not just twenty year-olds. People all the way up to 70 were in the study. People chose the shock because the idea of being alone with their own thoughts was very uncomfortable. I hate to sound like an old fogey but I think that life is more rewarding and more enriching and pleasurable when you actually have time to contemplate a bit. Walking promotes daydreaming. It allows you to hit a neuro reset button in the brain.

Do you find resistance to your ideas about multi-tasking because that's become so prevalent and actually something that people brag about. They feel, "I'm a multi-tasker, I can do everything!"

I think they are habits that are hard to break because there's a neuro-rewards system. This multi-tasking and all this task switching depletes glucose in the brain, which causes us to get cloudy-headed and tired. We feel depleted because we've literally depleted these chemicals. Each time we task switch to get some new piece of information, like a new email or a new text message, our newness detector starts firing and that's where the dopamine comes in. The dopamine rewards circuit is what's responsible for people getting addicted to cocaine and heroine. So, the idea is people are going to be resistant because it feels like they are multitasking, and it feels good. But multi-tasking doesn't work -- people get less done. They think they are getting more done but their judgment is off. Not only do they get less done but their work is less creative.

Sleep is another area that you've spent some time looking into and you've concluded that short naps, even ten minutes, can really help in getting the brain back into that default mode or giving it a chance to relax.

There are two different advantages. One is that taking a nap really does hit a neural reset button. It loosens and relaxes some circuits that have gotten tightly bound up and it replenishes base line levels of glucose, and other chemicals in the prefrontal cortex. The second thing it does that's not obvious is related to nighttime sleep. What happens during nighttime sleep is that your brain is consolidating the memories of the previous day by making links between them and other things you've experienced. It's a kind of pre-processing prior to them being stored in your long-term memory forever. With the amount of information coming at us it's often too much for our brain to accomplish in a single night's sleep, but a nap can do some of that pre-processing for you and ease the burden for nighttime sleep. That's one of the reasons it helps you to feel so restored.

With regard to decision-making you write that if there are too many elements in play the brain turns off. Can that be applied to a Powerpoint presentation, for example?

Yes, I would agree with that. The conventional wisdom about presentations is you're going to get people to remember three ideas. That's consistent with what we know about working memory, which is that the limit is about four ideas. If you aim for three you can hope that they'll get all of them.

Does music help one concentrate?

You know, this is the most studied topic in all of contemporary psychology because every high school student and college student that's given an independent experiment to do, does this one! It's very clear that music is a distraction for most people, and it makes the studying more fun but there's not evidence that it makes them study better.

But is it worse? Is it a negative as well.

One of my son's middle school art teacher lets students listen to headphones in class. Is that actually distracting the students?

Music is not bad for everything. It's actually an advantage for driving. It might be an advantage for people doing visual art... I can see that. The thing about driving is that once you've learned to do it your brain more or less does it automatically without you having to consciously think about every little thing. Whenever we have something automatic like that, it lowers our arousal level because it's boring. If you don't have something to think about or keep you challenged, the reduced arousal can lead to accidents or problems. The thing about music is, if you choose the right music -- not something that's going to put you more to sleep and not something that's going to be so engaging that you'll want to close your eyes or take your eyes off the road -- it can raise your arousal level just enough to keep you vigilant and alert. Now for painting I can imagine the current thinking is that there are different physiological centers for visual input and auditory input and processing. I can imagine that you can listen to music and paint and that they won't interfere with one another and they may even help one another. But if you're trying to study math or read literature or something like that, the evidence is that music is a detriment for most people under most circumstances.