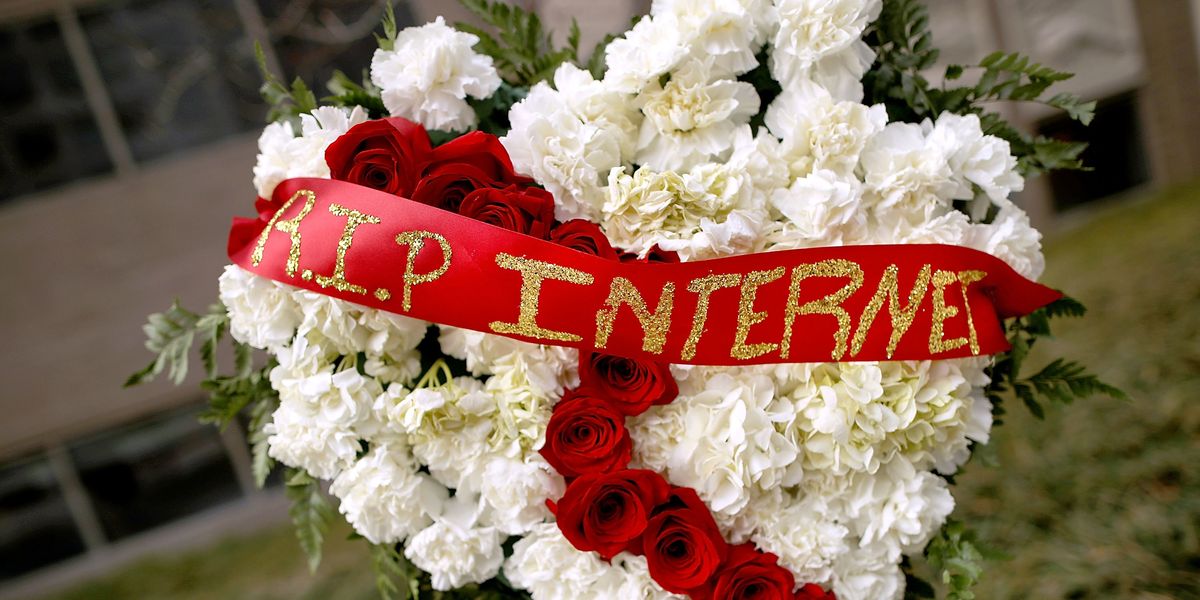 It's Not Over: Here's How You Can Still Save the Internet

This is bad news that we unfortunately saw coming from a mile away. Trump's FCC chairman, Ajit Pai, promised to repeal the laws that keep the lanes of the Internet relatively toll free. The principle of net neutrality, which basically says the companies that sell access to the internet don't get to influence how people use it, has been up for debate before, but never like this. (The ACLU calls the vote a "radical departure" from policies of the past). This site has a handy infographic to break it down if you're more of a visual learner.

Now, Internet service providers (ISPs) like Comcast, AT&T, Spectrum and Verizon (which together own all or parts of a whole slew of companies like AOL, Yahoo, NBC Universal, Condé Nast, Tumblr, Hearst and the Huffington Post) will be able to promote or block content as long as they publicly acknowledge that they are doing so. Like putting a "smoking kills" sticker on a packet of cigarettes or calling the president a Cheeto, we all know labeling toxicity does nothing to fix it.


The major corporations that sell access to the Internet at the clear winners here. Those who support the repeal of net neutrality have framed it as a typical regulation issue, arguing that the former laws put an undue burden on businesses. Websites owned by ISPs (including media and news sites run by Condé and Hearst, including Vogue, The New Yorker, GQ and Complex) may benefit, and proponents of the repeal argue what most who favor deregulation do: that allowing big businesses to make more money will in turn equal more investments and improved technology that will ultimately benefit the consumer.


Startups, for one. In November, hundreds of companies including Airbnb, Foursquare and Etsy signed a letter to Pai urging the FCC not to repeal net neutrality regulations, noting that deregulation could put small and medium sized businesses at a significant disadvantage. Major (but independent) companies like Google and Netflix have also come out against net neutrality. Companies competing with ISPs may need to pay more to get the fast network speeds consumers have come to rely on.

"Without these rules, Internet service providers will be able to favor certain websites and e-businesses, or the platforms they use to garner new customers, over others by putting the ones that can pay in fast lanes and slowing down or even blocking others," the letter states.

We're disappointed in the decision to gut #NetNeutrality protections that ushered in an unprecedented era of innovation, creativity & civic engagement. This is the beginning of a longer legal battle. Netflix stands w/ innovators, large & small, to oppose this misguided FCC order.
— Netflix US (@netflix) December 14, 2017

According to the LA Times, a trade group representing Amazon, Facebook, Google and other companies said in an FCC filing that fast lanes and repeal of net neutrality would lead to the "cable-ization" of the Internet, because online content providers will negotiate deals (which could look a lot like cable bundles to consumers) to reach their customers effectively and at high speeds.

How much consumers will be affected is to be determined. How much trust do you place in major corporations to look out for your best interest? By giving ISPs the power to block or prioritize certain content, the FCC has ushered in the end of the era of a free Internet, a digital revolution that has given the public unprecedented access to both information and each other.

Despite the widespread panic you may have seen online, most Internet subscribers won't see changes right away. Companies probably know that people are pissed and are going to do more of a slow creep onto our screens and into our lives rather than an immediate assault. As political commentator and former Obama speechwriter Jon Lovett put it, the ISPs are "like raptors testing the fences." Now that the fences (net neutrality) are coming down, the only thing holding them back is us.


Well, you can always panic or take up a second life as a hacker to escape the system. Or, you can do what we all should be doing anyway: engage your representatives. Though the FCC voted to repeal the law, it still needs to be approved by Congress. Pro-net neutrality members (there are a few, amazingly) will now press to use a relatively new tool called the Congressional Review Act (CRA) to undo the FCC's actions. The CRA gives Congress 60 days to reverse regulatory actions. So, Americans have 60 days to pressure their representatives to undo this hasty action by the FCC.

If that doesn't work, then the states may have some pull. The ACLU, for instance, has been working with state and local leaders to work on the issue and enact protections to signal to the federal government that America won't let this happen. New York's attorney general says he'll lead a multi-state lawsuit against the FCC. All hope is not lost, but now is the time to be more engaged than ever.

Since we're a generation that hates speaking on the phone, here are some tips and tools for making that process easier.