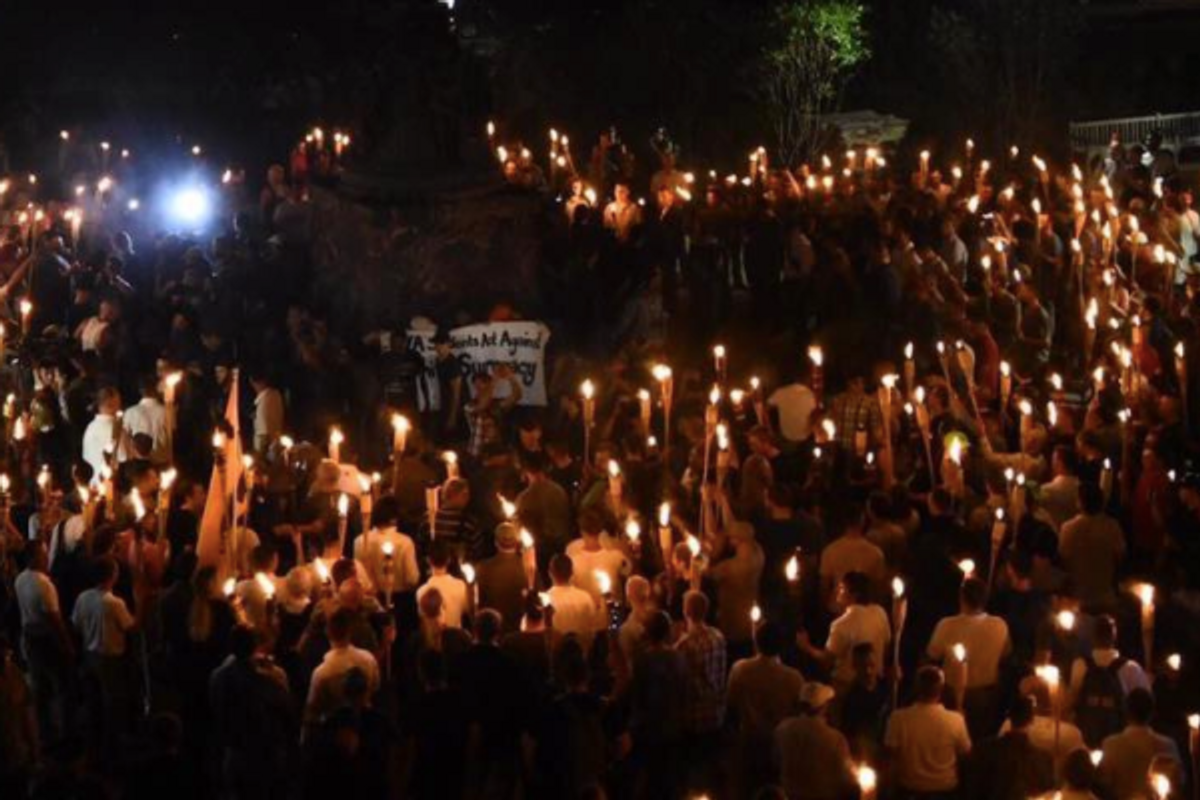 At least seven people were hurt when a speeding car slammed into crowds gathered near the site of the dispersing rally and continuing chaos. It's been reported that one person has died as a result of the violence in Charlottesville, though it has not yet been confirmed what caused the death.

President Trump did speak on the situation, writing on Twitter:

We ALL must be united & condemn all that hate stands for. There is no place for this kind of violence in America. Lets come together as one!
— Donald J. Trump (@realDonaldTrump) August 12, 2017

Am in Bedminster for meetings & press conference on V.A. & all that we have done, and are doing, to make it better-but Charlottesville sad!
— Donald J. Trump (@realDonaldTrump) August 12, 2017

In a press conference from New Jersey (where Trump is currently on a 17-day golf vacation), Trump condemned violence and hate without specifically mentioned white nationalists or the alt right.

What is vital now is a swift restoration of law and order and the protection of innocent lives.#Charlottesville pic.twitter.com/DB22fgnu6L
— Donald J. Trump (@realDonaldTrump) August 12, 2017

Last night, hundreds of (tiki) torch bearing white nationalists, led by Richard Spencer, descended upon the University of Virginia campus, shouting racist slogans like "Jew will not replace us" and assembling at a statue of Thomas Jefferson. Campus police eventually broke up the rally, arresting at least one person and scuffling with some of the nationalists. This was in advance of a planned "Unite the Right" rally today in Charlottesville that quickly descended into chaos as white nationalists, self-described white supremacists and other alt-right groups clashed with counter-protestors.

When a journalist asked one of the white supremacist from #UniteTheRight to state a source for a bogus claim, he gets assaulted. #FreeSpeech pic.twitter.com/NP6TYaCB8h
— Tariq Nasheed (@tariqnasheed) August 12, 2017

Governor Terry McAuliffe declared a state of emergency, and according to reporters on the scene, things appear to have mellowed a bit - for now. The rally itself, which was originally a response to the city voting to sell a statue of Confederate General Robert E. Lee, has been cancelled due to the violence.

Another group of alt-right coming to Emancipation Park. Being yelled at by counter-protesters #UnitetheRight pic.twitter.com/JUN1YfkAXq
— Lauren Berg (@laurenbergk) August 12, 2017

Some Republican leaders have spoken out against the violence but not the nationalists themselves, many of whom were openly praising Hitler and the KKK. Paul Ryan, for instance, walked a fine line of decrying the situation without actually specifying which views he disagrees with:

The views fueling the spectacle in Charlottesville are repugnant. Let it only serve to unite Americans against this kind of vile bigotry.
— Paul Ryan (@SpeakerRyan) August 12, 2017

Our country encourages freedom of speech, but let's communicate w/o hate in our hearts. No good comes from violence. #Charlottesville
— Melania Trump (@FLOTUS) August 12, 2017

Professional tweeter President Donald Trump has so far remained silent on the matter. Maybe he got locked out of his account because he forget his password and never set up two factor authentication. Maybe he's soaking up one of the many days of his golf vacation. Maybe he's busy googling "who won the Civil War?" or "where is Venezuela?" It's hard to say at this point.