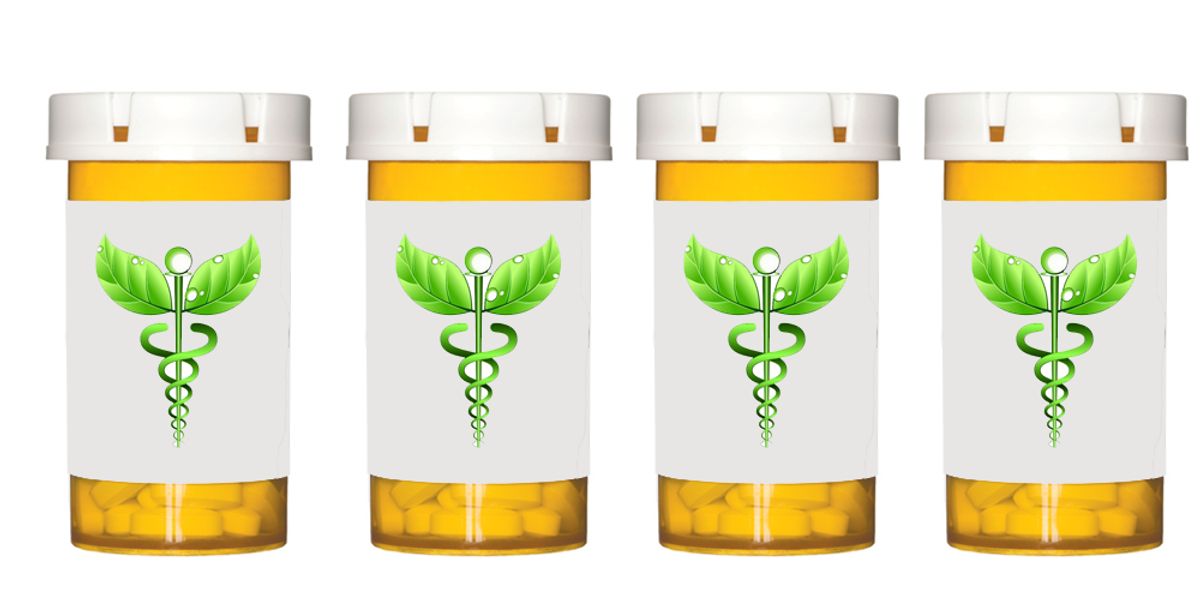 Plant Medicine: A Natural Pharmacology Primer for Anxiety and Depression

A diagnosis of depression or anxiety, whether minor or severe, can make you step back and question if what you're doing to take care of yourself is enough. Pharmaceutical intervention may be suggested by your doctor alongside (or instead of) talk therapy. But while SSRIs and other psychiatric drugs have saved millions and millions of lives and are the best treatment option for some, they're also incredibly complicated, with mild-to-severe side effects including everything from sleeplessness to weight gain to inability to orgasm to lactation and suicidal thoughts. Needless to say, antidepressants are not necessarily right for everyone.

Depression and anxiety are generally interpreted as chronic illnesses -- mediation and treatment may be required continuously. 'Cures,' so far, are unlikely, and a certain amount of management may be required in order to lessen the symptoms that affect your daily well-being. And just like pharmaceuticals, some herbs are more useful than others in the treatment of specific symptoms -- kava, for instance, quells panic attacks quite efficiently at the time of application, while St. John's Wort might require several weeks of daily supplementation to function as a mood stabilizer.

Diet, exercise and sleep can also greatly contribute to a sense of overall wholeness and well-being, but it's very hard for most people to find the time, energy and resources to accomplish all that while working, living, and attending to any medical treatment one might be receiving for their condition.

The point is, depression sucks. The goal, whether through pharmaceutical intervention, natural supplementation, or diet and exercise, is to safely experiment until you find anything that works to make you feel the best you can.

This supplement, derived from the seeds of the Griffonia simplicifolia shrub, is most commonly seen alongside melatonin in over the counter natural sleep aids. And while 5htp (or 5-hydroxytryptophan, yes, like the stuff in turkey that makes you sleepy at Thanksgiving) can certainly help with insomnia or sleeplessness, it's also, according to some, a powerful antidepressant. 5htp's job is that of a precursor to serotonin production— it's often used by people coming down from MDMA to avoid the inevitable serotonin crash, but it's just as effective in regulating serotonin levels in people experiencing depressive states. People also claim that it regulates appetite, which is useful if you're experiencing dietary side effects of depression and anxiety like overeating or loss of appetite. Be careful of taking 5htp if you're on pharmaceutical antidepressants, however, due to a possibly increased risk of serotonin syndrome— not enough research has been done on the interaction of 5htp with SSRIs and though no connection has ever been seen in humans, the chemical interactions are such that scientists suggest you be wary.

Kava ( Piper methysticum, technically a pepper) has been used traditionally in Pacific cultures— places like Polynesia and Hawaii— to relax without the use of alcohol or medical depressants. Countless strains exist, each with its own unique qualities owing to the active ingredient, known as kavalactones. While kava is often used for ritual purposes in its countries of origin, it has been adopted by the west for its ability to treat anxiety and panic attacks. Historically, the root is chewed or brewed into an emulsion with several other ingredients. If this method isn't available to you, kava is easiest to consume in tea form, though tinctures (taken in water) are also good. The effects can be calming— excellent for taking the edge off if you're feeling anxious and sad or stressed— but they can also be sedative, so it's not suggested to take kava before a long drive or huge meeting.

Of note: Kava has come under fire for apparent issues involving liver toxicity. It's relatively rare, but if you have preexisting liver issues, you may want to try…

Holy basil, or tulsi ( Ocimum tenuiflorum), is gaining popularity as an antidepressant alternative to kava for people concerned about liver damage. Sacred in Hinduism, tulsi plays an essential role in the worship of a variety of gods. It's also a key in ayurvedic medicine given its stress-reducing properties. Like kava, it's commonly available in the west as a tincture, but is also found in tea and supplement forms. Unlike kava, holy basil is adaptogenic— it works long-term to help your body respond to stress, rather than providing the immediate soothing and sedative hit that kava provides.

Everyone has had a cup of chamomile tea at some point in their life. It's mild, pleasant flavor and sedative effect make it the cornerstone of the 'Sleepytime Tea' your grandmother gave you as a child. It will work to calm you during a period of heightened anxiety, but prolonged application- a cup or two a day- can work as an adaptogenic to lower your overall stress levels. Some claim chamomile has anti-inflammatory properties, and with medical science positing that bodily inflammation could actually be a key cause of depression and other mental illness, it might be worth adding a daily cup of chamomile tea to a low-inflammation diet. Another way chamomile tea can positively affect your mental health is as a replacement for coffee or other caffeinated drinks— caffeine-free herbal tea can sate a craving for hot drinks without the caffeine that can trigger anxiety attacks, sour moods, and sleep issues.

This is the only supplement on this list that I've never tried personally, but enough people have told me about it that I feel it's good to mention. SAM-e, or S-Adenosyl methionine, is naturally occurring in healthy people and can be supplemented if lacking. Taken in tablet form, it's recommended for similar use to a daily antidepressant (or alongside an SSRI as a supplementary therapy). There are preliminary studies showing it can also benefit Alzheimer's patients— it's few side effects, unlike most prescription drugs, make it easily tolerated. The National Institute of Mental Health performed a study showing that SAM-e, used in conjunction with prescription antidepressants, was effective in treating pharmaceutical-resistant depression. And unlike kava and some other herbs, it's actually been proven beneficial with regard to liver function.

This was the first anti-depressant herb to break the mainstream conversation about drug therapy for depression. It may, in fact, be the most common herb used in the treatment of mental illness. Taken in pill form or as a tea, St. John's Wort works as a long-term mood stabilizer— in fact, some 2008 and 2015 medical trials believe it to be "as effective as standard antidepressant pharmaceuticals for treating depression" [1] and though that hasn't been fully proven, it's good enough for the millions of people worldwide who find it alleviates their depression without the side effects inherent to pharmaceuticals.

It is very, VERY important to note, however, that St. John's Wort can make birth control pills (and possibly other prescriptions, including some heart medicines) ineffective. If you are on the pill and want to take St. John's Wort, you'll need to use backup protection like condoms if you're having the kind of sex that can result in pregnancy!

If you don't like taking pills, these herbs can be smoked, alone or in combination with one another, to bring about a relaxed, sedative state. Mugwort especially is interesting to take in pre-sleep, as it often causes vivid, memorable dreams. Smoking cigarettes— both the act of smoking and taking in nicotine, and the tumult that happens when you finally decide to quit— is anxiety inducing, and withdrawal can lead to increased anxiety and depression. These herbs can serve as a distraction and replacement, giving you some of the relaxation without the added stimulus of nicotine.

Lavender is a bonafide all-purpose anxiety reducer. As an essential oil, it can be decanted with water into a spray bottle (to spray around the room, or onto bedsheets and pillows before sleep), used in a diffuser, or added into a warm bath (possibly in combination with epsom salts). As a dried flower, it can be taken as tea, sewn into pouches to keep in a pillowcase, or smoked in combination with the aforementioned smoking herbs. It's possibly the best-known herb in aromatherapy, as many find its fragrance incredibly soothing. Its oil can be tapped onto pulse points (the inside of the wrists and elbows, as well as the temples) to decrease stress and possibly even nausea while traveling.

Many people don't get enough magnesium in their diets, though it's a key component of nutrition and necessary for human development. Magnesium deficiencies can lead to crazy blood pressure swings, heart problems, and anxiety. The cool thing about magnesium is that, in addition to eating it, you can also absorb it transdermally— that is, through the skin. Ever wonder why epsom salt baths are so soothing? You're sucking up magnesium through your body's largest organ and it's calming you right the hell down, as well as working to alleviate the pain from sore muscles (good if you're also exercising to lower your anxiety and depression!). Recently, natural health companies have started to manufacture magnesium oil in spray form (magnesium needs to bond to a lipid in order to be absorbed, hence the use of oil as a propellant), which are great to keep in the fridge and spray onto your back or stomach when you feel anxious.

I wanted to make sure this nervous-system-stabilizing tincture got in here, because damn, it rules. My favorite is made by Herb-Pharm and no, this isn't even close to a sponsored post— but a lot of different supplement companies make their own variation of this product, though they will all contain different amounts of different herbs, so make sure to read the labels. Any Good Mood blend combines small amounts of a variety of the above-listed herbs as well as some we didn't cover, like Ashwaganda and Skullcap. I carry this stuff around like some people carry band-aids. Taken sublingually (that is, under the tongue— and yes, it burns like a bitch, but you get used to it), it provides an immediate hit of relaxation for moments when your blood pressure shoots through the roof. Taken daily in a glass of water, it provides general nervous system supplementation. It's pricey, especially considering that its ingredients can be bought in bulk and combined proportionally to suit your needs, but in a pinch, it definitely works.