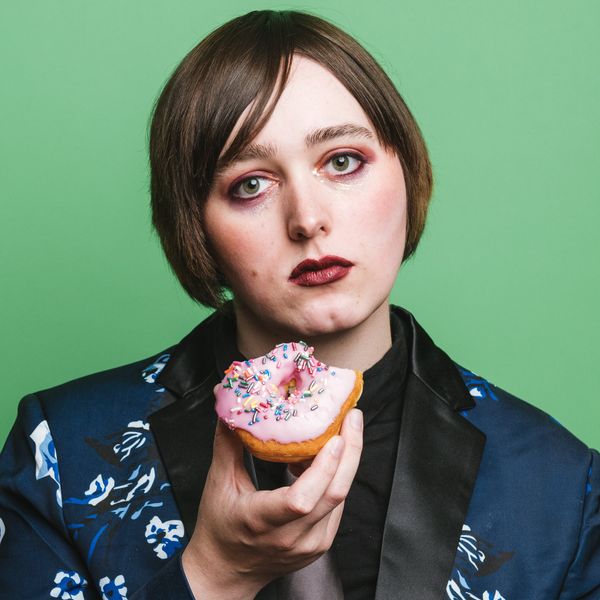 Back before TikTok was turning teenagers into social media stars and causing international controversy, there was once upon a time a little app called Vine. A gem of a social media platform with a life that was tragically cut way too short, Vine's legacy still lives on in the generation of creators it fostered. Odds are if you've stumbled upon a "best of" Vine compilation at any point in the past couple of years you're probably seen some of Nat Puff's instructional clips on "How to Make a Frank Ocean Song." But to pigeonhole her as just a Vine star would be selling Puff short.

A Seattle-based indie pop artist, poet and comedian, Puff's work under her stage name Left at London is quickly, if not already, eclipsing her early internet fame with hits like "Revolution Lover," "I DONT TRUST U ANYMORE," and writing credits on Alice Longyu Gao's "Dumb Bitch Juice." As a songwriter, Puff wears her heart on her sleeve, tackling topics ranging from mental health to relationships to navigating today's political climate as a queer person with a refreshing openness and honesty.

Off the highly anticipated second volume of Transgender Street Legend, Puff is now back with her latest cut off the EP, "Safety First." Thoroughly bedroom pop, with stylistic nods to mid-2000s indie rock like Beck and The Strokes seen through a more contemporary lo-fi lens, "Safety First" is ultimately a song about getting hurt. Lyrics like "I don't know if I can love again/ But the crowds want a love song" run counter to a refrain of "I would like to kiss someone and cry," relishing in the irrational set of contradictions that lost love puts us through. Puff is candid and emotionally raw with a bittersweet optimism that feels like seeing the sun poking out from behind the clouds after being thoroughly soaked in the rain.

Ahead of the PAPER premiere of "Safety First" off the upcoming EP Transgender Street Legend Volume 2, we caught up with Nat Puff to talk influences, comedy and the importance of prioritizing mental health.

How did "Safety First" originally come about?

"Safety First" was an interesting song to make because the beat for the first half came first, but I didn't know what I wanted the song to be about. Originally it was much faster, and it was basically the opening riff to "Japanese Candy" by Little Teeth with a mid-2000s fast alt-rock feel. (Like Franz Ferdinand or something like that.) Didn't like it, so I slowed it down and added a bunch of pitch and volume effects and the rest of the beat came from that. I posted it in a groupchat for members of the group FROMTHEHEART (which Vera and I are a part of) and Vera just made a verse for the intro. I really liked the idea of making the song about romantic love, but if it was any indication by my first single this year, "Blacknwhite," I hadn't been feeling all too optimistic about romance lately.

I wrote the chorus and believe I came up with the last two lines first, "I write for no one in particular/ I sing for someone I may never meet/ But I would like to smile again/ I would like to kiss somebody and cry." I like the first part of the chorus is because of the contradiction; I can't write for a particular person because I'm not in love with any particular person but the verses are very clearly about a particular person, they're just not positive things. The second half was very much a fluke because the "I don't have energy anymore" refrain was built as a different song about depressive tendencies. I didn't like how it was sounding, so I scrapped it, went back to "Safety First," and made some simplistic piano chords loosely based on the first half. Immediately I rewrote the "But I don't have energy anymore" refrain to be specifically about putting energy into relationships and self improvement instead of literal physical energy. I rewrote the last two lines last minute to change the atmosphere of a self-pitying tone to an accusatory one, which I figured was a perfect representation of the lack of growth and self-improvement I felt like I hadn't given myself enough of. It's a perfect song for and about imperfect people. Not to toot my own horn, but like. Y'know. 🎺🎺🎺!!!

What do you hope comes across for people listening to the song?

It's okay to be angry when you mourn as long as you also reflect on why specifically you're angry. You find a lot about yourself when you question your motives.

What were some of the influences you were working with for this track?

"You Get What You Give" by New Radicals was a huge influence in the tone I wanted. I basically took the same vintage drum break feeling from "MARCH" by BROCKHAMPTON and applied it to my song. You can only find that song publicly on YouTube and stuff, but it was off of the bonus disc in the Saturation box set. Genuinely my favorite song by them. The fact that it's essentially the emotional feeling of both combined was a huge influence in the emotions I had recording it. Not gonna lie, I don't think I've been that involved during recording since "Blacknwhite."

Are you optimistic about love in the time of corona?

Clearly I was not at the time of writing! BUT I have reasons to be optimistic now. It's hard to be patient, but life rewards you when you are. That's what I got to say about that.

How would you say your music's evolved since Transgender Street Legend Vol. 1?

Drastically. For one thing, I'm now strictly bedroom pop on this EP (except for "6 Feet" which was written, recorded and produced in Dylan [Brady's] studio in LA) TSLV1 was written and semi-produced in my bedroom except for the vocals for the first two songs which were recorded professionally in a studio. It took a while, but I finally set up my mic to sound good isolated and now I'm unSTOPPABLE !!!!!! But like genuinely, I feel like I've learned more about production in this pandemic than I ever have before in a concentrated span of time. I'm really proud of myself for that.

What was it like being a vine star, once upon a time?

It's funny cause honestly I only had like three or four viral vines that got a resurgence in popularity after Vine died because they were featured in a lot of vine comps. I have like, 10 times the followers on TikTok now than I ever did on Vine. That being said, it was my first real taste of internet virality being attached to my face. Looking back it was weird. I was telling somebody that I had just met about the experience and the year I started to blow up. They responded "So you've been internet famous for your entire adult life?" I did the math, realized I blew up around age 18, and then realized how none of my adult life has been away from a spotlight. Shit was surreal to realize so many years after.

What sort of lessons did you take away from that experience?

The most important thing I've learned from myself and others is that fame in any form will stifle your sense of self, traumatize you in small ways, and stunt your emotional growth. I advocate for anyone to go to therapy, but especially content creators because they're the type of motherfuckers to most likely refuse it despite having resources. People make assumptions that because somebody is popular on the internet that they're rich and happy. Like yeah, I'm living my dream job, but it's admittedly so different from how I imagined it. It can fuck with your ego in the sense that I've seen people go, "I have my dream job but I'm not happy... maybe I need to be better at my dream job." It starts diverting into this really capitalist mindset that you need to get more money doing what you love in order to be happy, which is not true. I've met people at all levels of success and the common thread is that they're thankful but hungry for more and let it eat away at them (including the particularly successful ones).

Therapy helps a lot, reminds me that I'm not disposable, that I'm a real person beyond my career. Makes the relationship with the fans stronger too because I have the ability to be happier and make better content. Even when I'm not happy, I feel more able to talk about it via music because of that. That's why it's important to focus on yourself and your community more than your career; art (whether its comedy, music, or whatever) is based on life experience. If your entire life experience is chasing fame, your art is gonna make you out of touch with what the modern everyman wants, because it lacks sincerity. A lot of people will hear that type of opinion and assume, "Oh so you're talking about rap?" which, first of all, no, because I'm talking about all forms of art, not just music, and not just rap. Second of all, while rap definitely has its share of out of touch people, the narrative is usually either a "rags to riches" story, or a cautionary tale about being unsatisfied after blowing up and processing why. Sure, they're balling, but they're bawling too, y'know? It's not a rap song but "Super Rich Kids" (by Frank Ocean) was a great song because it presented itself as a character study on the exact type of stifling of one's emotional growth that fame can do, rather than a "I'm so rich, pity me" type view. It's perfectly possible to make art about that phenomenon, you just have to know why you're making it.

What informs your sense of humor? Your musical taste?

It's like asking a chef what the right spice to put in every dish is; not only are most spices going to improve a meal (especially when combined), but different meals require different spices. Like it's possible to put oregano in a pb&j, but you better know what you're fucking doing. But I honestly just make whatever I'm in the mood for. Instead of seeking out a sound from another person for example, I make the song I want to hear. That's kind of why my taste in music that I listen to is somewhat unorthodox for someone who's writing style is very indie and pop, I know I can't make that type of music at the level I'm currently at. Like I could try and make a Death Grips song for example, but it's gonna sound insincere & tasteless. I'd rather just listen to the real thing. Humor's the same. I make jokes I think are funny. Sometimes it's parody, sometimes it's wordplay, sometimes it's surrealistic. But I honestly barely calculate what I'm going to say.