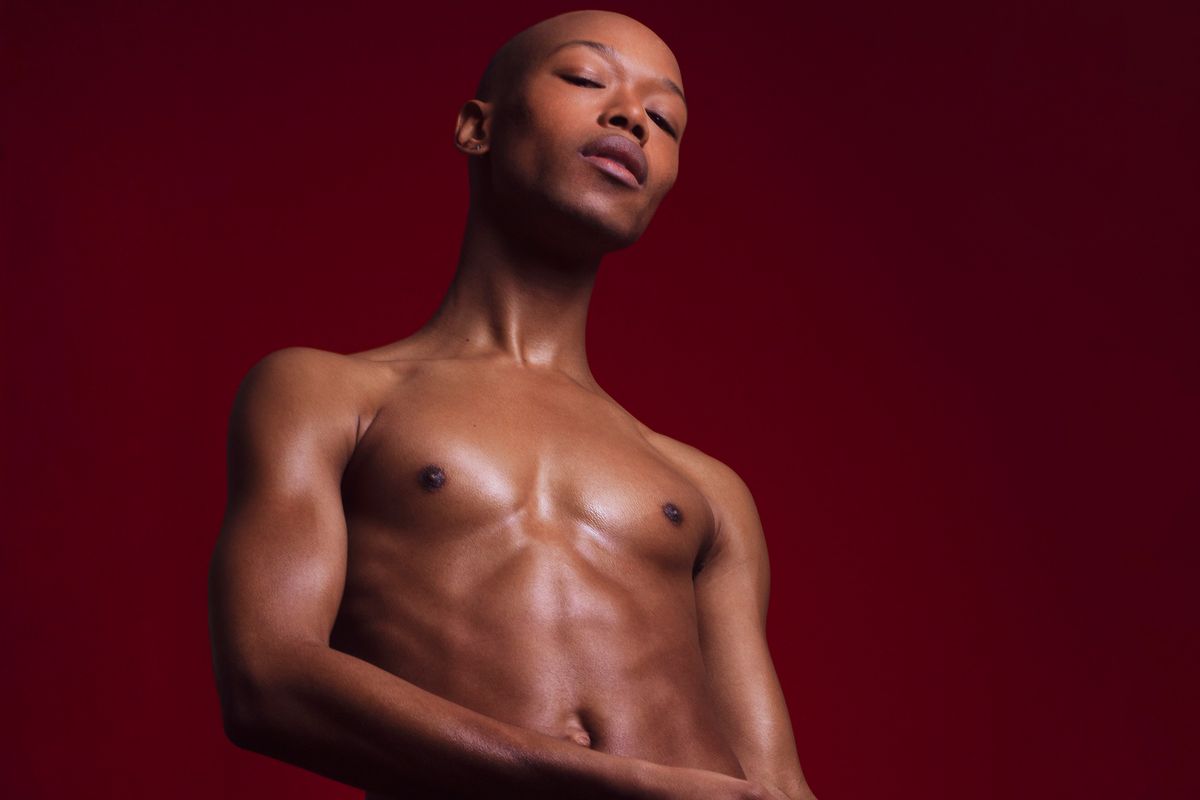 South African singer-songwriter Nakhane's name is fairly new in America, but he's quickly proving himself one of music's most gifted and singular young creators. His ineffable art-pop is devastatingly sad, romantic, theatrical, and often autobiographical: reaching deep into his past, growing up gay in a devout religious community on the eastern cape of South Africa. With his singular vision, it's unsurprising that peer iconoclasts like Mykki Blanco, Perfume Genius and Madonna have all expressed support leading up to the February US release of his debut album, You Will Not Die.

Today, Nakhane shares a new single off his upcoming debut, titled "New Brighton," which features trans avant-garde singer-songwriter ANOHNI (who formerly released as Antony and the Johnsons). The pair are mutual fans, but first connected online, after ANOHNI wrote on Facebook:

It's difficult to find more concise words for Nakhane. Full of angelic synths and burbling guitars, reminiscent of Dirty Projectors' eccentricity, "New Brighton" builds from gentle waters, into a joyous tidal wave powered with gospel choir-like energy, though it's just ANOHNI singing back-up behind Nakhane's ringing soprano. He uses both exacting detail and grandiose metaphor, to tell a story of electrifying hope about confronting the past and moving beyond it. The song is illustrated by a gorgeous video, directed by Iggy LDN (director of of the film Black Boys Don't Cry), in which Nakhane awakens on the beach and wanders around a lavish house full of religious imagery, that he seems to both be discovering and returning to.

"The video is about being completely alone in a foreign place and trying to figure out your identity to get to closer to home, wherever that may be. It was really interesting because I wanted the video to be close to Nakhane's own upbringing as well his identity; we used references synonymous with his childhood and explored religious and non-religious symbols to reflect his viewpoints. I think this is what makes the video so important." LDN explains.

The song crests with its anthemic chorus, on which Nakhane promises that he'll: "never live in fear again, no never again." It's a line that knocks the wind out of you, knowing the unique fears that Nakhane has faced. Though his music is rooted in exceptional experiences, as ANOHNI puts it, Nakhane's "courage, generosity and open-heartedness" is a gift to anyone willing to listen.

PAPER spoke with Nakhane about the story of "New Brighton," collaborating with ANOHNI, and being called a pop artist.

The song is latched to these vivid geographies. Why is the song centered around these places?

"New Brighton" was actually the first song I wrote for what would eventually become You Will Not Die. I didn't realize it at the time, but listening to it now I hear that it really has everything that I wanted the album to be about: home, love, Christianity (and my rejection of it).

On the 31st of December in 2013 I was in Port Elizabeth for the December holidays in New Brighton, a township in Port Elizabeth on the East coast of South Africa. For the first time ever I decided to look at my city from the eyes of a tourist. I couldn't ignore the many colonial names and monuments that were triggers and oppressive reminders everywhere one went. Even the township New Brighton is named after Brighton in England. I was alone that New Year's Eve so I went to the nearest tavern to get a couple of beers, and settled down to write the song. It's a paean to the place and the people, but it's also a mourning for so much that we lost and are still losing because of colonialism.

In the video, what is this lavish, grand house that you seem to be both discovering and returning to?

I've always been of the opinion that if you are truly over something, you should be able to return to it, look at it in the face, and see that it no longer has power over you. One way of looking at it would be to see it as a reference to the mansions that Jesus spoke about in the book of John. "In my father's house, there are many mansions," he says. Okay. Let's create one in this world, in this little film, and look at it straight in the eye... and then leave it behind. There's nothing for me there.

The line "never live in fear again, no never again" feels like it could be an artist's statement for you. What does it mean to you, in the context of this song and your work?

When I wrote it, I wondered if it was too throwaway. Is it too expected of an artist like me to have a line like that in a song? But I realized that sometimes, one has to put mystery aside and be as clear as possible. To be reminded not to live in fear is a good thing. The world is dark and sometimes we forget.

Tell us about working with ANOHNI on this song, and your relationship to her as a collaborator.

ANOHNI changed my life. I was working in a music store in South Africa at the time when I discovered her work. She rolled up the heavens like a scroll: That's how I describe it to people when I tell them about ANOHNI's work. As much as I loathe monuments; her work is monumental. So when I asked her to sing on the song, I thought I was really being cheeky. How could such an icon even say yes to me. I still shake thinking about when I first heard the mix of her vocals in the song. She means every word she sings. What more could we want from an artist?

You're often referred to as a pop artist, though this song, like much of your music, straddles many styles. Do you think of yourself as belonging to any particular genre?

In my early 20's when I was playing in post-punk bands and recording the most lo-fi music possible. I would have spat in the direction of anyone who called my music pop. Now I celebrate it. We should not forget the etymology of the word: popular. It's popular music. And within popular music, there are many branches. I like to think of myself as a figure who has spread themselves over many different branches.