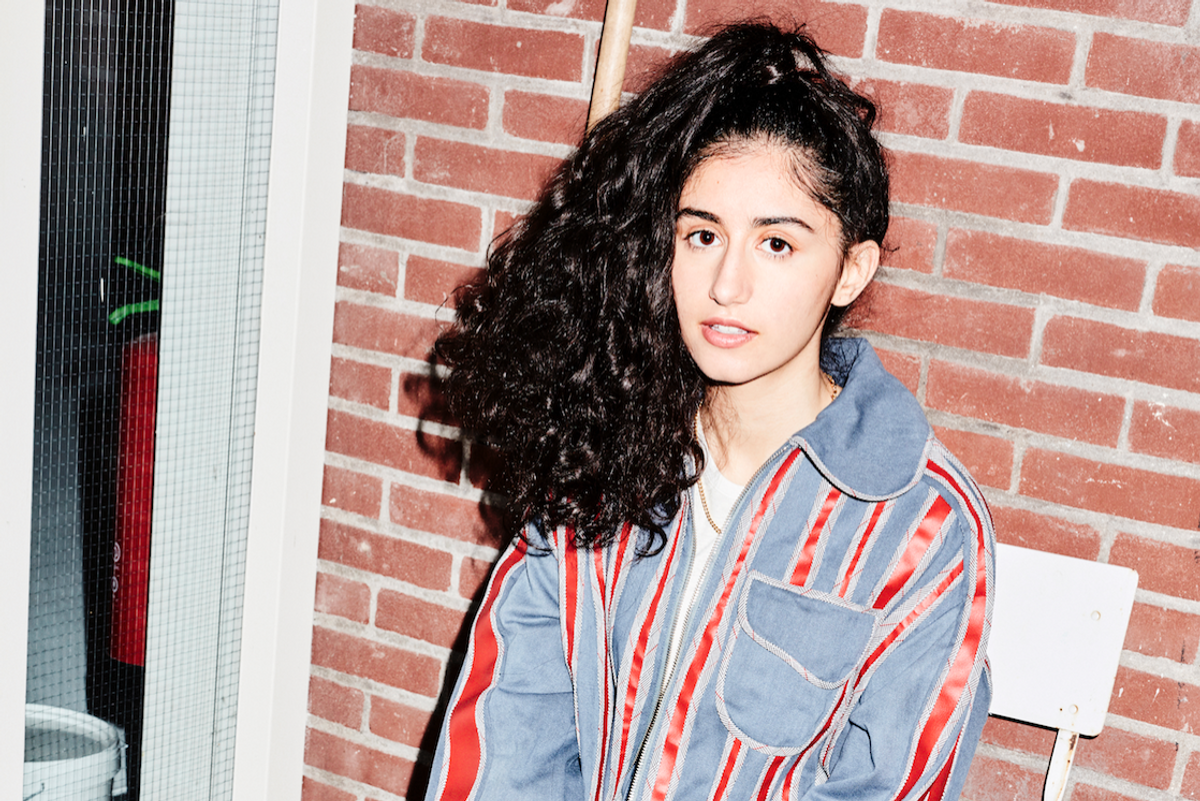 Naaz Is Bringing Her Bedroom Pop to the World

Nineteen-year-old Kurdish-Dutch singer-songwriter Naaz has a gossamer, winding voice that whispers across soaring pop instrumentals. She had to work hard to convince her family to support her music, though, as they weren't initially enthusiastic about her working in an industry they thought of as overly sexualized and materialistic. But, with the encouragement of her brothers, Naaz began writing and producing her own songs in her bedroom and uploading them onto the Internet. She just released her debut EP, Bits of Naaz, and her songs and videos have already racked up thousands of views.

It's no wonder, then, had her fearless spirit works its way into her music. Her song "As Fun," is a bubbly ode to indulging in love, even if it ultimately ends in heartbreak. Naaz's voice is delicate and syncopated as she sings,"Break my heart, I need it/ If it's what it takes to feel alive." The accompanying visuals for the song show Naaz's friends Rozepaars and Ray Fuego depict the stages of young romance amid bubbles, cherry blossoms, and roses, all of which serve as reminders that the most beautiful things are often subject to wilting, dying, or popping but are nonetheless worth celebrating.

PAPER caught up with Naaz to talk about her new video, making music from her bedroom, and how the Internet helped launch her career.

You've said that you were discouraged from making music when you were younger. Why is that? How does your family feel about your music now?

As a Middle Eastern girl it's not the expected thing to do music, I think mostly because of the industry's reputation of it revolving mostly around sex, drugs, alcohol and superficiality. These are all very sensitive subjects in my culture. Also, as the Kurds have never really had an "official" home on the map, besides obviously having so in heart, it brings along a certain survival instinct that I feel almost every fellow Kurd I've ever met has. You really have to earn your place. I feel that because of that, having status and a good stable job is extra important in our culture. Without that you aren't perceived as much, sadly. Things are different though nowadays, and also living in Europe. I suppose my parents were just really afraid, and still adapting to this completely different world they entered. I don't agree with everything, but I do understand. I can't expect them to experience a complete different culture and world and immediately adapt. The music industry is a tough world, I also find it very hard sometimes. I get how they'd rather not have me in it, but I am insanely grateful that step by step, over the years they widened their horizons. I would've never believed this would be my reality a few years ago, but my parents truly support my dreams now. It's very brave to still be open to new things after all the things my parents have gone through in their lives.

Your brothers encouraged you to put your music on the Internet. How has the Internet served as a virtual community for your art? Do you feel like you were making music for the Internet?

I love the Internet for this. I used to think I didn't have the typical "looks" to be taken seriously as a performing artist but then the Internet streaming generation came along and suddenly girls didn't have to look like supermodels anymore for their music to be heard. If you listen to music on a streaming service, you often just put your phone in your pocket and listen. The music can actually speak for itself. The Internet changed the music industry, you don't have to fit in a certain box anymore to be given a chance. You can actually create your own chances — be less dependent. When I didn't have the opportunity yet to really get my music out of my bedroom, I just started putting it on the Internet I tried to send my music to almost every music industry-related email address I could find, and would get rejections all day, but it was okay because critique genuinely helped me grow. Little by little, I started growing my own online audience. And slowly but surely it helped me get out of my bedroom and into the real world — performing my music in front of an audience, which was always my main goal.

Until recently, your music was made in your bedroom. How has that DIY approach influenced your sound and aesthetic?

I think it just makes you find beauty and sound in little things, and gives you a lot of space to think about things to a point where you keep finding new layers in everything you discover. Suddenly music in my mind wasn't just music anymore, but a bundle of lots and lots of random little sounds put together. It made me realize how I could turn literally everything into music —little taps against my teacup, or birds outside of my room, even chopsticks hitting each other, it could all be part of a song. Cause it's part of my world. As I can't play musical instruments perfectly, it's nice not to be limited to musical instruments only, I make the best out of what I have. It forced me to become more creative. There's bits in everything to use. I think the DIY approach makes you more grateful. Everything feels like a win — an extra something getting you closer to creating what's in your head into real life.

How is production different from writing and singing songs?

It feels like writing and singing have become more of a second nature type of thing to me over the years. My mind is always kind of spinning and often I feel too worked up about something to actually write it down. My brain goes faster than my hands could actually write. Sometimes I just want to let it be instead, and see the beauty of simply just experiencing things rather than focusing on capturing them. Most times I do really regret that afterwards as I forget the potential lyrics I had trapped in those thoughts. Producing music is less natural to me, but every time I make a song I'm really into, I hardly remember how I exactly made it. Like I was in some kind of trance of chaos while making it, I don't really do and make anything with too much thought behind it. Sometimes that makes me feel worried that I can't do it again, but at the same time it feels really special. I literally captured myself in the moment — my music is like a recording of my brain in the heat of the moment.

What have you learned about production as you've done it more?

Less is more! Often I make a comparison between cooking and making music. It's both about creating something out of bits and pieces. For instance, if I discover a new herb I really like, I use a lot of it, but then the food doesn't taste as good anymore because the balance is off — same thing with music. I remember when I finally got decent speakers (as I made half of this EP on 10-year-old PC speakers) I could finally hear the bass and started overloading my songs with 808s and low frequencies, totally overdoing it out of excitement, My mentor/A&R had to tell me to tone it down a little. I think it's the most important rule: "Less is more."

How do you hope your music makes listeners feel, especially "As Fun"?

I hope it makes them feel confused, and confusingly okay with feeling like that. Being confused makes you ask questions to yourself that can be a good bridge to finally confront yourself on certain things that might be going on. It also shows how not every question has an answer in reach, and that it's okay not to know everything. I hope my music can make you feel a lot of feelings, to a point where you're not sure anymore whether you're happy or sad, almost like it's a rollercoaster. "As Fun" starts with very little harmony, so you are not sure yet what the mood will be. When the vocals come in, you sense it's a happy song, but the second the hook starts it's like a sea of all kinds of emotions. The whole song feels like a trip to me. I laugh, I cry, I dance.

What were the visual influences for the music video?

We came across some visuals by the director of this video, Yavez S.E. Anthonio. It triggered nostalgia in me because of his use of raw footage. I loved it and approached him if he'd like to collab. We wanted to capture the stages of love in a video, but also leave it open for interpretation. It's not set in stone how the video may make you feel and what emotions it will trigger. I feel like the visual influence is mostly inspired by the rollercoaster of emotions in the music.

Making this video felt like doing a fun school project with a group of cool kids you don't really know but do really like, just walking around a city that's not yours but feels like home, and taping young love on camera. There wasn't a whole crew, no crazy gear or instruments, just some really great people trying to make something beautiful. The main girl in the video, Rozepaars, is an old high school friend of mine. She and I always had real big dreams. Nobody really took them seriously and we were definitely the odd ones out. She wanted to become a fashion designer and actress, and I a musician, so the minute I finally got an opportunity to shoot a music video, I asked her to be in it. She also starred in the "Words" video. She used to shoot my photos and make clothes for me with her mum back when we were 15, and I started putting my music on the Internet. It feels mad that we get to do things like this now. Her just being her, and Ray Fuego just being him were the main visual influences.