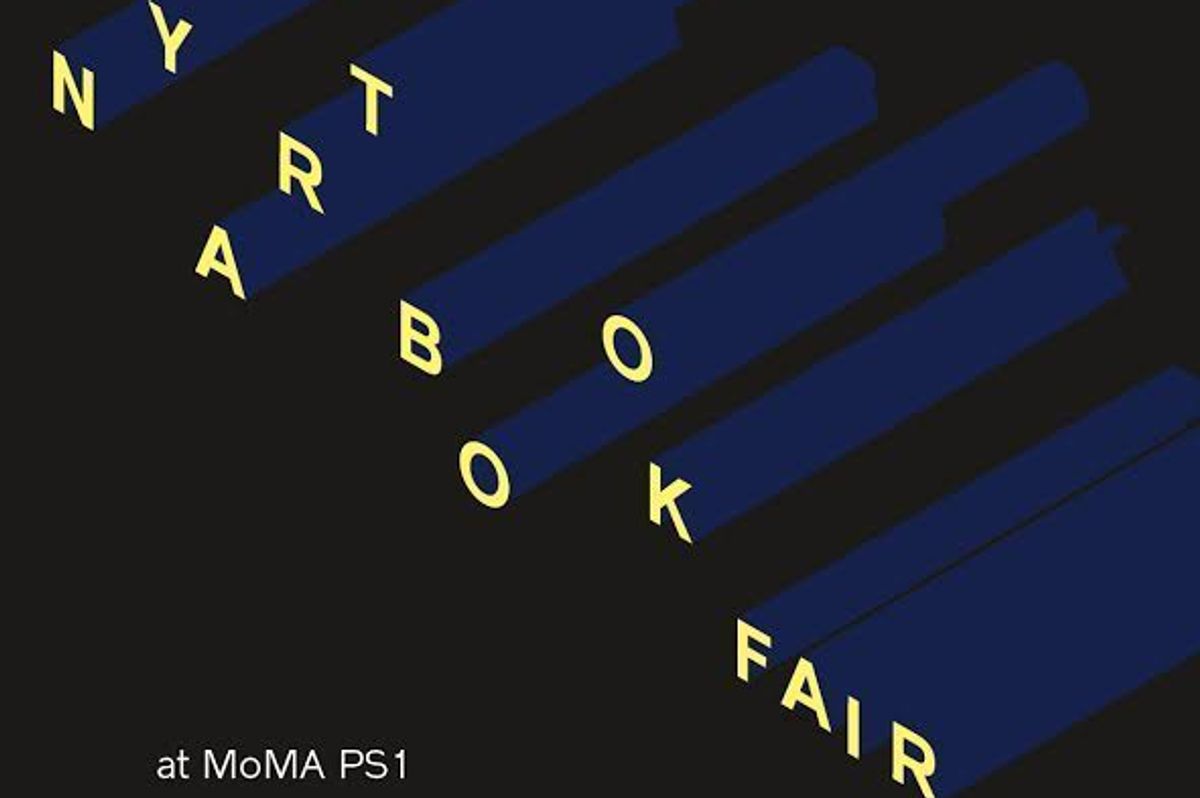 Another big week for art openings and events here in NYC, including Printed Matter's NY Art Book Fair at MoMA PS1 in Long Island City. Tickets to their preview on Thursday, September 15, 6 to 9 p.m., are $10 and include a live show by Beat Detectives. Then it's free and open to the public on Friday, Saturday and Sunday. Over 370 exhibitors from 28 countries are expected for this eleventh edition of the fair and there will be big crowds all weekend -- last year drew 35,000 people. Don't miss it!

The inaugural edition of the Independent Art Book Fair is happening nearby in the Greenpoint Terminal Warehouse (67 West Street, Brooklyn) from September 16 to 18, 11 a.m. to 7 p.m. daily with free admission. The preview -- co-hosted by Tiny Atlas Quarterly -- is on the 15th from 6 to 8 p.m. This fair is the brainchild of Karen Schaupeter, curator and founder of Ed. Varie gallery. Over 70 exhibitors are expected. Perfectwave organized the music program.

The Park Avenue Armory (643 Park Avenue) has another monumental installation opening this week called "An Occupation of Loss" by Taryn Simon that includes performances by 30 global "mourners" in an installation of eleven monolithic structures designed in collaboration with Shohei Shigematsu/OMA. There are several evening performances daily through September 25 with tickets starting at $45. Go HERE for more info.

Jeffrey Deitch is back at 18 Wooster Street with a Walter Robinson retrospective that was originally put together by Barry Blinderman for Illinois State University and opening here in NYC on Saturday, September 17, 6 to 8 p.m., and running until October 22. As Deitch notes: "Robinson painted nurse paintings before Richard Prince and spin paintings before Damien Hirst. He has long been at the center of the art community."

The Jewish Museum's (5th Avenue at 92nd Street) "Take Me (I'm Yours)" exhibition may be the best opportunity you'll ever have to collect art for free. Opening on September 16, the show features works by 40 artists -- Yoko Ono, Gilbert & George, Carsten Holler, Jonas Mekas etc. -- and you can "participate with" or "take home" works with the bag provided at the entrance. Some of the works are edible and, as the Gallery Guide says, they are kosher, but "may contain peanuts, tree nuts, soy, milk, eggs or wheat." On view until February 5.

Galerie Perrotin (909 Madison Avenue) has the first NYC solo show by Daniel Arsham opening onSeptember 15 and on view until October 22. "Circa 2345" will feature several sculptural works including cultural artifacts (guitar, film projector etc.) rendered in ash or rock dust, as if recently recovered from an archaeological dig.

Paul Kasmin Gallery (297 Tenth Avenue) has a Roxy Paine show called "Thermoplastic Flux" -- his first show focusing on works on paper, rather than sculpture -- opening on Thursday, September 15, 6 to 8 p.m. and up until October 29.

Fridman Gallery (287 Spring Street) presents a series of nine concerts called "9e + 50" celebrating the 50th anniversary of a music, dance and theater performance series held in NYC in October 1966. The original event featured artists including John Cage, Robert Whitman, Yvonne Rainer and others who produced collab works with engineers from Bell Labs. The new series, produced by Julie Martin and the gallery, begins on September 16 with music by David Tudor performed by John Driscoll and Phil Edelstein. The last show is Saturday, September 24. There is also a screening of films of the original event at ISSUE Project Room on September 25, followed by several concerts in their 22 Boerum Place theater through September 30; and a symposium on art and technology at NYU Tandon School in Brooklyn onOctober 1.

SculptureCenter (44-19 Purves Street, LIC) opens two solo exhibitions on Sunday, September 18, 5 to 7 p.m.: Cosima von Bonin's first solo museum show in NYC, "Who's Exploiting Who in the Deep Sea?" and Aki Sasamoto's "Delicate Cycle." Both are up until January 2, 2017. The Center's annual benefit gala is November 2 at the Rainbow Room.

Marlborough Gallery (40 West 57th Street) has an exhibition of new works by Paula Crown called "Freezing Rain", including an 8 by 12-foot installation designed to "mimic a sheet of rain" and a series of wall reliefs rendered in chain mesh fabric. On view now to October 8.

Also be sure to check out:

David Shrigley's 17-foot-tall "grocery list" sculpture made of granite, near the southeast corner of Central Park at Fifth Avenue and 60th Street.

"Sean Scully: The Eighties," on view now through October 22 at Mnuchin Gallery (45 East 78th Street). Scully moved from the UK to NYC in 1975 and worked out of a studio at 110 Duane Street in Tribeca. This is the first US solo show dedicated to this decade of his work.

The current show at Pioneer Works (159 Pioneer Street, Brooklyn) that looks at the legacy of the late-60s/early-70s San Francisco art collective known as Ant Farm, and its contemporary successor, LST. Up until October 23.