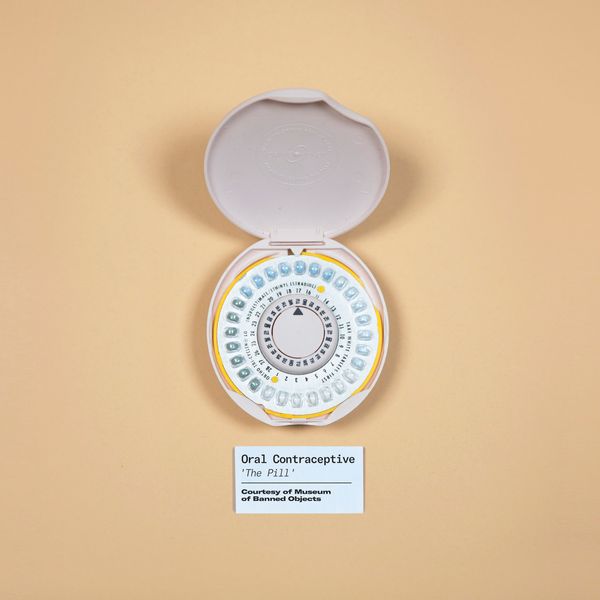 Museum of Banned Objects Imagines a World Without Sexual Freedom

New York City-based artists Ellie Sachs and Matt Starr have teamed up to curate a show called Museum of Banned Objects. As the name implies, the show features a collection of items (including condoms, Plan B, and birth control) from a hypothetical dystopian future in which reproductive health tools are banned. They say the installation "asks viewers to consider the very nature of resistance, equality, and hegemony," and to remember that in such a turbulent political climate, marginalized groups have to fight for their bodily autonomy.

Museum of Banned Objects is a collaboration with Planned Parenthood, and is on display from April 3-30 at The Gallery at The Ace Hotel in New York City.

We caught up with Sachs and Starr, who have spent the last year collaborating on another project called My Annie Hall, to ask them about making art in a post-Trump era, re-contextualizing old or forgotten sexual health objects, and how they get conservative men to pay attention. Check out the objects in the exhibit, and read our conversation, below:

Does the project feel like a reaction to Trump's presidency?

ES: We're living in a bizarre, disturbing, and frightening time. I think this project plays with those themes. We created a reality that is surreal and disorienting — but rooted in truth.

A lot of what's happening with this administration feels eerily dystopian. The media we've both been consuming lately has also been erring toward dystopia and science fiction — [we've been] watching a lot of weird Twilight Zone episodes and David Cronenberg movies. All of these things had been swirling around in my brain and something definitely ignited when the "Banned Words List" at the Center for Disease Control came out. (Even though that story was largely redacted -- the fact that staffers have to censor themselves on budgets to appease Republicans and avoid words like "diversity" or "fetus" is pretty telling.)

MS: Exactly. What we've been watching on TV and seeing in movies recently were starting to converge with what we were seeing in real life and on the news.

ES: Beyond my media consumption — I've been struck by our president's lack of empathy. Couple that with the aggressive budget cuts to programs like Medicaid and Title X — this project grew from a very real place, but it all feels surreal — so I guess it's kind of fitting.

You've worked together before (on My Annie Hall.) What is your working partnership like? Why did you decide to collaborate on this project?

MS: Ellie understands the big picture. She also understands narrative really well and how to work with the larger community and tell bigger stories. I get lost in ideas and images and she's able to mold them into something that actually makes sense.

ES: My background is in developing and directing new plays. I bring an ability to tell stories with a beginning, middle and end. I love building out a world and finding all the details in the narrative. Matt is amazing to work with because he often thinks poetically. I think what we create together has a richness that I had been looking for when I was working in theater. In terms of this project, we had been spending so much time together finishing our film and of course news was a constant topic. This project came as a direct result of conversations we had together.

How did you decide which objects to feature in the installation?

ES: We wanted to choose items that people had a connection to — that were actually a part of their lives. We made sure to appeal to different demographics (i.e. an item like the sponge might not be as popular now, but people who were having sex in the 80's/90's or who even watched Seinfeld might have more of an emotional response to it being banned.) Matt and I are really interested in exploring re-contextualization. By placing these objects in cases, they suddenly become more precious and important — by suggesting they're banned, it creates an emotional response. It immediately heightens the person's relationship to the object.

MS: As opposed to it being taken for granted in an aisle of a CVS or Duane Reade.

What do you think the relationship between art and policy is (specifically with this project)? How do you see your installation influencing politics?

ES: If anything, my hope is we get people to see and think about reproductive health products and reproductive rights in a new way — it shouldn't be controversial. A lot of the people making the cuts to the programs that directly fund reproductive healthcare are conservative, older men. I often think about images like this. Choosing the condom as one of our banned objects was not a coincidence. Sometimes, to get people to care about things or empathize, you have to appeal to their senses and what they already care about. Meaning, of all the items on display, I'm willing to wager the condom is the item they're most intimately familiar with. What would be really great and fruitful in terms of the trajectory for this project would be bringing it to more conservative states.

MS: Politics and especially policy aren't user friendly and definitely weren't designed for the average citizen. People are constantly voting against their best interests because half the time we don't know how things up top affect the things down below. Part of the nature of art is to help us understand the world a little bit more. We can't fully rely on words to explain everything. We're taking abstract ideas that are written about and talked about a lot and using them to create a (potentially) not so distant reality from what we're living in now.

The plan from the beginning was to have this exhibition travel to other spaces, add to it and build out the world more. This is a concept that we'd be interested in replicating in a number of different ways -- talking about the present through the lens of the future is a helpful way to see things with a fresh perspective.

What feelings do you hope the project evokes in people who see it?

ES: I hope people feel a sense of urgency. We collaborated with Planned Parenthood for a reason — I hope people get inspired and find new ways of being more engaged.

MS: We want people to take out their phones, open up the camera, take a picture, upload it to social media with the caption "PLEASE DON'T LET MUSEUM OF BANNED OBJECTS BE A REAL THING #istandwithplannedparenthood"

We're creating a reality in order to avoid another reality.

Do you think it is feasible that some of these objects could actually be banned in the future? It kind of feels like with the level of disdain Trump has for women and femmes, nothing is off the table.

ES: Anything's possible. Even though that Ohio bill is insanely unconstitutional, it was still on the table. People in our government thought that was a good idea. It's chilling to me. I don't have the right words for it.