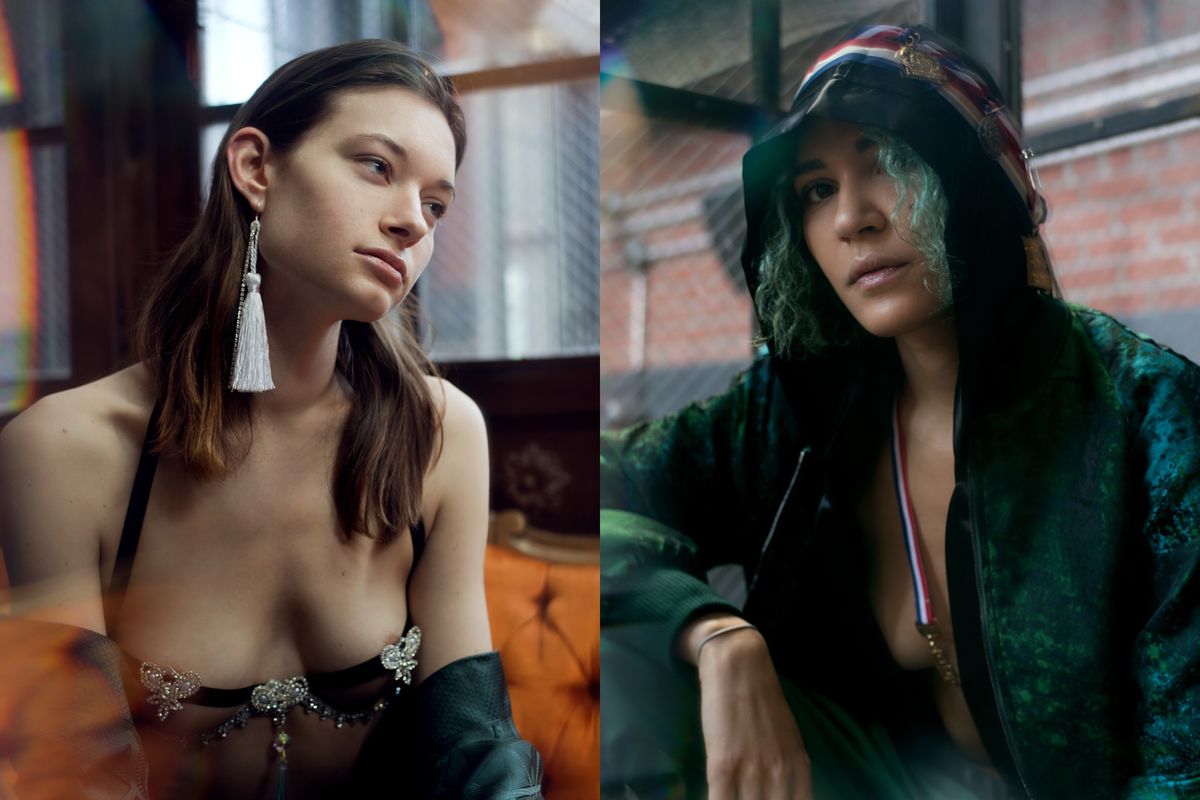 Few things could bring us to Long Island City — except for Lindsay Jones of NYC brand Músed. The brainchild of Jones, whom plays many different roles (activist, artist, sculptor, mother, and designer), Músed seeks to bridge the gap between luxury fashion and a sustainable lifestyle, both ecologically and metaphysically. With today's administration showing complete disregard for Earth's well-being, women, the LGBTQIAA community, and people of color, Músed's newest collection Team Planet Earth directly responds to the current political climate.

Being a designer transcends creating clothing — it's the execution of an entire movement and business. That's why when Jones invited us to meet her at the industrial-chic Paperfactory Hotel in LIC for a preview of the collection, we immediately anticipated something special. Wearing a relaxed shawl and black pants, Jones radiated a sense of calm as she guided us into a separate room where one of her staff members was working on some beautiful bras and accessories for the show. She tells us she's been up since dawn, dealing tirelessly with expected NYFW drama.

"I woke up at 6 AM, [and] I had a meeting at 10 AM. Then I had emails saying that like, Oh, there's no insurance for the venue, and if we don't get the insurance to the woman in charge right away, then we don't have a venue even though it's already paid for," Jones says, the whole time lounging comfortably. "That's what that feels like two days before a show, and I don't like myself right now. I've been wearing sweats for three days."

The collection itself is a beautiful merging of Earth, love, activism, sustainable materials, luxury, and, most importantly, applicable philosophy. "Team Planet Earth is about Gaia, Earth, and Medea — matriarchy meets planet earth," Jones says, quickly becoming an impassioned activist. "But it's really about healing the abuses of the earth, and the people on it. In a way I feel like that's a little anti-administration and what it's doing." When asked if she's referring to President Trump's controversial decision to leave the Paris Agreement, a climate agreement within the United Nations Framework Convention, Jones confirmed yes.

Immediately, it's made evident that Jones (and Músed) isn't just being sustainable to "greenwash" her company — it's from the heart. When asked about how she felt about sustainable fabric sourcing, design, and materials, Jones did not disappoint either.

"We are using vintage pieces that we're re-working in the show," she says, "and using some recycling symbolism. It just feels right. I still use this local seamstress who I love working with. But I'm also getting a lot of pressure to start producing overseas, and issues like price points on the business aspect [become] a real challenge for designers like us." Here, Jones' tone gets serious. For many brands, whether big or small, producing fashion in an eco-friendly way can be a challenge, when investors are often only interested in profit generation, and growing customer consumption.

When referring to fur, Jones taught us about something new: road kill fur. "I started researching sustainable fabrics, even with fur," she says. "I did find something. There is a road kill type fur [that's] sustainable; if you Google, the fabrics exist. So it was good to get a grasp of what the fabrics are." Tom Ford this NYFW too, chose not to use real fur, showcasing luxury's fashion recognition of a long-standing controversy.

"Fashions hard! Because the dyes are toxic, [and] fake fur is plastic burning into the air," Jones says. "There's a lot of ways to look at [sustainability]. I think fast fashion is definitely part of the conversation, [because] there's so much pollution on waste coming out of fast fashion. So that's something I would want people to question."

Designers like Jones are making sustainable fashion more desirable, and not just a marketing ploy. When asked about what inspired her activism, Jones says, "My family's a mixed race family. I have a step-sister/adopted sister who's half-Asian, [and] her kids are half-Black. We grew up in Utah, which is very white. This is very personal, but I have a trans child. My immediate family is very diverse, and so the ways [this new administration] was bothering me were very personal — just like how I feel everyone's rights are important is also very personal."

With the political climate bursting at the edges regarding climate change, the #metoo movement, Black Lives Matter, trans-issues at hand, it makes sense that Team Planet Earth launches in 2018. While primarily focusing on Earth, Jones' vision is an ultimate gathering of different communities to love and celebrate one another.