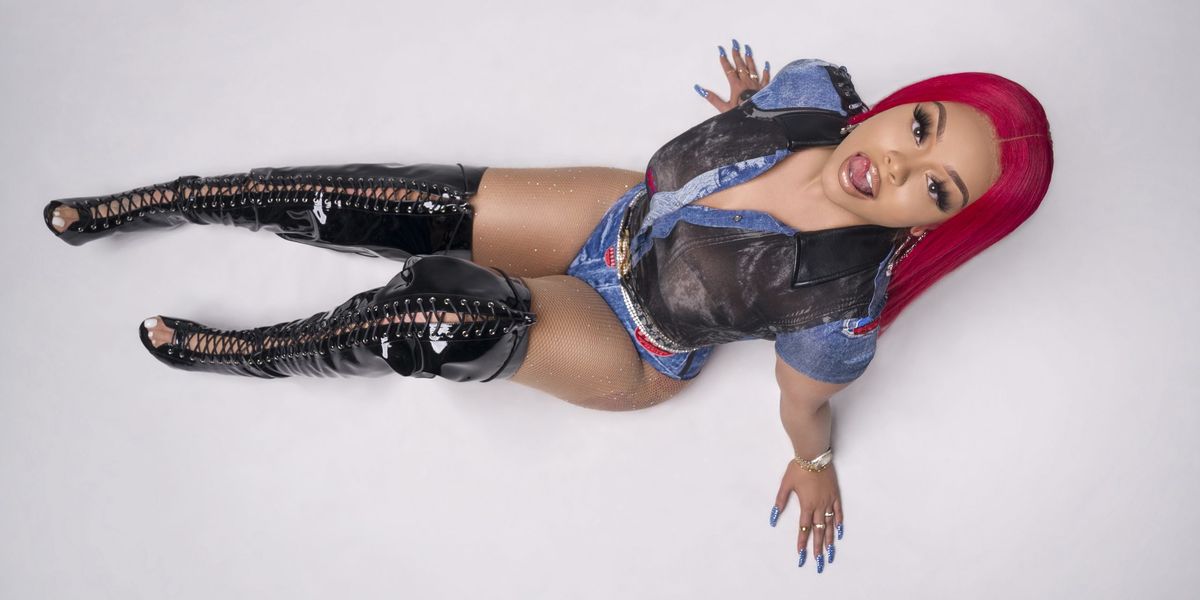 When asked to describe herself in one word, Mulatto responds with two whole sentences instead. "I got out the mud," she says. "When you see me, when you feel me, when you see me perform, and feel my energy, you feel that hunger." The 21-year-old rapper from the Southside of Atlanta is hungry for a Grammy nomination and Nicki Minaj collaboration by 2030. She's a "real-ass, rich-ass bitch from the Souf" who prides herself on being raw and authentic with her "Mula Mob" fanbase, team, parents and collective of childhood friends who have supported her throughout her 11-year journey to mainstream success.

Her latest release Hit The Latto is the embodiment of five years of growth from the artist formerly known as Miss Mulatto, winner of The Rap Game at the age of 16, to Mulatto: the grownup version who has conquered adversity and fought to be respected among her peers. Over six songs, she raps about her fondness for Lamborghini and McLaren (a nod to her past as a drag racer) through a slew of car-inspired references about her lived experiences of having that "wet-wet" that'll make you pass out. The EP draws inspiration from Trina's Da Baddest Bitch, a pivotal album in hip-hop through its bold proclamations of sexuality, luxury and power from a woman's perspective. On Bitch From Da Souf (Remix), Trina and Mulatto share the track with Saweetie, but the best moment comes where the duo rap about having their partners perform oral sex on them until they get "lockjaw."

Find out Mulatto's journey to Hit The Latto, and her aspirations for a unified female collective in hip-hop below.

It's been a breakout couple of years for women rappers, especially those from the South. What does it mean to be in this moment where legends like Trina are finally being awarded for their contributions, and supporting the next wave of rappers such as you and Megan Thee Stallion who are authentically Southern?

There's definitely a shift in the industry because for the longest, Southern rappers and Southern rap period was underrated. We were overlooked in lyrical content, so to have a focus on female Southern rap is real dope. We're getting the credit we deserve. Southerners have been rapping for real, but it's our time right now, especially females.

At the age of 10, you started rapping across Atlanta. A decade later, Trina is featured on "Bitch From Da Souf (Remix)", your charting single from Hit The Latto. Did she share any lessons with you to keep in mind as an emerging rapper?

I have the utmost respect for Trina, period. She's an OG in female rap. As a woman, she gave me good advice, like, "You're going to have it harder because you're coming from The South. There's going to be a lot of commentators, but stay focused." She was genuine, and kept it 100 with me. Stay focused, and not let men distract me.

Similar to Trina, you share a commonality of being supportive and welcoming to your female counterparts. On social media, you're the first comment and retweet underneath a new single or video premiere. What's your rationale for ensuring that women rappers are united, instead of feeding into industry rivalries?

Clear evidence of this was "Thot Box (Remix)" with guest verses from Young M.A, Dreezy, and Chinese Kitty. A female perspective of the Hitmaka's original version that featured Meek Mill, 2 Chainz, YBN Nahmir, A Boogie wit da Hoodie and Tyga.

At the age of 16, you won The Rap Game and transitioned into the industry as a professional who was doubted because of her age. A shared experience that Lil Kim spoke about when she debuted at the age of 19 with Junior M.A.F.I.A., and changed the industry's perception of women rappers. Five years later, are you still being doubted by industry veterans and your male counterparts?

Industry wise, The Rap Game gave me that big break, even though I had been rapping since the age of 10. A lot of my career, I was overlooked and underrated because I was "too young." I've had people tell me, "Oh, she doesn't have a chance of making it until her braces are off." At first, those comments discouraged me: "Oh, well I'm not going to make it until I'm an adult." Being a youth and female, it felt like all the odds are against you. Now, I'm very appreciative of it because I'm seasoned, prepared, and ready for whatever because I've been doing this for so long.

The best material from rappers is often when their back is against the wall. Did you use that experience as a stepping stone for Hit The Latto? Because there's a distinctive difference between the recently released EP and your previous projects.

Hit The Latto, my third project, is about my experiences as a woman at the age of 21, and it's an adjustment for people to know the new mature me. I dropped the "Miss" from my name on The Rap Game, because I have new things to talk about my growth from a teenager to a woman, and as a rapper. It's a continuance of my five years of growth. People forget that I was 16 years old when I won The Rap Game, which was hard enough, so now at the age of 21, I'm blessed to have a supportive foundation and creative control from my parents and team to let me lead the way and back me 100%. It wasn't like, "I'm going to start rapping about dick now, and be more sexual." It's just me growing up. I'm sure other people don't want to be held accountable for the things they did at the age of 16.

Rappers who participated in reality televised competitions, such as The Rap Game and Rhythm & Flow, they've experienced pushback for being inauthentic. In addition, women participants are questioned on their ability to write lyrics, and accused of having male ghost writers.

I started off the OG way. At 10 years old, I wrote in the studio with pen and pad, performed at talent shows and cyphers. So, I laugh when people question my pen, because that's how I started. I didn't come up in the social media era where you have a bunch of followers then turned rapper. Before I started rapping, I wrote poetry and competed against high schoolers and college students in the fifth grade. As a female rapper, they always question your pen, period. But when it comes to me, Mulatto, I laugh.

If you could go back in time and talk to yourself at 10 years old, what would you tell her?

"Girl, be patient." Because I had a lot of times where I wanted to give up, so I would tell myself to keep working. And lock down on your craft earlier without distractions. I would have told myself to focus at a young age, and not allow people to get in my head, but I'm definitely proud of myself.