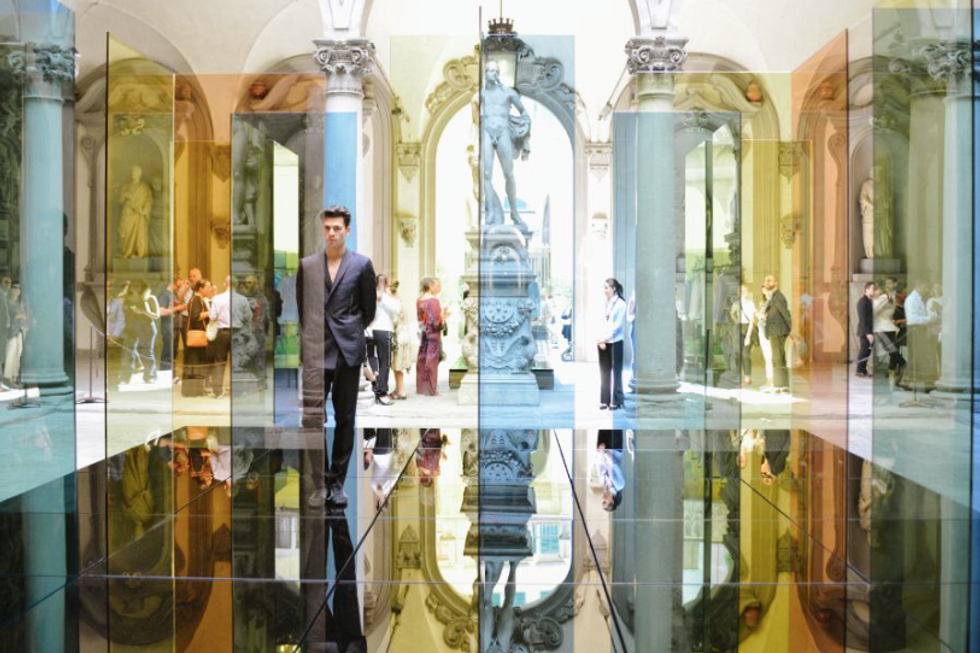 Day Two of Pitti Uomo is really the marathon day and things started off bright and early at the former Leopolda train station for the Arthur Arbesser show. Austrian-born, Milan-based Arbesser graduated from Central Saint Martins and launched his women's collection in early 2013.  His second collection won him the Italian Vogue 'Who's On Next' prize and this year he was a semi-finalist for the LVMH prize. At Pitti he showed a women's collection with a handful of androgynous men's looks. He has a great eye for patterns and shape and it was announced today that he's the new creative director of the Italian brand Iceberg and will show a collection for them in Milan this week.

After leaving Arbesser's show, I headed to see Carlo Brandelli's collection of updated chic suits for Kilgour, which was shown at the Palazzo Medici Riccardi. Florence is one of the most gorgeously historic cities in the world and so many of the venues for Pitti are more stunning than a museum. The lone model, wearing the lightweight suit shirtless in the vast vestibule of the palace seemed like a modern day counterpart to Michelangelo's David, which stands at the nearby Accademia.

Meanwhile at Emilio Pucci, new creative director Massimo Giorgetti, who also designs the popular label MSGM, showed his debut for the brand, appropriately titled "The Pilot Episode," at the former factory of the royal mews. Giorgetti stayed true to the brand's history of prints but modernized them and showed them with incredible handbags that had our inner bag-hag foaming at the mouth.

Thomas Tait, winner of the inaugural LVMH Prize last year was the guest womenswear designer at PItti Uomo (yes many designers show women's along with their menswear but Tait showed exclusively womens). He did a presentation at the gorgeous Boboli Gardens, which featured items from past collections redone in new materials. It also featured streaming video of Tait in conversation with several muses of the brand including fashion writer Cathy Horyn. Tait certainly has no shortage of artistic ideas and it was a treat to see his creavity at work in a beautiful, well-lit space. The presentation was followed by a party in the gardens -- what a perfect way to end a long, full day of international fashion, sipping lemonade in the former gardens of the Medicis!