Mr. Mickey and Abby Rate the Fashion at the Oscars

Award season's big kahuna took place last night and, aside from watching Seth MacFarlane make some uncomfortable jokes about women, see way too many musical references to movies from the 2000s (that would be Chicago and Dream Girls) and get excited when Argo took home the grand prize, our eyes were fixed on the fashion at the Oscars. Scroll through to see all of the best red carpet looks and to find out whom we thought must've taken hair styling tips from Lance Bass and who looked like royalty. 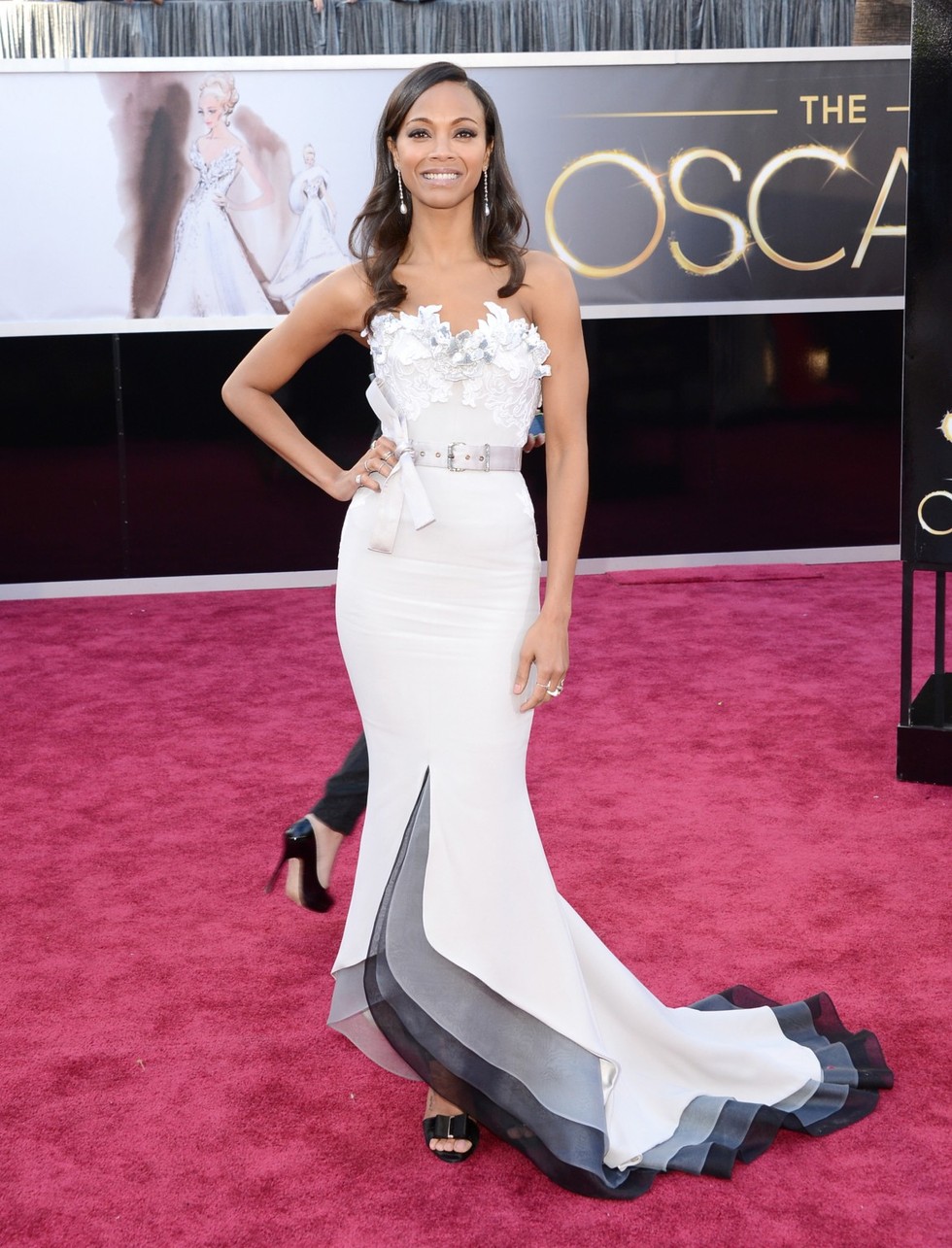 "I give Zoe props for usually being more experimental than most on the red carpet but I'm a little undecided when it comes to this one. I think that I'd love it if she nixed the belt and side bow -- they're too distracting." -- Abby

"She's beautiful and always makes interesting choices. I don't remember ever seeing Alexis Mabille on the red carpet and it was interesting." -- Mr. Mickey 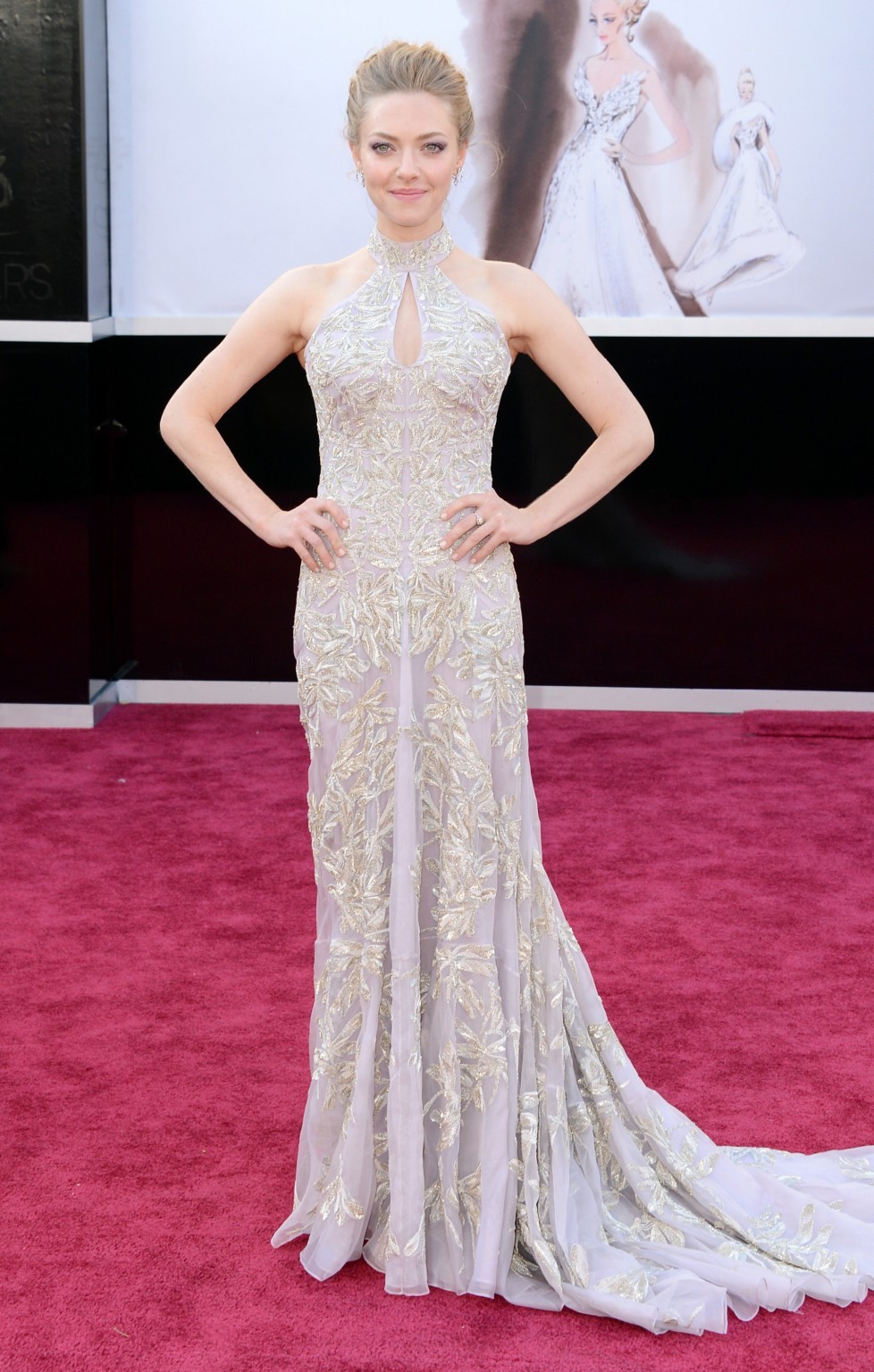 "I thought the gown washed her out and throughout the red carpet, the halter seemed to hang funny like there was too much fabric or something. Not my favorite look on her." -- Abby

"I disagree. Loved her McQueen gown. Loved her Givenchy Couture gown (the one she performed in). The hair wasn't my favorite favorite but she always gives a very Fashion look which I appreciate. She's definitely one of the most interesting stars on the red carpet." -- Mr. Mickey 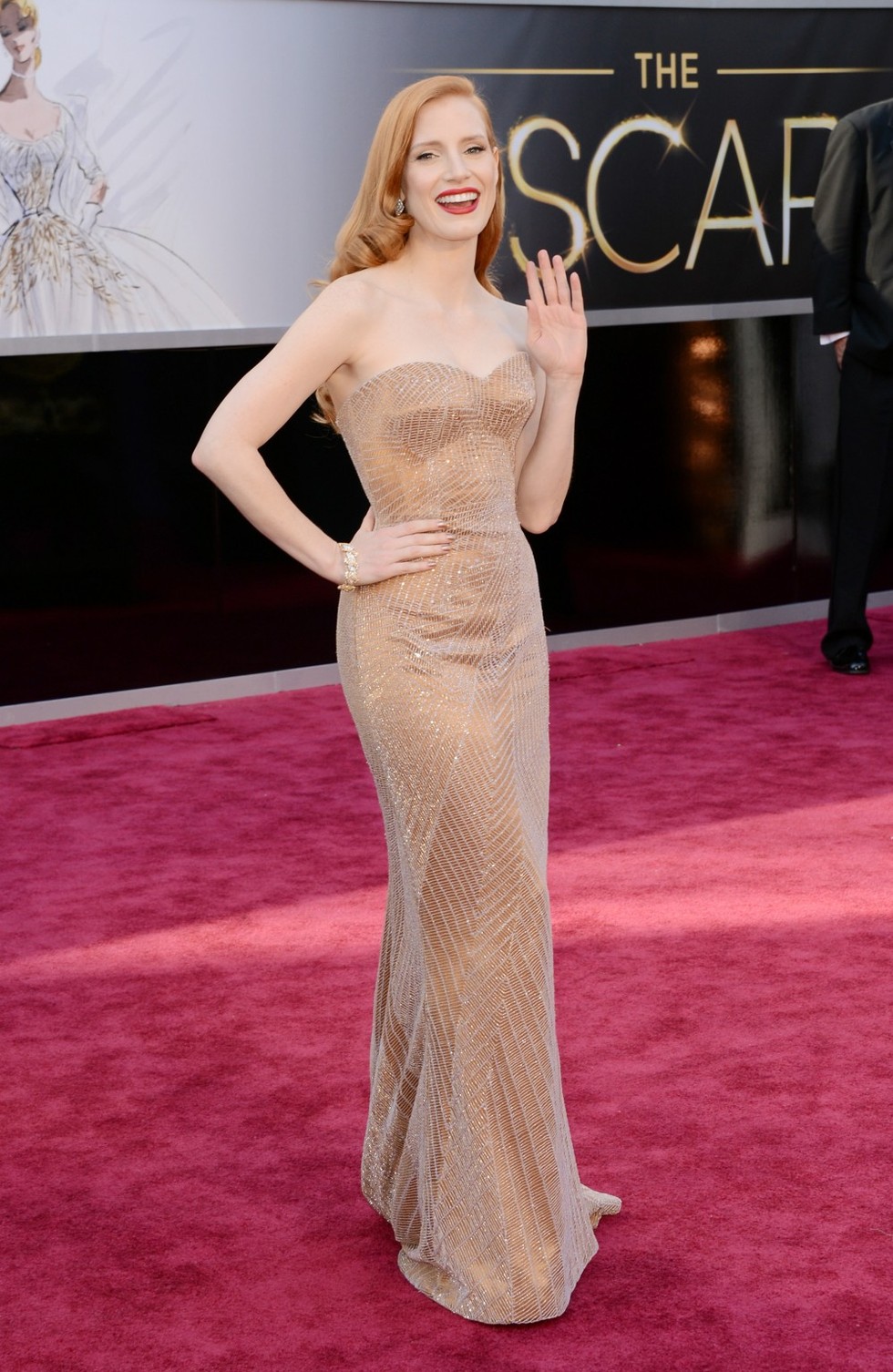 " I often don't get Jessica's red carpet choices but I happened to really like this one. Nothing too unusual and not terribly daring but it was a beautiful dress and who would've guessed that the color would look so great on her and not wash her out? A much better choice than her Golden Globes dress." -- Abby

"I agree -- she never looked better. I hate strapless but her Armani Privé gown was heaven. The hair and makeup were also super chic and glamorous. I don't know if she changed stylists but recently she's been knocking it out of the park." -- Mr. Mickey 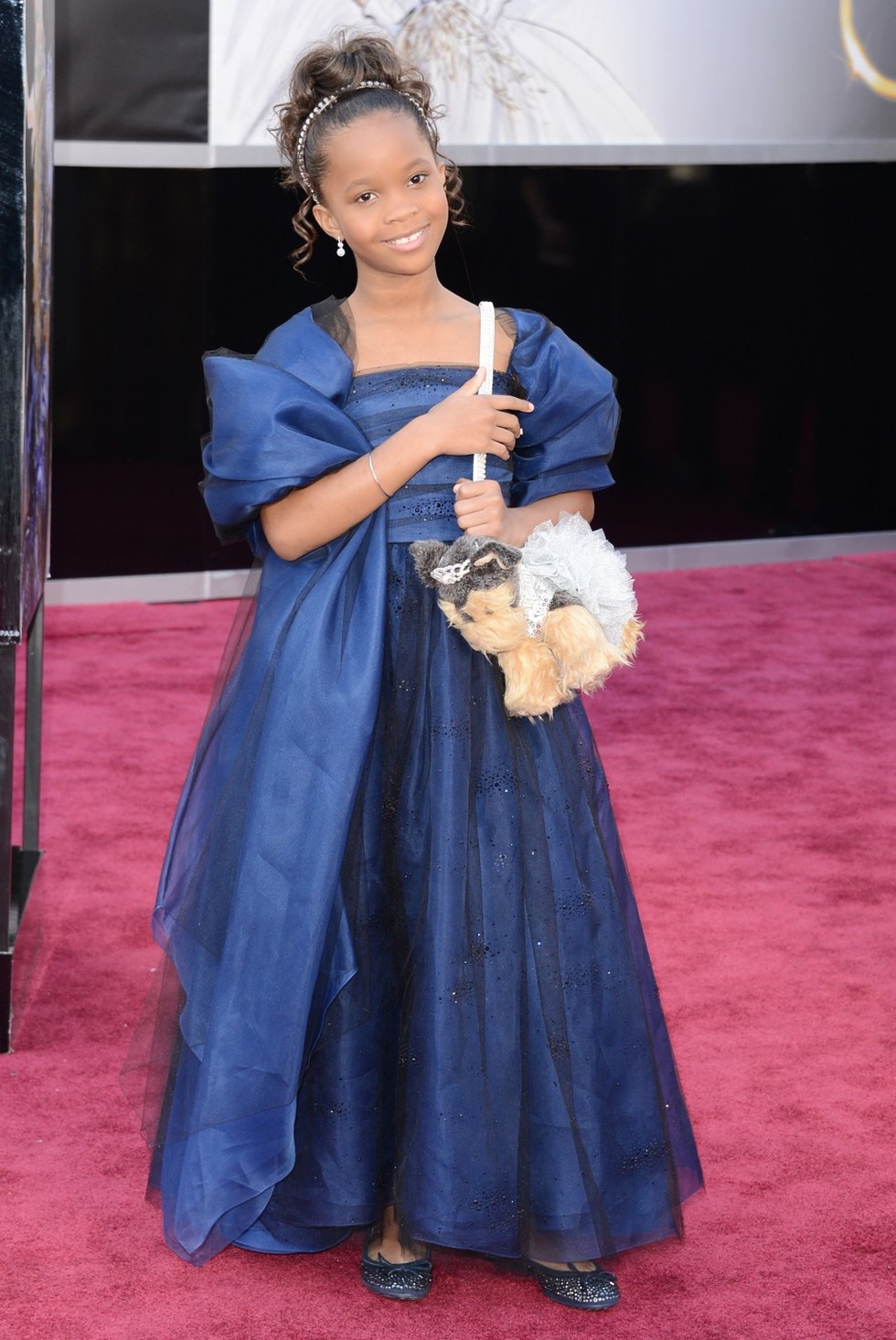 "'Little Q,' as friends call her (sadly, I'm not on that level...yet), knows what she likes and that would be puppy purses. I love that and love that she's allowed to be a kid -- she's so cute in all of the interviews she gives and comes off like a sweet 9-year-old instead of some overly-coached precocious little ten-year-old-going-on-thirty." -- Abby 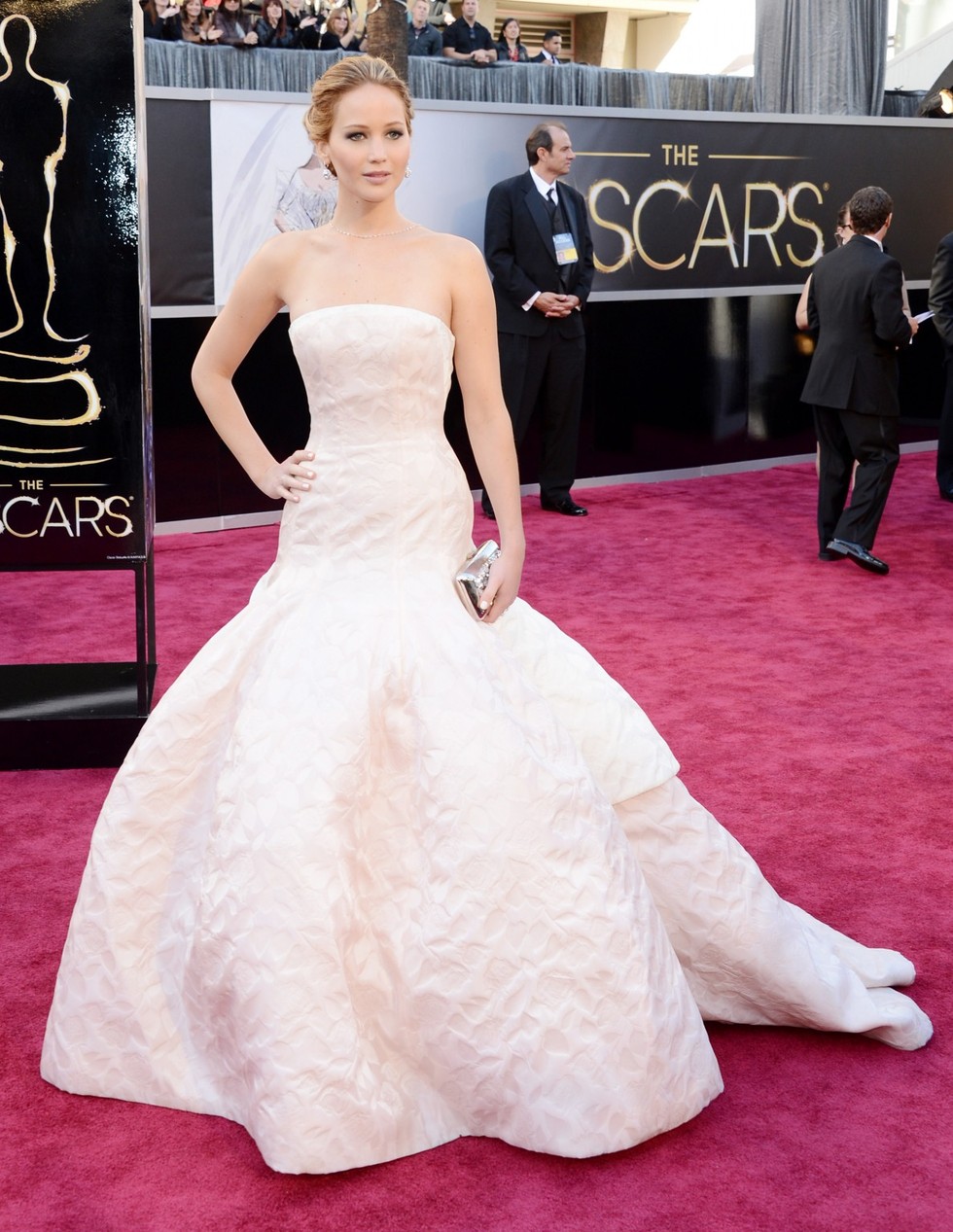 "I thought Jennifer knocked it out of the park. Her Dior haute couture was so high-fashion and sophisticated. Whereas a lot of the other actresses on the red carpet wore pretty but 'typical' red carpet gowns, Jennifer's look was very Met Ball-esque." -- Abby

"Agreed. Don't you really wanna be friends with her? She seems so real and so cool and I thought she looked great in her Dior Couture. The giant poof at the bottom complicated things but I thought she was adorable when she tripped. Brought back memories of Barbra Streisand tripping in her Scaasi sparkle pant suit back in the day." -- Mr. Mickey 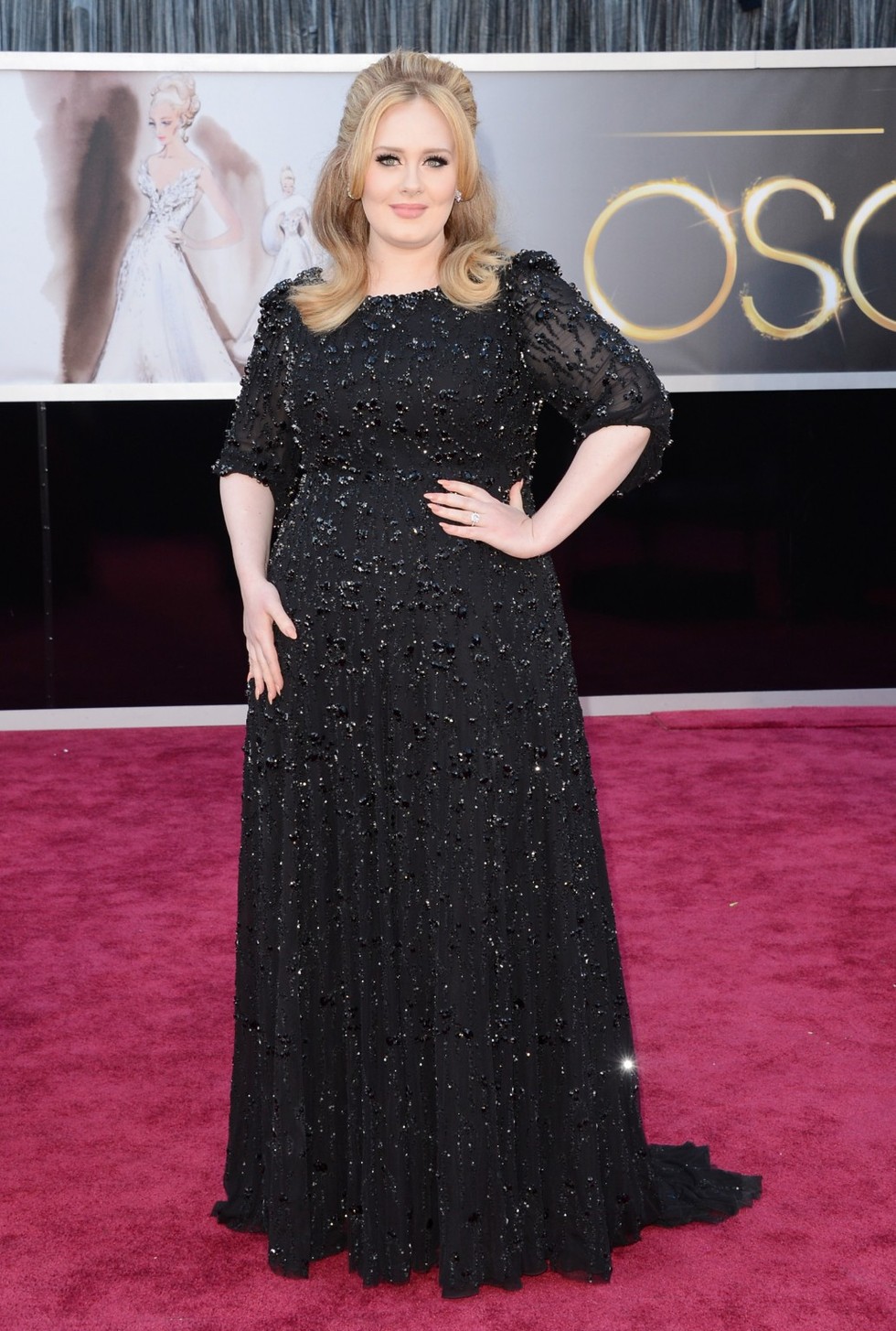 "This dress was fine but I really loved the cocktail dress she sang in. I like that she has a signature look. It was crazy seeing her stand with teeny weeny munchkin Kristin Chenoweth on the red carpet, though!" -- Mr. Mickey

"I agree -- I like that Adele has a signature look and you know what you're gonna get. She looked great." -- Abby 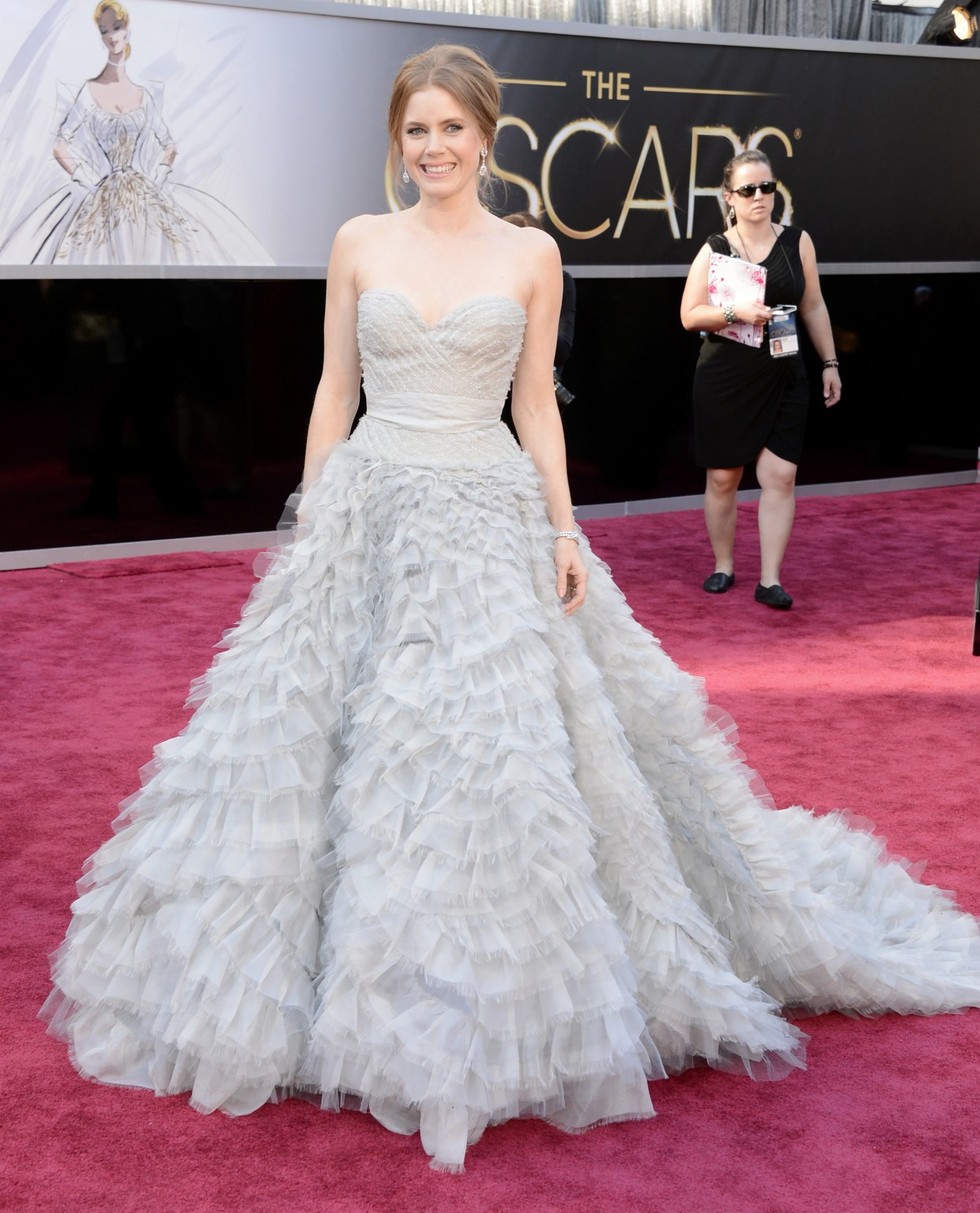 "Loved the Oscar de la Renta. Too bad she had the worst hair of the night. Messy but not in a sexy beachy way." -- Mr. Mickey

"Huh. I didn't take much offense to her hair but I'm never a fan of the big, tulle-y skirts. It just looks like it's made from a bunch of toilet paper or something to me." -- Abby 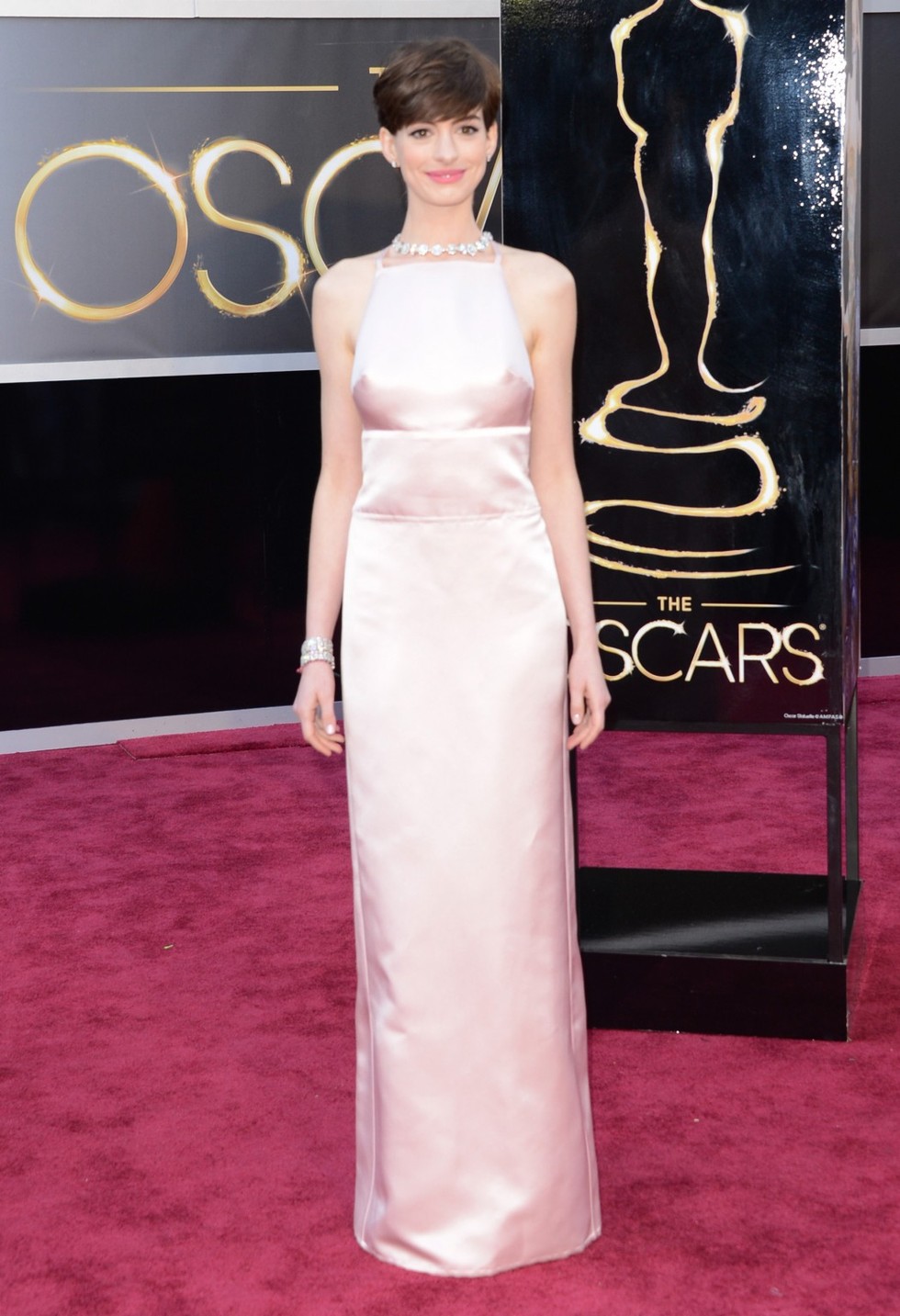 "She's super beautiful and talented. Her acceptance speech sounded phony and annoying but not as phony and annoying as I expected. The Prada dress was an unusual choice but she looked great. She looks great always." -- Mr. Mickey

"I disagree about her dress. I thought it felt like a much, much, much more expensive version of a prom dress you remembered seeing in She's All That. Pass." -- Abby 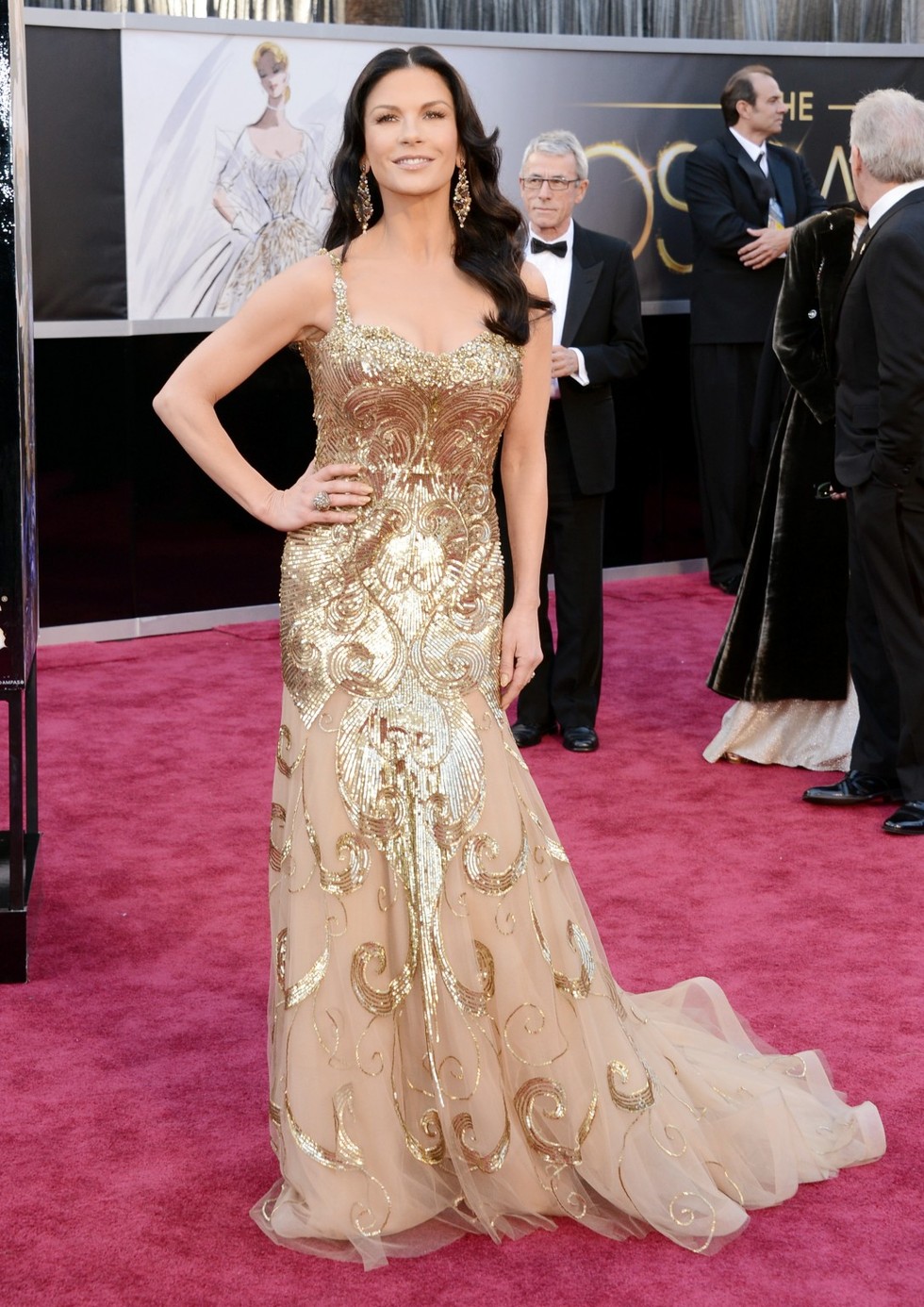 "She's statuesque in every sense of the word. And I like that it's so over-the-top." -- Abby 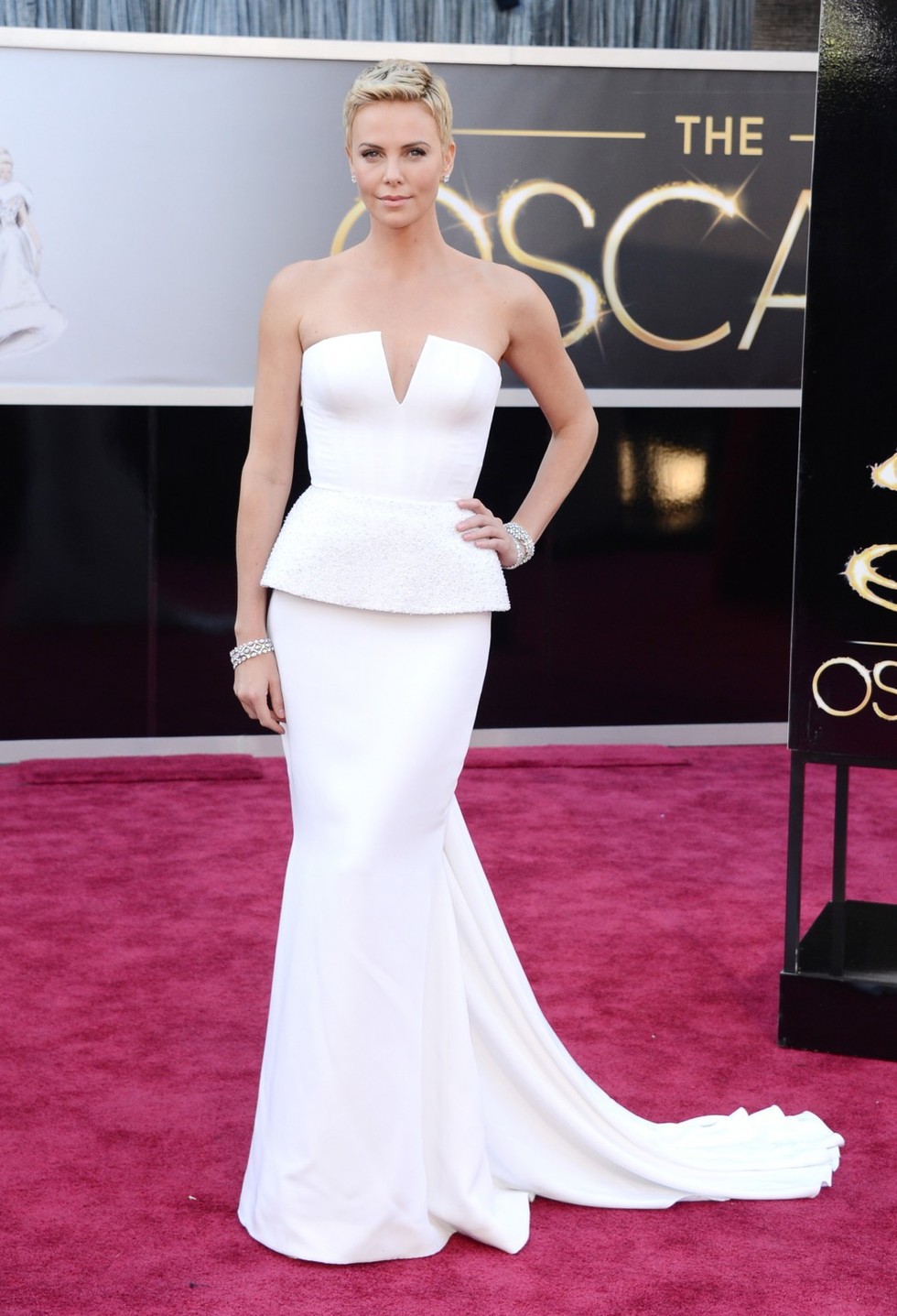 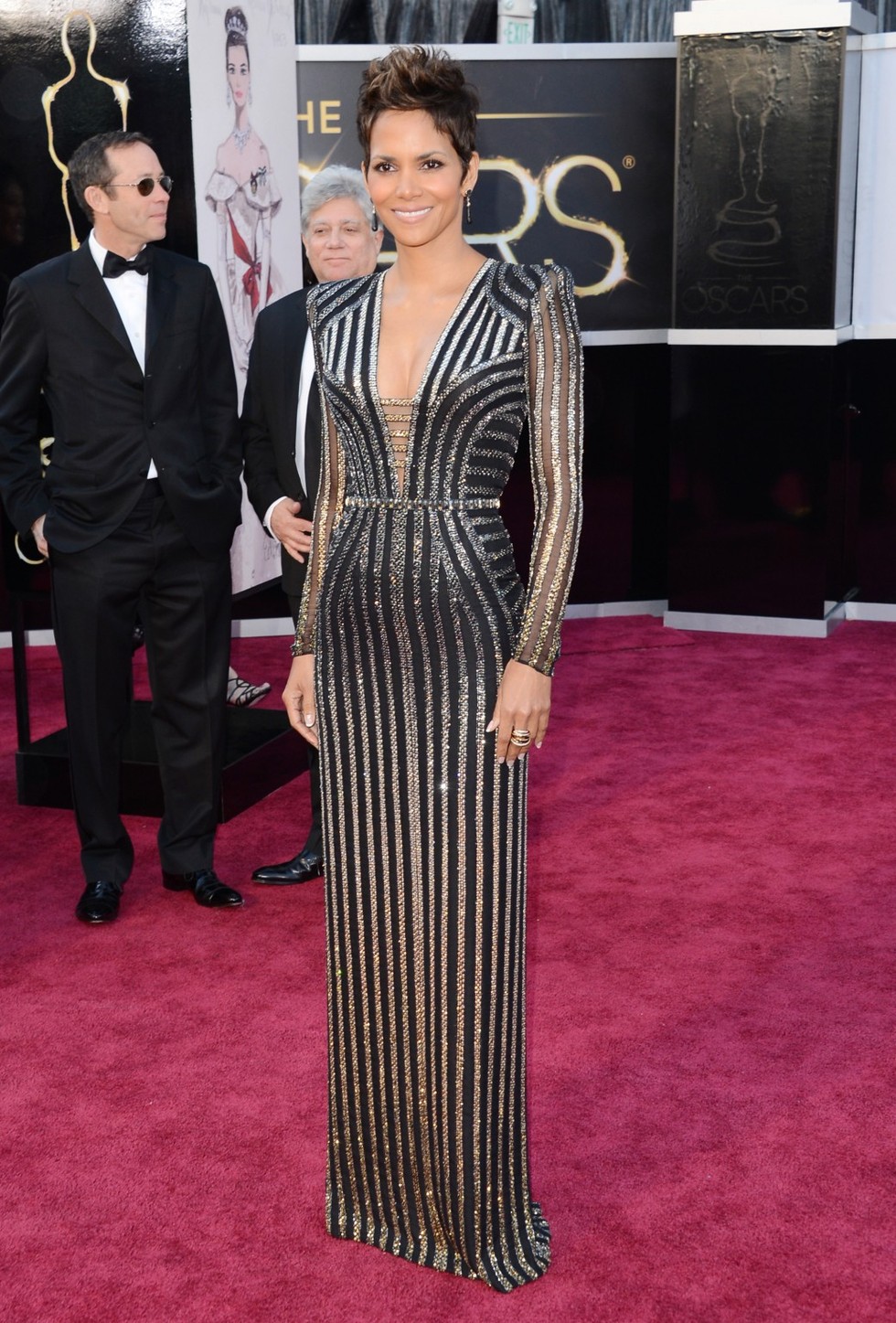 "What a nice change from that horrid gown she wore to the Golden Globes dress. This was interesting, flattering, and very cool." -- Abby 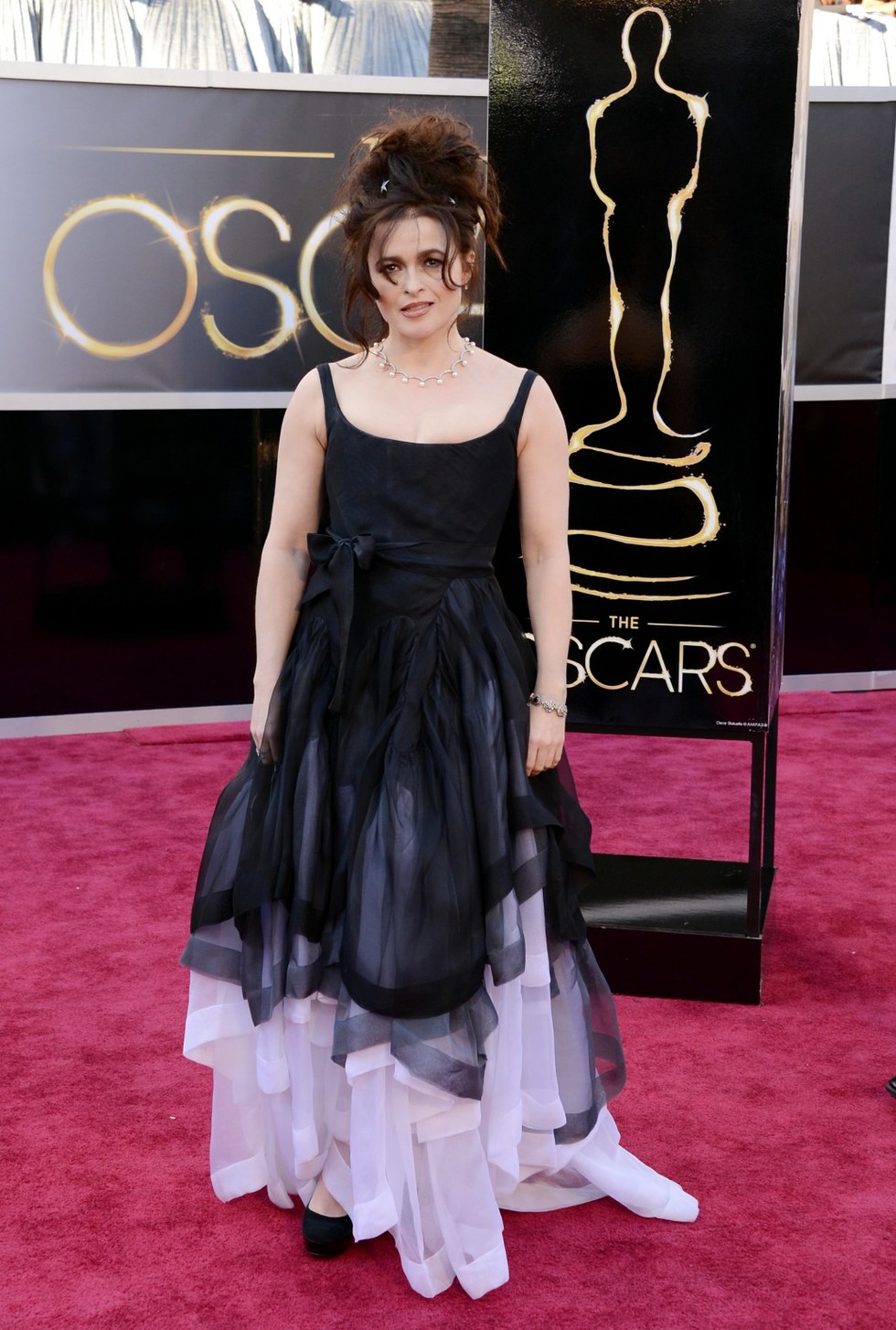 "We always see this look on Helena so it's a little bit of a snooze for me. That aside, what I am struck by are those little clips in her updo. Everyone says the 90s are back but they mostly mean grunge and the early 90s but after seeing Helena, Charlize and Anne Hathaway on last night's red carpet, I'm getting flashbacks to 1999: butterfly clips, spaghetti straps, frosted tips...the works." -- Abby

"Crazy just like we want her to be. She's the only person on the red carpet with any personality or eccentricity. Except the woman who won for Costume Design. She looked great, too." -- Mr. Mickey 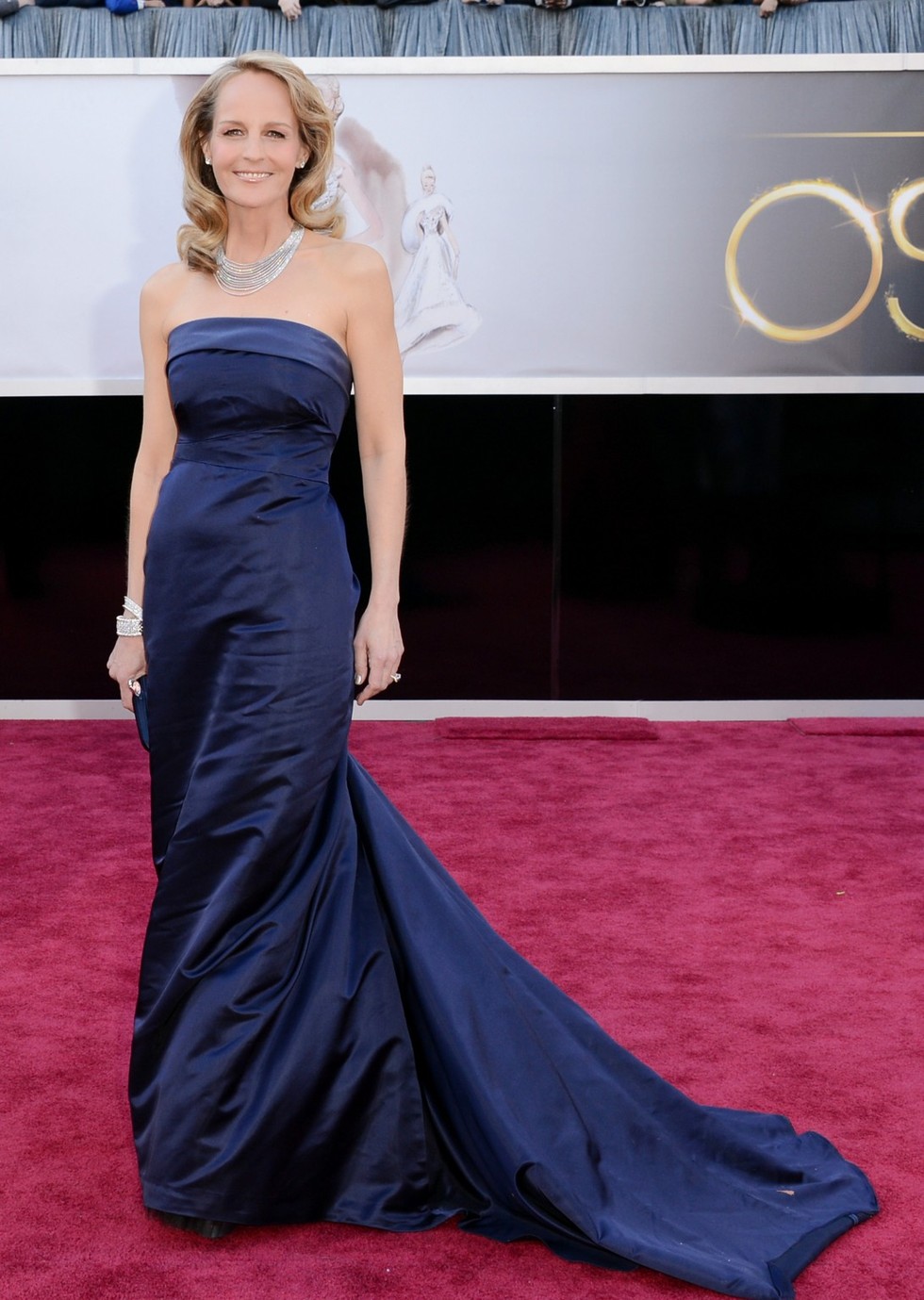 "I love that Helen wore H&M but -- and I'm a total broken record -- you have to be so careful with dresses like that because they show wrinkles! She looks very elegant though." -- Abby

"My thoughts exactly. Love the H&M couture but she could have used a steamer." -- Mr. Mickey 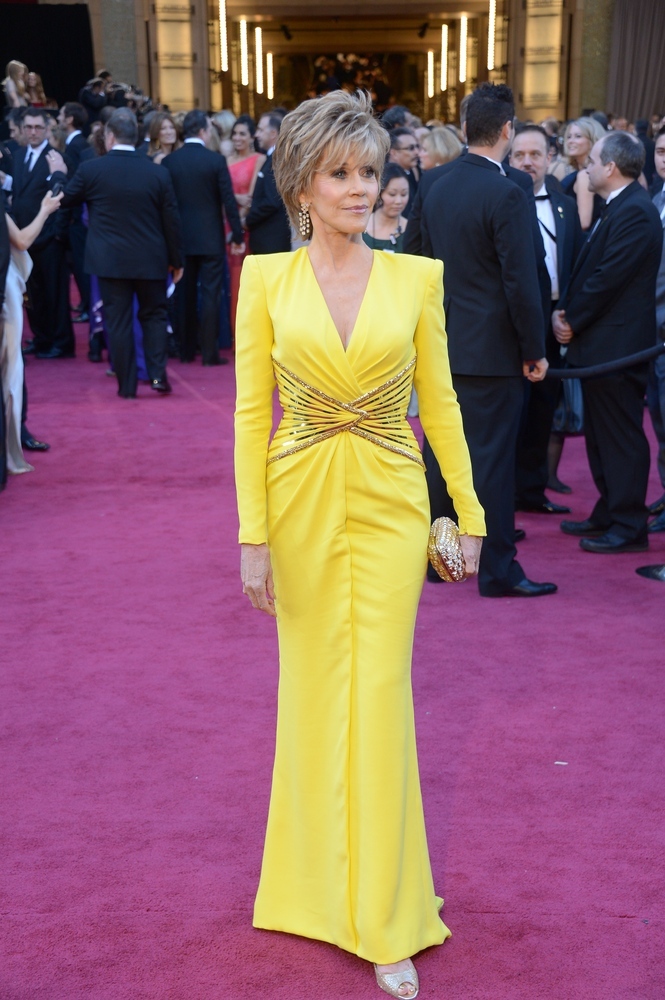 "Thank God for Jane Fonda to liven this red carpet up. She reminds me of a high-powered 80s executive who just slipped off her Reeboks and socks before hitting the red carpet in heels. She's awesome." -- Abby

"Total movie star. Love her Versace. That color popped like crazy and her body is unbelievable." -- Mr. Mickey 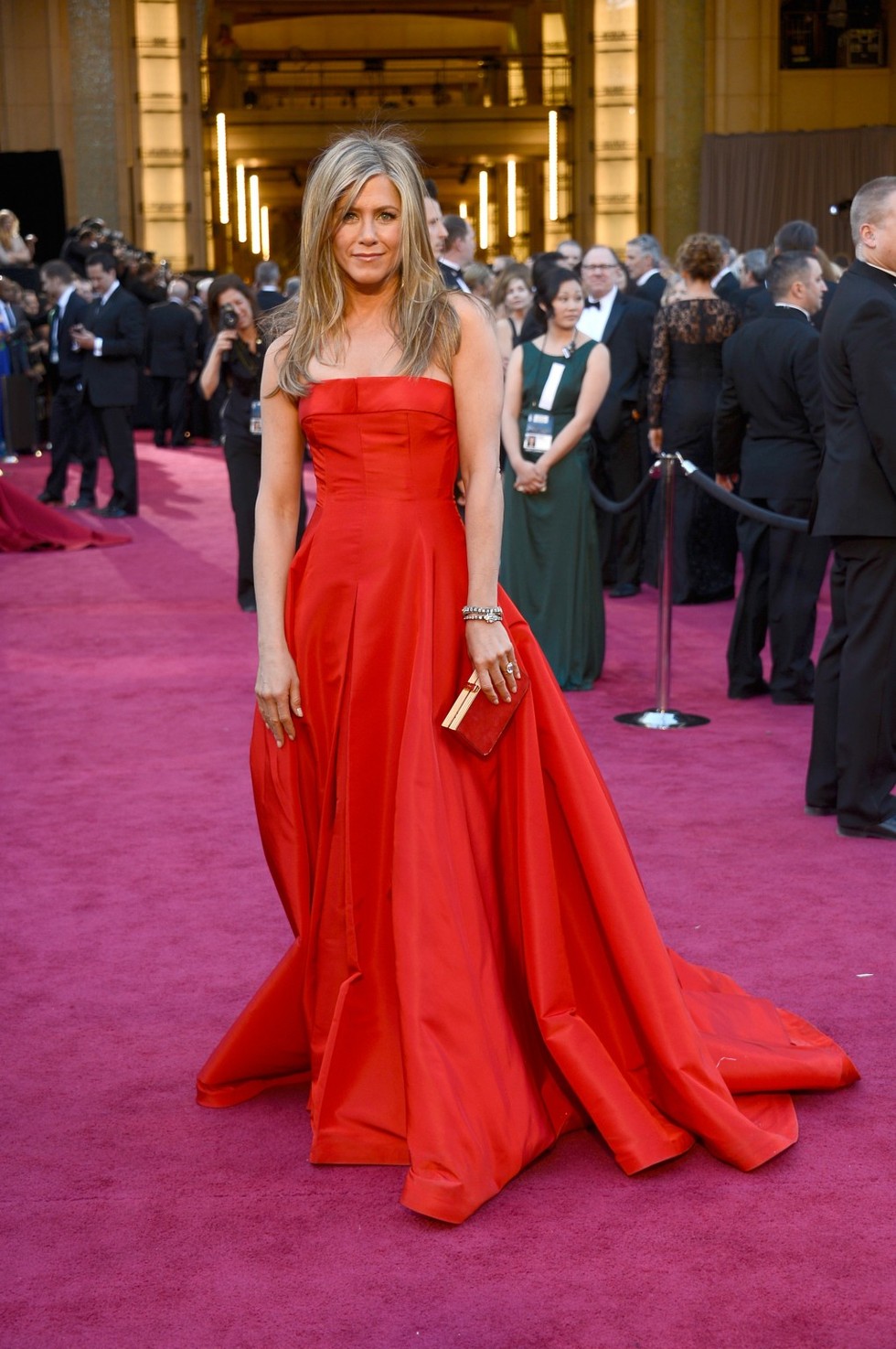 "Jennifer Aniston looks fantastic in this red Valentino gown...it won't be one of those looks you remember five years from now but she looked really, really good last night." -- Abby 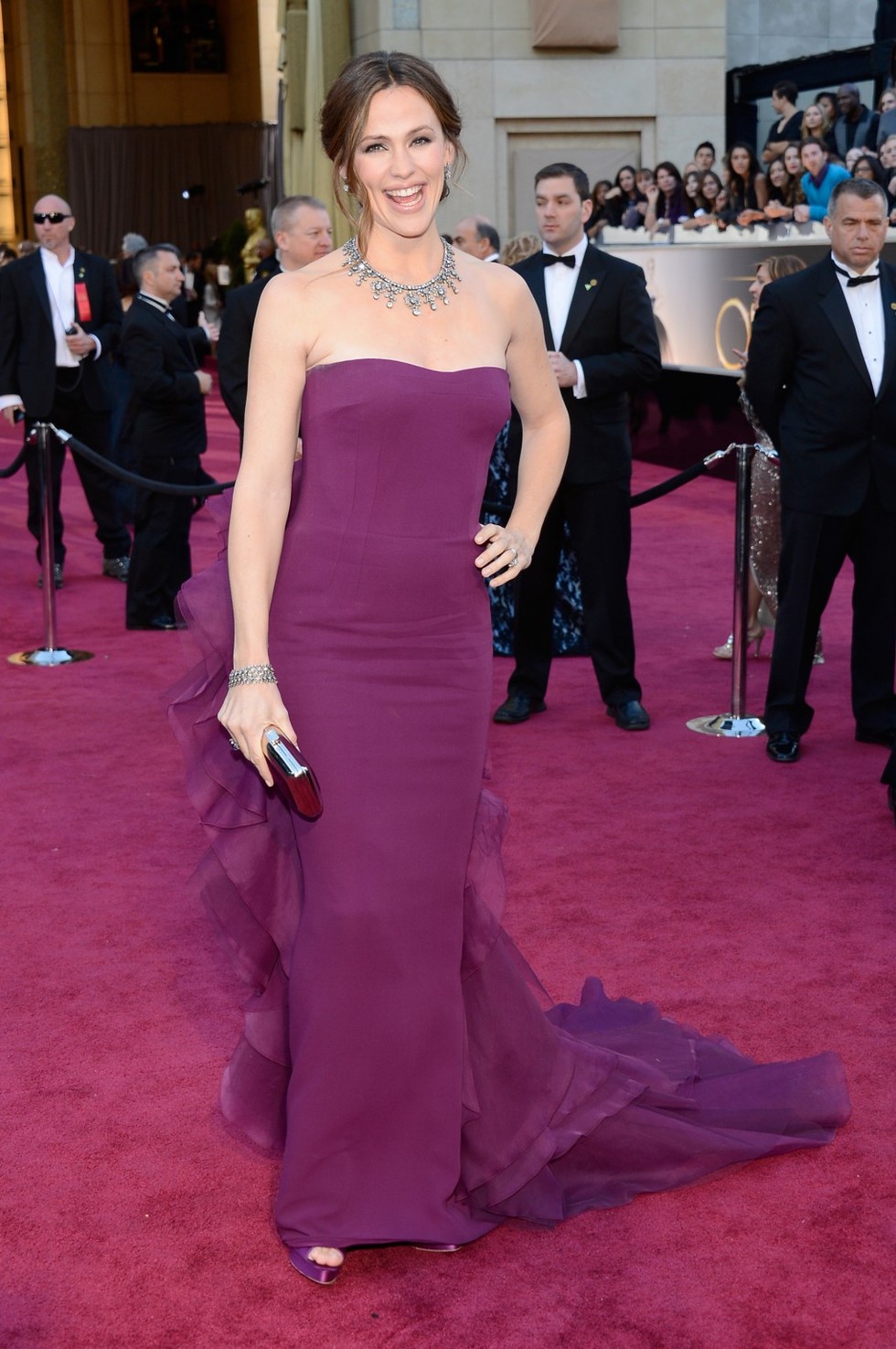 "WUT was going on with her dress? It was another one of those dress mullets: 'all business in the front and party in the back.' Or, actually, make that 'Barney's dinosaur hide in the back.'" -- Abby

"Totally agree. Ruffles down the back made it feel very dinosaur." -- Mr. Mickey 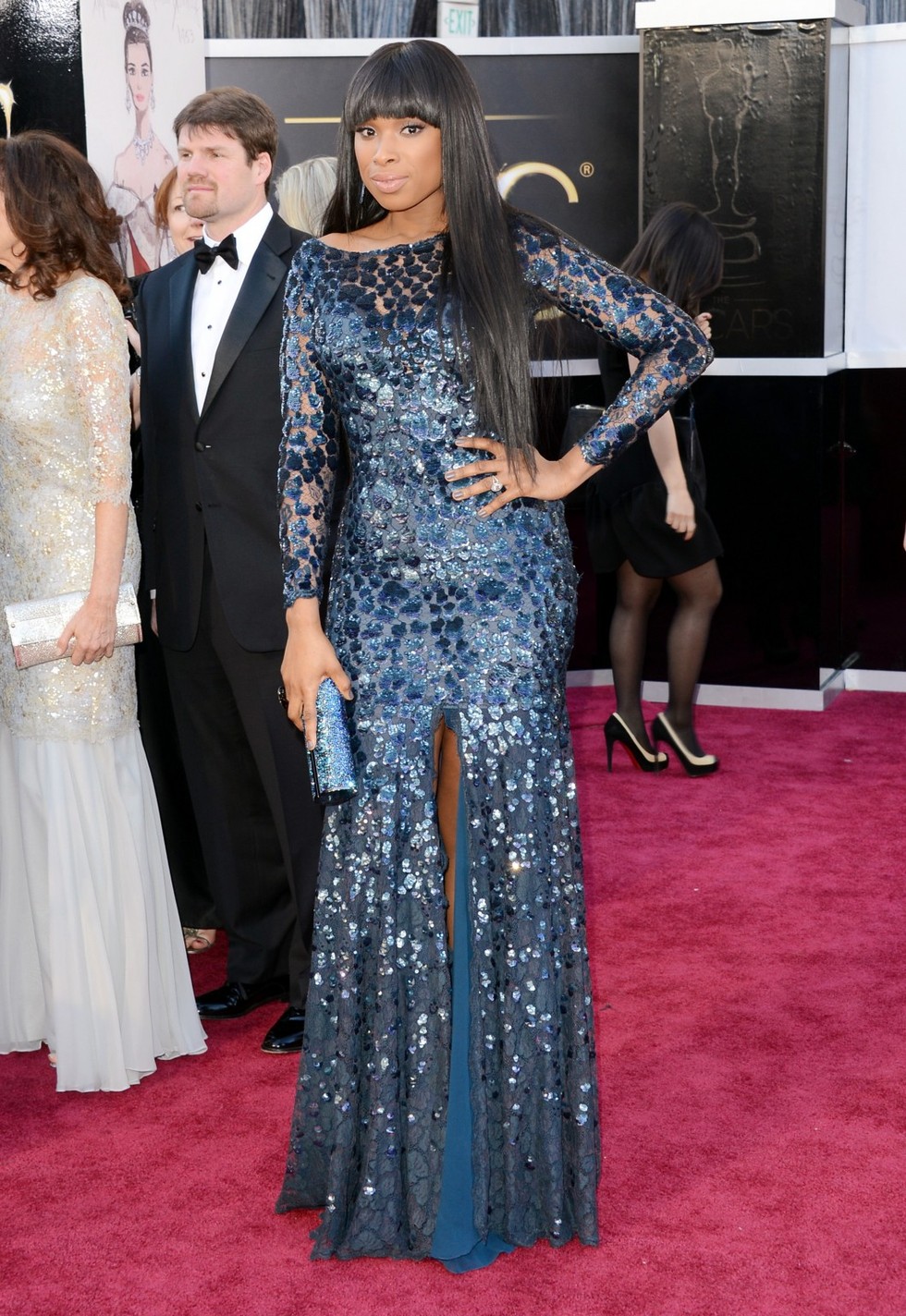 "With those sequins or appliqués or whatever they are, Jennifer Hudson reminds me of a covered-up mermaid. But I don't like the slit in her dress and, judging by her posture and slightly-uncomfortable expression, I'm led to believe Jennifer wasn't convinced she liked it either." -- Abby

"I liked the red carpet look a lot more than her performance look." -- Mr. Mickey 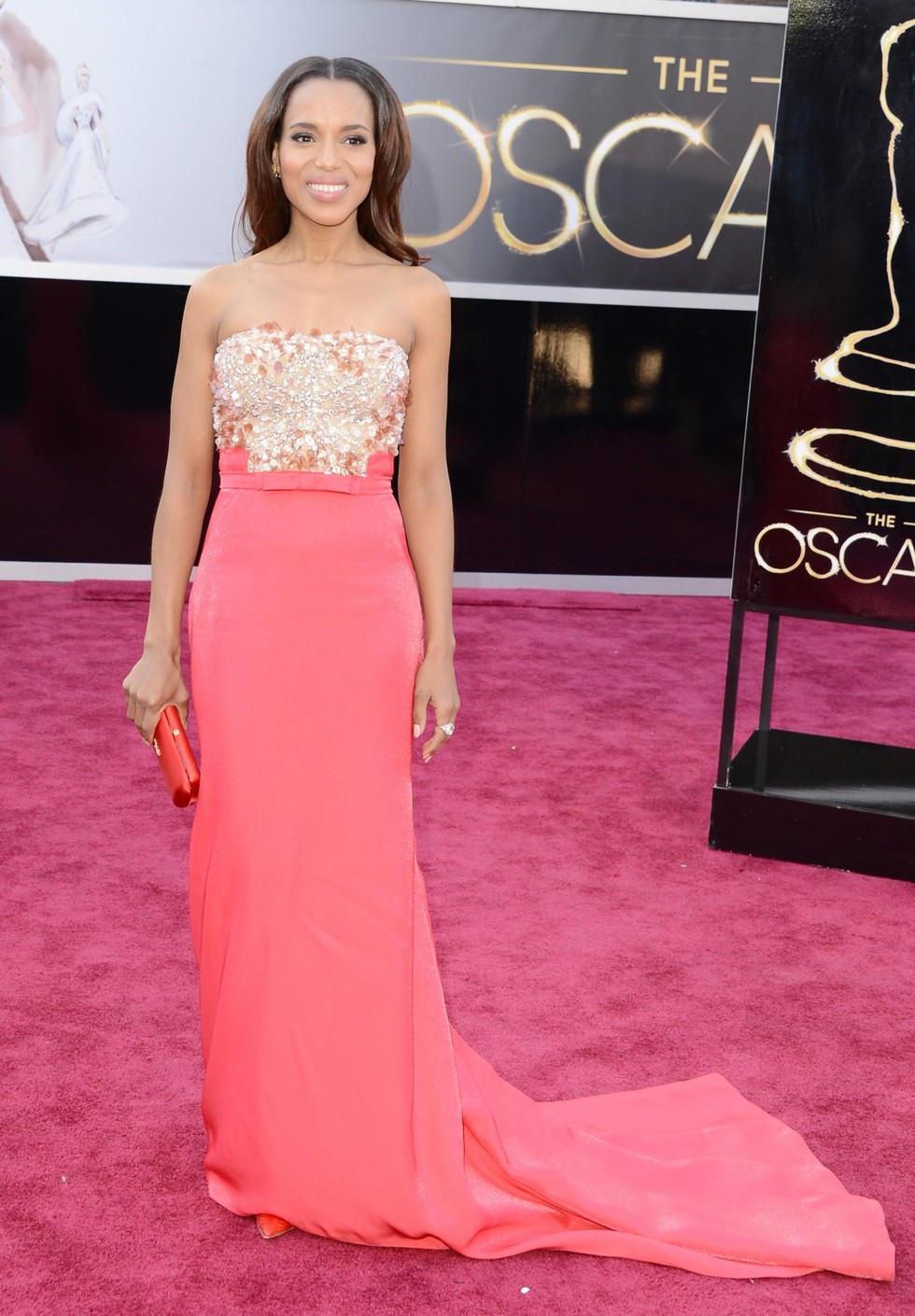 "This was a beautiful dress, in my book. I love the contrast of the simple skirt and the ornate top and the color is exquisite. Kerry's hair seemed a little off to me -- the stylist just pulled it back funny or something -- but other than that, a win." -- Abby

"I love Miu Miu. And I love Kerry Washington. I should really watch that Scandal show because Tony Goldwyn is so sexy. Anyway Kerry looked great on the red carpet. It was a cute dress close-up." -- Mr. Mickey 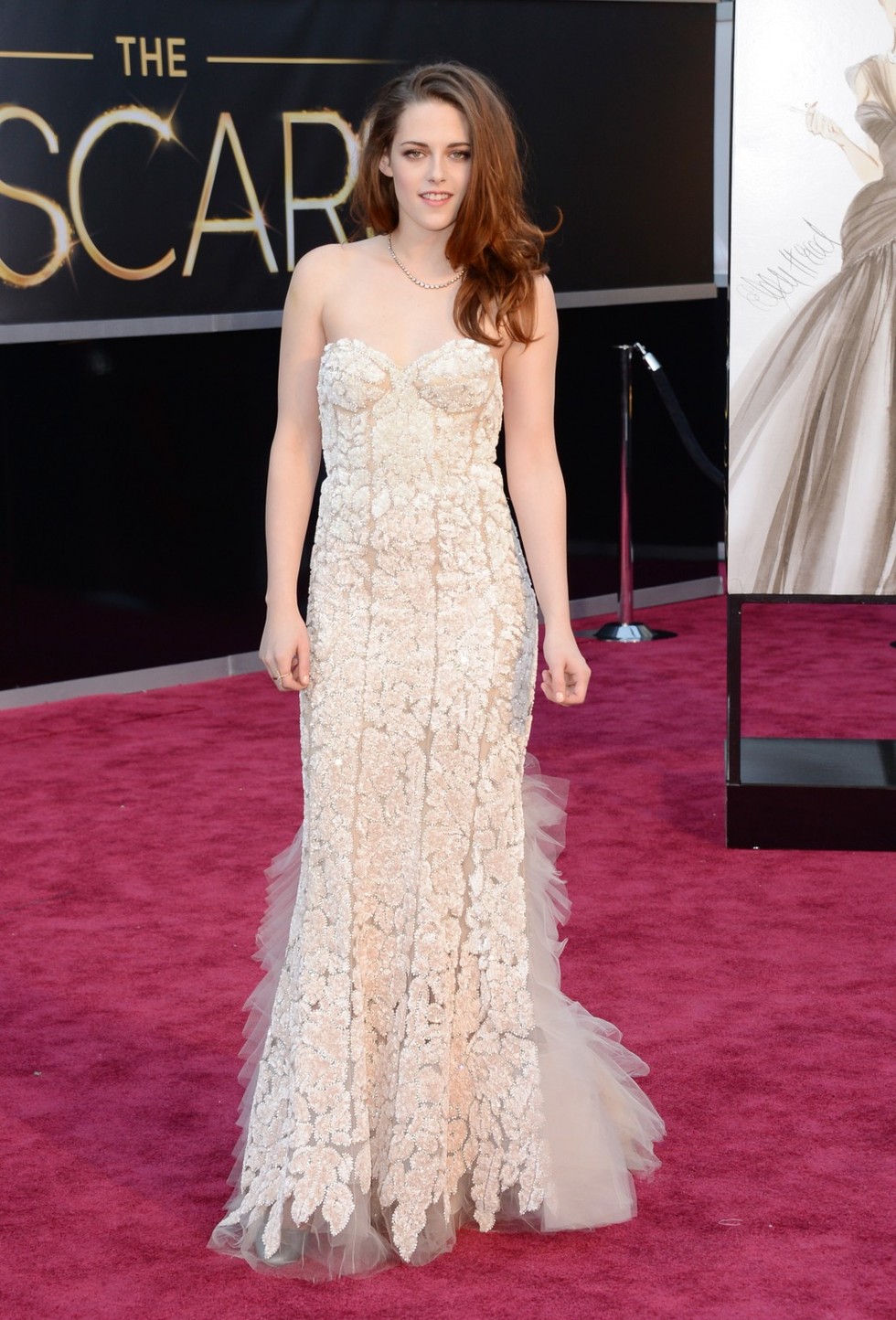 "I don't really have anything bad to say about Kristen's dress but her whole M.O. last night was so weird! You can't tell in this photo but she arrived on crutches (apparently she cut her foot on glass) and seemed -- let's put this nicely -- off. I get that that's her usual schtick but c'mon, it's the Oscars! Crutches notwithstanding, pull it together!" -- Abby 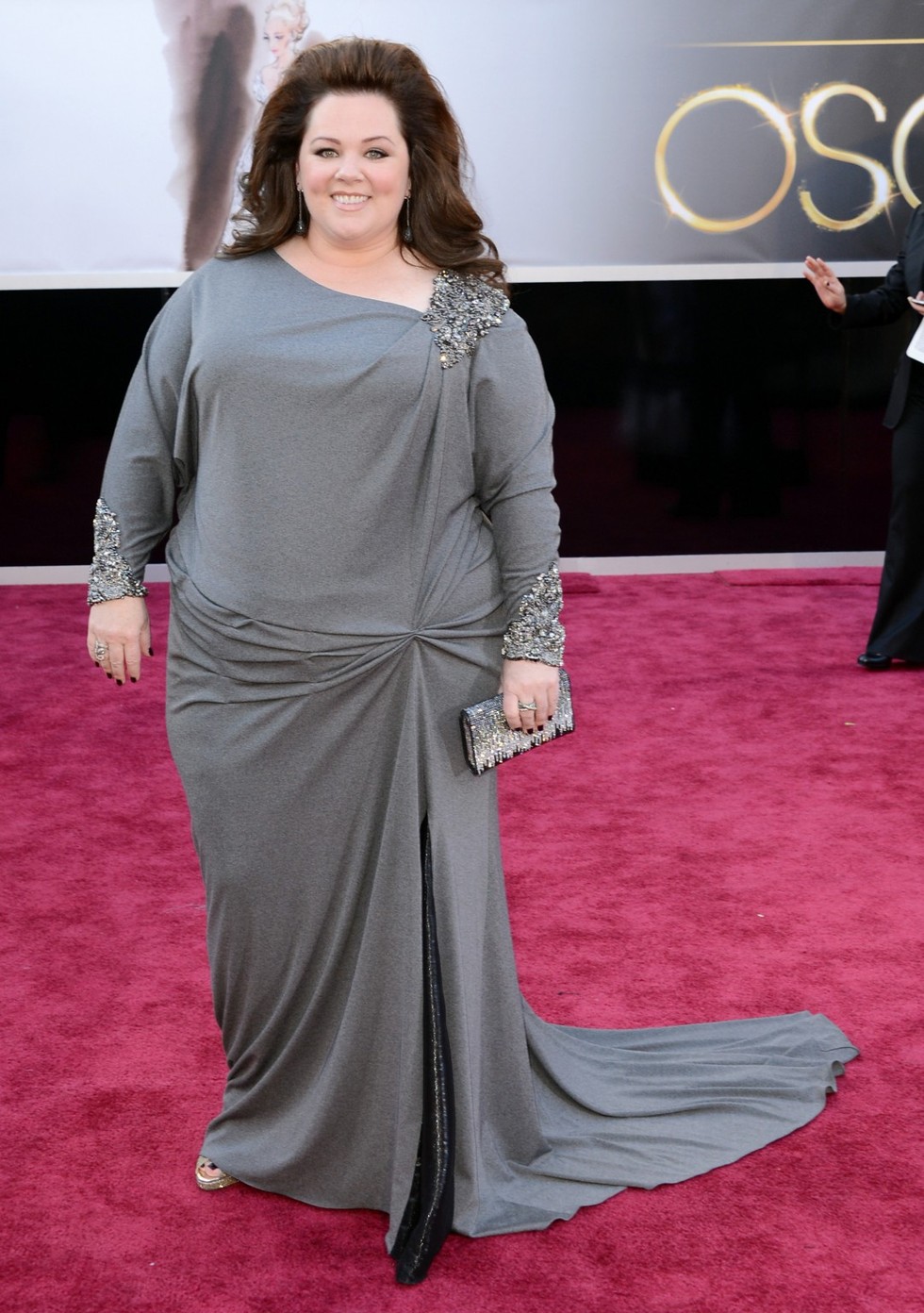 "This dress wasn't flattering on Melissa. The hair was a bit cray cray but I actually liked it. She's fun and adorable." -- Mr. Mickey 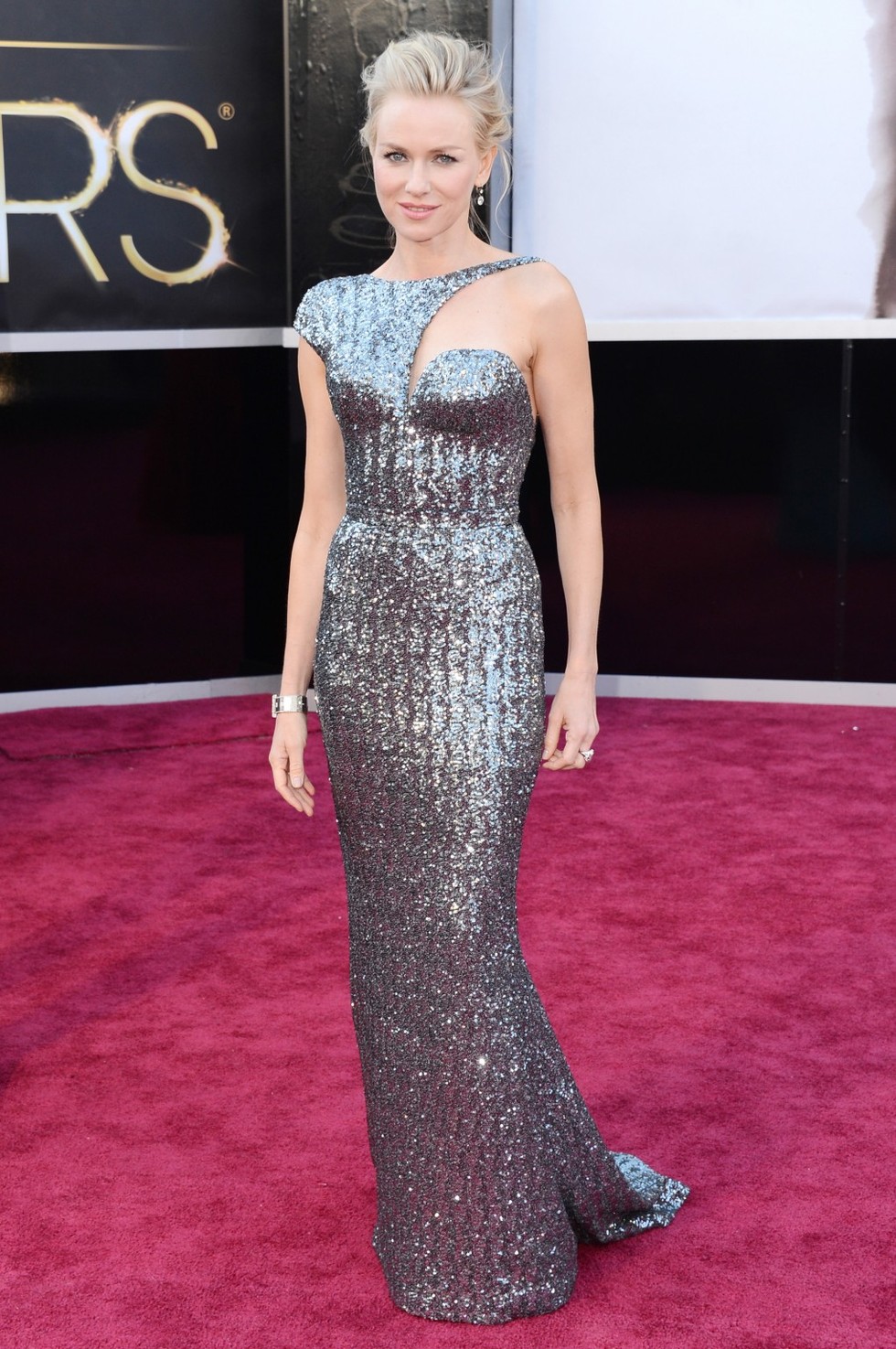 "Gorgeous. I didn't completely love the cut of her Armani Privé gown but it was glamorous and sexy." -- Mr. Mickey

"Yeah, the cut was a little funky. It felt like she was performing and someone ripped off a chunk of her dress -- sort of like the Janet Jackson-Justin Timberlake moment except Naomi didn't have any nip slip...or nipple piercing (presumably) for that matter." -- Abby 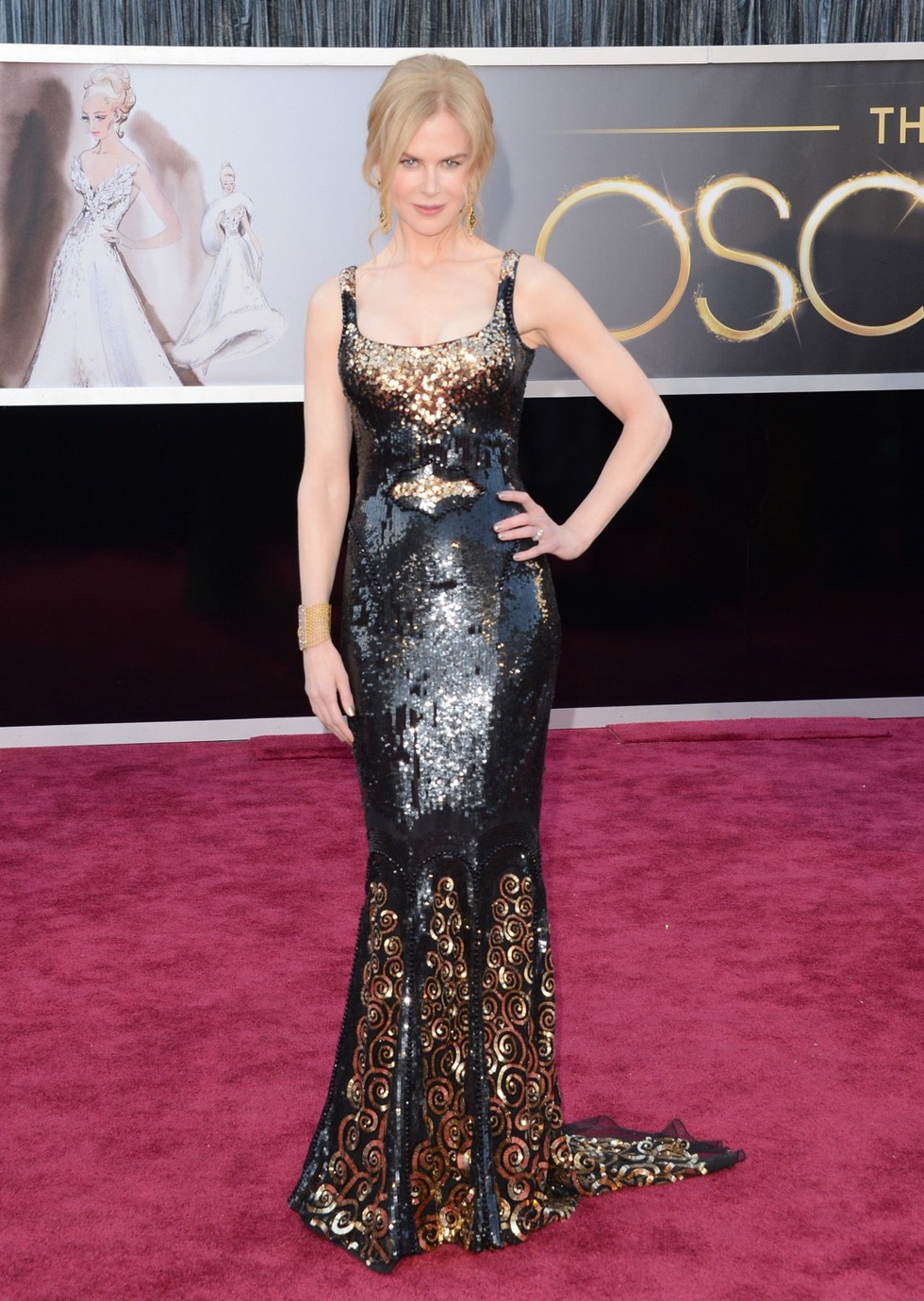 "Nicole looks like she's ready to make her debut on the Las Vegas strip. She'll be singing "Sparkling Diamonds" from Moulin Rouge all night long." -- Abby

"Face is better without the botox. Love the dress. The hair was a bit of a mess I thought." -- Mr. Mickey 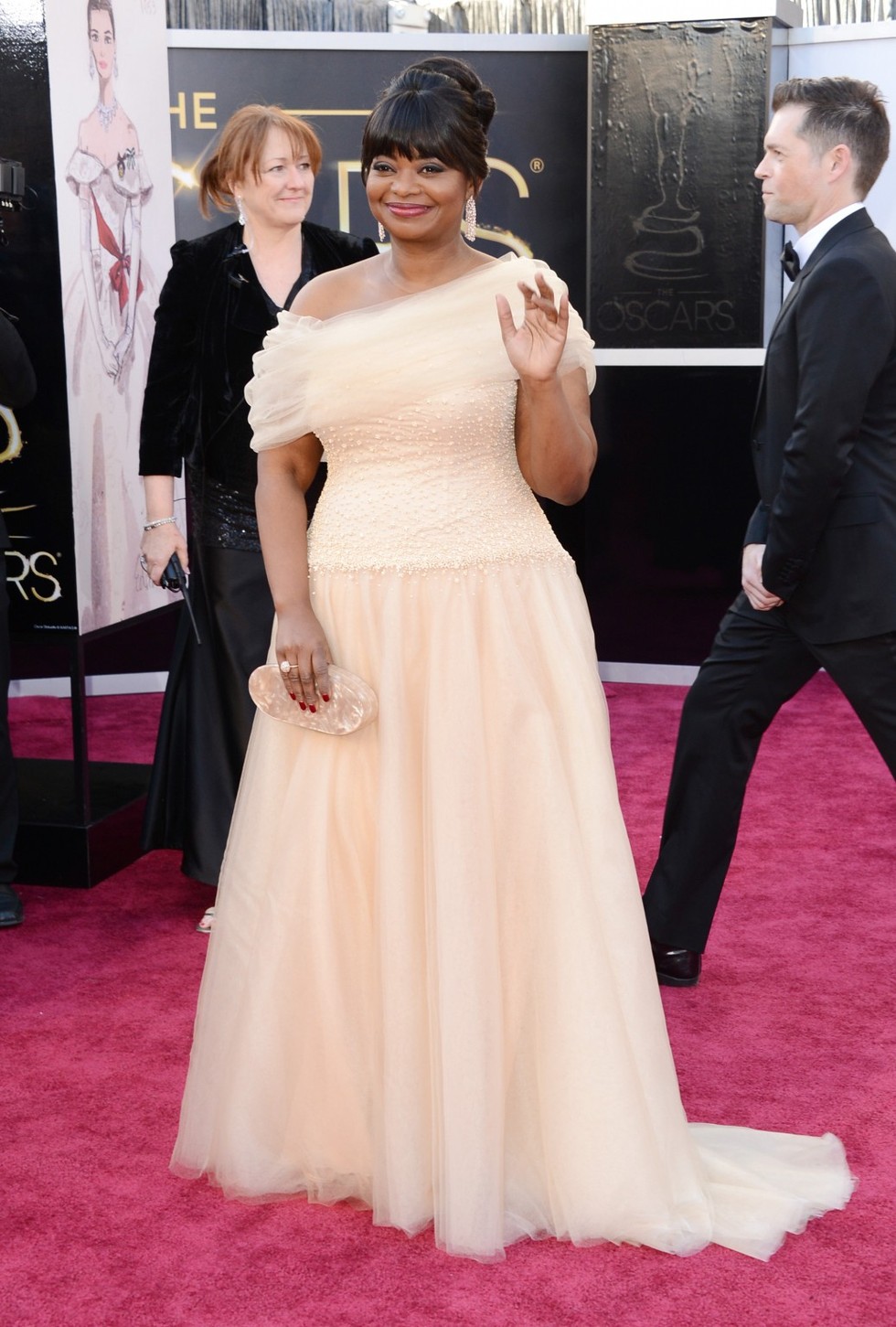 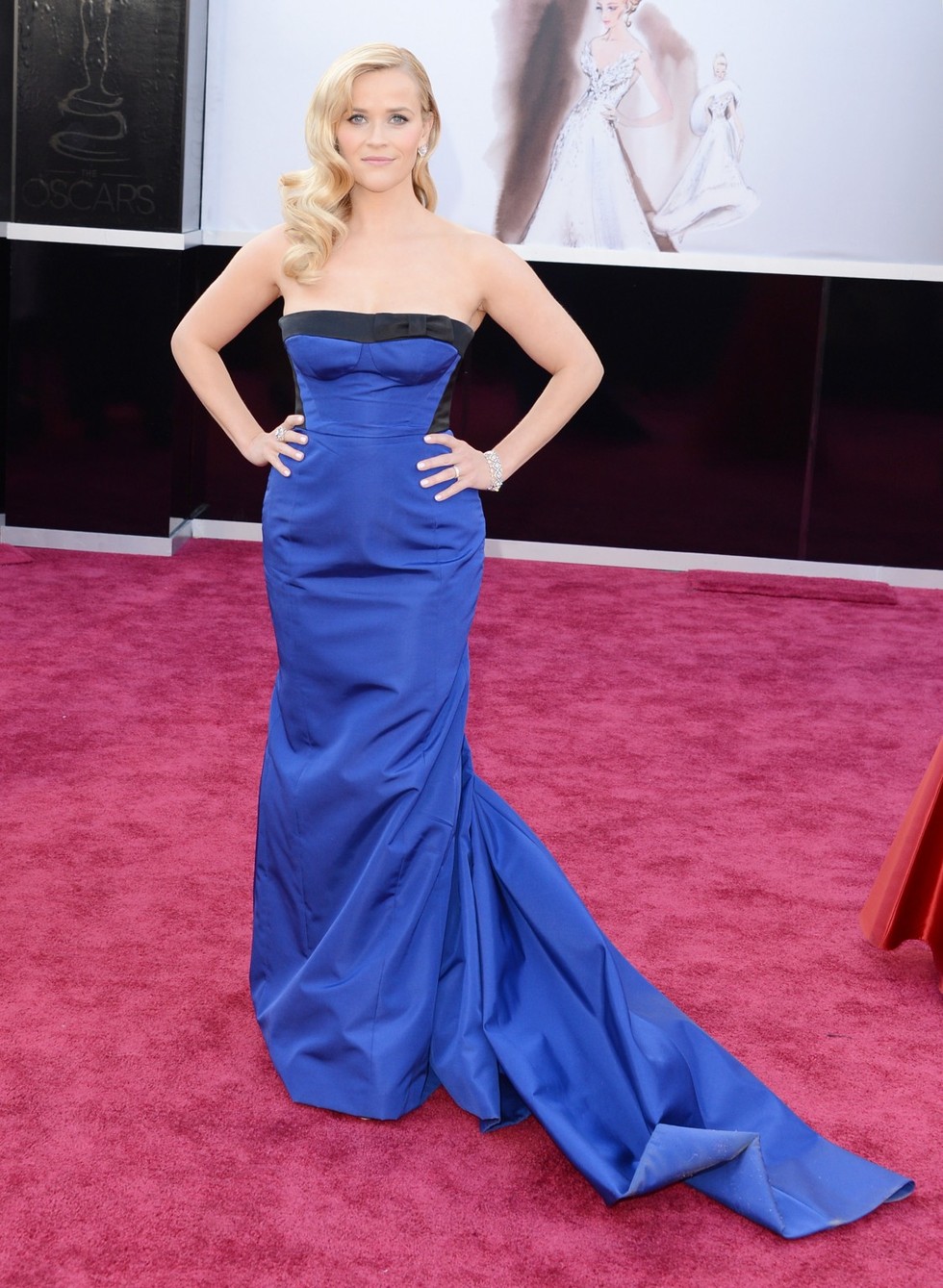 "Eh. Beautiful but snooze-y. Same hair, same type of dress as we saw on 80% of actresses during awards season." -- Abby 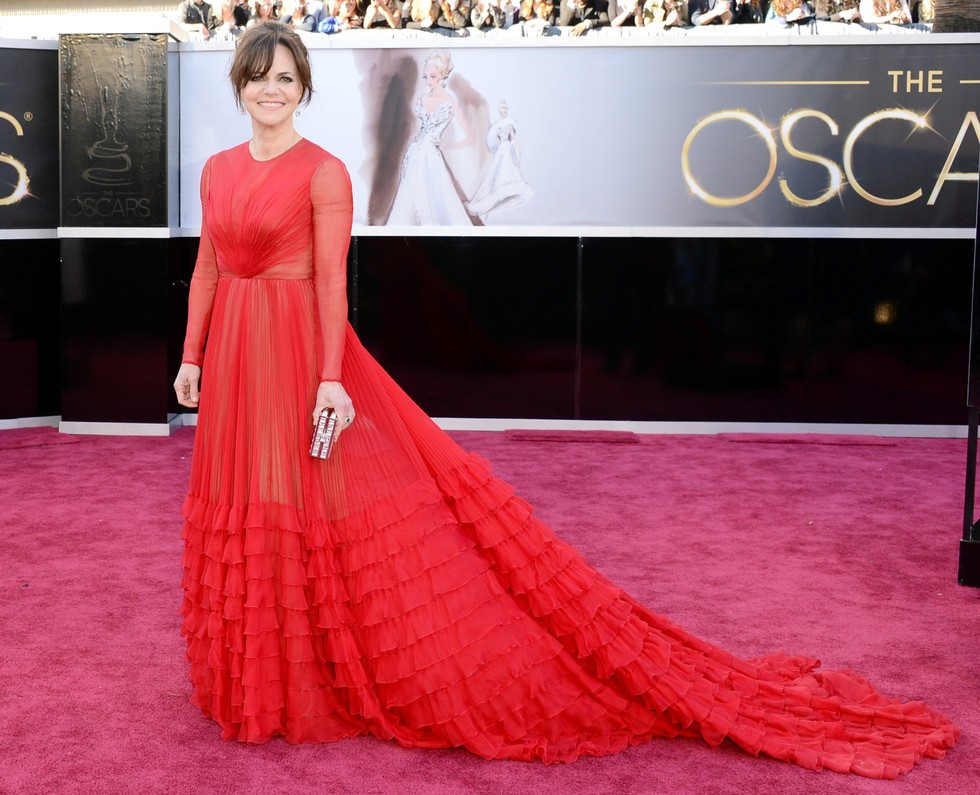 "A Hollywood legend. She looked fabulous in her Valentino. And wasn't she hilarious in her skit with Seth McFarlane?" -- Mr. Mickey 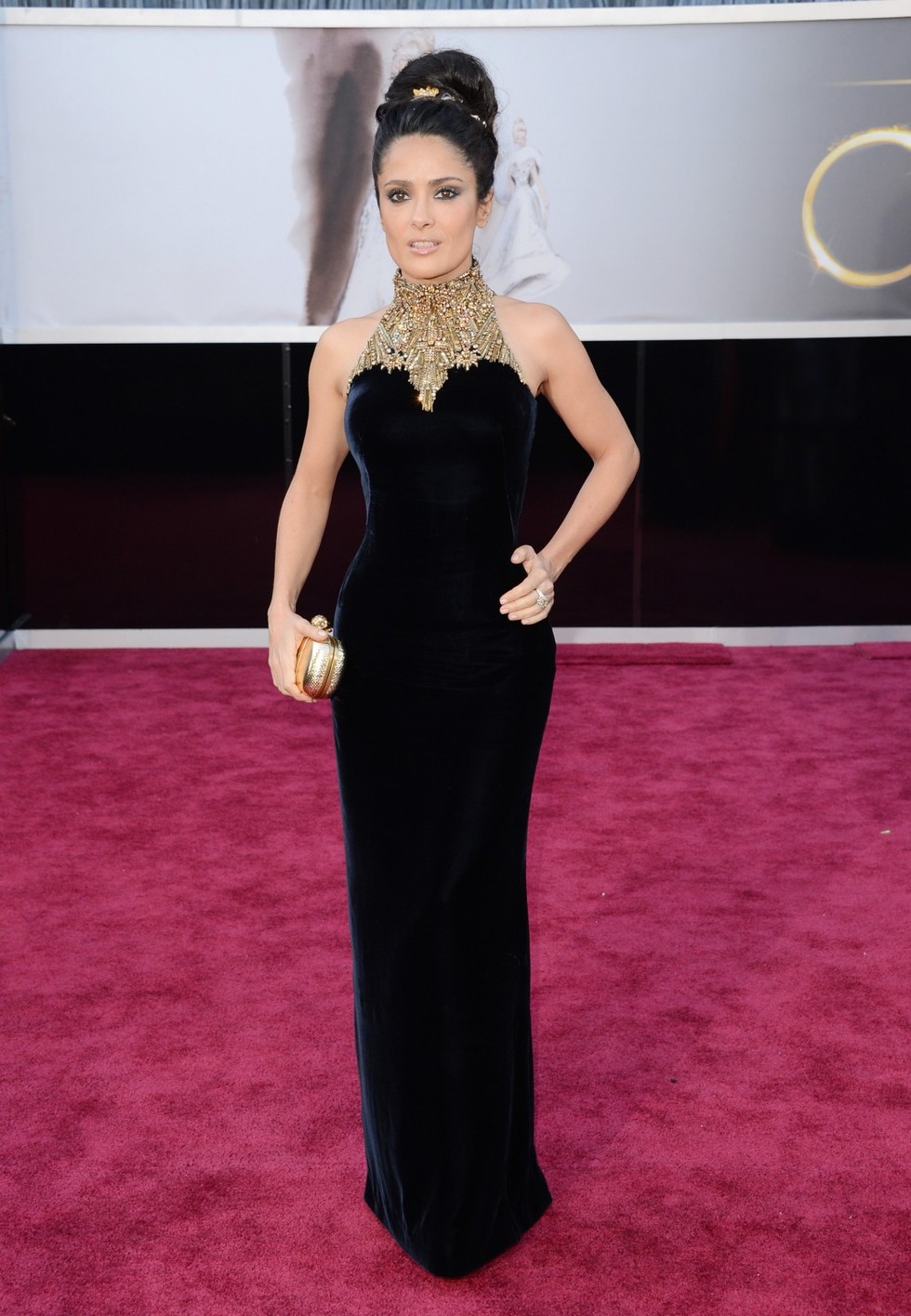 "I loved this gown and it just screamed 'I'm a famous actress married to the head of a luxury fashion conglomerate, bitch.' Right down to the tiara." -- Abby

"Always gorgeous. The hair wasn't as flawless as usual though." -- Mr. Mickey 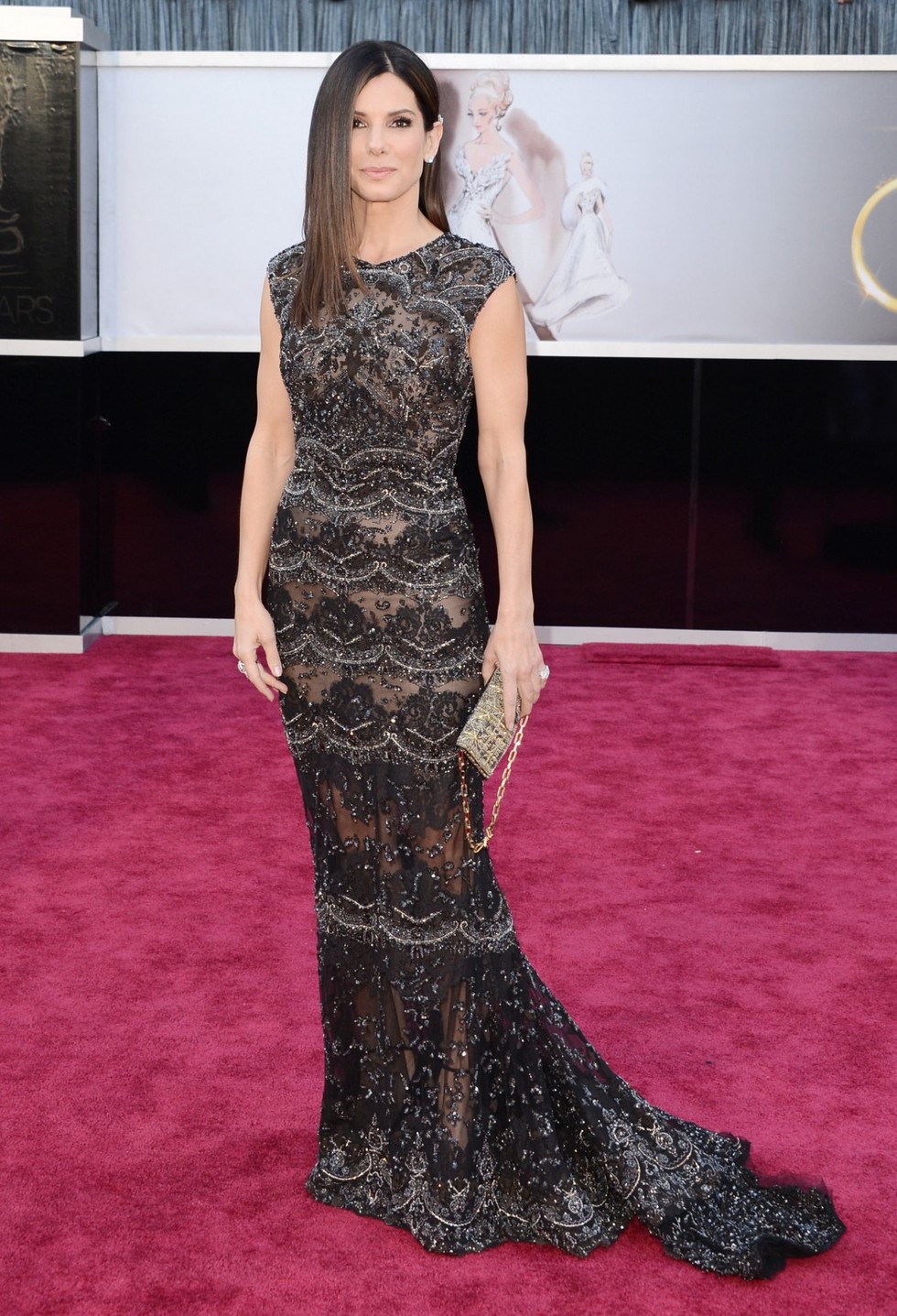 "I loved Sandra's dress -- it was actually one of my favorites of the night. I liked that she avoided strapless and it had just the right amount of sheerness to feel sexy but still ladylike and elegant." -- Abby

"Did Sandra get some weird face work? She looked strange to me. And the hair was off." -- Mr. Mickey