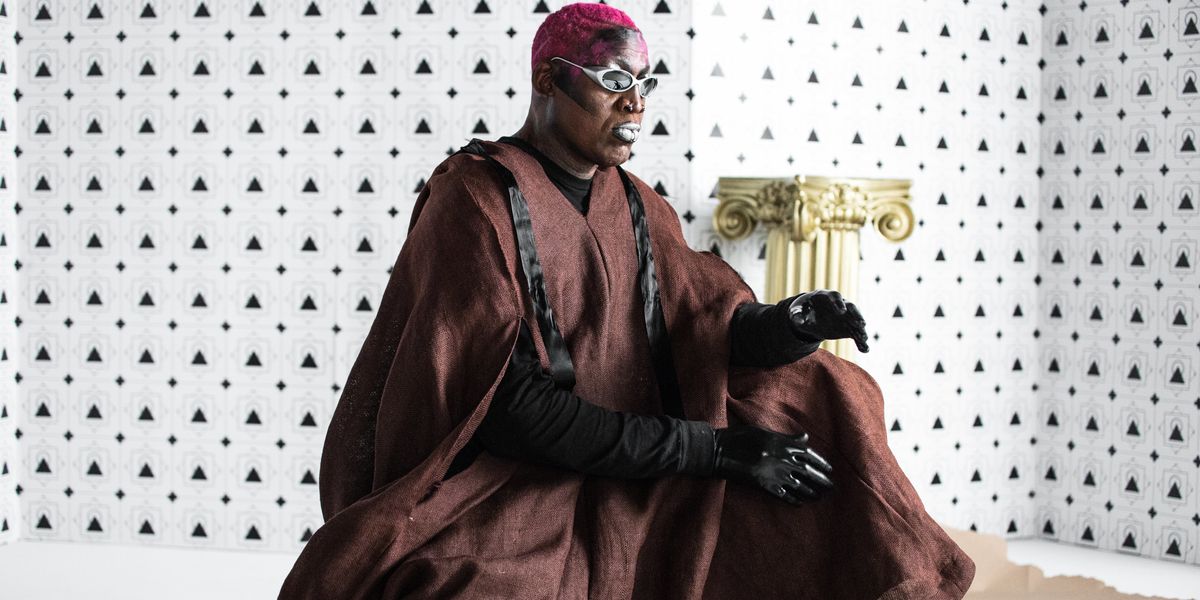 "To reach the Sacred Glacier, is to confront the enormous gleaming distraction obstructing you — greed, pride, anger, lust, sloth and gluttony — most of all it's what we stare at on our screens all day," Moose Knuckles says of their fall 2019 campaign. After watching the collection's short film, however, it's clear that the campaign is less about casual confrontation and more about an in-your-face, head-on assault of the senses — and Dennis Rodman. Welcome to a glam, icy hell worth sticking around for.

Inspired by the controversial 1973 cult classic, The Holy Mountain, which has basically become required art school viewing in the Gen Z era, "Sacred Glacier" is a glitch-heavy virtual acid trip. The campaign film brandishes the mantra, "Real Life Awaits," and transitions quickly from avant-garde scenes and sacrilegious imagery to the most stunning shots of Moose Knuckles' iconic outerwear, donned by models representing the seven deadly sins.

The guest of honor on the sins' journey to fashion enlightenment is perhaps the most jarring character in the campaign; Dennis Rodman plays a silvery lipstick-wearing prophet that terrorizes the group of sleek models. It's both post-Holy Mountain and post-Wes Anderson in its high-camp stylization and exaggerated silhouettes, but somehow still pretty. You're disturbed, yet seduced by the imagery — so 2019.

Produced by the prolific Toronto production house, Kid.Studio, "Sacred Glacier" is less about being disturbing, however, and more about provoking individuality outside the digital world. "To us, the film represents the purest forms of creativity, individuality, and freedom," Kid.Studio says of the campaign. "Dennis Rodman is an icon and legendary figure to us that represented these things and so much more."

The garments featured in "Sacred Glacier" are just as mysterious and otherworldly as the film — slicked latex-looking components on each piece seem to be as icy as the surrounding landscape. Panicked breaths in the film complement Moose Knuckles' constricting looks, while the more draped and structured garments match up with Rodman's anti-prophet persona.

This wild ride ultimately wants to get across the message that people need to "get off their fucking phones and live life," hence, "Real Life Awaits." The Moose Knuckles "Sacred Glacier" mantra is a hopeful one, implying that there's some passion in a post-digital world to be found, whether it be through meeting a prophetic Dennis Rodman on a mountain, or otherwise. It's also darkly upsetting, too, with a slight implication that "real life" might be too hyperreal. So fire up the burning pit of all your vices, dreams, and indulgences, and say goodbye to what's holding you back.