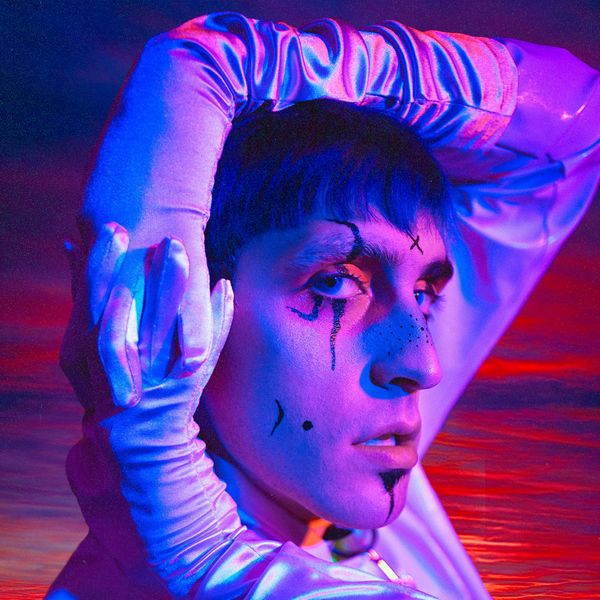 Matt Moen
31 July 2019
"As a kid I wanted to be a scientist when I grew up," says queer pop provocateur Mood Killer, and honestly, who didn't fantasize about mixing test tubes like the endearingly nerdy Bill Nye. Even though they aren't sequencing genomes, Mood Killer is sort of like pop's very own mad scientist. Perhaps less Bill Nye and more Dr. Strangelove, the longtime Dorian Electra collaborator's recently released debut EP, Liquify, manages to stitch together high intensity euro-dance synths with rubber squelches and lyrical non-sequiturs into an avant-garde pop Frankenstein that revels in its own sci-fi strangeness.

Mood Killer explains that the EP was "heavily influenced by some of my intellectual obsessions over the years, especially about sociology and the way our identities and realities are socially constructed." As a logical extension of this obsession, Mood Killer unsurprisingly found themselves revisiting their affinity for pop science books throughout the production process. So in order to celebrate the release of Liquify, Mood Killer decided to share some of their favorite pop science reads.

"Guns Germs and Steel: The Fates of Human Societies"

I got so obsessed with this book in college; I remember blowing through the 500 pages over spring break, it's a literal page turner. Basically Diamond tries to find out why white europeans were the ones to colonize the rest of the world. In doing so he destroys racist arguments for the superiority of "races." The West's success comes down the luck of geography and native, cultivatable plants/animals. Seeing it so simply explained gives good rationale to something (hopefully) obvious. It sounds heavy and cerebral, but I promise it's super digestible and fun.

"Sapiens: A Brief History of Humankind"

This is the one book I think everyone should read. In a similar way to "Guns, Germs, and Steel," it tackles the entirety of human history but in an even more all-encompassing and objective way. I remember literally LOLing at times at the sterile tone and how cut and dry Harari breaks down what we take for granted as "reality." Humans are social creatures and are unique in their ability to creative "inter-subjective realities," aka fictions believed to be true across a society. Stuff like money, nations, gender, religion, economic systems etc. are all just ideas and have no material basis in reality. The thesis of my EP is most clearly found here in my call to Liquify these social constructions for a moment to realize what is really real. Might seem heavy duty, but I promise it reads like a psychedelic thriller.

"Homo Deus" is the sequel of "Sapiens" (there's a third too that is also crazy good), but this time it tackles the future of humans. In order to do so it does go over our history a bit and dives deeper into some of the social deconstruction ideas from "Sapiens." Facing a future where the technology and biology converge we're forced to look at ideas of equality, liberalism, and free will that we take for granted to be true but in fact have no material basis in reality. This was truly one of the most shocking books I've ever read and it truly has completely altered the way I perceive my every day life.

"A Pre-History of the Cloud"

Tung-Hui Hu covers a lot of ground on this meditation on the history and physical reality of the omnipresent "cloud" that we all rely on for data storage. The apocalyptic imagery on the Liquify EP, especially in "Can't Wait" can be traced to this book. Hu talks of former nuclear bunkers housing vast, temperature controlled servers. They discuss the way our need to protect our future is actually contributing to the destruction of it, with cloud computing contributing a hefty 2% of world greenhouse gas emissions (as much as the aviation industry) and only increasing.

"The Social Construction of Reality" by Berger and Luckman

"Hyperspace: A Scientific Odyssey Through Parallel Universes, Time Warps, and the 10th Dimension" by Michio Kaku

"21 Lessons for the 21st Century" by Yuval Noah Harari

"The Omnivores Dilemma" by Michael Pollan

"How To Change Your Mind" by Michael Pollan