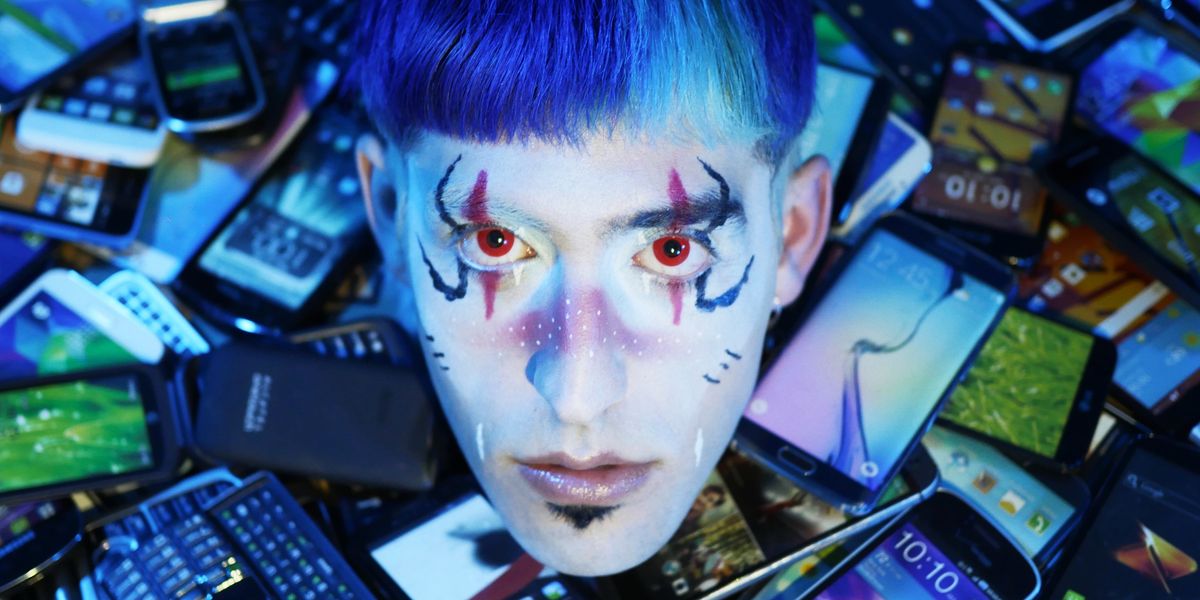 Mood Killer Is Your Cam Boy

On "Cam Boy," Mood Killer's second single off Liquify, the underground pop star wraps our online culture of viewer and viewed into a sex positive anthem for the queer community. "Put in your log in, get this body rocking," they sing (genius). "Don't need no talking, I'm just your Cam Boy."

While Mood Killer has personal experience camming, the track reflects a universal phenomenon for anyone with internet access. We all perform for an audience, manipulating our physical selves into an idealized online persona, and we also consume hundreds of people's performances at once. Scrolling, clicking, following, obsessing, desiring, loathing, sexualizing, fantasizing — the stigma against camming is widespread, yet it's become integral to our everyday lives.

The "Cam Boy" music video, directed by Mood Killer with creative production by Weston Allen and Dorian Electra, tells the story of a non-binary cybersex webcam model on a typical work day. They're submissive and dominant, performing and being performed for — a twisted concoction of role play that dissolves all notions of gender, status, or superiority. Mood Killer is all of the above, at one point wearing a webcam strap-on that doubles as commentary on the male gaze and heteronormative media gatekeepers.

Mood Killer's "Liquify" visual is just as provocative and complex, rallying the same production team to challenge our world as it exists today and propose a more elevated future. In it, Mood Killer gives a Ted Talk-style presentation, as images of religion, mathematics, and more flash behind them. "Amplify, simplify, deify, liquify," they list. "Testify, falsify, crucify, liquify." Their face is shown distorted and warped, stretching and thinning, before breaking into a Britney Spears-style dance routine. As always, their ambitious messages are disguised as flashy pop productions — the oldest, easiest means of infiltrating society.

Watch "Cam Boy," below, and pre-save Mood Killer's Liquify EP here ahead of its July 5th release. They'll be performing in New York on June 25th with Kitten and LPX at Elsewhere. Tickets are available, here.

"Cam Boy" is your most pop single to date, was this intentional? How does Mood Killer determine the success of a song?

To me a song works if it can evoke emotion and provoke thought, while making you want to scream and dance at the same time. I always have a big, heady, smart-guy, tangled knot of concepts but in the end none of that matters if it viscerally sucks. Pop music is designed to be visceral. I totally tried to make a pop song for "Cam Boy." For my past singles I thought I was making pop songs too, though. Pop music is one of the hardest art forms to pull off.

Have you ever been a cam boy?

I did camming in college, so it's definitely personal to my experience, but I also wanted it to represent something universal. The knowledge of being seen affects how we present ourselves day to day. Every choice we make about our image is made with a viewer in mind, whether it's our friends or strangers or an online community. So there's this really intense relationship between viewer and viewed, a feedback loop of projected desires. A webcam model's appearance and identity is shaped by and shapes the market. It makes me think about how selling my image on Instagram or as an artist isn't so different.

The ADD nature of the internet has made me self-actualize quickly and in a hundred different directions at once. Our personalities are not fixed things and I want people to be comfortable with the constant flux of identities and see it as empowering to make daily decisions about who they want to be.

Plus, I want to show how this system fits into the larger systems of our modern day capitalistic surveillance society. We know eyes are always watching whether it's grandma or Google or the government. A friend recently showed me this amazing meme that sums it up nicely: "in a surveillance state we are all cam girls."

"Cam Boy" follows "Liquify," both of which are included on your new EP. Looking at the project as whole, what sort of larger cultural statements do you think you're making?

The EP, which is also named Liquify, is a deconstructive pop record. It's heady and conceptual and all that, but it's also meant to be sexy music you can go hard to at the club. I spend my life fluctuating between a state of intense meta-cognition and a completely brainless bacchanalia, and I want that reflected in the EP.

So I'm liquifying social constructions, exploring queerness, identity, gender, the apocalypse, but I'm also indulging in the human pleasures of sex, dancing, and humor. Hopefully I strike the right balance. You probably want to pre-save that sucker here.

I'm obsessed with the strap-on webcam. What inspired this? Did you make it?

I did make this, with help from multi-media artist MJ Brotherton who was art director on the video. I'd been toying with this idea for a while. In college I got obsessed with Laura Mulvey's writings about what she coined as the "male gaze." According to her, all media is seen through the perspective of the heteronormative male since media creators have historically been men.

She describes the camera as a penis, penetrating and reducing women to their sexualized body parts. It's a visceral image that I thought needed some further queering and updating. I find the idea of this bionic genitalia peering back at the camming client is hilarious and kind of punk in a silly way. Plus, I just love wearing strap-ons as a part of my look to play with people's expectations of my gender.

"I spend my life fluctuating between a state of intense meta-cognition and a completely brainless bacchanalia."

What is Mood Killer's relationship with image? How do you think your looks help amplify your music, or complement the message?

Most people decide to listen to an artist because of how they look, they don't even know what they sound like yet. Images can say things a lot quicker than words. You can fully absorb a photo in a moment, but a song is a sequence of moments that you can only experience one at a time and then string together in your mind. I have a lot of fun figuring out how outfits and make-up and lighting can enhance the experience of my music.

Our relationship to images is constantly changing. Because of the internet we have more control than ever over how we're seen. It's leading to a lot of self-expression and self-actualization through avatars and identities. At the same time all those virtual spaces are shaped by and entangled in capitalism, racism, history, and misogyny, and so our identities are too. I want to keep creating and liquifying images in order to understand the way they intersect with the world. And hopefully make a bop while I'm at it.