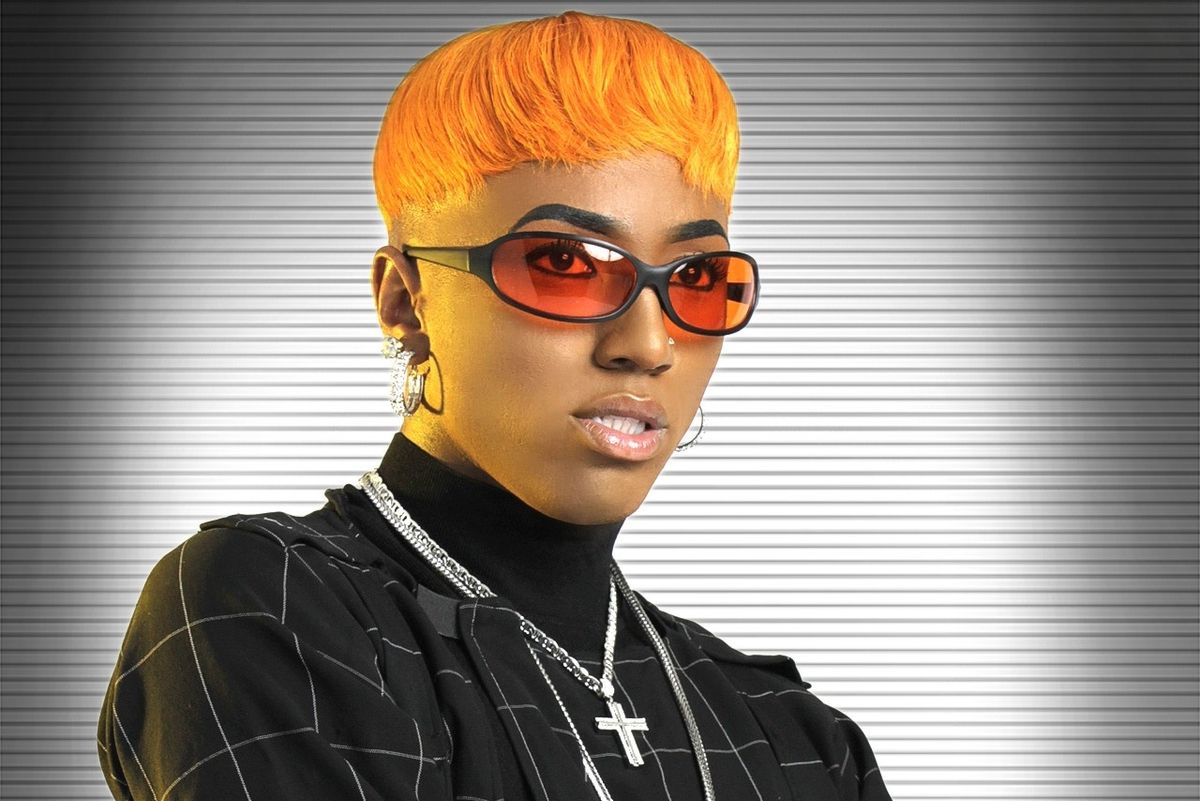 With a sherbert orange bowl cut, matching suit, fully beat face and stacks of gold chains, Montre' commanded the stage this month at Red Bull Music's ATL Is Burning Ball. "Fuck the makeup, bitch I got bars... wassup, who want it?" the rising performer teased his crowd, proudly calling himself "the Boy George of rap," before breaking into a scorching track that sampled Missy Elliott's 2002 hit "Work It." Backed by four dancers, Montre' exploded with star power that spread far beyond the Georgia Freight Depot. We may not have known we wanted him then, but we sure as hell do now.

The track itself is titled after the year Elliott released "Work It," paying homage to an era that Montre' cites as inspiration for the music he now creates today. It's lifted off a forthcoming mixtape, called Upfront, which the rapper plans to release in early 2019 and deliver a "classic hip-hop feel with a modern twist." Produced by Paradox, lead single "2002" recalls the tenacity of early aughts rap, as Montre' growls aggressively: "We in it to win it now/ Must be why they so mad." On the hook, Montre' repeats, "This beat feel like 2002," spotlighting a year when names like Lil' Kim and Busta Rhymes dominated rap.

After getting hooked at ATL Is Burning, PAPER caught up with Montre' to learn more about his background, and properly introduce him to the world through "2002." Below, we talk about growing up in Toledo, Ohio, Atlanta's queer music scene, and the power of androgyny in hip-hop.

Are you originally from Atlanta?

[I'm] originally from Toledo, Ohio, born and raised. It's a small town, and I knew the vision I had for myself was way too big for that town. So I continued to quietly fill my notebooks up with verses, hooks, and songs, and kept my vision mainly to myself. Once I got to the big city I was going to go head first into my music.

Coming from Atlanta, what POV do you think you're bringing to hip-hop?

I'm bringing back a lot of traditional hip-hop elements to the game that have been lost in this new world: stage presence, lyricism, creativity, originality, and passion. And to top it off I'm doing it with an androgynous style. But even though I'm androgynous, I don't claim to be a LGBT rapper, [I'm] a rapper who happens to be gay. I want to touch all stages and mics, and through being unapologetically me, I'll already be bridging the gap without putting myself in a box. You'll already know just by looking at me. I want to be considered like the Micheal Jackson or Prince of hip-hop; yes, they wore make-up, and they played with their masculine and feminine side but they were simply just amazing artists who created amazing music, as well as visual and performance art. It was undeniable and you had to respect it.

What do you think are some of the defining characteristics of Atlanta's queer music scene?

I look at the music scene as a whole, and if you're dope, you're dope no matter what scene you're in. I want the industry to not even look at gender or [sexual] preference, but instead the quality of what they are presenting. It shouldn't matter if you're gay, straight, black, or white — instead, is this person an amazing artist?

How did you develop your visual identity? Did you always have the confidence to present the way you do?

My style is an expression of all the things I love and admire. I've always loved the pop culture of the '80s, '90s, and early 2000s, so a lot of my inspirations still come from that. I also love Tokyo street fashion, the '80s and '90s ballroom scene, like Paris Is Burning; I love the club kids of the late '80s and early '90s. But then I also love Lil' Kim, Bad Boy, Missy Elliott, Busta Rhymes, wu-tang clan and so many more. My style is like a fusion of '80s and '90s NYC underground glam mixed with old school hip-hop, but then sometimes futuristic.

And yes, I've always had the same confidence to present like I do. The love I have for the things and people who have inspired me mean so much to me that all I care about is expressing it and that trumps any thought of caring what people think. When I get dressed and put together concepts and ideas, it's directly connected to how I'm feeling and what is inspiring me at that time. I want to be a legend and an icon one day, and you can't be scared of what people think.

"2002" is the first single off your new full-length mixtape. What can you tell us about it?

It's a full-length mixtape, and I'm so hype because this is the one. My first mixtape came out in 2015, and I have grown so much since then. Now I know so much more as far as writing, structuring songs, and presenting things; my style has grown, my voice has grown, and I've been through so much in my personal life — with balancing real life and also being an independent artist. So my songs are even more deep because I have even more stories to tell. This [mixtape] is showcasing more of my gritty, hip-hop side, but definitely still true to Montre' and more modern]. It has a real early 2000s hip-hop feel to it — literally just a classic. I hate saying 'mixtape' because the production is so good, and it's far from a mixtape. But I'm still in the stage where I'm building my fanbase, so I don't want to jeopardize that trying to charge for my music too soon. Besides, I do it for the love of the art-form first, so the biggest payment would be for people to take the time to listen to the music because it's so dope.

"I want to be a legend and an icon one day, and you can't be scared of what people think."

What's the story behind "2002"? It samples Missy Elliott's "Work It," which is amazing.

"2002" is so special to me, and I'm so excited for the world to hear this one, especially the dance world. During the production of my mixtape, I was like I need one more song that has a lot of energy — that's really hype. So I spent hours literally looking through so many beats online and just my luck I hit the one that is now 2002. I instantly knew this was a hit, and I couldn't wait to write to it. I had to sit on it for a couple of days because all my lyrics are tailor made to each beat, and I also had to make sure it was fire because it samples Missy Elliott's hit "Work It." I had to come correct and make sure I did it justice. Missy Elliott is definitely in my top five biggest inspirations; she also thrived in the decades I love and any time I can keep the essence of those times alive I love to. It was such an incredible time, a time we don't live in anymore; the industry has changed so much, there is no more passion, at least not in the mainstream. All the real artist are mostly underground, go figure.

How do you prep for your live performances? Your ATL Is Burning set was on fire.

It all starts with the music. I knew this was the first time I would be performing my new material, and I also knew this was a major performance. Once I pick my tracklist, it's time for rehearsal. Me and my dancers, who are also really close friends, rehearsed for two weeks. I knew it was gonna be an amazing show, but seeing the video footage I didn't realize how epic the choreography came out. No matter the size of the audience, I always perform like I'm at the VMAs or the Grammys. Live performances one of my favorite parts of being an artist.

Do you plan on staying in Atlanta with your music career?

No, I plan on moving to New York very soon. I like Atlanta and I've grown so much here, [but] New York is just more accepting and excited about artists like me. They celebrate it, versus in Atlanta they mostly tolerate it.

New mixtape Upfront by Montre' is slated for release early 2019.