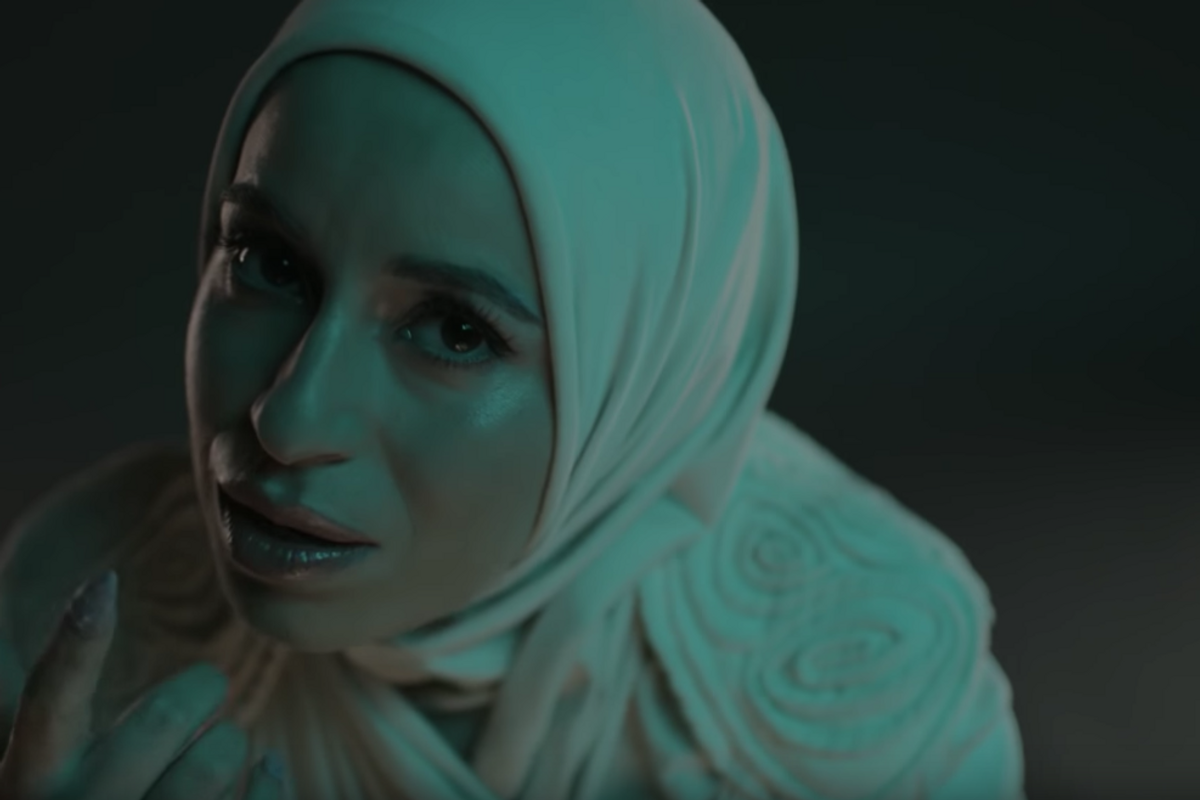 Mona Haydar Is a Force to Be Reckoned With

Mona Haydar has a slick, barbed flow; a Masters in Christian Ethics focusing on Empire, Colonization, White Supremacy and Ecology; 13 years under her belt as a performance poet; two children; a forthcoming EP and a lot to say.

The first generation American Muslim rapper, poet and activist first gained attention for her viral music video and track "Hijabi (Wrap My Hijab)," an intimate, Lemonade-esque video featuring Haydar eight months pregnant rapping about her pride in her identity, clapping back against Islamophobia and the backwards-feminist notions that a hijab is oppressive, alongside diverse chorus of Muslim women dancing, grooving, and expressing anger and joy together.

Shattering stereotypes and boundaries enforced by both American Islamophobia (at a time when hate crimes against Muslims are fluctuating around post-9/11 rates), conservative Muslims and liberal assimilation-focused respectability politics, Mona Haydar is a force to be reckoned with. Her presence in the music world is a radical act in itself — when so few Muslims, let alone Muslim women and Hijab-wearing Muslim women can be found on Spotify, on-stage or on-screen — but she's also explicit and unapologetic about her politics in her music. Each of her songs tackles issues of power, race and gender, with political nuance, poetic lyricism and indefatigable attitude. While her music is explicitly political, it's also tightly crafted and impeccably catchy, mixing Arab pop and folk sounds with hip-hop and pop beats, drawing from both iconic Arab performers like Um Kulthoum, Fayrouz and AbdelHaim Hafiz, as well as American artists as diverse as Princess Nokia, J. Cole, Prince, Jimi Hendrix, The Black Keys and Thelonious Monk.

Haydar navigates the particularly treacherous territory of commbatting Islamophobia in her music, while addressing issues internal to the Muslim community. This is a double bind she addressed on her follow-up to "Hijabi," "Dog ft. Jackie Cruz," which explores the sexist criticism she received from Muslim and non-Muslim men alike following her breakout, flawlessly tearing down panel's on women featuring only men — and prescribing both therapy and exorcisms for lame sexist dudes.

Now, Mona Haydar has returned with "Suicide Doors (ft. Drea D'Nur)." The fierce track and video express reckons with Haydar's loss of a close friend to suicide. Haydar channels her grief, regret and anger into the tight, melodic flow, backed by Drea D'Nur's atomic vocals, as the two women shoulder their pain together in the heartbreakingly lovely black, white and blue-toned video.

PAPER sat down Haydar to talk about her transformation from poet to MC, mental health, political intersectionality and her forthcoming EP Barbarican.

The video brought tears to my eyes. It's not common that we hear women with your experience and perspective speaking about these things, but also the concept of suicide is so taboo. As discussions around mental health open up, what prompted you to tackle this through your art?

It wasn't a choice I made as an artist, I think concepts and ideas come to you and for me, it was sort of like, shit do I really have to do this one? I felt compelled, I lost a very very dear friend almost six years ago and I think I changed my life so radically. I ended up leaving my life in Flint, Michigan and moving to the top of a mountain with no running water and solar energy. It just shifted everything for me and I was like, why doesn't anyone talk about this? It changed my life.

I'm always looking for nuance and double meaning — the idea of suicide doors, a car metaphor also in a way speaks to the ways in which there is industry glamorization and obsession with death and things ending. In a weird way, it felt like a commentary to that. Would I be wrong if I assumed that?

No, you wouldn't. There is so much in the song that has been a part of my experience and my life. After my friend passed away I asked myself, Am I going to start living? Or am I going to stop the way that my friend did? Just being faced with that question and also knowing that my art was shifting and transforming was scary. I was moving from poetry into being an MC and that shift was terrifying. The music industry, I have so many criticisms of it and yet I was joining it and coming into it knowing that there is an objectification of women and over-sexualization and the radicalism of the bodies of certain people, genders, classes and certain races of people — all of that contributed to songs. I grew up in Flint, so I constantly heard stuff like, "Oh she's too dark — she's too Black," and I remember just being like, what world do we live in? This is still the conversation that we are having, and waking up to the fact that I am joining this machine that is pitching this out into the world.

You made the song "Hijabi," which I read was also declared one of the best feminist anthems of all time — and I've heard it and I agree. In your bio, you say that there is sacred activism to your work. I want to hear what you mean by that, by carrying these messages and important conversations through your work?

The sacred aspect is hard for some people because they are like "I'm not religious, I don't believe in God, I don't believe in spirit," and for me that's peace — it's not really about some dude in the sky. It really is just about finding that source of love in your life and amplifying it and making it big and beautiful and overflowing for everyone around you. So that's what I mean by sacred. It's just about creating greater beauty and love and generosity in the world. When I was at the sacred camp in Standing Rock, I was seven months pregnant with my second baby and this woman came up to me and laid her hands on my belly. She said, "You are doing that real sacred work, you brought the medicine with you." To just talk about pregnancy as medicine, to talk about pregnancy as sacred, gives you a sense of what I mean by sacred — that's what I mean, by being your fullest, most authentic self and just doing the work of being human.

That feels so radical considering the time we are in now. You are Syrian-American, so I'm sure you are relating to what is going on now. It feels radical to still find places to be loving and authentic and have a sense a pride, when there is often a greater voice telling us not to. How are you feeling about what is going on and how you are using your art to combat that?

One of my major goals has been to say that we are going to turn up and have a good time in spite of those who hate us, in spite of those who don't want us around, in spite of the oppression, in spite of all it, we're going to live out loud, with joy and love. It's hard to do that when you have so much pressure on your community, with the Arab community being so disproportionately surveilled compared to other communities — the black community experiencing similar surveillance in their communities. It's just crazy to me that people don't know about stuff like that. They don't know that after 911, basically, every Muslim and Arab community started being surveilled indiscriminately and that patriot acts allowed for that.

That completely erases the genocide of the native people, so that goes back to my whole thing about everything being connected and in spite of all that we're going to listen to good music, we're going to make good music and have a good time. We're going to create music that allows us to sing together, to dance together and be together and just live. There are people out there who don't want us to just live.

"It really is just about finding that source of love in your life and amplifying it and making it big and beautiful and overflowing for everyone around you."

I feel like there is a lot of hope in your message, as well. I am assuming that you are in the process of making a full-length record for this?

Yeah, I am writing the full-length record currently but just wrapped on my EP — which is five songs and it deals with all of these topics. One of the songs is called "Lifted," and it's about lifting each other up, literally: "I can lift you out of your pain/ Baby if you let me take the pain away." We are stronger and more beautiful if we join together and carry these burdens together. I feel like "Suicide Doors" is saying that because when someone comes to me with feelings that they want to hurt themselves, often the feeling that is connected to that is isolation. They don't feel connected. They feel alone. Suicide prevention is just a good ass conversation and making someone feel heard in a world that makes them feel so alone. The EP is a way for me to talk about connection and love. The EP is called Barbarican — it's a play on American, Puerto Rican, African, but we are others so we are Barbaricans. It's just a way to say, "We're here and we're going to turn up and enjoy life and talk about our pain, struggles, and traumas."

Would you say that you hope this record inspires people to want to do that?

Yeah, my favorite thing growing up was listening parties, where a new album would come out you would all get together and listen to every track together. Even though no one would be talking, you would all just be there listening. There's something about doing nothing, being silent and listening to an album together. I hope that people feel that it's something that can bring them together — something that is for everyone. This is something people can just enjoy on more than just a superficial level, they can enjoy the lyricism and the hidden meanings. There is some meta-commentary in there; I've included some stuff where if you don't follow me closely, you probably won't understand. Some people won't understand certain things unless they are a "friend," and I just love that. It's definitely me and my community and where I come from — all my intersectional identities getting together to tell the beginning of a story.