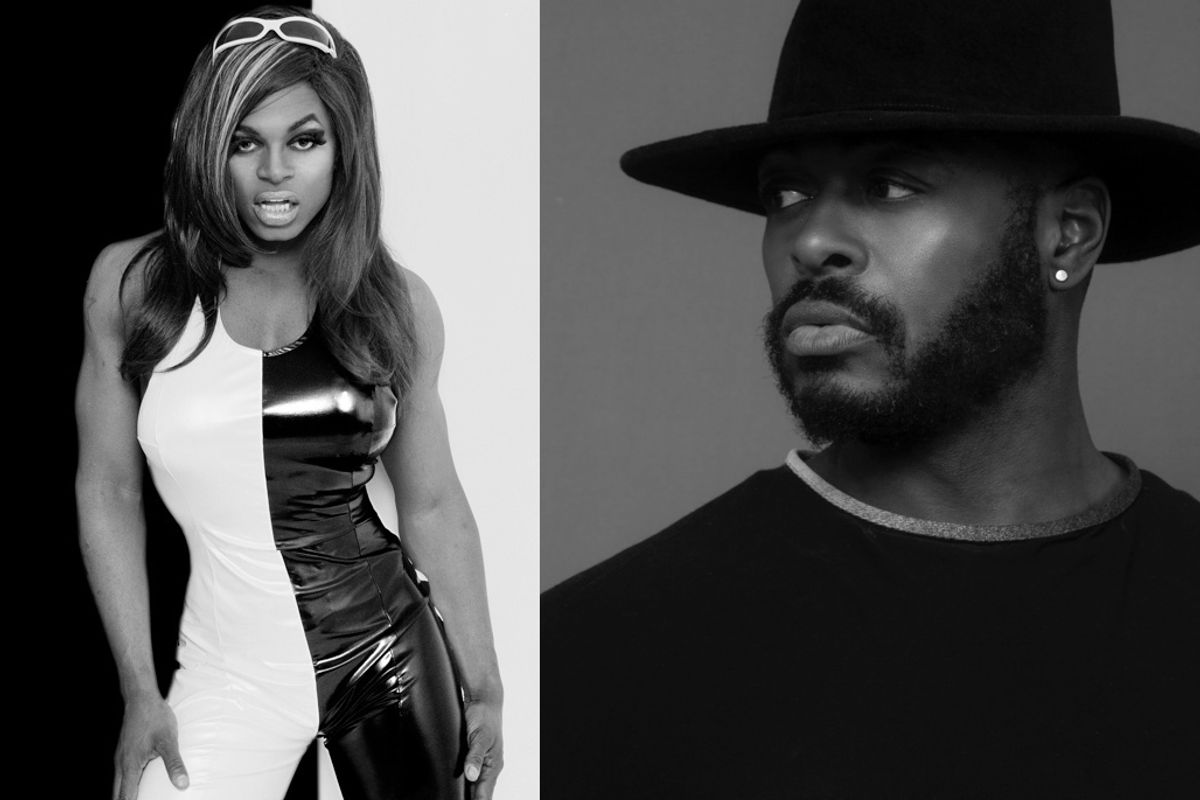 Ex-Drag Queen Nashom Wooden, aka Mona Foot, on Hanging Up the Heels

Starting in 1989, Brooklyn-born Nashom Wooden found success as a drag performer until finding it a bit of a drag. Nashom was Mona Foot, the quick-witted diva at the St. Marks Place boîte the Boy Bar, until hanging up the heels to pursue other ventures. Nashom is also well known as having been one of the Ones [a dance-pop trio that started in '99] and also a club worker and scene maker who's always interesting to talk to. Here's our chat about his evolution from tucking to "tripping over dicks."

Hi, Nashom. What were your aspirations as a kid?

How did you eventually get into the NYC nightlife scene?

Do you remember [club kid] Magenta?

He and I became friends. I hitched myself to his wagon and started going to the Tunnel when I was 15 or 16. Around the same time, I had met Nikki Nicole—Nicholas Carter—who was the first black Miss Boy Bar. We worked at a clothing store called Zoot on Waverly, down the street from Unique Clothing Warehouse and Antiques Boutique. While at work, during the down time, we'd lip-sync to songs to entertain ourselves. That went on for a long time, and it was really fun. We were both really good at it. He had a show at the Boy Bar. I had left that store to work at Charivari, but he and I remained friends. I went to see his show and he knew I enjoyed lip-synching. He dared me to do a performance. Having just left home, I needed money and work, plus I craved attention desperately. I did it and was kind of a hit immediately. I met [Boy Bar impresario] Matthew Kasten, and it steamrolled to what it became. I wanted to be a rock star — I never wanted to be a woman or dress up like a girl. It's just what happened.

Were you Mona Foot from the beginning?

I was Mona. At the time, that show Who's the Boss? was on, and Katherine Helmond's character Mona was too much for me. I loved her. One day, Mathew, when introducing me, threw in the "Foot" and back then, I was billed as daughter of [drag star] Glamamore because my lip-sync was so tight. I was only doing Aretha Franklin back then. Of the Boy Bar Beauties, Princess Diandra was ruling, and she was mostly doing Diana Ross, and I thought, "I want to be like her. Focus on one character and nail it."

When did you expand beyond just Aretha?

Boy Bar closed a couple of times and reopened. I was no longer sort of under Matthew's wing. He liked me being the chubby girl and the big girl who was not necessarily pretty.

I thought Mona was gorgeous.

I thought so too. But there were a lot of rough edges. The makeup got better. I was just a boy trying to do makeup. I didn't know what the fuck I was doing, and it showed. He liked that.

I liked the fact that as Mona, you had big muscly arms sticking out.

I've been an athlete in high school. Yeah, I think that's one thing people liked about it.

But no one mentored you as far as how to do makeup?

The girls weren't all that welcoming at first. I stood out to them. No one took me under their wing. I learned makeup from RuPaul. We did a show off-Broadway called My Pet Homo and she taught me a few things. It ran a few weeks, somewhere on Seventh Street. It was a ridiculous play about two alien women who capture a homosexual human on their planet, and they worship Sylvester. It was sometime in the early '90s — most of those files are deleted or corrupted. [laughs]

Mona was sassy and funny, but was she ever mean?

The way I remember it, I never tried to hurt anyone's feelings, but if I was trying to read you, I'd find a way to get my point across without hurting you, and maybe you'd laugh too.

Was it intoxicating to become popular as Mona?

At first it was. I really became intoxicated once I did Wonder Woman at Union Square Park. I could see the power of it. No one saw that coming. To be not only a superhero, to be black and a man. I didn't realize at the time I was feminine. The message was so powerful, performing "I'm Every Woman" as Wonder Woman. Then Star Search came along. [Chelsea dance club] Crobar approached me to do a night there. They could tell I was a popular queen. They asked if I had a concept. I came up with Star Search — it was catchy and familiar. I certainly did not invent contest shows, but using the name Star Search spoke to people. Familiarity is everything.

It was tough at first—to hold a mic and keep an audience's attention — but eventually I got the hang of it. At one point, I was doing it twice a week — at Crobar and Barracuda. I was in drag so much that I was losing my mind. Towards the end, I became miserable because it wasn't my dream to be some downtown nightlife drag queen superstar. It seemed like it was out of my control. I was making so much money and losing myself in the character. No matter how much I introduced myself as Nashom, people called me Mona. They still do and I don't love it. Any member of the trans community — I know many of them by their birth names their parents gave them. If I called them by their male name, I'd be vilified. But I don't get the same respect. Just call me what I want to be called.

They probably mean it affectionately, but it's still wrong.

It comes from a good place and no one gets read. They mean well. I don't love it, but I grin and bear it.

What are the other pitfalls of having been Mona?

Sometimes guys that were interested in me as Nashom would figure out the Mona thing and get a little freaked out. They'd think that was what I was going to bring to the bedroom, which wasn't the case. Also, tucking wasn't fun. And the amount of drinking I did was legendary because I was in so much pain between my feet and my corset. I had to drink obscene amounts just to get through it. I'd get home and sit down on my bed — just for a minute, before taking anything off—and before you know, it would be the next morning and I'd slept in drag with my corset on. Talk about a rude awakening. There's nothing worse than that.

So Mona became oppressive to you?

The character takes over, and I could see why someone would want to be like this the whole time. But I wasn't an awkward boy. I was not a wallflower in high school. I was super popular. I could see how someone could get drunk on the attention if they were an awkward boy who got teased in school. But that wasn't me. That's why I kept my name Nashom. If I'm Mona, I'm no longer me.

You were confident as a guy and didn't need Mona to escape into the way some other drag performers did. You just wanted to perform, right?

I just wanted to perform! It was an outlet for me and I used it. I never wanted to sing in drag. Eventually, when that movie Flawless came, I hemmed and hawed about whether I should do it because it would make me get stuck. But the characters were in and out of drag, and that's what made it appealing. When [director] Joel Schumacher said we could submit songs, that was an opportunity to turn it into something else.

I wrote these lyrics for "Flawless", contacted Paul Alexander, who had made a million records at that time, and he contributed lyrics. The music was written by this production team called A Touch of Class. That was in 1999. That's how our group the Ones [Nashom, Paul, and JoJo Americo] got formed. We'd done gigs at Squeezebox, but not as the Ones. With "Flawless," it looked like it was gonna take off. You had even written about us.

For the Ones, you did a sort of male but sci-fi look, right?

I looked at it as an opportunity to put the drag away, but being always into sci-fi and superheroes, it wasn't too far a leap to throw on a mohawk and maybe a little bit of makeup and be a rock star. Working with JoJo and Paul, I certainly couldn't do preppie.

When did you retire Mona?

It just kind of fizzled out. I stopped taking gigs. And Faggoty Feud [game show at Barracuda] was over.

Did you ever do that with Rue McClanahan?

I did it with Rue. I was pretty drunk that night, but it was OK. I don't remember her being funnier than me. She definitely had a draw.

I think she was better with a script.

Yes. And I was better off the cuff.

When did you start working at the Cock?

In 1997. The owner and I have been friends forever. [Club producer] Mario Diaz asked if I would work there and I said yes. I'm mostly a bartender there. I do door on Wednesday, and I bartend on Fridays and sometimes Saturdays, and I DJ on Sundays. I wear many hats. I don't love doing the door. I like busy work. Bartending allows me to run around and be busy and flirt with people and be charming.

And at the door, some people still call you Mona. Does it piss you off?

There's probably new generations who might not know about the Boy Bar or the Ones.

A lot of people don't know anything about me.

At least they won't call you Mona. What else are you working on these days?

I'm still writing music and I'm working on a documentary film, either about me or the Ones, with my friend Aaron Cobbett. It'll probably be about the Ones because there's so much footage. Also, I wrote a treatment for a sitcom and I pitched it to a friend who's television producer.

You've got to get Katherine Helmond to star in it! The gay dating scene has changed so much since the '90s. How do you fare with it?

I am tripping over dicks. I don't know, man, I'm on the apps and they work for me. It's the truth. I'm not gonna even lie. Guys don't approach me in person. They never have. People tell me I'm intimidating. But on the apps, they do!!!