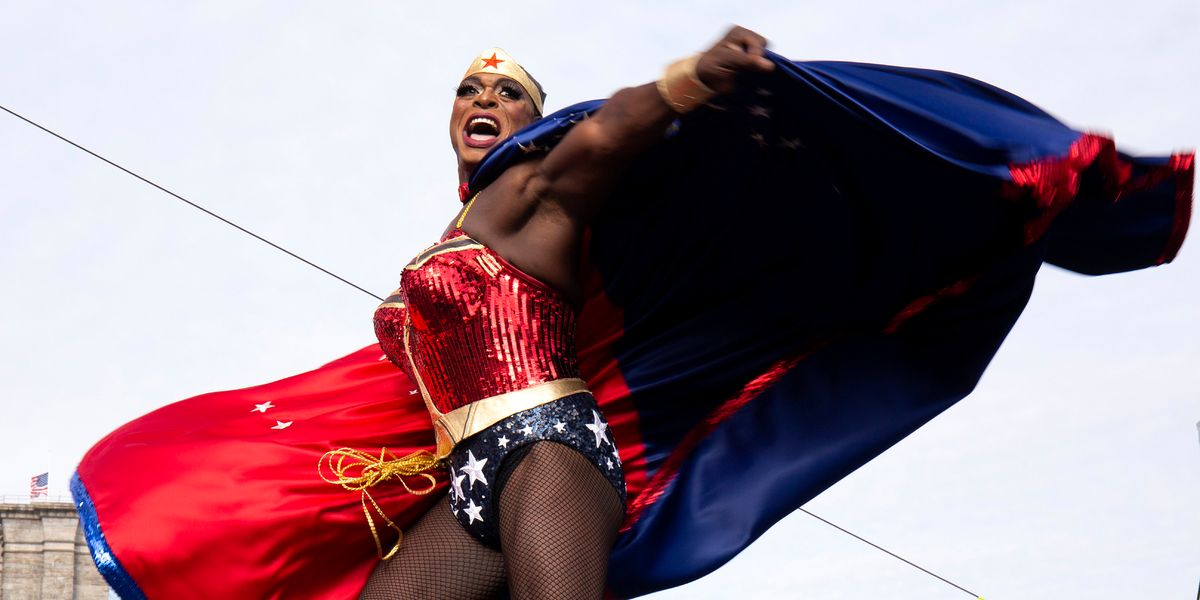 Nashom Wooden, downtown legend and performer, has died of COVID-19 in NYC.

Wooden was born in Brooklyn and started doing drag in 1989. His alter ego, Mona Foot, became a superstar, known for squeezing his muscle-bound physique into sexy dresses and lip synching to songs like "I'm Every Woman." Mona's signature Wonder Woman number always brought the house down at Wigstock, the long-running seminal yearly drag festival hosted by Lady Bunny. Wooden would perform to the '70s TV show theme song in a strapless superhero ensemble, decades ahead of Gal Gadot's current Wonder Woman franchise.

In a 2017 interview for PAPER, Wooden told journalist Michael Musto, "I really became intoxicated once I did Wonder Woman at Union Square Park. I could see the power of it. No one saw that coming. To be not only a superhero, to be Black and a man. I didn't realize at the time I was feminine. The message was so powerful, performing 'I'm Every Woman' as Wonder Woman."

Related | Ex-Drag Queen Nashom Wooden on Hanging Up the Heels

Wooden's life looks like a history lesson in fabulous downtown culture. He worked as a salesboy at Charivari, the groundbreaking designer fashion chain of stores where Marc Jacobs folded t-shirts as a teen. He later also worked at Pat Field, the eponymous boutique of Sex & the City stylist Patricia Field. He first performed in drag at Boy Bar, a gay bar and drag spot on St. Mark's Place famed for their gorgeous Boy Bar Beauties like Miss Guy, Connie Girl, Princess Diandra and Raven O. He did an off-Broadway show, My Pet Homo, with RuPaul. He was cast in Joel Schumacher's 1999 film, Flawless, and co-wrote the title song with his group, The Ones. It was a worldwide dance hit.

Since 1997, Wooden had been working as bartender, doorman and DJ at the Cock, the quintessential East Village gay dive bar. Wigstock Co-Founder Scott Lifshutz ran into Wooden on the street a month ago and says Wooden was happy and enthusiastic. "He was really upbeat and optimistic," Lifshutz says. "He said he was almost finished writing a screenplay for TV. He was still working at the Cock and he was doing well."

Musto adds, "Mona was a fierce drag warrior with a great lip synch and a wonderfully wicked mouth. She was admired and loved on the drag scene."