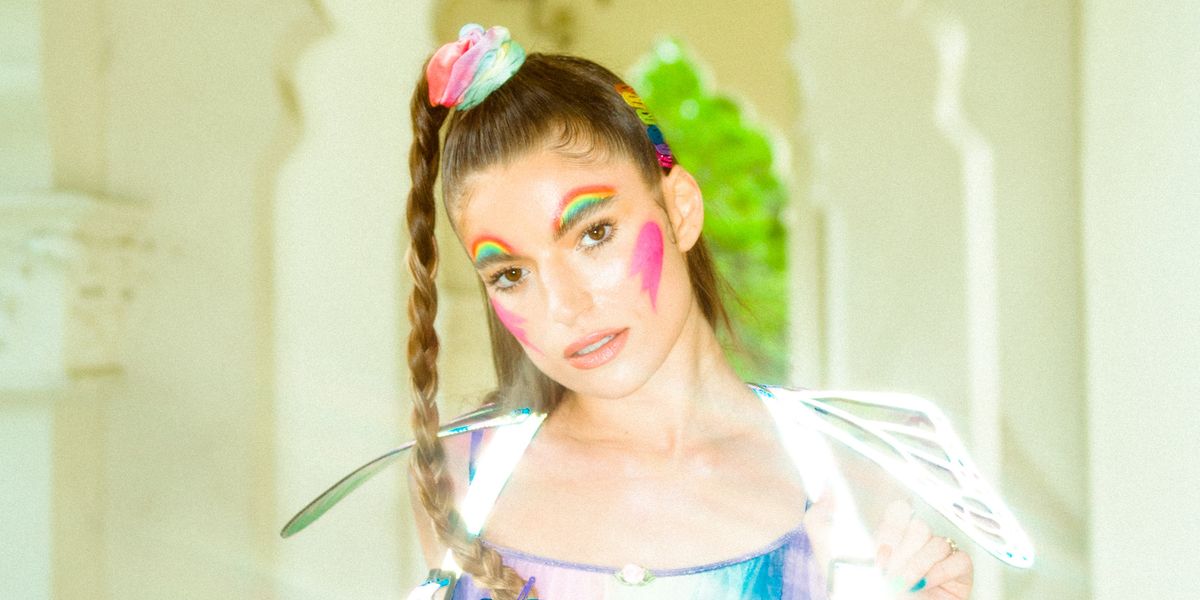 Molly Moore Is More Than a 'Voice on the Internet'

Molly Moore was seven years old when she wrote her first poem — a step into writing inspired by the challenges she faced watching her sister fight with her parents. Her dad sat her down then, teaching her how to write a song with just a guitar and the desire to create new melodies.

While Moore, now 28, didn't become a full-time musician until five years ago, she isn't one for slowing down her creative process when ideas start flowing. But the start of the pandemic earlier this year gave her some much-needed space to breathe outside her typical world. Like most people adjusting to COVID, there were elements introduced to her workflow — and fortunately for Moore, the revamp was meaningful and productive.

"I never did Zoom sessions before COVID, so that's definitely an addition to my creative process," Moore said. "But it's changed my process in the fact that I don't write as frequently as I was writing before. I was really working on this first album and doing a ton of sessions, just writing tons of songs up until quarantine. So once it hit, I was like, 'Okay, I have a lot of stuff to finish. I'm good for a second.' I'm glad I went that hard when I did."

And the adjustment period to Moore's new normal seems to have paid off, because Moore's debut album, Voice on the Internet, dropped today.

For Moore, being a Voice on the Internet is about more than sending a tweet. Rather, the name was inspired by a desire to speak on her turbulent relationship with the internet: Online identity discovery, safety concerns and the need to have "real conversations," which Moore calls the bare minimum to expect from the worldwide web.

The song came first, but the meaning of the track's title made it the most sentimental — and fitting — choice to become the album's title, as well.

"As soon as I wrote it, I was like, 'This is probably going to be my album title,'" Moore said. "Because every time I got in the studio, I was writing a version of that song. It was coming into different parts of it, the technology aspect of it and not being able to stop looking at someone's stuff and having them look at yours and all the different 2020 things that happen that really suck when you're trying to get over someone. And you're like, 'Goddammit, what the fuck? Why are you hitting me up?'"

But Voice on the Internet isn't just a break-up album, though she did turn a tumultuous year into a bad bitch narrative for the books. Moore's debut is inspired by songwriters and vocalists that span across styles, from Audrey Nuna to Still Woozy and Otis Redding, creating a multi-genre work that showcases Moore's ability to attach her strong vocals to practically any sound. The 20 tracks venture through soft pop, smooth R&B, quirky interludes and even a Britney Spears cover.

But Moore says her debut doesn't necessarily speak to the artist she is today. Instead, she considers it an "accurate reflection" of Moore then, who undoubtedly shaped Moore now.

"It's definitely who I was over the last year, more towards the beginning of last year," Moore said. "I've had to make peace with that; my first album is a little bit angrier than I am now. Some of these emotions are not so prevalent anymore, which is nice. Thank God, that was a rough run there for a minute. But I still struggle with a lot of the things I was struggling with when I made it."

Moore continued, "I was in a five-year relationship; it was a really long time and I was really set on that being my life. I'd subscribed to that life and I just didn't know how I could see another future for myself. I think that I've grown a lot just from being alone and addressing who I am."

Moore's break-up that inspired much of Voice on the Internet wasn't just a personal one, but a musical divergence, too. The other half of Moore's relationship was also the second piece of the duo, Cosmos & Creature, which she says taught her a lot. But now, as a solo artist, Moore has a unique opportunity to radiate on her own, and the newfound freedom means a chance to take a no-holds-barred approach to her music.

"I've really built a confidence in my own voice and expressing what I need to express, however it needs to get expressed," Moore said. "I've given myself freedom. For so long, I was sort of lost within myself, like I wanted to let loose and explore and be free and try all these different things. But I felt like I had to, for some unknown reason, put myself into a box for other people. When I was younger, that's what I would try to do, and now I just feel so free creatively."

Voice on the Internet's visuals, as sporadic and bright as its tracklist, offered Moore a perfect outlet to showcase this liberation. The cover features a hazy yet vivid Moore, donning rainbow clothing, nails and hair accessories with half a broken heart on her cheek. It's the most cheerful symbolism for heartbreak, relating the rainbow after the storm to Moore's optimism for her future after the end of a relationship.

"I just knew that's what I wanted it to be because I've managed to find the rainbows in my heartbreak," Moore said. "I have seen the silver linings now of how I needed to grow on my own and embrace my own independence and how I really got lost in that relationship. I wanted to be able to create a world that I could live in that wasn't over-branded towards that message of the album because I feel like it speaks for itself. When you listen to it, you can hear what I wanted you to know."

Similar to her album's color scheme, Moore wants listeners to think of her in vivid shades of self-confidence. She is building a world around empowerment and expression, and Voice on the Internet is just one means of shouting that same passion into the world that she felt at age seven — only louder this time.

"This is what I want to evoke out of people: just me being me," Moore said. "I want other people to feel like they can be them because I'm just me. It's not maybe what you expect or what's easiest to deal with, but it's true and I think that's how people should be. Because I struggled with that, I like to be a voice for it. I've been on the other side of it, where I feel like I was really projecting something other than who I actually was in a lot of ways, and it wasn't serving me."