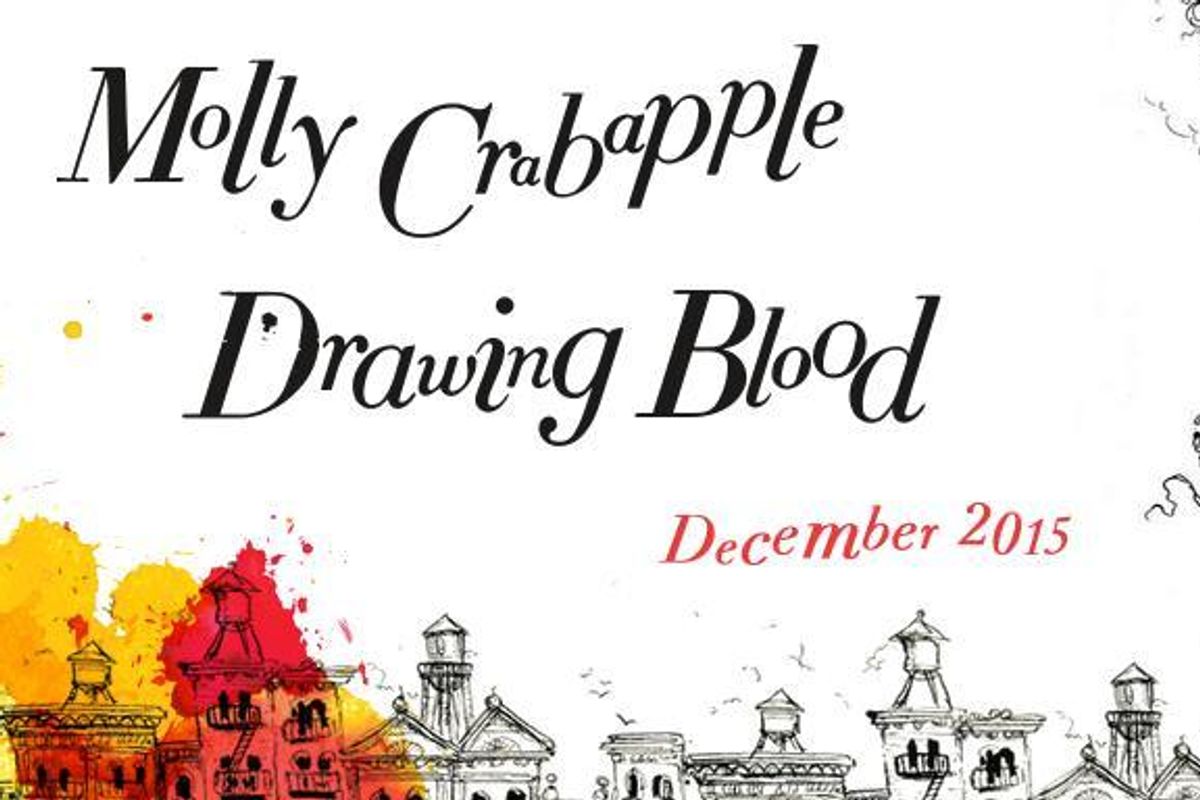 Artist and Writer Molly Crabapple On Her New Memoir, Beauty In Art and Why Childhood Sucks

Molly Crabapple is a workhorse. Based in New York, the artist and writer creates gorgeous paintings that juxtapose the political with the sensual, with literal fat cats downing champagne beneath burlesque dancers or a beautiful Lady Justice. She's also penned pieces for outlets like Vice, The New York Times, and The Paris Review, garnering fans like Patton Oswalt in the process. As of this writing she is currently working on a new show and promoting her excellent memoir, Drawing Blood, which tells the story of her transition from world traveling college dropout to respected artistic voice. Using illustrations to bolster the written material, Drawing Blood, out now, is a more intimate memoir than we're used to seeing, one that is blazingly honest and unafraid to offer up something real to chew on. On a warm October afternoon, she sat with me to discuss everything from her hatred of childhood to what stories she feels compelled to write about. Fatigued from a long night/day of working on a new piece, Molly was nothing but articulate, generous, and engaging.

It's a kind of old school idea that a memoir has to be a recap of one's entire life -- many memoirs now are more about discrete periods. Marjane Satrapi was still rather young when she released Persopolis, her graphic novel of coming of age during the Iranian revolution. I think it depends on if you want to take a broad view of your life or look at a particular time that has a great amount of meaning for you.

Who were you reading as you were writing your book?

Oh man…I was obsessed with Virginie Despentes. She's this awesome French punk rock feminist who is so scathing, but who also says such wise things about the world. I also read a lot of Sarah Nicole Prickett's writing. She doesn't have a book -- yet-- but her articles, which are often about things like fashion, art, or sex -- stuff that people sometimes dismiss as purely aesthetic -- are lacerating. She uses the aesthetic as a springboard to cut open the world. She's a really insightful critic of gender and sexual politics. Her piece, The Ultimate Humiliation, on Eliot Rodger's mass shooting, is, in my opinion, the best.

In the first part, you mention hating childhood. How come?

Well, how could anyone enjoy having to live in a world where you have to ask permission to go to the bathroom? I mean, a major aim of feminism was to free women from having the legal status of children. Ought to be a statement on how much it sucks to be a child, no?

It seems like you were more self-aware than other kids were -- is that an accurate observation?

Growing up in an atheist household was influential to me in terms of how I perceived things. I remember being seven or eight and thinking about dying. I wasn't being morbid or suicidal, I just recognized that I was going to die someday, and at the time my entire existence was more or less sitting in a classroom, staring ahead, and being forced to be obedient. It was terrible! I also think a lot of my politics were informed by not having to grow up with the idea of deity or afterlife or divine justice. It's harder for me to ignore structural injustices.

You also mention hating Jennifer, which is your birth name. Any particular reason for that?

I associate it with being a child in the world. It was the name given to me, not the one I chose. Most everyone now calls me Molly, but I still have my birth name on my passport. It just makes traveling for journalism easier. My dad, who is a Latino Studies professor, was going to name me Tania, for the companion of Che Guevera. If he had named me that, I probably would have kept it.


Another moment in the memoir that really struck me was when you mention how disappointing the semi-ruined Turkish palace, Ishak Pasha Sarayi was. It's so beautiful to you when you see the picture of it, so what changed when you got up close?

Well, we're fucking artists, right? We see the world aesthetically, and then shape it into an aesthetic product. So this picture was so gorgeous, so evocative, it made this giant impact on me. When I went to Southeast Turkey in 2002, it was right after the truce was declared between the government and the PKK, but the area was still heavily militarized, and so the castle felt a bit to me like a maiden being guarded by a dragon.

I think it's going to be this incredible, profound thing, but, by the time I got to the Iranian border, and was able to see the castle, it ended up having undergone a really awful renovation, with those slanted roofs you see on strip malls. I suppose Ishak Pasha Saray showed me that you can aesthetically fixate on an image, but the whole world is changing around you, indifferent to your obsessions. A bit of a blow to artistic narcissism.

How did that shape your feelings about art now?

One idea I absolutely despise is that art is inherently intellectual and separate from the physical act of making it. This idea is what enables fancier artists to hire laborers or unknowns to do the work for them. To me, art is a fusion between the mind and the hands, and you can't have one without the other. I tried really viscerally to describe what it's like to make a painting, an illustration.

You talk about being very shy, but then you took up art modeling. How did that embolden you?

Oh god, it had nothing to do with "emboldening" me, or shyness. Being extroverted is utterly different than taking off your clothes. I'm still sometimes shy as fuck. But, as to what I liked about being a naked model, besides the money (and lets call it what it is, posing for strangers in their hotel rooms is sex work), is that it took precious dumb female innocence and burnt it. Women are always told that their value lies in being some combination of "good" and "sexy." But to make money off your body throws you into the category of bad women, not to be respected, protected or taken seriously.

As far as shyness goes, I've always had a hard time speaking with people. I've always been in awe of people who can strike up conversation with anyone, because there's nothing in me that finds that a comfortable thing to do. For modeling, the idea of having to be charismatic and chatty really didn't come into the work. Also, my insecurity has always come from how I interact with other people, not my body, so it wasn't like I was trying to prove something to myself or get over a preconceived notion of what constitutes beauty.

On page 151 you write, "But only a puritan demands that art have something to say." What do you mean by that?

Well, I certainly think art can have something to say. But there's a value in the purely decorative. When you say art is only valid if it's an intellectual statement, you're removing beauty from the rest of the world. There's a great value in meaningless art that makes daily life beautiful -- in fact, the beauty is the meaning. To say "just beautiful" does a great disservice to beauty and sensuality.

Switching gears to discuss your writing, are there any through lines or themes that most interest you and that run through your work?


I'm really interested in smart people in adverse circumstances who are fighters. If my work had a central theme, then that would be it. My last article was about the Dallas Six, who were long-term solitary confinement prisoners, who blew the whistle on torture at SCI Dallas, in Pennsylvania. In return, guards gassed and beat them. Then the DA falsely charged them with "rioting." What interested me about the case, apart from the fact that the state's case against them was nonsense, was that these guys are so smart. One of them, Andre Jacobs, has been in prison since 15, on some drug possession charge. He's spent the last 14 years in solitary. Jacobs trained himself a paralegal, then sued his prison for violating his civil rights. He represented himself in court, and won $115,000. The odds of doing something like this are infintesimal. This man is brilliant. The basis of my writing is respect. The last thing I want to do is write a story where the coverage is focused on the desperate plight of "the other." So, even when I write about terrible things, I like to do it through the lens of people I admire fighting against them.

Lastly, are you satisfied with the way the book came out?

Well, I hate everything I produce, usually. Actually, at first I hate it, then a few weeks pass, and I'm like "hmmm." Then, I fall in love. Then, more time passes, and I hate it more. Eventually, I make peace with it, but mostly I see my past work as a bunch of malformed monsters. I'm sure the book is no different.