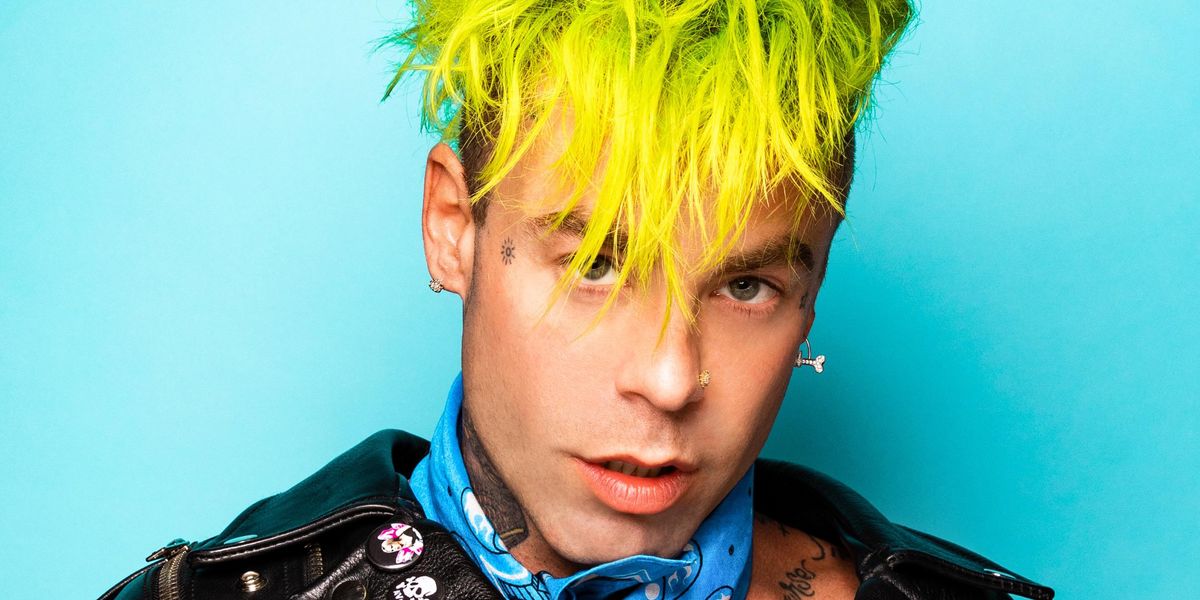 Let Mod Sun give you a brief personal history of pop punk, and let him do it without too much nostalgia. Let him educate these TikTok kids discovering the genre without being in any way patronizing. Let him begin, say, with the year 2003. "We were in a very masculine-driven time," the artist recalls over Zoom from his home in Hollywood. "And to hear a guy like Chris Carrabba, who's in Dashboard Confessional, screaming and yelling his lungs out about being heartbroken by a girl — maybe we don't talk about this subject enough, how mind bending it truly was. If you search emo back to the roots, you're gonna find Morrissey and the Smiths, you know what I'm saying?"

That vulnerability resonated with Mod Sun back when he was the teenager Derek Smith, being raised by his mom and sister in Bloomington, Minnesota. "I didn't have a father figure in my life," he says. "I'm a Pisces, very sensitive, and it really spoke to me as a way to be like, 'Dude, you can be honest, you don't have to walk around thinking that you need to be the cool guy.'" He loved the music enough to stake his career ambitions upon it, immersing himself in the local scene, befriending rising touring artists (Fallout Boy crashed in his living room in ninth grade) and soon enough picking up a pair of drum sticks of his own.

It was a great time — the best time — to be a pop punk fan. Too earnest for the indie kids but too angsty for the pep rally, the genre has always been self-admittedly for outcasts and underdogs. But during Mod Sun's teenage years, which segued into the sceney mall goth Myspace era, it became for a brief and potent period extremely mainstream.

"Anything that happened from 1999, 2000 to like 2008 — that was the heyday of pop punk, emo, scene, post hardcore, screamo, all of that," he explains. "It all happened right then. And I was right there. I was in the front row watching the bands." He joined a couple, too, drumming with post-hardcore acts Four Letter Lie and Scary Kids Scaring Kids in the early 2010s.

Then shit petered out. Somewhat tragically, people stopped filming music videos in empty swimming pools. A decade younger than the Madden brothers but a decade older than Lil Huddy, Mod Sun happened to graduate from high school right when his genre of choice was shoved aside by Soundcloud. Like his longtime friend and collaborator Machine Gun Kelly, he moved with the times and spent much of his 20s as a solo hip hop act, albeit never dispensing with guitars completely. He made a home in Los Angeles, battled and curbed substance addictions, dated several prominent influencers. He was partying, at least, like a rock star. But the scene was long dead.

Enter the e-boy era. Today, Mod Sun announces the deluxe version of his first-ever pop punk solo release, 2020's Internet Killed the Rock Star. Alongside eight new tracks, it includes an acoustic version of "Flames," his catchy scream-along love song with Canadian Hot Topic icon Avril Lavigne that has racked up more than 25 million streams and counting. It's by far the most popular music Mod Sun has ever made, and not coincidentally his most authentic. Over the past two years he's gotten sober, dusted off his drumsticks and fully embraced the Gen-Z pop punk revival, working alongside Machine Gun Kelly, Blink-182's Travis Barker and veteran alt rock hit producer John Feldmann to not only release his own creative output but also mentor the teens who are experimenting with old skatepark sounds that have become new again. In January he co-directed and styled Kelly's acclaimed musical short film Downfalls High, starring e-boy Lil Huddy as a tortured punk kid in love with a good-girl-gone-bad played by Euphoria's Sydney Sweeney.

To say the return to genre has felt natural would be an understatement. "I can feel completely at home when someone says the words pop punk," Mod Sun says. "I'm true to this, and I'm not new to this. There's a lot of people in this genre-bending area that we're in, that are new to this – which is great, love you. But, you know, it's really in my DNA. So I think that's shining through."

What's striking about Mod Sun is his lack of cynicism. You don't get the sense he's opportunistically hitching his wagon to the likes of Huddy, one of TikTok's biggest names. Nor does he appear threatened by the younger generation, for all their millennial-hating bravado. (Actually, he's viscerally horrified by the thought. "Oh my god, may I never ever be one of those people," he exclaims, shaking his head. "Oh my god.")

Genuinely, Mod Sun just wants to share his knowledge and impart a bit of mosh pit-honed wisdom and encouragement. "I love this kid so much," he says of Huddy. "When we cast him, I was just like, 'Bro, this is amazing. You're gonna do amazing. This is awesome.' And he's like, in his head. He's like, 'Really, man? People give me a lot of hate.' I will bring someone up if I have the chance to bring someone up. Like, that is my absolute duty."

Scene etiquette like this is something that Mod Sun would like to see revived by Gen-Z alongside the checkerboard Vans. He offers a pretty watertight explanation for their interest in his beloved 2000s bands: the search for community in an isolating and anxious online world. And helping them find that is his greatest honor.

"The pop punk scene was a bunch of people going, 'It's us against the world.' Not, 'It's me against the world.' There's a big difference," he says. "In music for the last five years, I think it was everybody trying to do it all by themselves." If he were to define pop punk as a genre in 2021, he would say its hallmark is "the resurgence of friendship and music."

A lot of that is happening on TikTok, a platform Mod Sun professes deep respect for. "I can tell you exactly what TikTok is," he says. "TikTok is the listeners telling you what's going to be big. That is so cool." For fans to be in charge of everything is the pop punk's greatest dream, and it's becoming a reality right now, chilling news as that might be to A&R execs. "It's not a dude who's bald and 65 years old, and literally doesn't give a fuck about anyone, going, 'This is the next big star.' It's these kids making the artists huge. It's never happened in history before. It's a huge blessing."

What does concern Mod Sun is our current cultural obsession with youth, which he has witnessed place enormous pressure on his already anxiety-ridden musical mentees. "I think it's always been hard to be young, but it's really hard to be young right now," he muses. "It took me a long time to get young, to be honest, and now I'm surrounded so many times by a bunch of people that I would consider old and outdated with horrible ideas."

Related | Let Yungblud Teach You How to Be Weird

He gives the example of Jay-Z, who was already 28 when he dropped Reasonable Doubt in 1996. "And we have an entire generation of kids that think that if you didn't make it by 21, you better quit. Man, I like to be the pinnacle of the opposite." (So how old is Mod Sun, anyway? "I'm in my 30s, man. They probably don't want me to tell you that. I am proudly 34 years old, kicking ass at the highest degree I've ever been.")

The deluxe version of Internet Killed the Rockstar is sunnier in outlook than its source material, and Mod Sun attests that it contains some of his favorite songs that he's ever made. "I'm in a state right now where I'm feeling grateful, but also a sense of redemption," he says. "That I was doing the right thing the whole time. To be this far into my career, and being at the highest point that I've been at so far, is right down to the basis of why I do everything I do in art."

His other big upcoming project is a new Avril Lavigne record ("biggest honor of my life"), one that diverges from the artist's recent stint behind the piano and embraces her sk8er girl past. Original fans won't be disappointed. "You're not even ready. The songs are just absolutely incredible."

Head over to the Daily Mail to see paparazzi pics of Kelly, Megan Fox, Mod Sun and Lavigne on a double date at Soho House, green mohawks and everything, no doubt plotting the next stage of the cultural tattooed, hoodie-wearing takeover. All four of them are currently getting a second shot at the 2000s, and not thinking twice about taking it. After all, if they don't, who will be there to warn the kids about what can happen?

"There's a really good group of people who are speaking to what will be the leaders of the world someday," Mod Sun says, modestly taking himself out of the equation. "It does give me hope. We're taught to think that there's a lot of fake in this world, and I think the real is taking back over. Long live the real ones."