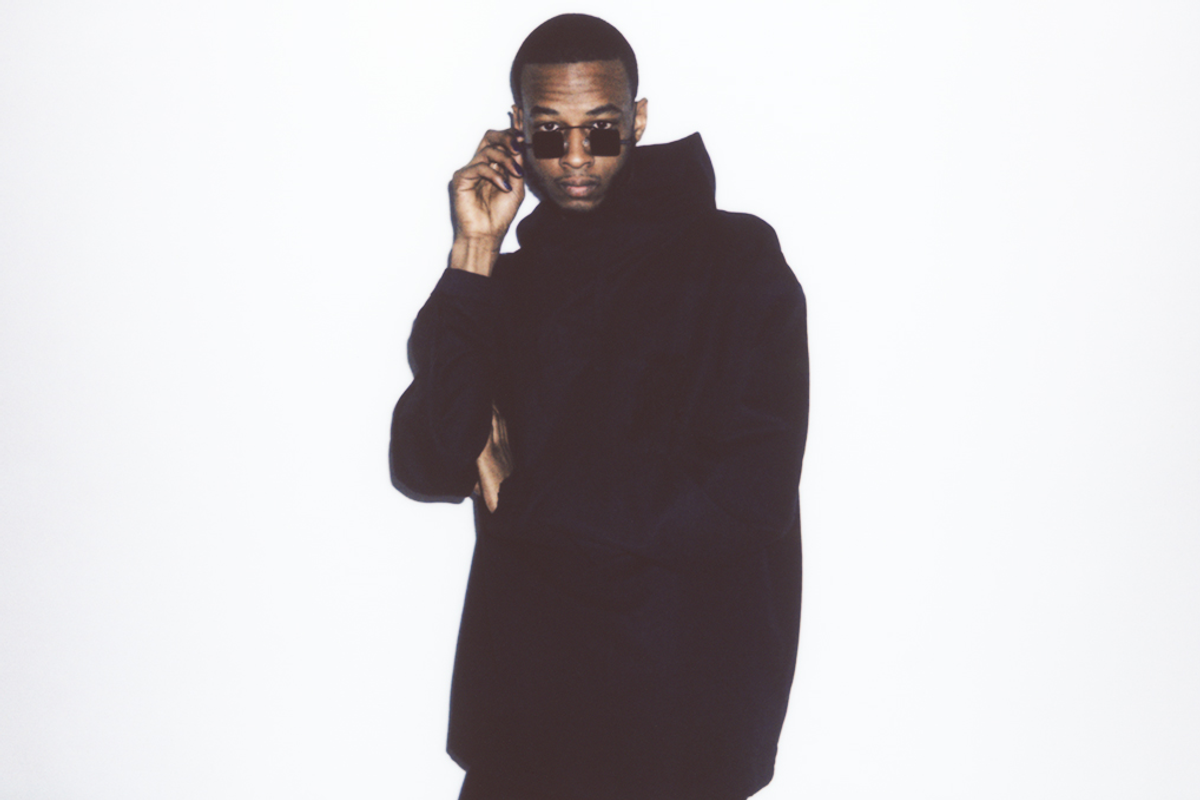 Mister Wallace Is the Cool Mom You Never Had

Mothers work harder than anyone in the world, so it's fitting that Mister Wallace adopted the identity of a Cool Mom for their newest album of the same name. The Chicago-based rapper's drive is relentless, and rare in the way they channel their energy to also amplify the voices of artists around them. Like a mom, Wallace is admittedly nothing without their family, and co-founded a music label Futurehood that pools together resources to help support their daughters and, on a larger scale, build stronger community. "People have said to me, 'You met me when I was homeless, and now I have a role in your crew, and a job, and housing, and funds, and income," Wallace says. "That's when I know I'm doing the right thing."

When I sit down with Wallace, they're hunched over a laptop prepping songs for an early evening DJ set at the Ace Hotel in Chicago's West Loop. Their weave — a caramel blonde, ringlet fantasy that's wrapped into a head scarf and perfectly embodies Cool Mom — is somehow flawlessly intact, which is a feat considering they'd been out performing and partying well past sunrise the night prior at Futurehood & Friends. And this is just two of three gigs Wallace has booked in a 24-hour period; after spinning the Ace's High Tea, a cocktail party hosted by local performer Darling, Wallace will move Uptown to DJ at Jackhammer until, again, early morning. But being Mister Wallace, Chicago's unofficial Cool Mom, is now a full-time job — something they've made a top priority this year.

"Do I ever feel tired?" Wallace ponders, their bright eyes framed by bags that answer my question without needing words. "Well, does a mother ever feel tired? Like, all of the time. But I can't imagine wasting a day. You only have 365 days a year, so you make the most of it. I mean, if it kills me, it kills me. Get rich or die trying."

As part of Red Bull Music Festival Chicago, Futurehood & Friends was, in many ways, the climax of Wallace's maternal efforts thus far. The event presented a diverse showcase of the city's most talented musicians, DJs and parties, from 15-year-old breakout rap star Kidd Kenn to ferocious transgender emcee KC Ortiz and Drag Race alum The Vixen. Wallace transformed the Wicker Park venue into a slick space ship, imagining a future where QTPOC bodies are not merely assimilated into society, but fully dominating the ranks. Performers danced around a control deck on stage, while videos of stars sent the audience through galaxies.

Naturally, Wallace was the evening's last performer, and kept themselves hidden until finally slinking onto stage with two backup dancers for their grand reveal. "My mother taught me that," Wallace says. "You never let the girls see you before — the anticipation. Then you can really channel the energy and focus on world-building, fantasy creation." They pause, and begins softly singing Veruca Salt's infamous brat anthem, "I Want It Now," from Willy Wonka. "I want the world, I want the whole world." They laugh, but Wallace isn't joking — they do want the world. On stage, Wallace dressed as Zenon, Girl of the 21st Century, a femme icon of the future who saves her space station by stopping a terroristic computer virus. With sparkly, silver bike shorts and a metallic puffer jacket, Chicago's Cool Mom set an unapologetic example for their daughters — performing jointless splits and strutting in heels — while also making space for them to independently thrive.

"When people don't have someone telling them that they're good, they spiral. Their mental stability becomes off-kilter, and it's hard to produce [work] and sustain yourself," Wallace says of their maternal role in the community." So I try to create space for that to change — room for people to feel validated and confirmed in their identities, because they're growing and evolving just like I am, and have always been. I've always been a natural leader and I don't want to be on top of anybody, but I do think that I have been able to build something positive by placing myself there. It's kind of like a service role, being a spokesmom for the kids."

Wallace has been a performer throughout their life, and always dreaming of their contributions to society with high impact. In 2005, the artist pursued one of our nation's most prized titles at the time: becoming an American Idol winner. "Season Five. It was my senior year in high school," Wallace says. "I was up there singing 'Rock With You' by Michael Jackson for 30 seconds, but didn't even get past the first round. And when that didn't happen for me, and I saw all these talented people in the stadium — sleeping in line, waiting to do this — I was like, Oh my God, I'm never going to be a star. So I started working in retail and became a retail cunt."

Fame, however, is relative — and Wallace learned they could still be a star, just on a stage much smaller than American Idol's. They created a queer rap collective called Banjee Report alongside DJ/producers aCeboombaP (real name: Anthony Pabey) and Hijo Prodigo (real name: Justin Mitchell), both of whom co-launched Futurehood in 2016, as well. "I really thought that because I didn't get on American Idol, or because I didn't come from a family like the Knowles or the Jacksons that I wasn't going to become that girl," Wallace says. "Now, I know that I am that girl. I just have to create that moment for myself, and it's been easier to do that by creating moments for others."

Wallace's 2016 Faggot EP, released through Futurehood, was their first official solo effort, and helped further etch the rapper's name into underground queer history. This project also birthed Wallace's two biggest tracks to date, "It Girl" and "Whoremoan," both of which were given music video treatments and produced by Chicago-based Jeremiah Meece. Above bubbly, ballroom-infused beats that build with the same tireless tenacity of Wallace, they assert themselves with a cocky flow. "Have you seen me in the magazine?" Wallace flaunts on "It Girl," and "Whoremoan" sees them tempting, "Damn this skin so soft/ Cashmere pussy soft/ You want to taste my milk? Lick lick lick."

Around that time, Wallace was living and working in New York — a big step for an artist who was born in Chicago and established a reliable, cult following in that same city. While Faggot was an impressive debut effort, and revered within certain queer circles, the EP wasn't as successful as Wallace had hoped it'd be. I ask if Wallace has ever felt like they don't get the attention they deserve — a loaded question for any artist who's dedicated their entire life to their craft. "[Faggot] didn't do the thing that I thought it might have," they admit. "I wanted to tell myself that it was because the verse wasn't good enough or because I didn't put enough money into it. And things really started to slow down for me; I got really down on myself, and I didn't really have any gigs. So I definitely did feel that at one point, but I eventually stopped caring when I came out to Chicago and all these people I didn't even know were like, 'I listen to your music all the time; Spotify told me about you; you're big in the South.' It kind of woke me up, and it's what had me get up today and work eight hours after twirling for an hour on stage last night."

Now, Wallace lives back in Chicago — a cultural mecca that they describe as a "portal and a connection to the universe." They also argues that it's realer than New York "because it's not about the cameras here. It's not about wanting to be in an industry. It's about wanting to be alive because you could easily lose your life." Living in New York, Wallace says they grew further from what matters most — "I missed my mom, I missed my brother, I missed my family and friends" — and realized he needed to prioritize things differently. "I had to come back to Chicago before there was any kind of blowing up that was supposed to happen," Wallace says.

Having lived on Chicago's North Side for a long time, Wallace decided they wanted to surround themselves with a Black neighborhood and relocated to the "vibrant" South Shore, where they've been working for the past two years on their new eight-track album, Cool Mom. However, the majority of their latest project was finished within the last few months, "taking that express bus, number six, through downtown on the phone, writing her little raps," Wallace says. They reunited with Jeremiah Meece to help develop the album, but Wallace's brother also produced two of the tracks. "Faggot was kind of my 'FU, I'm me,' and Cool Mom is so like, 'I love everybody.'"

On "Heavy Heat," Wallace takes on different characters, oscillating between the perspective of a young queer kid ("Mama, they been calling me a faggot") and Cool Mom ("Be who you are [...] baby, use your voice"). The rapper invites Petty (of Petty Butter) and Eric Dontè onto "Salad," which continues the album's maternal through-line. "Cool Mom in the kitchen, yeah she whipping it up," Wallace boasts above aggressive production. "Here We Go" is Wallace at their absolute best, as they powers through the track with unwavering confidence. "Here we go again/ I'm about to win/ Snatching tens," he repeats. Cool Mom closes with Wallace calling out all their "daughters, sisters, and mothers," many by name. "Plot twist, a faggot in the cockpit/ We gone, go put your shoes on," they rap as an open invitation to their family.

"It's kind of a time capsule of where I've been, where I am, and what I want," Wallace says of Cool Mom. And what they want is quite ambitious. Through Futurehood and their own solo efforts, Wallace says their goals extend well beyond making music. "I want to go to schools, I want to feed the homeless, I want to build media platforms and festivals and create healing," they say. "I'm a holistic type of person; the party and the fun and the glamour is great, but you have to have a place of rest in order to achieve those dreams."