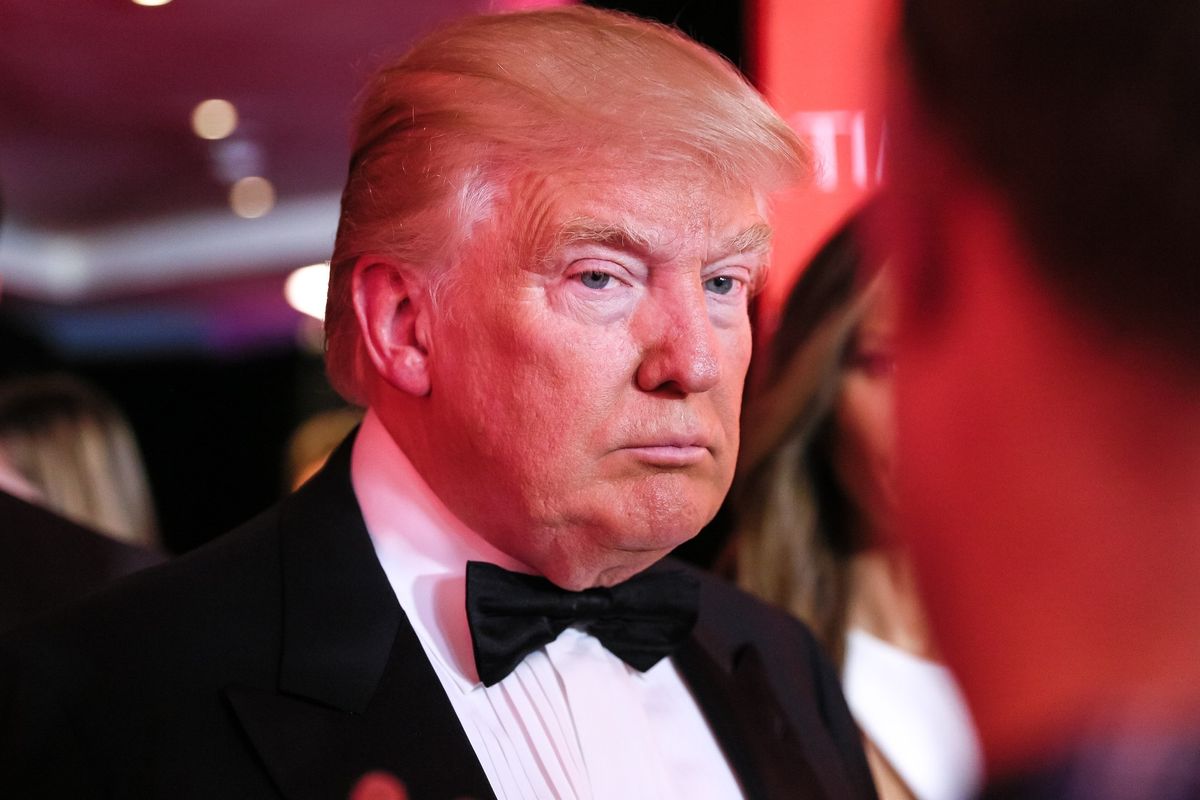 [Update 10/13/16, 11:15 a.m.: According to BuzzFeed News, last night a fifth contestant from 1997's Miss Teen USA pageant came forward to confirm that Donald Trump did, in fact, walk in on them changing."It was certainly the most inappropriate time to meet us all for the first time," former Miss New Mexico Teen USA Victoria Hughes said. "The youngest girl was 15, and I was the eldest at 19."]

[Update 10/12/16, 7:45 p.m.: Miss Washington 2013, Cassandra Searles, has come forward to allege that Donald Trump groped her in a Facebook post. Calling him a "misogynist" who "treated us like cattle," she added in a follow-up comment that, "He probably doesn't want me telling the story about that time he continually grabbed my ass and invited me to his hotel room."]

Last week, audio of Republican presidential nominee Donald Trump making abject, sexually degrading comments about women surfaced. And just when you thought things couldn't get any more disturbing, newly-surfaced reports allege that Trump also acted in a completely inappropriate manner with the contestants of the beauty pageants he owned, including a group from Miss Teen USA.

As Buzzfeed is reporting, four women who competed in the Trump-owned Miss Teen USA pageant in 1997 came forward to talk about the time Trump walked into their dressing room while they were changing. At the time they contestants were between the ages of 14 and 19.

"When he started running for president, that is one of the first things I thought about: 'Oh, gross, this guy walked in on us in the pageant,'" former Miss Teen Vermont Mariah Billado said. "Girls were just scrambling to grab stuff, whatever garments they had. I remember putting on my dress really quick because I was like, 'Oh my god, there's a man in here." A concern which Trump apparently responded to by saying something along the lines of, "Don't worry, ladies, I've see it all before."

Three other former contestants (who chose to remain anonymous) confirm the incident, with one saying it was "shocking" and "creepy," though they added that, "at the time, you're a teenager, you're intimidated — it's Donald Trump, he runs the pageant."

And while a few former contestants apparently dispute the story, this disturbing incident bears awful similarities to a few other stories told by other beauty pageant queens. Yesterday, Tasha Dixon, a former Miss Arizona told CBS that, "He just came strolling right in. There was no second to put a robe on or any sort of clothing or anything. Some girls were topless. Other girls were naked," adding later that she believes Trump owned these pageants to facilitate getting "around beautiful women."

"Who do you complain to?" Dixon said. "He owns the pageant. There's no one to complain to. Everyone there works for him." Bridget Sullivan, a former Miss New Hampshire in 2000, also leveled similar complaints, saying he just walked backstage while "we were all naked."

However, Trump's camp has continued to vehemently deny accusations of any impropriety. Despite the fact that Trump bragged on a 2005 episode of "The Howard Stern Show" that speaks quite to contrary.

"I'll go backstage before a show, and everyone's getting dressed and ready," he said. "I'm allowed to go in because I'm the owner of the pageant, and therefore I'm inspecting it. You know they're standing there with no clothes. And you see these incredible looking women. And so I sort of get away with things like that."