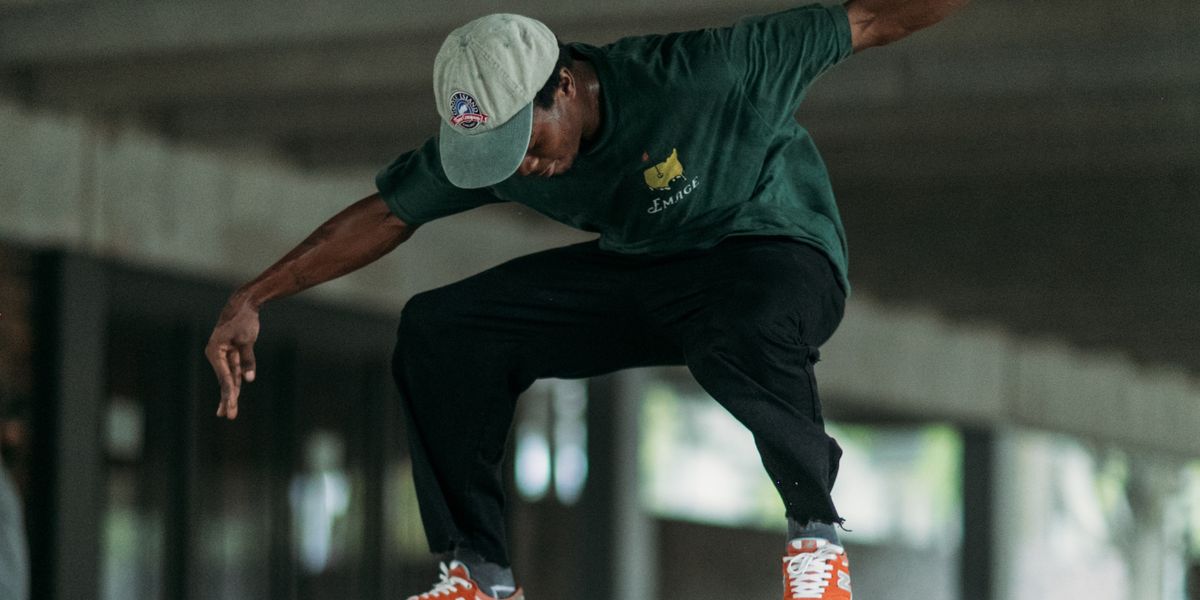 Like many places hit hard by deindustrialization, Rockford, Illinois was a city teetering on the edge. Located close to Chicago's thriving cultural hub, the city had been a small industrial powerhouse in its heyday but by 2016 was consistently on the list of the FBI's most dangerous cities in America. While some coped with the crime rate, economic challenges and the difficult job market by turning to drugs and alcohol, other young Rockfordians filled the void with creativity and innovation. And so whether in response to economic desperation or from something in Rockford's DNA, in recent years the city's artistic blood got a new heartbeat.

Fashion designer Virgil Abloh is a Rockford native. He donated his new Off-White™ soccer jerseys to his former high school's graduating team, showing he still feels connected to home. Fashion photographer and Rockford native, Katie Levine (who happens to be the sister of this writer, also a Rockford native) shoots for publications like Vogue, V Magazine, and PAPER (and also contributed the photos for this story).

And now, Rockfordian Bing Liu is being hailed as a visionary director. Since it first started making the festival rounds, Bing's new documentary, Minding The Gap, has won several prestigious awards like Best Documentary at New York Film Critics Circle and Best Feature at the IDA awards and the film was just nominated for an Oscar in the Best Documentary category. A captivating film with Rockford and skateboarding as its backdrop, Minding The Gap tells the story of Bing, Zack Mulligan and Keire Johnson, whose own histories and experiences serve as entry points to examine economic challenges, race relations, and domestic violence, three issues that dominate our national discussion.

Bing filmed the doc over a ten year period as a passion project, shooting whenever he could get to Rockford and editing footage in his bedroom. Underneath the feature's many layers, skateboarding remains the psychological core. It keeps the main characters stable during their volatile adolescences. For Bing, for instance, skateboarding offered him a life outside his abusive household. It also became the substrate from which to explore his creativity in film. For Zack and Keire, skateboarding was their art. Zack observes that "skating is 100% expression. People call it a sport or an action sport or whatever the fuck that means. But I've always said it's more like a dance. It's more like painting. It's more comparable to something like that. When you're skateboarding, it puts your emotions and your ideas into physical motion. You can tell how someone is feeling when you watch them skate. As a skateboarder who's been watching skateboarding for a long time, you can read someone's entire personality the second you see them step on a board. And I think it's why skateboarders have this huge connection to each other all over the world. It's like listening to someone's music when you watch them skate. It's them coming out."

Physical action as creative expression is one of Bing's central themes. He reveals emotions and character traits in scenes that show how boarders tackle a trick, handle a fall, or smash their board in a fit of rage. There's always a sense that something emotional underlies their physical actions. As Bing unveils their life stories, their skating becomes more expressive and understandable, creating genuine moments of sadness and ecstasy through their reckless artistry.

In each subject's story, there is a fundamental unhappiness and broken relationships at home that put their skating in context. "I was really depressed when I was younger and I was living at home," Keire says. "There were a lot of days where even though I could skate, I would just sit at my house not doing anything at all." He was split between two homes with a father that would beat him and a family he continues to have trouble relating to. Zack, meanwhile, grew up with a mother that had left the family when he was a small child and later finds himself thrust into fatherhood unexpectedly. And for his part, Bing suffered abuse at the hands of his step-father, and his step-brother recounts hearing the fervent screaming coming from Bing's room while he was beating him. While the domestic situations of the three skaters are extreme, each resonates fierce honesty because of Bing's masterful pacing.

Skating as catharsis, as a release of emotions to create art, makes it an accessible metaphor across generations and demographics. But it's nevertheless an imperfect antidote for family pain. Drugs and alcohol are a constant presence in the film.

"I had a handle of vodka underneath my bed when I was a teenager because it helped me escape," Bing recalls. Of the three, the director seems to have been the most isolated by his abuse at home, keeping it to himself for the most part and looking for a way out. Throughout the film, we see the ubiquitous 30 racks, people screaming with joy and laughter after doing or saying something crazy, and other examples of people who drink to let it take them where it will. While he includes these scenes for comic relief, Bing maintains the tension that things could go too far at any moment. Often, alcohol appears to be calling the shots.

Zack's drinking is portrayed as the most problematic, but he considers this depiction of him in the documentary to be overdrawn because of Bing's often inability to find him for filming, resulting in him tracking Zack down at local parties. With insight, though, Zack admits that his drinking has been unhealthy and is not separate from his anxiety and depression. "I have a lot of anxiety and feel a lot of stress," Zack says. "If a couple drinks makes me feel better in a social situation, or in a situation where I might have a lot of anxiety. Fuck man, if it works I'm not gonna knock it."

It's not a perfect explanation, but Zack would admit he's not a perfect person. Keire and Bing were also candid about their own shortcomings when we spoke; each appeared to have the strength to confront their pasts and accept responsibility with grace.

One area of his life that Zack's still working on is his dysfunctional relationship with Nina, the mother of his child. Their dynamic becomes a focal point of the film and when she declares that Zack hit her during an argument, it becomes more challenging to find sympathy for him. But Bing shows maturity as a filmmaker in his approach to Zack — he forgoes moralizing or truth-seeking in favor of telling a complex story with which the viewer can wrestle for meaning. Bing examines how violence affected their families with an observer's eye. Zack says, "Me and [Nina] constantly got into it. There were times when it got a little crazier than others, and I think that's dramatized in the film. But it was fucking rough man. We didn't know how to handle it and we went a little crazy you know?... Me and Nina know what happened. Other people involved know what happened. But I also think that was a part of the film that needed to be in it."

Bing says, "There's a lot of men who are not stepping up to the plate, being honest, and having those difficult conversations. That makes people like Zack and Keire even more commendable." These days, Zack has taken charge as a parent and he seems to have worked things out with Nina for the sake of their son. He is also expecting another child with his current girlfriend.

In Keire's case, he took responsibility for himself by pushing through the difficult process of leaving family and hometown familiarity to seek more when he moved to Colorado. "I noticed that once I moved, I was just so open to experiencing everything. I became happier with the outcomes too," he shares. His escape from Rockford wasn't out of antipathy towards the place or the people, but a growing self-awareness he might absorb negative things around him as givens. "I can't let myself be around this for too long because, in most cases, you are a product of your environment. I had a few friends that were just doing stuff and I was just like, 'I can't be here.' Because, who knows? I feel like, in five years, that could be me. Let me do what I can to get away." Keire feared being another statistic lost to drugs` or violence, and did what he thought was best to avoid that.

Bing's film sifts through layers of personal and social influences on three young men in a small Illinois town in decline. He unites the leads in a friendship born of common pain, but sustained through shared experience. Minding The Gap is one of the year's most buzzed about movies with a clear shot at winning an Academy Award. Bing cared about decent, smart people with complicated, painful lives and produced a film that connects with viewers on a deep level. Minding The Gap provides hope and a sense that one can go through a treacherous journey and make it out on the other end, returning home better than you were.