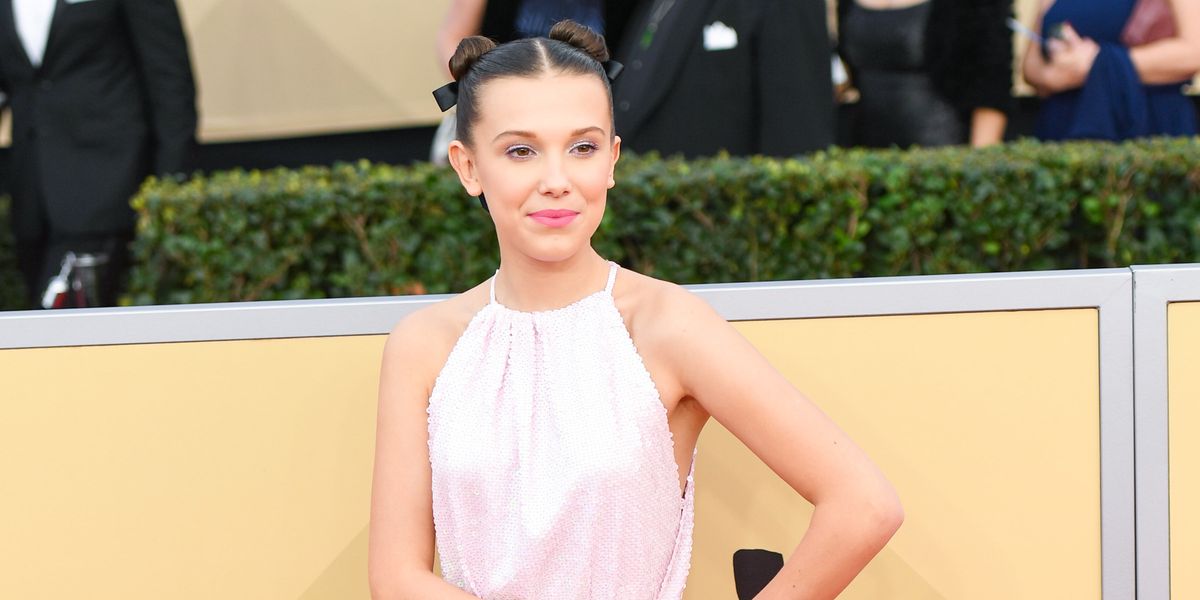 The Internet is split between outrage and horror over an Instagram post made by 14-year-old Stranger Things actress Millie Bobby Brown. In the now-deleted post, Brown defended Penn Badgley's character Joe Goldberg — a violent and unhinged bookstore owner who becomes obsessed with a female customer — on the Lifetime/Netflix psycho-thriller series You, even suggesting his behavior is romantic.

A few online have been vicious in their rebuke of MBB, but most commentators have pointed out that canceling or bullying a 14 year old is pretty gross no matter the context. Mostly, the Internet's distaste for the post has been voiced in a tone between concern and condescension.

Our distaste for Brown's post has a lot to do with the consensus recently reached in a debate — detailed by any number of think pieces but maybe best summed up by a pair of Atlantic essays called "How Rom Coms Normalize Stalking" and "From 'Hitch' to 'Say Anything,' How Rom Coms Distort Romance" — about how positive depictions of aggressive male romantic pursuit are sexist and harmful to those on the receiving end.

Brown's take seems even more egregious given that, unlike the romantic comedies typically named to demonstrate this trend, You clearly intends for Goldberg to be a villain, rather than a morally ambiguous antihero, a la Breaking Bad's Walter White or The Sopranos' Tony. It was clear to Variety that his character "goes beyond antiheroism" and Collider named Goldberg 2018's "Best TV Villain" — so why wasn't the same clear to Brown? Doesn't she read the Atlantic?

On top of that, Penn Badgley has taken to posting cheerful, gently condescending responses to female fans tweeting about the appeal of his character. He gets it — why doesn't she?

Obviously, Brown's comments are a bummer. It's disappointing that she did not (miraculously) escape indoctrination by the deep reserves of film, literature and TV narratives that depict stalking as classic heartthrob behavior. And it sucks that 18.6 million followers heard her affirm this narrative.

And obviously, concern and empathy is preferable to anger. However, even the gentler responses, which acknowledge that 14 might not be a reasonable age for a girl to have neatly dispatched all of her internalized misogyny, still seem to insist that it's her responsibility to do so, and she needs to get to work.

Maybe there's a case to be made that, given Brown's power and influence, she has a special responsibility as a celebrity to express the "correct" take on something like You because of the number of people who will hear it. This is often the logic used to criticize women celebrities who express limited understandings of feminism.

This argument has many merits, but I'm more interested in why it's still so easy for a girl like Millie Bobby Brown, who has more resources and access to progressive cultural discussions than most, to mistake such obvious violence for romance. Is it really so surprising that a few blog posts and think pieces haven't fundamentally challenged such a long-standing cultural script?

Even if we've truly stopped making movies that romanticize male romantic obsession and stalker-like pursuits, it's still easy and likely that young women are coming into contact with movies (and other art) that does so without the appropriate political sparknotes. This is not mention the many real-life and harder-to-fathom cultural norms that echo that sentiment.

And who should really be instructed to "educate themselves" or are in need of "maturing"? Young female consumers, or the culture at large?

Even the gentler side of the reaction feels like it speaks more to our collective denial about the pace of cultural transformation, and the noxious, systemic ways culture continues to value and depict women, than it does about the failings of one 14-year-old girl's wokeness.

When we focus on "educating" Brown, we're still focusing on how she should change, rather than the overwhelming evidence indicating the urgent and deep change the culture she picked up her logic from needs.

The emphasis on Brown's behavior however, is predictable. In general, we have a terrible tendency to punish young women who do unpalatable, incorrect things like, say, diet, or pine for a boyfriend, or admit that a now-discredited flavor of male hero appeals to her — young women who reflect an unflinching, keen awareness of sexist cultural queues and scripts that we'd rather pretend have faded away.

Girls like Brown fail our ubiquitous cultural imperatives to "know their value," and "respect themselves." We see them as tragic victims and objects of pity, when, albeit accidentally, they're simply responding to what culture tells them about their worth and conventions of romance and sexuality.

Our concern and outrage makes sense. The idea that Joe Goldberg's stalking is a form of devotion is rightfully repulsive to our 2019 sensibilities. And it's disturbing that Brown can't tell the difference between stalking and devotion in an on-screen relationship, especially when there are so many clues hiding in plain sight.

But what we should be disturbed by isn't Brown's ignorance, but rather the entirely unpleasant fact that in 2019, a 14-year-old girl can still watch Netflix and see little enough in our culture to contradict the idea that stalking, manipulation and violence are noble or desirable acts of love, that she heads to Instagram to tell her 18 million followers about it.

It's easy to mistake cultural consensus for the cultural transformation. So when girls like Brown make it obvious how far we are from our ideals, diagnosing them will always be easier than facing our own failings head-on.