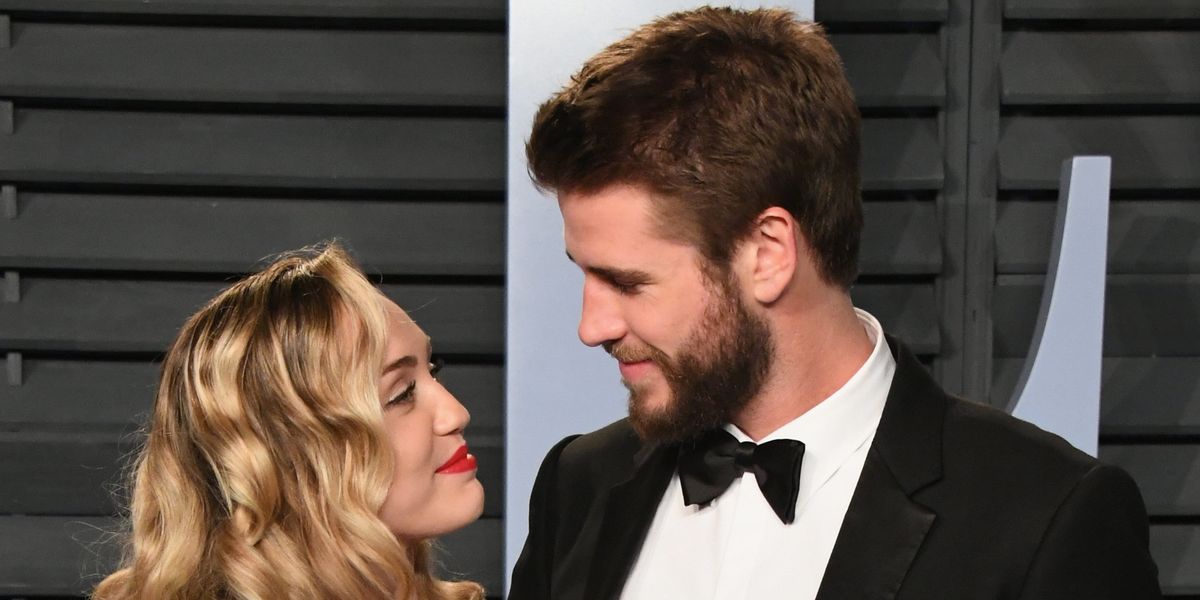 Update: Miley Cyrus and Liam Hemsworth Might Be Married Now

It has been a rough couple of months for Miley Cyrus and Liam Hemsworth. The on-again-off-again couple are still reeling from the loss of their Malibu home following the deadly wildfires that swept California last month, which luckily spared their pets but completely devastated the property. But despite the crushing loss of the pair's love nest, the couple looks like they are trying to end 2018 on a positive.

From the looks of it, Cyrus and Hemsworth may have quietly tied the knot this weekend. Photos emerged this weekend on Instagram from friend Conrad Jack Carr that appear to show the two clad in wedding attire cutting a cake together, surrounded by close family and friends. All the more damning are the "Mr." and "Mrs." balloons that hang in the background of the get together that make for a pretty unambiguous statement.

Back in March a source close to Cyrus and Hemsworth told Entertainment Tonight that the to were being intentionally very secretive about a possible wedding, "so only their friends will know and at the very last minute. This time they are doing everything their own way."

But Cyrus and Hemsworth aren't the only ones to get married on the down low this year. After announcing their engagement in July, Justin Bieber and Hailey Baldwin seemed to have already tied the knot following months of rumor and followed by Baldwin's changing of her last name to Bieber across her socials. A refreshing alternative given that 2018 has had a fair share of blockbuster weddings already ranging from the royal spectacle of Meghan Markle and Prince Harry to massive three-wedding epic from Nick Jonas and Priyanka Chopra, small quiet surprise ceremonies may just be the antidote to wedding fatigue that we have all been missing.

UPDATE 12/26/18: Miley seems to have now confirmed the news by posting pictures of her and Hemsworth kissing in their wedding attire. The couple also received a shout out from romance author Nicholas Sparks, who wrote the book that the movie The Last Song was based on which is where the two originally met ten years ago.