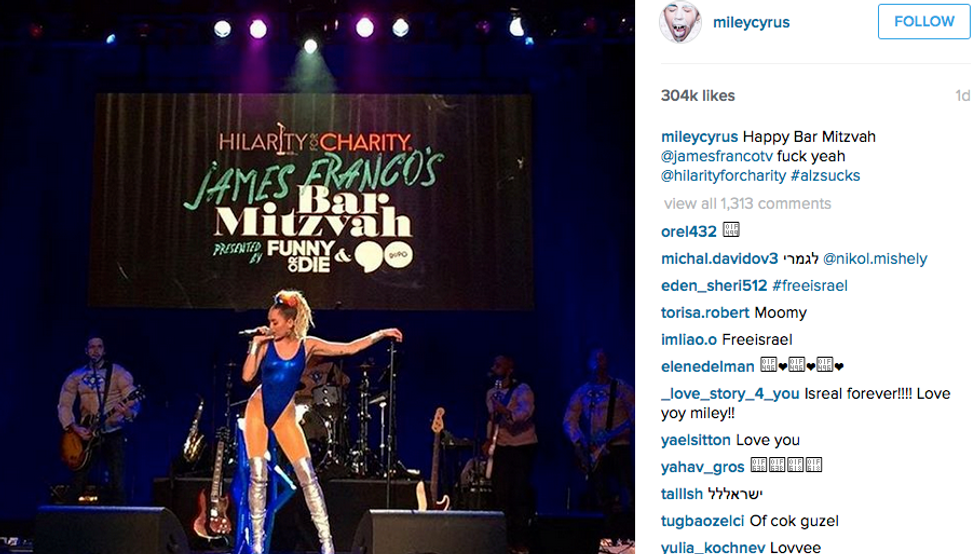 by Carey O'Donnell
PAPERMAG
Taking time from planning on all-naked concert with her BFF Wayne Coyne, Miley Cyrus was the musical performer at the Bar Mitzvah for that guy in your Intro to Creative Writing class, James Franco.

Though Franco is not a 13-year-old boy, the 37-year-old Renaissance man decided to celebrate his official entry into Jewish adulthood at the annual Hilarity for Charity benefit for Alzheimer's Association, hosted by Seth Rogen and his wife, Lauren Miller Rogen.

Franco was Mitzvah'd in a private ceremony earlier this month.

True to form, Miley went all out: her hair in dreadlocks, and dressed in a blue thong-leotard.

She was also equipped with a huge blue Star of David (and matching wristbands).


Ms. Ray Cyrus came out on stage to the classic creepy uncle jam "Super Freak," then got her warble on while slaying a few country songs.

Other celebs graced the stage at the benefit, including Bill Hader and HAIM.

At one point, Franco was strapped to a gurney, and Jeff Goldblum came out dressed as a Rabbi, set to circumcise Franco's peen (YES).

Go forth, James. You are a man.