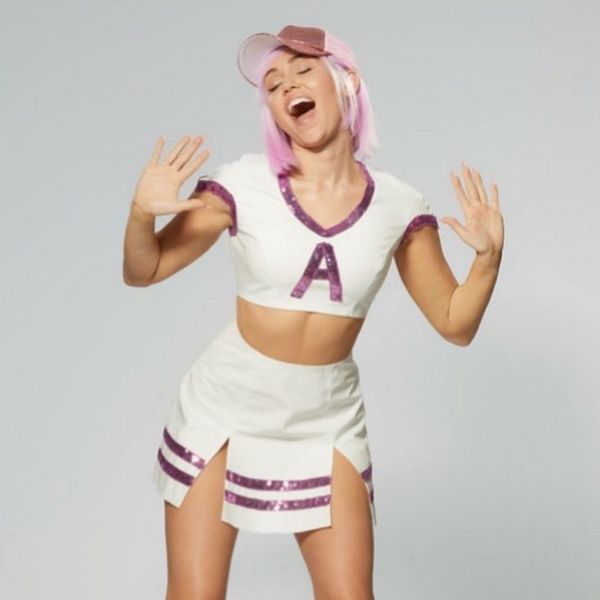 After much hype, Miley Cyrus' Black Mirror episode is finally available to stream on Netflix. The episode is part of three hour-long new stories comprising the futuristic show's long-awaited fifth season. Charlie Brooker, show creator and series writer, is responsible for the vision of Cyrus' episode, "Rachel, Jack, and Ashley Too." (Spoilers ahead).

In Black Mirror, Cyrus plays a secretly disillusioned, lavender-haired pop superstar named Ashley O, who, as part of her upbeat image, releases an AI doll called Ashley Too. Ashley Too is imbued with Ashley O's personality, including her (manufactured) relentlessly positive image. She's cute and perky, and can purportedly hold meaningful conversations with her fans — like an Alexa system that actually gives a shit about your feelings.

The tension between who Ashley O "is" to her fans — smiling all the time, singing songs she "wrote in her dreams" like "On a Roll" with lyrics such as "I'm flying high/ achieving my goals" — and who she actually is — strong-willed, angsty, and aching to write more meaningful, if altogether darker material — drives the episode's narrative arc.

Rachel is a socially awkward teen fan who has Ashley O posters plastered on her walls. She grows up with a sullen, guitar-playing older sister named Jack and her aloof father, who is raising his daughters solo due to his wife's death. When Rachel receives an Ashley Too doll for her birthday, Jack complains about how it isn't real and scowls at her younger sister's desire to connect with it.

Rachel and Jack essentially represent the duality of Ashley O's personality: following a talk show appearance where Ashley O, forever publicly giddy, announces the Ashley Too doll to the world, we see her sulking in the limo home with her aunt/manager. The next morning, she wakes up and writes a tune on her piano, which is actually a Nine Inch Nails song, "Right Where It Belongs." Lyric: "See the animal in his cage that you built/ Are you sure what side you're on?/ Better not look him too closely in the eye/ Are you sure what side of the glass you are on?" It's nice to hear Cyrus singing this. Consider too that her start was playing plucky pop star/real girl Hannah Montana, therefore the lyrics take on personal new depths. This is the kind of music — darker, grungier, rawer — her Ashley O character longs to make.

Following a fight about her contract while having shrimp tacos with her image-obsessed, controlling manager/aunt from hell, Ashley O is drugged and falls into a coma. While she is kept at home and technologists pull sonic scans from her brain (which are still angsty Nine Inch Nail songs) to make a new holograph of Ashley O, her aunt spins the whole debacle into a PR sob story of a pop star clinging to life from a catastrophic shellfish allergy. The Ashley Too dolls have been recalled from sale, save Rachel's, which is reprogrammed after the sisters figure out how to delete the part of her brain only used to spread positivity in her music and to the press. Rachel and Jack, with the help of a newly brash Ashley Too doll, race to wake Ashley O from her coma and reveal the truth of her circumstances to the world.

The arc of Ashley O's journey and struggles resonates with folks on the internet, mainly people who are fans of Britney Spears. The #FreeBritney movement has been in full swing since news of Spears' renewed fight to end her decade-long conservatorship emerged. Some fans believe that Spears hasn't been herself since her infamous 2007 meltdown, arguing that medication and over-management by her handlers dictate her every move.

These fans remember what once seemed like a more lucid Spears, marketed as America's Girl Next Door despite having a salacious image. If you'll recall, during peak Spears fame in the early-to-mid aughts, there were heartwarming books by Spears and her mother about their special bond, dolls styled after the pop star's most iconic music video looks, upbeat Pepsi commercials, and a starring role in Crossroads. As she became an adult before our eyes, everything about her was scrutinized, from her relationship choices (remember that annulled Vegas shotgun wedding?) to her virginity. What a nightmare that all was, looking back.

Remember, too, that Spears attempted to wriggle out of her tightly controlled image, not only by living her life as a young woman in the glaring spotlight, but in her career. There has long been a conspiracy that, pre-Blackout, Spears went rogue to write and record demos on her own, forming a collection of songs that would come to be known as The Original Doll. It is thought to be Spears' lost album, and would mark the first time, since 2003's "Everytime" that fans would get a taste of how Spears really felt about her unique circumstances.

One track rumored to be from The Original Doll is called "Rebellion," and features the foreboding lyrics: "Be wary of others/ The ones closest to you/ The poison they feed you, and the voodoo that they do/ But in rebellion, there's a sparkle of truth." In 2004, Spears showed up unannounced to KIIS-FM to promote her new project, ultimately playing an early version of a new song she wrote called "Mona Lisa," which compared her life as a figure subject to mass projection to the famous art muse with the mysterious smile. Lyrics: "She was taken under, drowning in her sea/ Running like an angel, she was crying and could not see (Oh, no)/ Now, see, everyone's watching as she starts to fall/ They want her to break down/ To be a legend of her fall." And in the chorus, eerily: "She wants you to know/ She's been cloned."

When her then-label, Jive Records, got wind of what was happening, a label representative told Billboard a week after Spears premiered "Mona Lisa" that the song wouldn't be serviced to radio, and "no album is scheduled at the moment." They did, however, note that Spears was "in the studio working on some material." Following her 2007 meltdown, publications from Rolling Stone on intensely profiled What Really Happened to Spears, essentially blaming her public fall from grace on a big, evil, corporate music machine.

In light of #FreeBritney, these discussions have lately picked up new steam. Cyrus' portrayal of Ashley O, as a pre-fabricated pop star not of her own making, whose autonomy is not her own, who is literally drugged when she fights back, echoes much of Spears' own story in ways that are so spot-on, it's unsettling. (It has been reported that the latest fight to "free" Spears has come after a renewed effort from her handlers to get her to take her mental health medication). In her own way, Cyrus has also advocated for Spears, shouting "Free Britney!" during a recent performance of "Party In the USA" at Beale Street Festival. Could it be a coincidence that Cyrus, also a former Disney star, would choose to play a character like Ashley O? Is it a coincidence that this episode arrives at a time of heightened concern about the pop idol?

As a @britneyspears fan I feel the need to stan @MileyCyrus all the way through this new era. She’s the only one in… https://t.co/xPOHJcC6z8
— filippoartini (@filippoartini)1559174397.0

So much of what makes Black Mirror successful is in its uncanny ability to echo current social trends and issues, through the advent of modern technology. Its overall tone, even when focusing on more lighthearted subject matter, like the journey of a girl who befriends her favorite pop star, is usually ominous. That's not a coincidence. It's a show that fundamentally asks us why we're not more afraid. Spears, to her credit, is currently determined to prove she's doing fine. The context is that we've seen her struggle for years. By documenting the darker side of the pop music industry, Black Mirror holds a proverbial mirror to it, as if asking, What does it take for all beings, even the most famous among us, to be truly free?