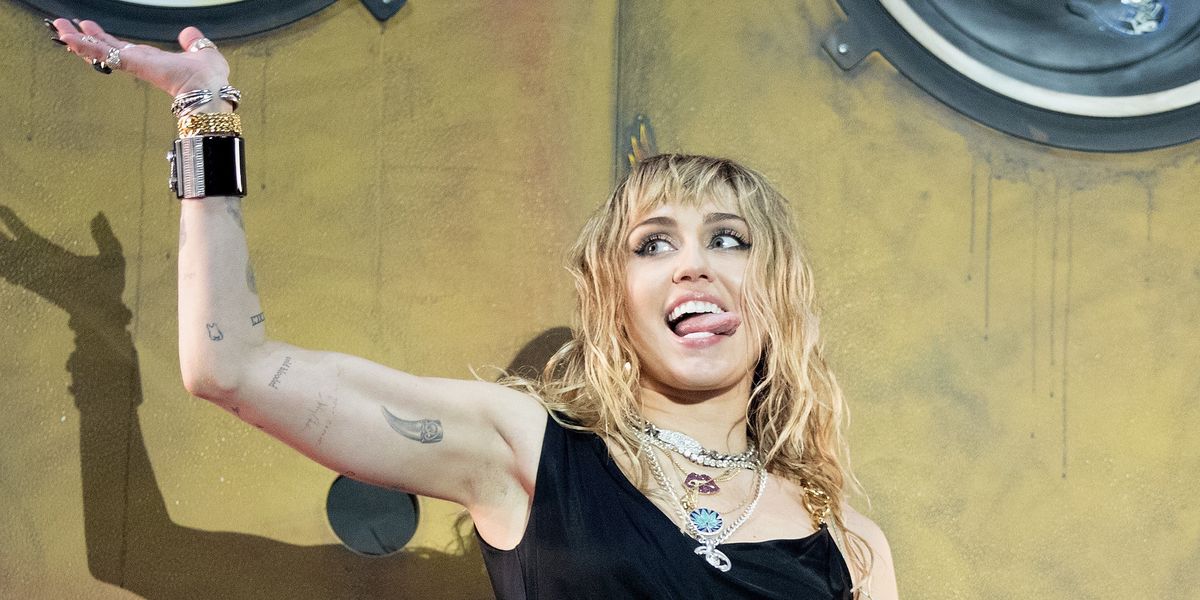 For weeks now, Miley Cyrus has warned fans that "She Is Coming," which is the new She Is Risen by the way. With what, exactly? New music, apparently — and yes, her much-hyped Black Mirror episode.

The singer performed several new songs this weekend from her latest musical era, her first since her 2017 Dolly Parton-endorsed country pivot, Younger Now. Among them, a pop-rap track reportedly called "Cattitude," at BBC Radio 1 Big Weekend. Its lyrics are kind of wild, and may appear on Cyrus' new EP, called, She Is Coming, which will be "everywhere" this week on May 31.

On the black-and-white cover, Cyrus wears a cropped T-shirt with the words "Never Mind the Bollocks," a reference to the Sex Pistols' only studio album. Leading up to the announcement, Cyrus has teased moving images of herself devouring fruit and also standing in front of trash bags, so it appears that for this era, visually speaking, anything goes.

During her BBC performance, Cyrus also debuted a few other new tracks that channel the Sex Pistols' rebel spirit: "Mother's Daughter" feels like a straight-up hard-rock banger, and "Dream" takes us back to her psychedelic Dead Petz days (remember?) with a "drugs rule everything around me" refrain. But "Cattitude," backed by propulsive drums and guitars, sort of takes the cake for us, what with its random cries of being "so nasty," a "rum-pum-pum-pum" moment recalling one Missy Elliott classic, shouts out to Nicki Minaj and Cardi B, and, literally, Beyoncé. (Cyrus legit yells the superstar's name on stage several times, as if invoking the Holy Spirit. Why, we don't know, but carry on!) There is also an... interesting lyric that goes, "You're just mad 'cause your hair is flat/ Mine's not." Okay!

On Twitter, the song is believed to be an anthem of female empowerment by the known cat lover and animal rights activist. We'll see this week if "Cattitude" and the other new live tracks make the cut for She Is Coming. I for one, hope Cyrus keeps the Beyoncé hollers in the studio version. Meantime, fans are already creating their own #SheIsComing album covers to stave off heated anticipation.