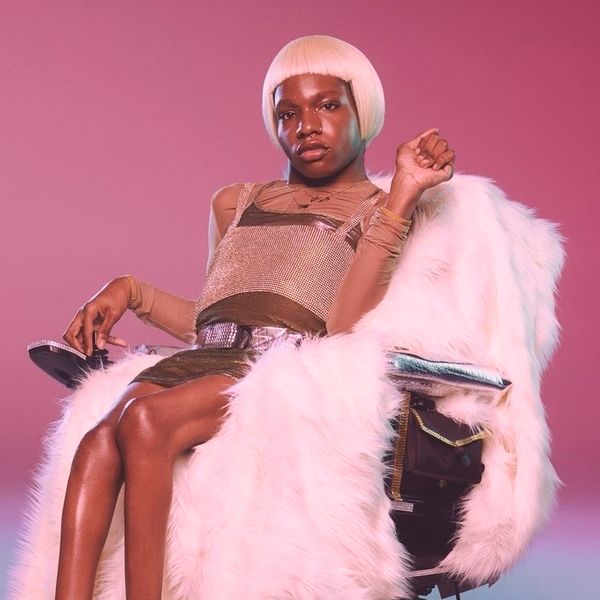 This past June has been very kind to model, Aaron Philip. She made her runway debut closing out designer Willie Norris' fashion show and rounded out the month with her first cover for a major publication with an interview by none other than the trailblazing supermodel, Naomi Campbell, to kick off our PAPER Pride series. And now she can add "stars in a music video for Miley Cyrus" to her growing, already impressive resume.

Philip appears alongside a cast of diverse women, femmes, and nonbinary individuals in Cyrus' new video for "Mother's Daughter." The lead single off of Cyrus' new EP, SHE IS COMING, the track is definitely one of its tamer cuts, compared to other auditory oddities like the polarizing "Cattitude," that renews the singer's political commitment to female and LGBTQ+ empowerment. In true Cyrus form, the visual for "Mother's Daughter" eschews any inclination towards subtly in favor of making sure Cyrus' message is heard loud and clear.

Between shots of Cyrus wriggling around in a red latex bodysuit reminiscent of "Oops!... I Did It Again"-era Britney and resting her head on her actual mother Tish Cyrus' shoulder, messages like "tough titties" and "not an object" flash across the screen in Clockwork Orange-like fashion. Going even further, the video for "Mother's Daughter" features an intersectional cast that includes the likes of trans activist/singer/model Casil McArthur, wrestler Amazon Ashley, plus-sized model Angelina Duplisea, and queer skater Lacey Baker.

#MOTHERSDAUGHTER @mileycyrus thank you miley. i love you so much. what a phenomenal video. not enough words to en… https://t.co/DKT4WW9ski
— aaron philip (@aaron philip)1562076344.0

"As a Black girl in a wheelchair who happens to be trans — I just want to have a good life and do good in whatever my endeavors consist of, regardless of what that might mean in the face of oppression," Philip said in a statement she posted about the video. "I do not identify or label myself as an activist, but that's just because I care -- and I think everyone should, activist or not. I fight for my freedom by being myself."

Watch the music video for "Mother's Daughter," below: