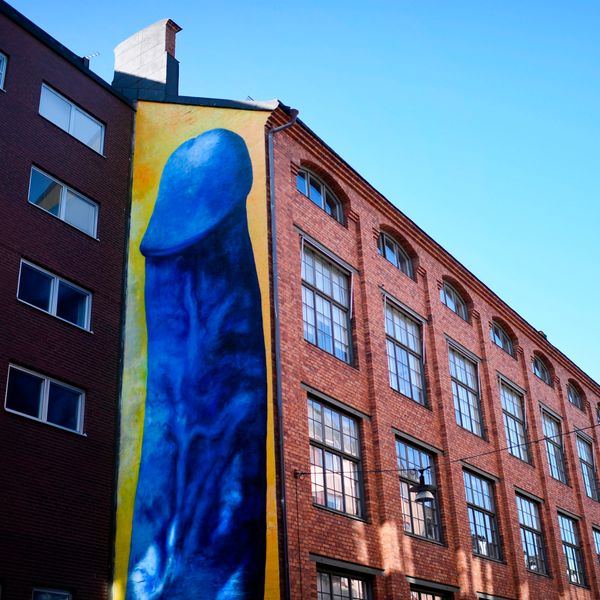 Talking Censorship With the Man Behind These Four-Story Penis Murals

New Yorkers are famous for their devil-may-care attitude. We are unperturbed by public urination, brave smelly subway stations, and are unfazed as rats dash across our path, priding ourselves on our resilience and live-and-let-live liberal attitude. There's not much that can shake us, but a four-story dick erected in the Lower East Side? Well, that might just do it.

Swedish artist Carolina Falkholt finished her phallic masterpiece on Christmas Eve, with the ginormous mural originally intended to remain for a few weeks. However, it only lasted three days. Last month, Falkholt created the same piece for a wall in Sweden, and was similarly censored. While Manhattan pedestrians certainly found the painting impressive (and members of the press arrived en masse), complaints poured in from building inhabitants and neighbors, and Milan Kelez, the man who commissioned the work (and its muse) was forced to have it removed.

But Kelez is no stranger to virality. The 33-year-old Peruvian and co-owner of West Village hotspot Baby Brasa is the man behind The New Allen, a public art project that works alongside realtors to connect street artists with sponsors and walls. It's also responsible for New York's most-Instagrammed mural of 2017. Kelez, a former wall painter and set designer himself, has an unparalleled passion for street art and believes the bolder the better, but even he couldn't have predicted just how far Falkholt would stretch her artistic license, nor the public's reaction to her anatomical interpretation.

PAPER asked Kelez to weigh in on why we can't take dick.

What's your personal relationship to art?

Just a fan. I'm a big fan of street art. I mean, I love contemporary art. Banksy really inspired me because how he communicates creates conversation. There are some fun light pieces; mostly I try to always have a positive impact on the community with the artwork, but also give the artist freedom.

So The New Allen is a passion project?

It's like a passion project. The fun thing is, some of the walls, especially the ones that are street level, I like to rotate. So I'll have an artist for three months and then another artist. "I feel you baby," by Baron Von Fancy, was the number one most-Instagrammed mural in New York last year.

What do you think makes the most Instagram-able mural?

With "I feel you baby," I think it was because it was positive and could mean whatever you wanted. It immediately translates like, "I feel you, I understand you, I'm empathetic with you," but it also eaves it up to the imagination. So I guess that phrase made a great mural because of that. You have to be with the times and you have to be with the moment. A great, Instagram-able mural is bold and accessible.

It must also raise the profile of the building itself.

That's correct. So it's a win-win in any way you see it. Street art is one of the strongest emerging forms of art in the world right now — it's super well-respected. I think we did a really good job at bettering neighborhoods, [in some parts] there are over 20 murals on just one street.

Is there any censorship process?

Often we will go through the making sure everyone's cool with a sketch before running with it, but I had a couple of incidents where I gave freedom to the artist and the themes were a little bit offensive to some people, so we removed it right away because that's not the purpose.

I take it the penis mural was one of those incidents. When you first saw it did you think, This is going to stir some people up?

Yes, of course it was a little bit of a shock. I left Carolina to paint it and when I got back I didn't know it wasn't going to be abstract, because that's majority of her work. So I knew there was something coming.

How was it for you navigating that backlash?

I'm very much a peacemaker. It's not in my nature to be confrontational. So it was very uncomfortable, and I was pulled between all these places. I just try to understand every point of view.

It's strange because New Yorkers are not only so liberal, but have seen so much of everything that you'd assume they couldn't be shocked.

It was a shock to see the mural because in itself it's something you never seen before. It's funny when you go to a high school or public bathroom and people have drawn tits and dicks. For me it was obviously shocking but also funny, but families were put in that uncomfortable situation to speak to their children about the mural. The artist stands by her work and was very offended that the piece was taken down because she says there should be freedom of speech. Like if you're not comfortable talking to your children about what a penis is, which is a body part. But then again, you can probably see a pair of tits on a wall and it stays there, but a dick made people talk so much.

She also has a vagina mural up in LES, which was allowed to stay. It's interesting that a penis depiction was considered more confronting.

It's very interesting in the end to see the reaction of people and the conversation that it stirs. It really hit a nerve to the public, so in that sense it was successful. Then the artist did the same thing in Sweden; she got permission to re-erect — "the resurrection of the erection," as I like to call it — and it was approved by these people in Sweden, but there was the same reaction. Swedish people were a little bit more politically correct; they went to her and said, "Listen, we appreciate your art, but we have to let you know that it can only last 10 days." That tells you the society we live in today is not ready to look at this yet and it makes them uncomfortable to face a piece of public art that portrays an erected penis. They find it pornographic. We are still shedding off the years of religion. We're on that verge, now that we've lived through the whole technology revolution.

Where do you see the intersection of politics and art in society? Is it important?