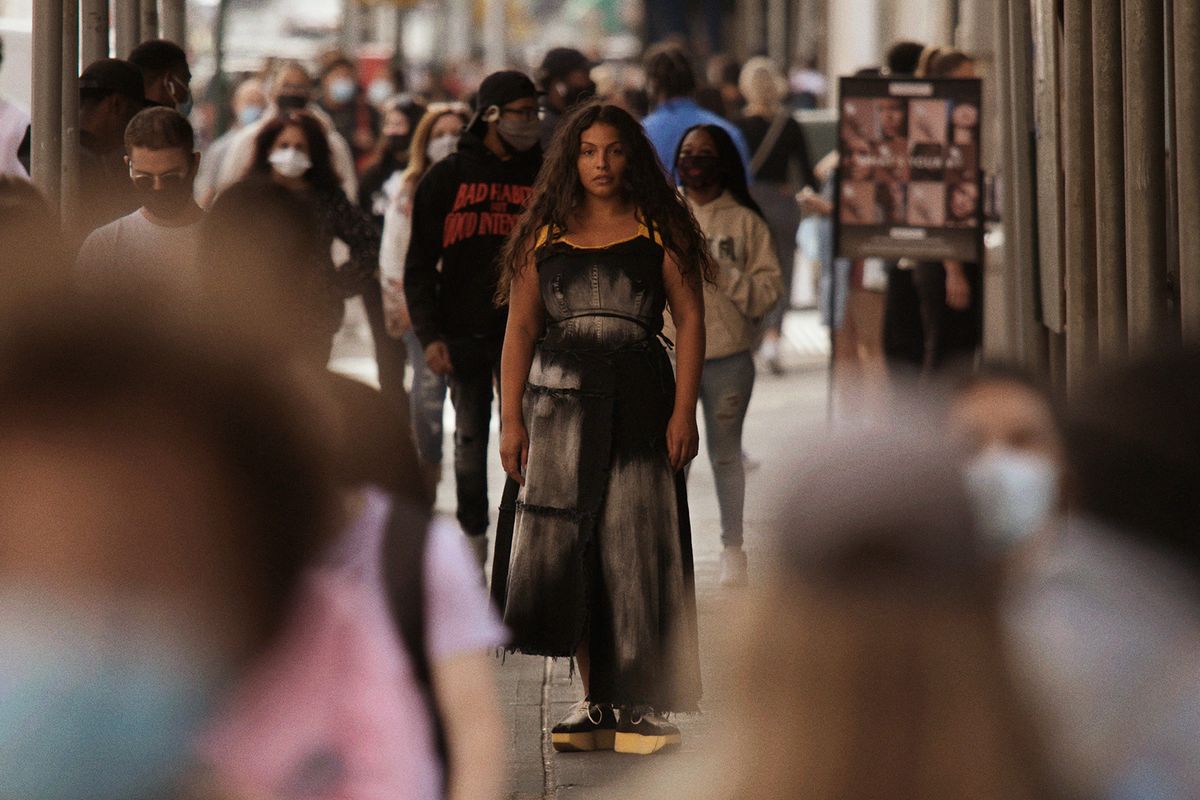 All the Happenings You Missed From Milan Fashion Week

Amid the restrictions of the COVID-19 pandemic, this season's Milan Fashion Week took an entirely new path with a masterfully reimagined, mostly digital format. Italy's fashion houses turned to full-fledged video productions and never-before-done online debuts, while a few still held sparsely attended live shows. Between documentary-style films and TikTok live-streams, peruse the highlight from the one-of-a-kind week, below.

Furla gave us a glimmer of hope for the retail world with the unveiling of a new-and-improved flagship store on Piazza Duomo in the height of Milan Fashion Week. Conceived by David Chipperfield Architects Milan, the two-story storefront celebrates the brand's Bologna heritage with recurring arches and a grand, sculptural staircase.

"We are proud to unveil this new exciting project in such a complex moment. We wanted to communicate a message of optimism and resilience since we think that, despite the current difficulties, the world of physical retail will continue to be highly relevant for a brand like Furla," said Furla president Giovanna Furlanetto.

Along with the brick-and-mortar revamp, Furla launched its Spring 2021 collection, and the renovated Miss Mimì bag is certainly the standout from the range. Arriving as a tote and a crossbody in two sizes, this season's staple Furla accessory boasts a classic, chained metal clasp in an array of upscale colorways atop matelassé nappa leather.

A-COLD-WALL* shared an interpretative take on the way we live — and dress — in today's new world through a specially conceived short film, titled "My Brother's Keeper." In three acts, Creative Director Samuel Ross redefined the label's traditional codes of style. Act One explored isolation at the pandemic's conception — movement was blurred and models faces were indistinct, while signature shades of slate and taupe dominated the first level of Spring 2021 designs. Next up, Act Two highlighted a refined self-expression — an effervescent yellow controlled the spectrum, symbolizing the jolt of hopeful energy once people started to trickle back into the working world. In the final installment, Act Three gestured to the future, placing matured, monochrome menswear ensembles and relaxed formalwear at its center.

"This season more than ever before, it felt important that A-COLD-WALL* be hyper-responsive to current circumstances," said Ross in a statement. "This collection is the result of a sincere and honest dialogue about these changed priorities – it's democratic, it's adaptive. It's what people want to live in now."

Veronica Etro was one of only a handful of Italian fashion labels to host a physical show in Milan this week. Guests gathered among lemon trees in a warehouse — a last-minute relocation from the gardens of the Four Seasons Hotel due to rain — and Etro showed a collection inspired by Italy's most prestigious summer spots.

Amid the plethora of statement silhouettes, boat-ready knits and Bermuda shorts completed an at-sea look, perfect for a yacht day off the Positano port, while silk button-up dresses and '90s inspired beachwear were ideal for an evening Amalfi dinner. Gold jewelry elevated most vacation-inspired looks, and a fierce Ashley Graham commanded the runway in an open-skirted, black silk dress reminiscent of the country's most famed style icon, Sophia Loren.

Instead of holding a socially distanced runway presentation, Marni creative director Francesco Risso opted to show his latest range through a global lens. During a time of great social and political divide, the designer united a worldwide community of creatives for a 15-minute documentary-style film, titled "Marnifest."

"This one is not about the clothing, And yet it is all about the clothing," said Risso, who is heading into his fifth year at the helm of the Milan fashion house. The designer enlisted 48 artists and talents from London to New York, and all the way to Shanghai and Dakar, to sport the collection as they went about their everyday lives. Yves Tumor, Mykki Blanco, and Moses Sumney — to name a few — explore their respective cities, shopping for groceries, riding in taxis, and grabbing food at night, all the while boasting Marni's Spring 2021 collection.

The range is rooted in unified upcycling with reconstructed, archival silhouettes; statement-making skirts arrive asymmetrical with billowing tulle, while vests are collaged together to create fluid bodycon dresses that pair well with oversized outerwear, taken directly from Marni's previous collections. "This one is a collective effort," Risso said. "The 'I' that's been traditionally associated with the narrative of fashion turns into a 'WE.'"

Dsquared2 creative directors Dean and Dan Caten looked back to one of their brand's founding pillars for Spring 2021: sharply-executed tailoring. Through a video lookbook, the duo presented both men's and women's iterations with a punch of punk, revising traditional cuts to appeal to their rebellious clientele, in a collection called "Tailored Punk." Most notably, both lines called on military design — a clear nod to the punk movement's street uniforms in the '80s and '90s — with a modern twist.

Oversized nylon jumpsuits, similar to designs worn by fighter pilots, boasted elongated, hanging zips and clunky add-ons, while the same utilitarian, harness-embossed aesthetic made its way into several other statement pieces across both collections. In stark contrast to the bold exaggerations, refined tailoring provided a cohesive finish to the range — for men, fitted white shirts paired with minimal, black pants provided a sense of sanity, and for women, black, form-fitting dresses echoed a heightened sense of femininity.

BOSS took a social-media-first approach for its Spring 2021 presentation, live-streaming the entire fashion show on TikTok from the Palazzo del Senato in Milan. Utilizing the GEN Z-infested platform as a vessel for digital traction, the German label is targeting a younger audience this season with a mood-lifting, vividly hued range, titled "Moment of Renewal."

"TikTok is an exciting and challenging new platform that we have been experimenting with for some months now, and we can't wait to see what we can achieve together next," said Director of Global Marketing and Brand Communications Lüder Fromm in a statement. "Reaching Generation Z and digital natives with a social-first approach is a key component of our marketing strategy, and we are totally committed to this new direction for the brand."

BOSS transformed the Palazzo del Senato into a concrete jungle — mixing trees (which will all be donated to the city of Milan) with the centuries-old, columnar architecture of the space. Grasping inspiration from London artist William Farr, who fuses elements of nature with salvaged objects in sculpture, BOSS incorporated embroidered, all-encompassing floral designs and metal eyelet detailing into the label's staple frames.

"I already got a lot of inspiration from Pucci designs, especially colors and color matching," the designer told Vogue. "I really love how Pucci uses colors, I feel like it's all harmonized. That's the biggest thing I got inspiration from with Pucci."

Salvatore Ferragamo's outdoor presentation commenced with a short, thrilling film, directed by Luca Guadagnino. Shot on the empty streets of Milan, models are visibly on edge, clutching their heavy handbags for comfort, neurotically looking over their leather-embossed shoulders, and staring intently through their tinted Ferragamo sunglasses. The suspense was real, and that was intentional. Creative director Paul Andrew looked to Hitchcock's greatest works for sartorial inspiration — ensuring that his own depiction of a fashionable day in lockdown exuded that same sense of apocalyptic oddity.

"This spring, stuck at home, I rewatched classic Hitchcock, in particular Marnie, The Birds and Vertigo," said Andrew in a statement. "In the past, watching those movies has always felt like inhabiting a surreal and strange world. But watching them during lockdown was different: they felt like "real life" because "real life" itself had suddenly become so strange, surreal and oddly beautiful. There are several direct homages to key Hitchcock moments in the collection, and the collection echoes that gorgeous, hyper-real level of colour saturation that is so evident in the beautiful Technicolor masterpiece that is Vertigo."

Vincenzo Palazzo drafted VÌEN's Spring 2021 collection while on lockdown in the countryside of Putignano, where he grew up in Apulia. Amid the world's upheaval, the designer found solace in music, particularly alternative rock of the mid-Nineties from the likes of Katy Newcombe, Hope Sandoval and Kim Gordon, all of which he listened to as a teenager.

Following suit, the collection exuded a fascinated-yet-rebellious character —bombers and coats were fierce with dainty touches of knit, while patchwork dresses contrast military-like pants and shorts. Closing out the show, Palazzo included a white t-shirt with the famous, heart-warming words of John Lennon: "Everything will OK in the end. If it's not OK, it's not the end."

This season, the team at MM6 Maison Margiela captured the creative process of putting together a lookbook with a behind-the-scenes short film depicting models and staff at work. The spring collection, which was designed by a collective remotely, reflected some of the world's new realities in the wake of Zoom meetings and at-home work uniforms.

"The popular adage of 'business on top, party on the bottom' is pertinent, as subversive ensembles are optimized for video conferencing, daydreaming, and the new 9-5," read the show notes. Elsewhere, the backs of T-shirts and vests are attached with large satin scarves that are printed with a variety of backdrops from cloudy skies to the brand's library signature '6' motifs.