Mike Osterhout, as Irascible, Iconoclastic and Idiosyncratic as Ever, Returns to His Roots 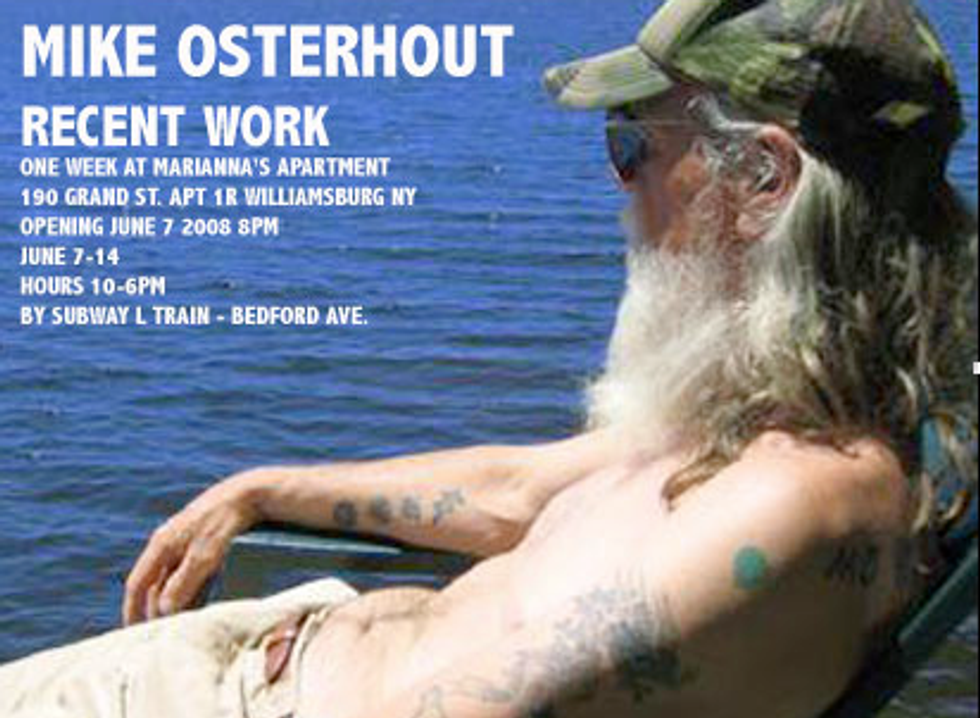 While we fathom further fictions from our past, trying to cozy up a new wave of Lower East Side galleries to the recent glory days of the East Village and the greater downtown legacy when art was produced and not just displayed here, the brief return of Mike Osterhout to this city offers one of the more irascible, iconoclastic and idiosyncratic figures for us to understand the cultural freak show of yore. Back in those economically impoverished times when any hoodlum with two wooden nickels to rub together could hang a gallery shingle on a storefront and peddle art like some carnie patent medicine salesman, Osterhout opened Mo David Gallery helping to usher that peculiar brand of wild and witty Bay Area Conceptualism to these shores. It was in the degenerate milieu of the East Village however that this artist transformed the archly radical gestures of his performance work into a social template for collective mayhem, founding the Church of the Little Green Man, where congregants burnt dollars for entry into a roving pagan temple (housed variously in long defunct local nightclubs, stripper joints and the now venerable bar Max Fish) to watch myriad marginal luminaries like Karen Finley and Kembra Pfahler enact their own transgressive rituals. And if you have any doubt about how weird that time truly was, consider that for many of those years Mike Osterhout was a regular contributor to PAPER magazine, proffering a monthly column on spiritual matters for a godless readership.

A decade and a half since Reverend Osterhout abandoned his New York flock to undertake his ambitious life-as-art project of fully restoring a disused historic country church up in the Catskills, it turns out this enigmatically unpredictable visionary did not forego his studio practice. Beyond his ongoing work rebuilding the oldest church in Sullivan County, heâs made an oeuvre out of the carcasses gleaned from his mystical practice of game hunting and transferred that most urban aesthetic of transforming the scavenged detritus of our world into art, and promises here to show his most recent work of collage paintings along with a new uncategorifiable masterpiece -- a house for sale as art. Better yet, the artist will inhabit the void he left behind, returning -- albeit to the subsequent art-ghetto of Williamsburg -- for a week to make art and hold court. Now a wooly and grizzly old man of the mountains, Mike Osterhout remains ever more a man of unconventional wisdom and unorthodox experience. At one time students paid good money to attend his Old School for Social Sculpture in a dilapidated former one room rural schoolhouse up north, but in the great tradition where the best art is not what is sold but what canât be given away, hereâs your chance to hold him in captive audience for the mere price of a bit of your own sanity. As difficult as his art, the prodigal son has at last returned and the path to enlightenment is a mere subway ride away.