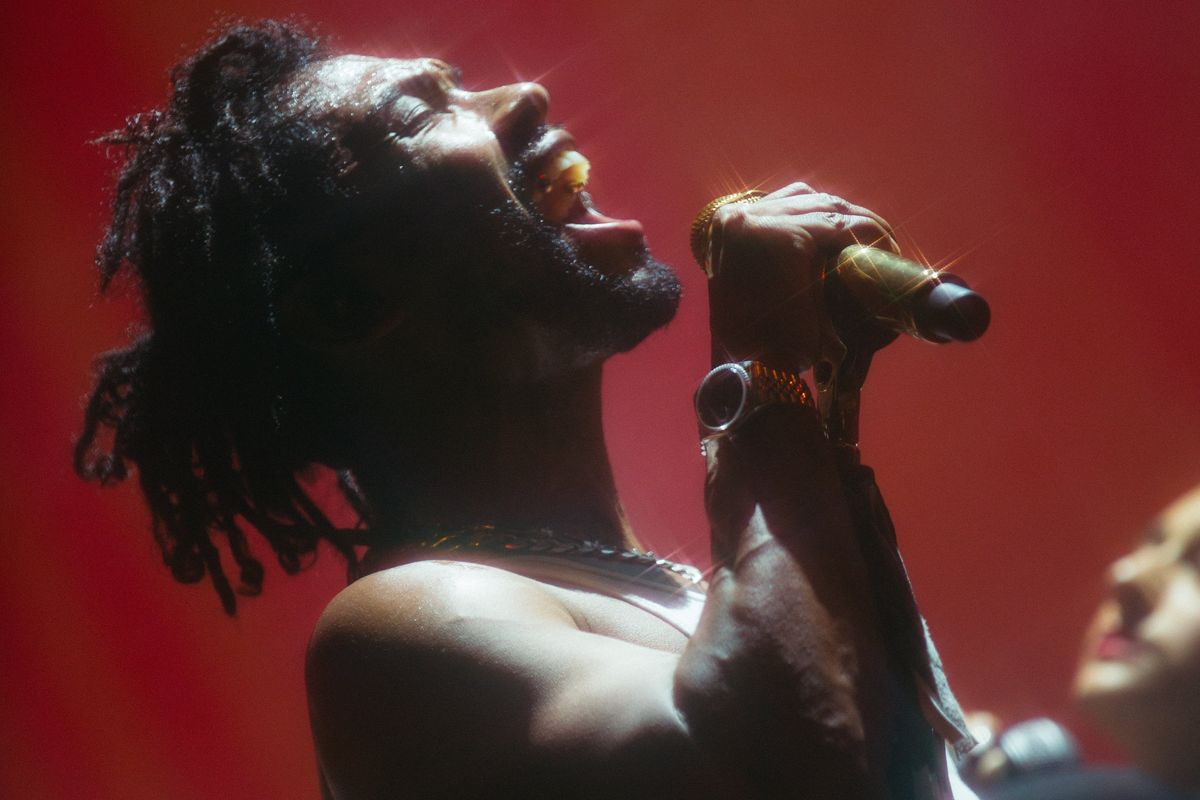 Wednesday, September 19 marked the hometown leg of Grammy-winning R&B singer Miguel's multi-city Ascension tour. Roughly two hours before doors, a handful of fans and journalists gathered in one of the venue's dressing rooms to take a swing at learning the basic mechanics of transcendental meditation. Engulfed by the scent of lavender (courtesy of an army of expensive looking candles), with a smattering of ambient light casting a subdued glow, Miguel shared how meditation had become a central part of his life and creative process. "I discovered meditation because of the Beatles," he told PAPER.

"I was listening to Sgt. Pepper's Lonely Hearts Club Band, and on Spotify or Pandora random facts about the artist you're listening to pop up. I read that they had been doing a lot of meditation during the time they made the album. I had also seen a documentary about how they were spending time with the Maharishi — he became their spiritual advisor. At the time, I was trying to figure out what I wanted to do with my next album which was Wildheart. I just thought if that [Sgt. Pepper] was what they created after meditating, what can I make? So I started doing it — sometimes guided and sometimes quiet meditation with myself — and it really helped me focus on what I wanted the album to be about; it gave me a lens to see a clear picture of what was happening in my life."

The influence of '60s counterculture and the new-age explorations of spirituality inherent to the time are embodied in the free-wheeling, psychedelic soundscape of Wildheart. It's an energy that is further cultivated in War & Leisure, Miguel's latest album, which the current tour supports. Though it is the most overly political project he has released to date, the dichotomy between the exploration of today's social issues and the album's more voraciously erotic selections is not as vast as one might be tempted to perceive. Artists of a similar vein — Lenny Kravitz, James Brown, Jimi Hendrix — have proven that a willingness to treat music as a vehicle for cultural commentary ultimately serves to cultivate a rare perception of both potent virility and moral fortitude in the public consciousness.

Watching Miguel step onto stage, sporting a shirt reading "Legalize Ascension" and flanked by a trio of gyrating dancers in monochromatic leotards, it felt natural to align him within a legacy of sexualized political expression. "Ascension is all about transcending the limitations you choose to acknowledge," he shared with the audience late in the evening, having run through crowd pleasers like "How Many Drinks," "Drugs," and "Come Through & Chill." Yet it was the debut of a new single titled "So I Lie" that drew one of his most personal confessions. "We have so much pressure to put up a front. We're always watering ourselves down, and I think the moment we lose the truth is the moment we lose communication," he explained of the song's inspiration. This sentiment, though more broadly expressed in "Why I Lie," echoes the core message of his 2015 single "What's Normal Anyway." The Pop & Oak-produced track sees Miguel unpacking how his mixed race identity (Mexican and Black) impacted his interactions, and at times made him feel as though he had to switch between communities to fit in.

Prior to performing "Now," which he described as one of his favorite songs, Miguel again paused to address the audience, this time about the importance of empathy. Making reference to the Flint water crisis, Puerto Rico, the Black Lives Matter movement, and increasing xenophobia toward Latinx immigrants, the singer called for more compassion and more action to incite change. It should also be noted that an ear toward hazy, funk-centric production and sex-soaked lyrics a la Prince seem to be a family trait. The tour's opening act, Nicholas Pimental (known as Nonchalant Savant), also happened to be Miguel's younger brother. Canadian alt-R&B duo dvsn followed his set, running through a litany of original songs including "Morning After" and "Too Deep" before ceding the stage to the man of the hour, Miguel.