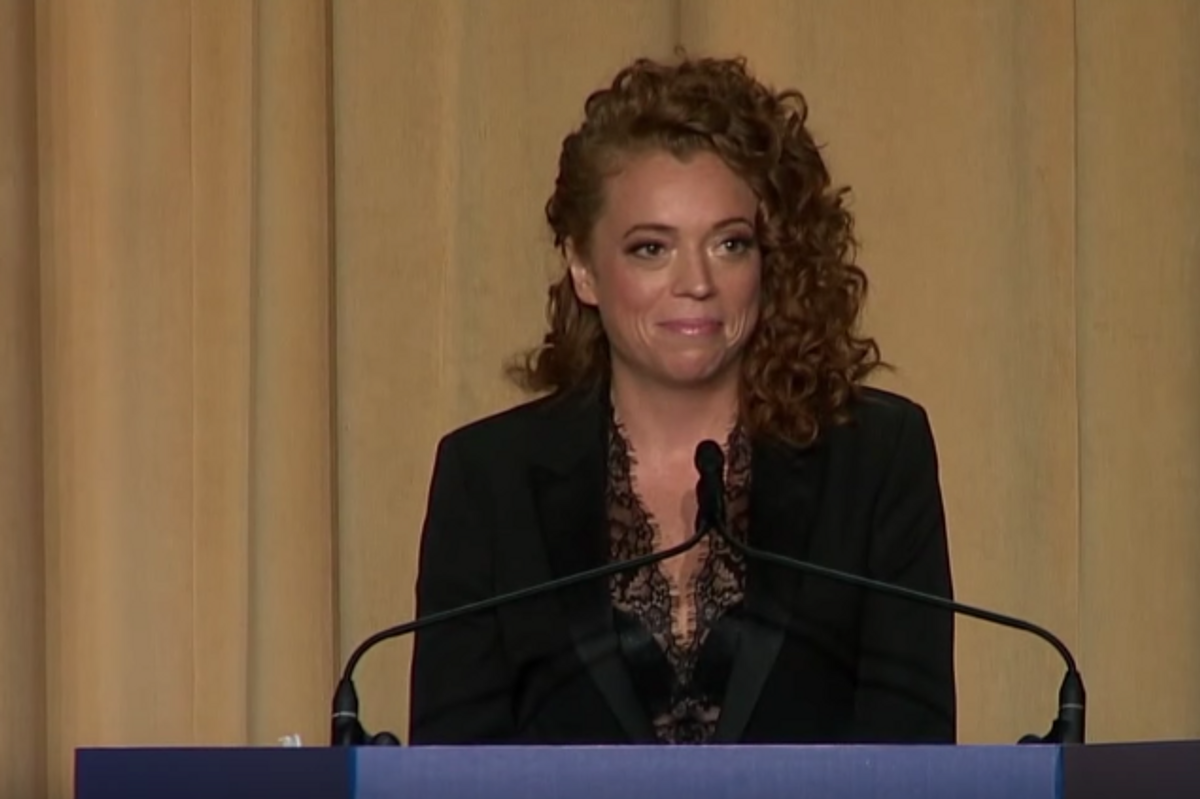 Over the weekend, about 3,000 journalists, politicians and "random plus-ones and curious hangers on" attended the "not quite A-list" annual White House Correspondents Dinner, per the Washington Post. For the second year in a row, Trump did not attend the event bringing together the fourth estate and the political class it covers, opting instead to give a speech about building up "the wall" and our nuclear weapons stockpile to a crowd of cheering supporters. At the dinner, comedian Michelle Wolf gave the big speech of the night, which the White House Correspondent's Association has now apologized for.

In the below video, you can see the assembled audience looking at times extremely uncomfortable with Wolf's set, which touched on everything from the Flint water crisis, to giving teachers guns, to the flaws of mainstream media, to Mike Pence and abortion, to Donald Trump's on-going porn star scandals. Which is to say, Wolf did exactly what she was there to do by holding the powerful accountable to those they serve through humor. The WHCA described Wolf as failing at a very different "mission" in its apologetic statement, however, writing, "Last night's program was meant to offer a unifying message about our common commitment to a vigorous and free press while honoring civility, great reporting and scholarship winners, not to divide people. Unfortunately, the entertainer's monologue was not in the spirit of that mission."

Wolf's set reminded us that no matter what she could possibly say at that podium, the actual president of the United States has already said worse. Wolf was accused of failing to read the room, but her acerbic and at times vulgar commentary was a perfect match for the brutality of the times. "The president of the United States is apparently the one pussy you're not allowed to grab," Sanders said to a roomful of groans, adding, "He said it first. Yeah, he did. You remember? Good." It's also highly unlikely that she didn't feel the frosty reception to many of her jokes. In fact, that palpable discomfort should have been an indicator to everyone that she was on the right track.

That there was bipartisan consensus that Wolf's jokes about press secretary Sarah Huckabee Sanders were somehow beyond the pale is both unnecessary and wildly misleading. (After all, Wolf said Sanders' smoky eye, created from the ashes of burned facts, is perfect). Are we really to believe Sanders, sitting in as a virtual proxy for the president, is so fragile that she was devastated by that joke? Meanwhile, as we obsessed over the propriety of Wolf's speech on Saturday, firing off tweets and churning out think pieces about the relationship in modern society of the comedian to the political class, President Trump was telling athletes at the Paralympic Games that their sporting events were "a little tough to watch." The Correspondents Dinner is already a barely relevant spectacle. Why apologize for the one person there bothering to tell her truth?