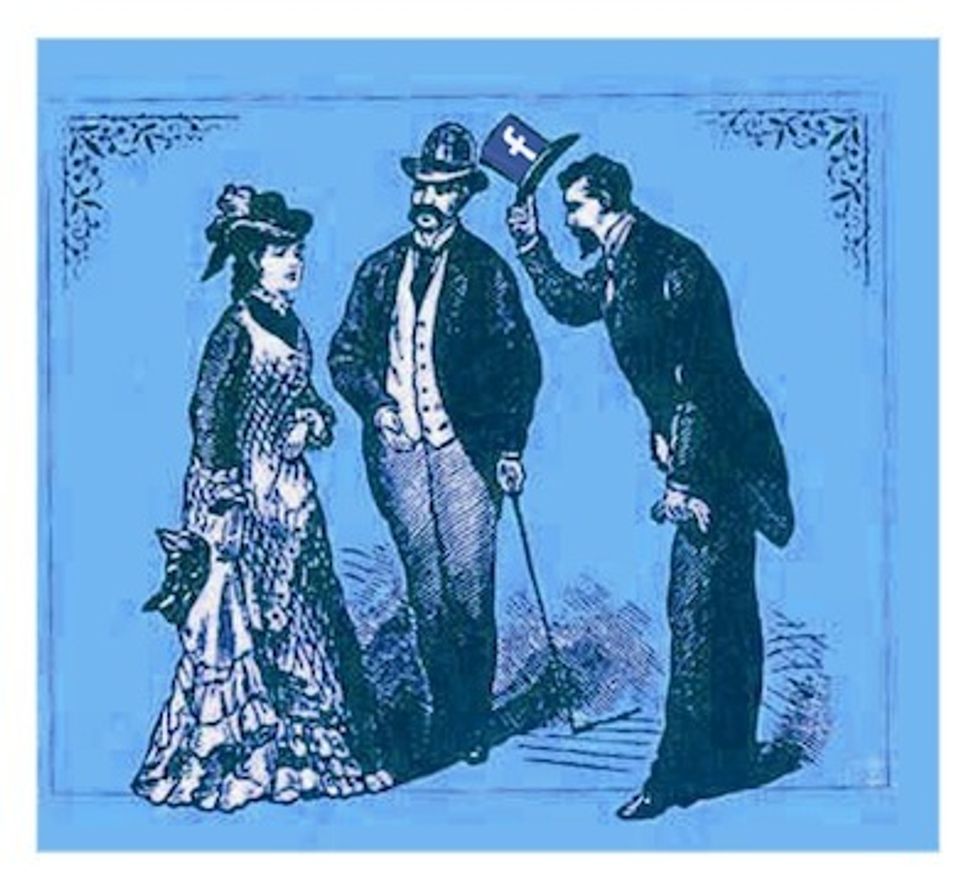 by Michael Musto
PAPERMAG
I hate to come off like one of those old biddies who insist on proper manners at all times, but sorry, nice behavior is actually a valuable way to show respect to someone who deserves it, and it's good karma too, because the lovely doings will come backatcha in spades. With social networking so prevalent, it's more important than ever to emphasize certain rules of behavior so you're not just some tweeting wild animal on the loose. Here are the most crucial regulations:

*Don't post something on someone's Facebook page that has nothing to do with them, unless you've gotten permission from them to do so. It's presumptuous and annoying and makes you the opposite of a friend. After all, I don't put my trash in front of your house. I can't stand it when people post a self promotional thing -- or worse, a totally nonsensical thing -- on my page. It's the kind of action that could get you unfriended pronto.

*Don't put a post on someone's page that does have something to do with them, but is negative. You promptly will get unfriended and/or blocked. It's a rude and obnoxious way to make your point. If you have a beef with someone, you can privately message them -- though that doesn't guarantee you'll avoid unfriending and blocking, I should add. But people have a right to consider their Facebook page their personal garden, which they can fertilize and weed at will. You can't control a lot of things in life, but you can -- and should -- monitor your page.

*Don't endlessly bother someone to post your Kickstarter campaign, unless it's for a life or death matter. Hounding them to promote your proposed documentary about tofu is abhorrent, especially if you've never even really met the person.

*Don't just put hearts or some other cute image on every single post. You will start to come off brain dead!

*Don't start criticizing a Facebook post without first reading the link that was included in it. And then try to say something nice about it before you launch into the criticism or you will get blocked.

*When I post my listicles ("10 sexiest movie stars", or whatever) don't immediately chime in that I "forgot someone." I didn't. I simply compiled my list of my favorites. Feel free to do yours, if you can get someone to pay you for it.

*If someone tags you on Facebook in a nice mention, the least you should do is click "like" on the post. A friendly comment or "thank you" would be even better. But you'd be surprised how many drag queens (and other people) just ignore such things and move on, as if they get so much good press all day.

*Don't just favorite a tweet. It really doesn't help much. Retweet it or just leave it alone.

*If someone emails you, answer them. Only pretend you never got the email if it's someone you truly want nothing to do with. But if you're hoping for any kind of long term professional relationship, it's de rigueur to actually respond.

*If someone uses your name in an email ("Hello, Darleen..."), use their name back ("Thank you, Bev"). Too many publicists write mechanical, inhuman "Got it" or "Confirmed" emails without taking two seconds to include a name.

*Oh, and would it kill you to send that "Got it" or "Confirmed" response when the occasion calls for it?

*If someone -- let's say a small 'zine that is desperate to interview you -- asks you to do so and you agree to do them a favor and book your time, they shouldn't then beg to reschedule the whole thing because they're just "too busy." Bad business!

*If a restaurant manager/owner spots me sitting at his/her place and comes up to me to start gushing and/or thanking me for a mention, the very least they should do is comp my coffee! Just one--it won't kill you!

OK, thank you for listening, and bye, Bev!